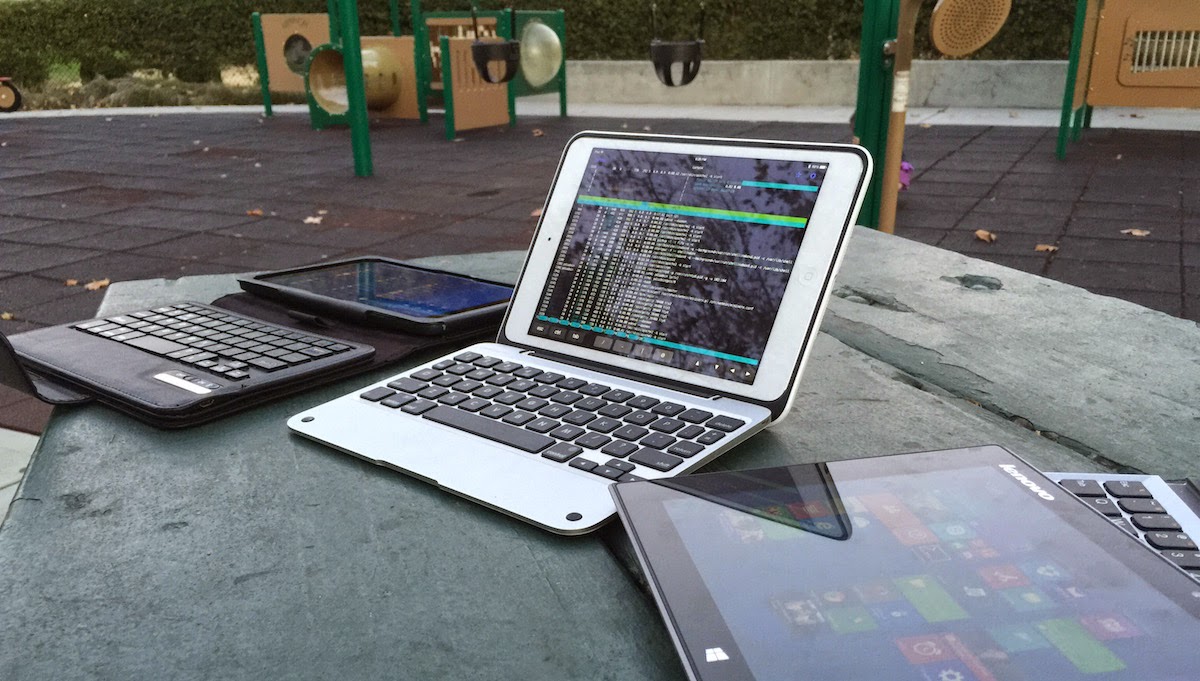 For the past two years, the iPad has gotten a lot of competition. Competitors are touting the benefits and the "cheapness" or running Windows 8.1 in a tablet form factor. Some of them are very cheap and very good. They promise to be your do-it-all, one single device. Obviously, the most serious one to date is the Surface line. Unfortunately, none of those devices are really good laptop replacements, the Surface Pro 3 included. Well, not good enough for me. I need the quad core i7 CPU, 16GB of RAM, dedicated GPU to run 27"& 30" monitors and I'm spoiled with Thunderbolt. Yes, Thunderbolt. I shuttle around 200-400 GB VM (VirtualMachines) so I spend quite a bit of time moving large mammoth files on and off RAIDs. I often run half a dozen CentOS Linux virtualized servers to simulate a clustered cloud environment. In short, I need my Macbook. I use it as a development tool to bring home money and work.

This isn't a Mac vs PC debate. If I didn't have my Macbook, I'd probably be running with the latest Thinkpad in a similar environment. The laptop I had before was a Thinkpad T420 with 16GB RAM and dual storage SSDs running Debian Linux. So unless a Surface 3 (or 4) has at least a high DPI 14"screen with at least 500GB of SSD, Quad-Core CPU and minimum of16GB RAM, I won't consider it as a daily driver. Besides running and developing for the cloud, I use Photoshop, Final Cut Pro, Motion, and Lightroom.

Hence, with my use case, I need a companion device rather than a 'replacement' device. A companion device should be disposable if you take it to a kids play area or romper room with 20-30 kids running around. When there is a likelihood of it getting stolen, lost or broken. That, to me, is a companion device. It should do things admirably without fuss for the most part. It won't be 100% nor 70% what you need but what it does, it does it well like have crazy good battery life or a rich ecosystem for whatever you are into. If you are into music, it should have good music apps. If you like photography, it should have rich apps in that area. Same for gaming. In my case, I need good connectivity apps for my work.

And this is where things fall apart. I tried and I tried. I started off with an ASUS T100, Dell Venue 8 Pro, and lastly, the Lenovo. In between, I even got myself a cheap disposable 11.6" Acer netbook. All of this mostly chronicled on this blog and I still have most of those things sitting around; collecting dust. Why? 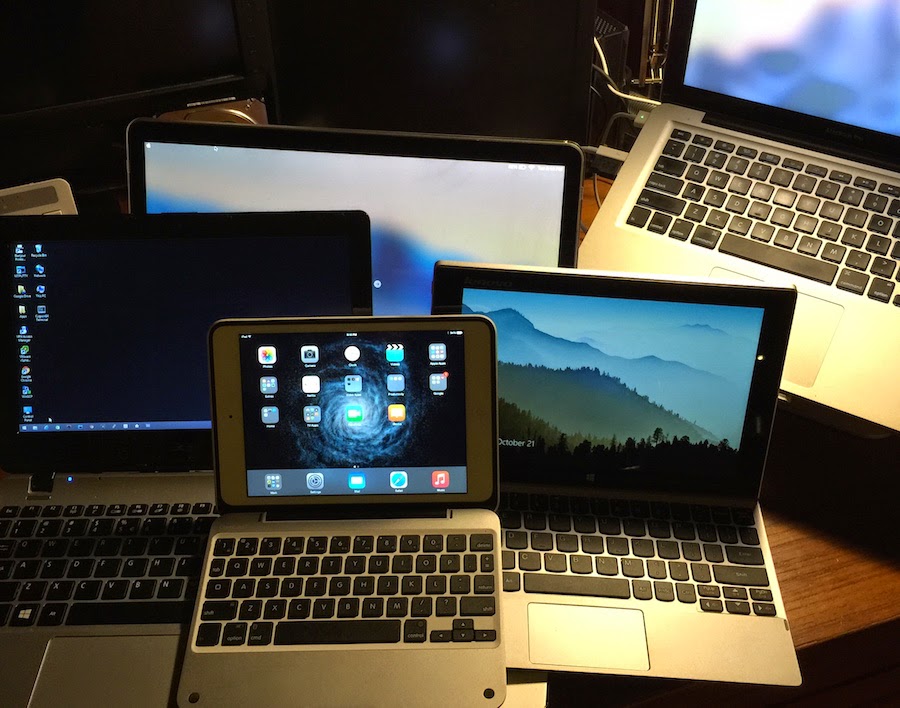 I think it boils down to this. A companion device shouldn't try to be the end-all device. You won't get a workstation class pc in a tablet form-factor in the short future. Desktop operating systems aren't designed to be touch friendly. Windows, in it's current form, isn't good for mobile touch.  Modern UI is actually good but the ecosystem is very sparse. I actually like Modern Internet Explorer and think it is probably the best mobile browser on the market. But that is it. Everything else pretty much stinks in the Windows App Store. In fact, I now only use my Windows tablets for Internet Explorer and NetFlix.
In fact, I get more done with my two Chromebooks than any of my current Windows machine. My Venue 8 sits on top of my night stand dresser and my Lenovo Miix serves as bathroom duty Sunday paper reader after about 2 weeks of initial use. They're used as cheap consumption devices because that is all they're good for now - cheap Netflix streamers! You can get a refurb Venue 8 Pro for $112. Until the app solution and ecosystem improves, I literally threw money away; chasing for the impossible. If I could easily install and run Linux on them, I'd at least replace my aging Chromebooks.

Now, people will tell you and tout the benefits of running the millions of legacy x86 applications on their Venues, Asus T100s and Thinkpad 8s. Yep, I tried that too. If you read earlier in previous blog posts, I even tried running Adobe Lightroom and VMware Workstation/VirtualBox on an 8 inch Windows tablet. Not fun.

Instead of taking a screenshot, I decided to take a picture. The high-res screen is indeed nice but it boils down the same problem. Touch doesn't work. I had to blow up my icons, DPI settings, font scaling and it still doesn't work. 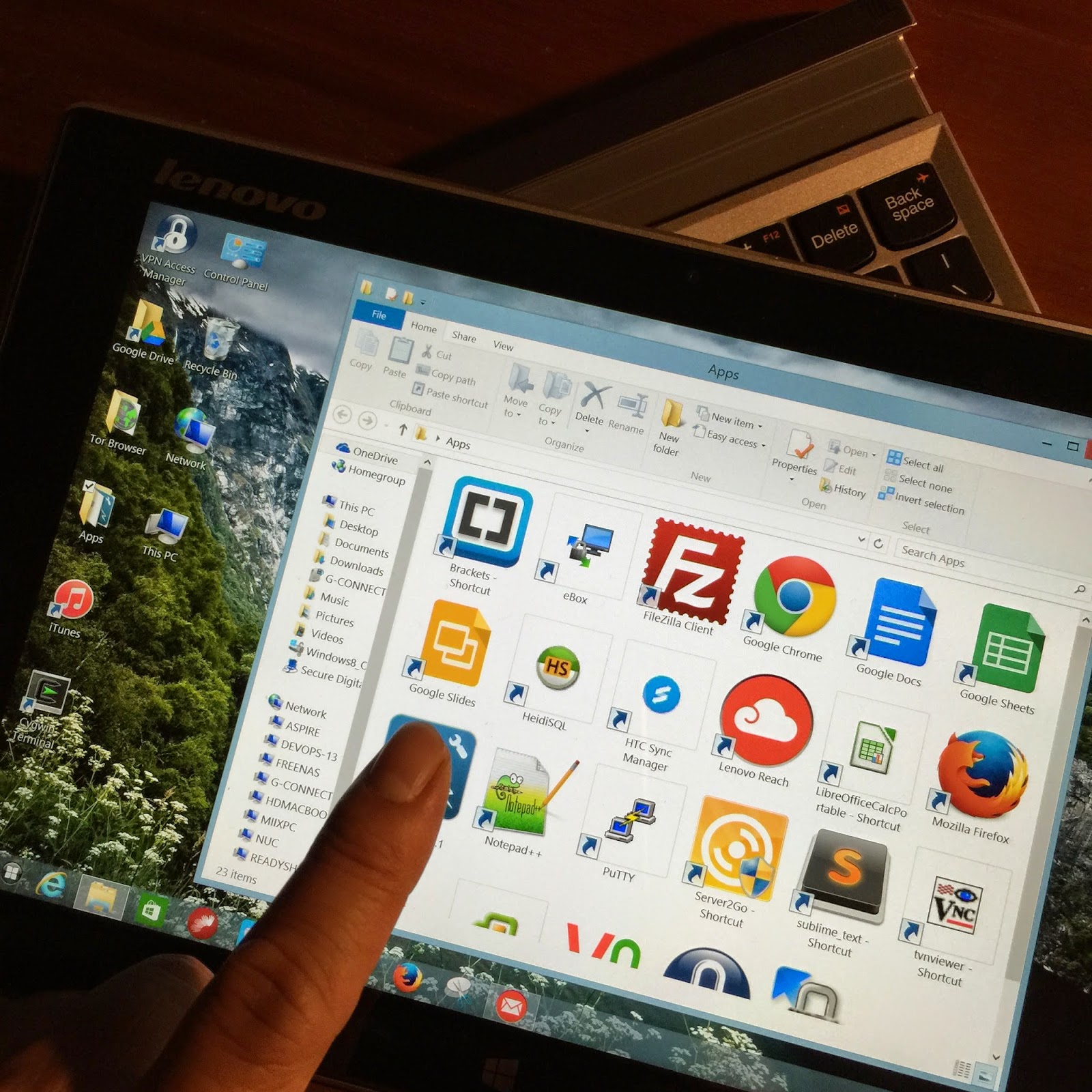 The supplied keyboard with trackpad helps but it defeats the whole purpose of getting a tablet. In the case of the Lenovo Miix, the keyboard is actually quite bad. Here on the Lenovo Miix, I am trying to query and edit a MySQL database using the popular Window's Client, HeidiSQL.

Oh man, I tried. I kitted out all my PCs with CyGwin. The Redhat Linux POSIX environment for Windows so I can have a BASH shell to run actual POSIX apps like rsync, iperf, and native SSH. I made an effort with PuTTY because all the Metro Modern SSH clients suck. I even had Shrewsoft VPN to access some servers in Japan but again, it was way too much work when I can have more sophisticated solutions with a simple click-away on the Apple App Store on my iPads. Things were just too jarring going in and out of Windows Desktop and Modern UI. Alt-Tab would cycle between apps within old Windows and Windows-Tab would cycle between Modern Metro Apps. It was really inconsistent. Browsing One Drive in the Desktop mode, I could apply and image into a wallpaper but I couldn't do that if I was in Modern UI mode. Yes, these are little complaints here and there but they add up.

The iPad is not perfect. Safari randomly crashes but it does get some things right.  Deep sleep hibernation works awesome. I could put away an Ipad for 4-5 days and still have charge. All of my Windows devices were dead within 2 days of no use in deep sleep mode. Next,  music playing in the background without pausing when the device went to sleep is another small thing I cherish. I would have my Lenovo stream music and due to Windows power saving modes, it would go to sleep and the music would stop. On an iPad, you can play for 8-10 hours straight with the screen turned off with little impact on battery life. People tout the benefits of OTG USB, micro SD cards, built in HDMI but those pale to issues of battery life and power management.

Then there are the apps. Are they perfect? No. You can't run a good Office on them and you can't run Photoshop. I actually think Pages and Numbers are good but I'll cede the argument to those who absolutely have to run their complicated Excel spreadsheets on an 8" tablet.

However, there are so many good apps on iOS, that I can get actual work done. For example, I use Prompt as my SSH client. I can easily sync my servers and keys across multiple iPads and iPhones I have. On Android, you could use something like Juice SSH. On Windows 8, nothing.

I can easily access MySQL databases without hassle. I can make JOINS and do fancy queries all day long while my kids are running around the grass. 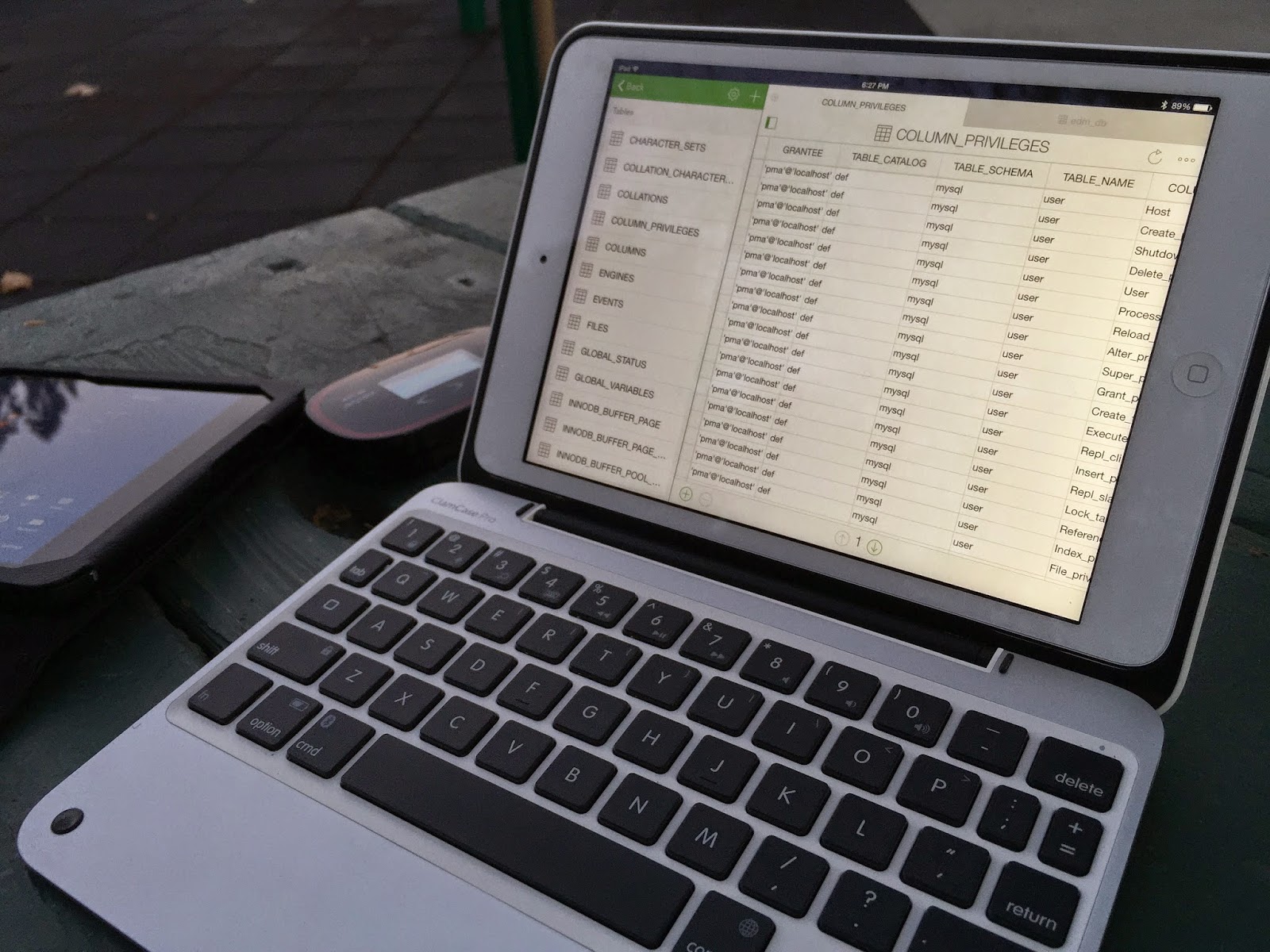 Logging into a remote VPN in Japan to transfer files, well, it just works. I can easily log into a client's server to see why his FFMPEG transcoder crashed and restart it.
I am starting to appreciate the simplicity.

I was actually getting work done. I can fix a back-end Excel parser I was working on. This is part of a web app that generates real charts in Excel from a web backend database.  Real work. 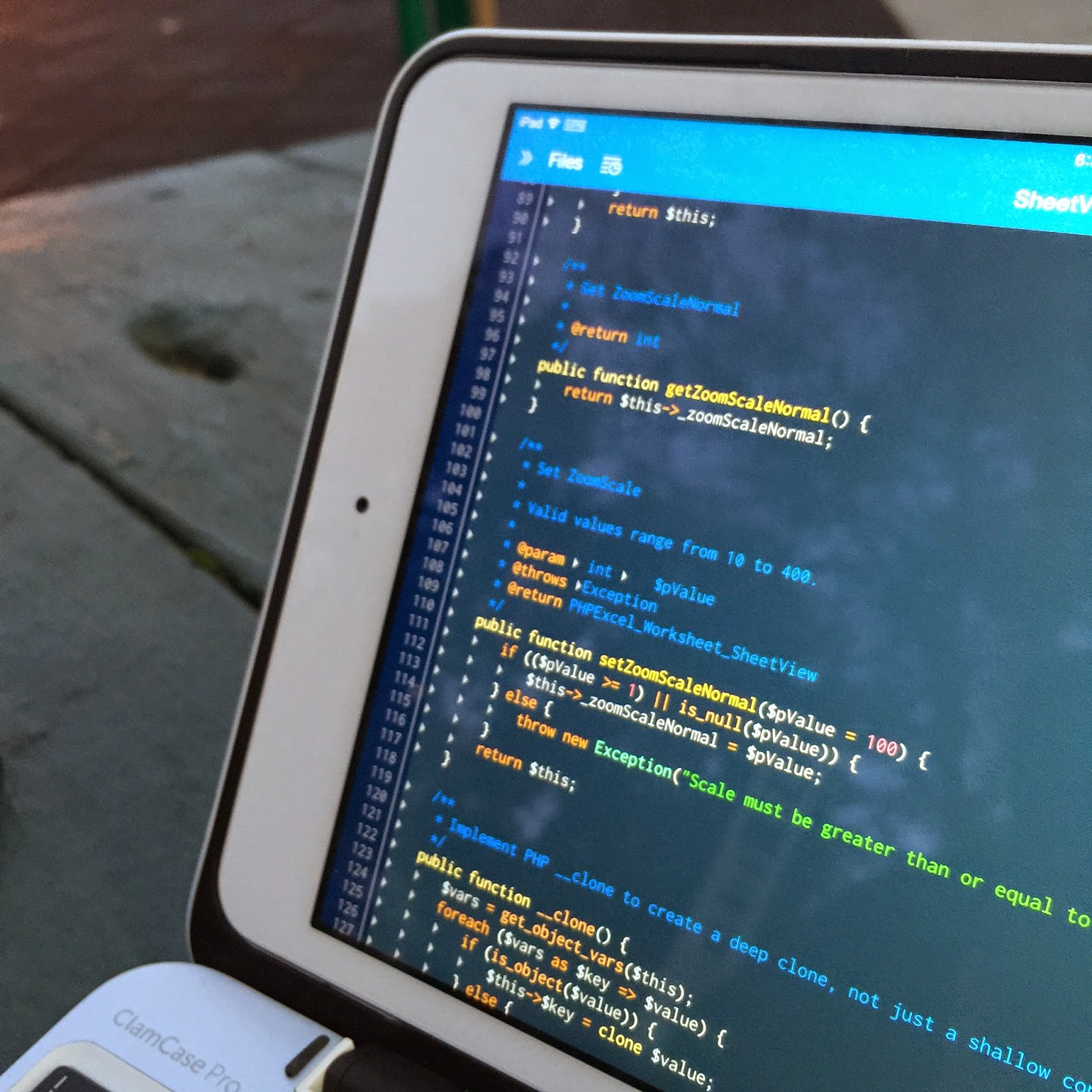 If I didn't have my iPad with me, the apps I had usually synced data across to my phone.  I could easily pick up and continue on my new iPhone 6 Plus.

Again, things just worked. If you asked me to patch a bunch of old CentOS servers with ShellShock bugs, I could do it on an iPad out in the field. Easy. If I had my Dell Venue. You'd would have to wait a few hours until I got home to my regular desktop. Ask me to write a script to batch process uploads and combined PDFs or sort XML, please wait till I get home from day trip with the kids. Your server crashed and you need to spool a redundant one? Again, I can do it from an iPad or iPhone.

In some of these pictures you see it with a nice fancy ClamCase keyboard. The BT keyboards are nice but not an absolute requirements. I could easily type using the on-screen keyboards. Typing is much more preferable on the 9.7" larger iPad than the Minis. However, both iPads work great as stand-alone devices without any accessories.

This whole post was done with an iPad. I shot photos with my iPhone, wirelessly transferred via AirDrop and edited the images, color corrected with VSCOCAM like you see in the 1st and this last picture. Seamless. Grading an image is instantly quick with little thought. On my Dell Venue, to get a similar quality, I usually have to launch something like Lightroom as VSCOCAM isn't available on Windows 8.1. Lightroom on a slow ATOM processor would take forever to load and process. Editing without a mouse would be intolerable. Is Lightroom better? Yes but it also cost a hundred bucks more and totally un-necessary for quick blog and social media pictures like this or the types you post on Instagram. I've tried the various ones on Windows like "Fhotoroom"and the likes but there isn't the breadth and quality you get on iOS and Android marketplaces. 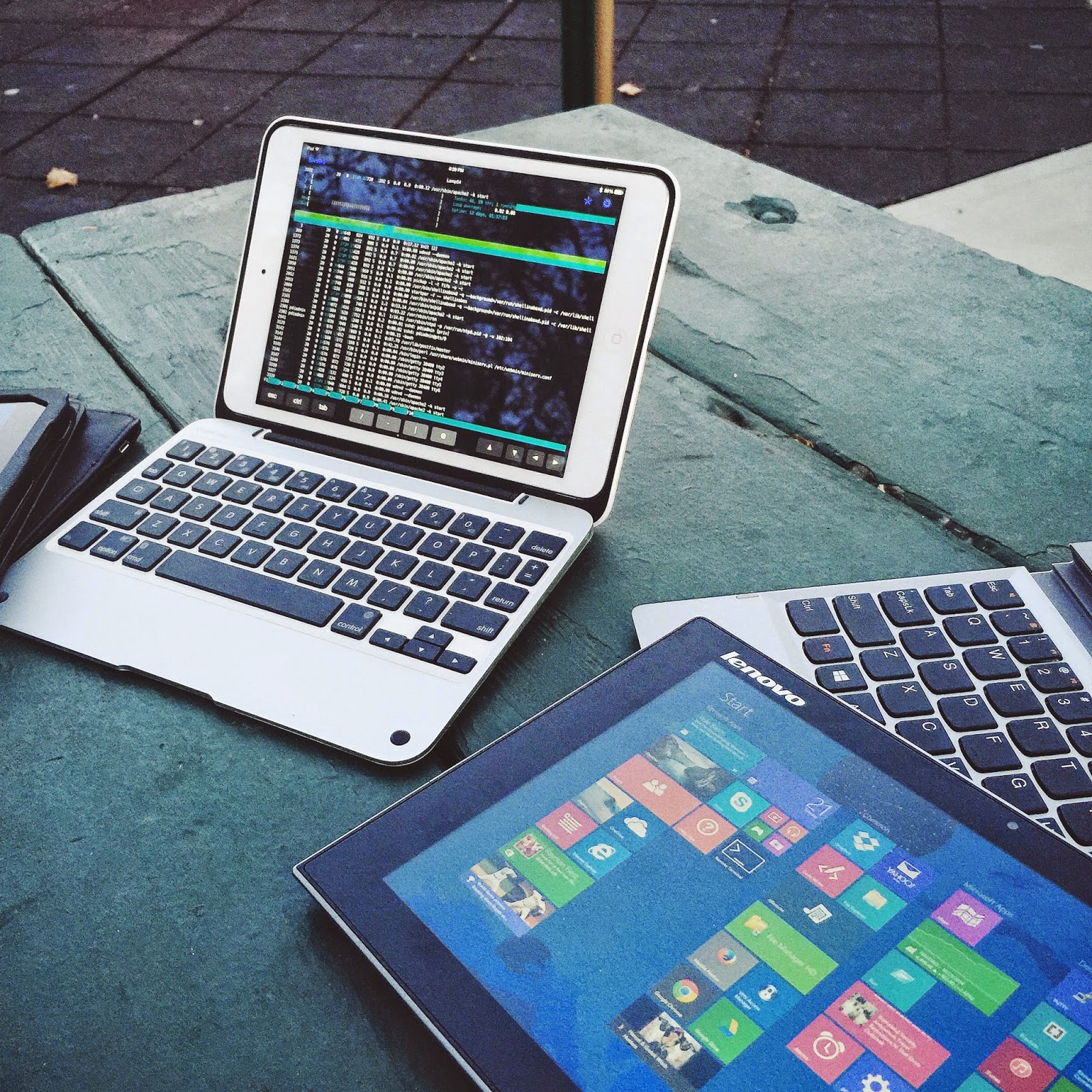 Each use cases will be different. Everyone has their own needs. Not everyone programs database apps or manage clusters of servers. Some people may have a genuine need for the free Office license that comes with many Windows tablet. Or in some cases, they want the cheapest vis-a-vis a specific screen size for just watching Netflix. As long as Windows tablets are under $300, I may continue to buy them. However, I will only use them as video consumption devices rather than productivity devices everyone is claiming they would be.

Now with the iPad Air 2 benchmarks being published. I am seriously thinking of getting a 128GB LTE model.

Posted by fortysomethinggeek at 9:25 PM