One of the best feature of Apple hardware is Target Disk Mode. The icons you see below indicates that this particular mac is now an external hard disk.

Apple has had some pretty cool hardware innovations throughout the years/decades.For example, in 1987,  the Macintosh II was the first personal computer to support dual/multi-monitor displays. Since the early nineties, Apple computers had auto-sensing, auto switching ethernet ports that allowed you to connect computers together without a hub or cross-over cable. These technologies are now taken for granted and are available for Windows and Linux users. However, Apple is the only computer brand of hardware that has the nifty feature called Target Disk Mode.

With a keyboard combo press at boot, you can turn your macbook, mac mini, imac, or mac pro into a bootable, external hard drive. The "target" computer will be seen as a portable hard drive by another computer. This is a very unique feature of Apple hardware. In fact, many of my friends and colleagues do not know this even exist.

You can use this to clone and deploy software builds. You can use to trouble shoot hardware defects of the target computer. I remember when the very first iPod came out, we deployed software builds with a 12" powerbook and an iPod 5GB using Target Disk Mode. All the Mac Workstations were built, clone and restored in less than 10 minutes. Firewire back in those days was light years ahead of USB 1.0.

Target Disk Mode now supports thunderbolt so you can shuttle large files quickly from mac to mac. For example, I know people who take their SSD powered Macbook Air on photo and video shoots. They create gigabytes of footage and proof their work remotely. When they get to the office, they target mode their Air's to their main Mac Pro workstations. They get 300 Mb/s transfer speed over Thunderbolt and it is 10-20 times faster than conventional firewire/usb. As you can see, there are many numerous usage for Target Disk Mode. 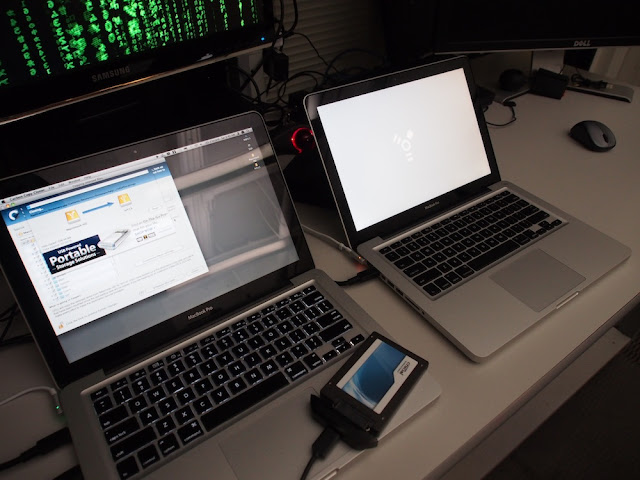 Maybe someday, other platforms will have this unique and neat feature.