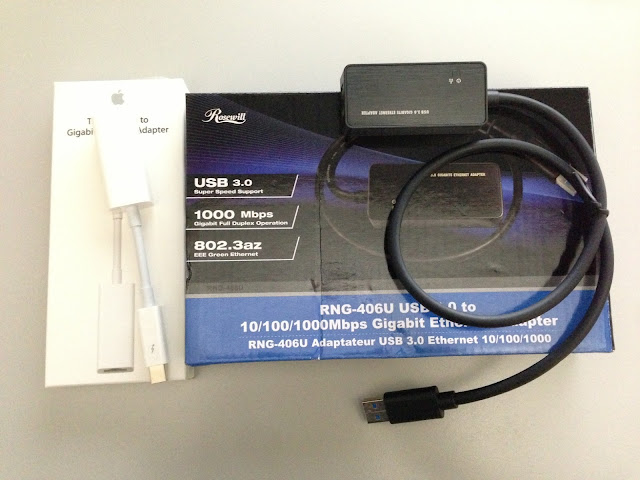 So I got myself an Apple Thunderbolt Gigabit adapter for my Macbook. I also have four Rosewill USB 3.0 Gigabit adapters using the popular (AX88179 USB 3.0 Ethernet controller).
So how do they compare?

First of all, both retail for the same price at $29. The Rosewill can be had for $22 on sale and as low as $17 on rare instances. There are other USB 3.0 gigabit adapters that sell for much, much more. However, the bottom line is they most likely use the same ASIX AX88179 chipset. You'll end up installing the ASIX drivers if you want to run them in OSX.
I've been using the ASIX based USB dongle for months. I have one dongle at each location and I even use it with my Linux based Thinkpad and various other computers. So, the USB 3.0 dongle will have more portability and wider use.

However, the USB 3.0 dongle isn't without problems. It disconnects on various occasions. When connected to a USB hub, it will disconnect if the USB bus is saturated with other devices. For example, large USB disk copies will disconnect the ethernet. This problem happens on other computers and different operating system so it is not unique to OSX.

Next, on Mac OSX, hot-plugging requires a work-around. If you plug the USB dongle after the machine boots or after you wake from sleep, the dongle does not work.
This problem doesn't exist on Windows/Linux. However, I found a work around by running a bash shell script that unloads and loads the OSX kext. This works pretty well but I can see where another user without the same level of technical acumen can get frustrated.

The Apple Thunderbolt differs from this particular dongle. First of all, it is short. I don't understand why manufactures who make USB Ethernet dongle feel the need to make long USB extension cable when you'll be plugging an Ethernet cable. Secondly, there are no drivers with OSX. It is plug-n-play. There is none of the hot-plug or sleep issues. It takes a second for the Thunderbolt adapter to be recognized and it simply works. Next, it has more configurability  You can do advance tweaks like jumbo frames and changing your MTU. It used the PCI-E lane of Thunderbolt so it feels and acts like a real Ethernet card instead on an adapter.

Performance:
Both work pretty much the same in terms of speed. Using iperf, I was getting 111-115 MB/sec transfers on both. However, the Thunderbolt does not disconnect under heavy load.

The USB 3.0 uses a little more resources in terms of CPU utilization: 30% vs 22% on the Thunderbolt. 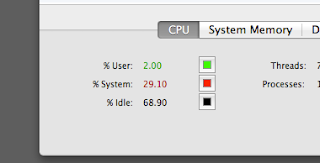 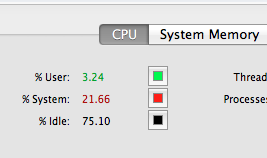 
Conclusion:
It is a toss-up. I personally think the USB 3.0 is a better buy. USB works with any computers whereas Thunderbolt is mostly an Apple-centric market. Furthermore, since Thunderbolt allows chaining, the Apple gigabit adapter needs to be at the end of the chain. Some macs only have one thunderbolt port so it is a very precious port. The USB dongle can be plugged into a USB hub so that isn't a big issue. However, I like the smaller foot-print of the Thunderbolt adapter and it will be something I throw into my backpack.

Posted by fortysomethinggeek at 2:08 PM