Four months ago, I gave a review of Elementary OS. You can read it here.
Now, here is my follow-up after four months of use. 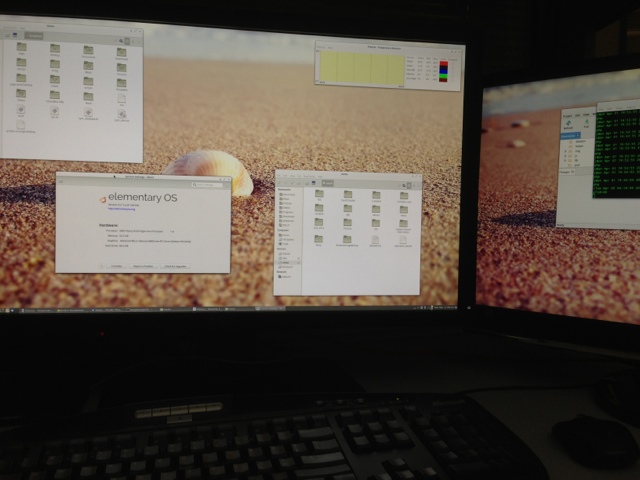 Well, I've been running it well over four months full time as my workplace operating system on a 30" and now a 27" Dell. I installed it on an SSD and just started to work on a new project. I was already deep into my work so I stuck with the build. I didn't have time to muck around and re-install Debian, Ubuntu 12.04 or Linux Mint from scratch.  So, I had to endure the quirks of Elementary OS for over four months. My final install was a FX-8320 AMD 8-core CPU, 32GB of RAM and two Samsung 830 SSDs. So I definitely gave it more than adequate specs to run as a workstation.

Here is my follow-up report. The login screen is pretty. There is nothing else to rave about. My complaints in my initial reviews about dock items and short-cuts for my Java based apps was solved. I actually spent way too much time editing desktop.item short cut files and saving out icons so I can have a working dock. My presumptions still stands. End users shouldn't have to fiddle with all this nonsense.
I also got dual monitors working but the issues of apps and dialogs split in the middle is still annoying.
I never used the built in apps and opted to install alternatives.

Well, as my project is coming to a close, this is what I ended up doing:

Yes. I got to a point where I could not stand it anymore. I like the concept of the OS but the file manager was crashing every hour. Copies would crash mid-stream. I dropped Pantheon and installed Thunar (an alternate file manager) and it was still crashing. Chrome/Chromium was having lock-ups. Pages with lots of hyperlinks would freeze the mouse. I ran updates, all the updates, purged and reinstalled my browsers.

All my problems were solved when I installed the Cinnamon Desktop Environment. Everything now works as it should. No more File Explorer crashes when I try to mount a volume or browse an external drive. No more browser lockups.

Well, I have to say it was my fault for running pre-alpha software for my main workstation. I must say, I did give it a good four month try. The File Manager needs serious work. I also have this installed on other machines for testing and the File Manager misbehaves all the time.

Lastly, I have to admit, I like the fact you can swap out DEs (Desktop Environment) just like that on any Linux distro.

Posted by fortysomethinggeek at 9:42 AM