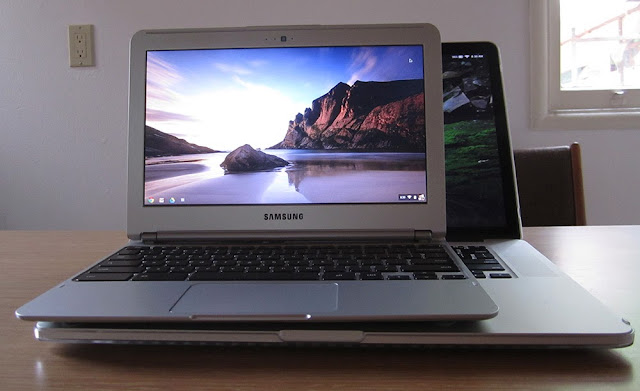 Despite my misgivings, I broke down and got myself a Samsung Chromebook. Pictured above and stacked on top of my 15" Macbook Retina Pro, the Chromebook is tiny!

It is a basically a web browser using the internals of a mobile tablet in an 11" netbook form factor. I got it because I wanted to see if I could be cloud-only. Short answer, "hell no."  However, the free 100GB of cloud storage for two years pretty much pays for the device. I also wanted to play with ARM running a polished desktop OS (yes, I consider Chrome OS a real OS albeit different). And lastly, it makes a good computer for the guest room.

Read my end user review for my impressions on this device.

Design wise, it is pretty much a plastic knock-off/derivative design of the 11" Macbook Air. There is no way of getting around this. Without the Chrome logo and Samsung branding, it looks like an KIRF Air. Unlike the Air, this is made of cheap ABS grade plastic. You can definitely feel the $250 price point. I'm sure many will agree with me. 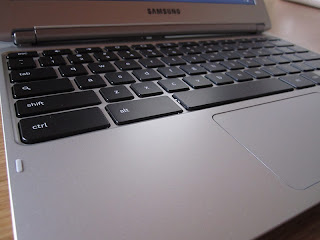 Hardware wise: It has an 11.6" screen with 1336x768 resolution. However, I rate the screen as poor. It is a cheap TFT with lousy viewing angles and color saturation. I can't see myself using this for extended periods of time. I do understand why the screen isn't so great due to the fantastic price point.
As for portability, it weighs a mere 2.4 lbs which makes this a featherweight. SD card slot and HDMI output come as standard features. However, I thought the rear port placement for USB, power and HDMI was an odd choice. 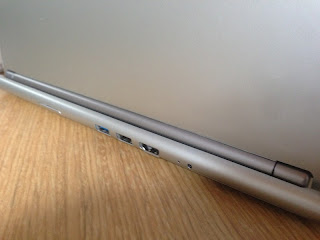 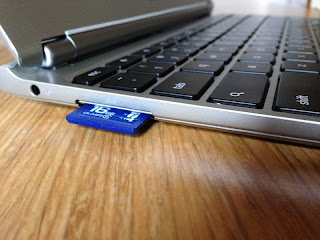 Here are the specs:


There are a gazillion reviews out there and everyone has their take on this. My take on this is simple, is this worth $180-$250?

There are a few things I like about this device. First and foremost, the form factor is very portable. You can easily just throw it in your bag without adding much bulk. It is rather inexpensive and I don't have to worry about people stealing it. You can get three of these for the same price as a single 11" Macbook Air.

The next coolest feature of any portable device is instant-on and this does not disappoint. But then again, my macbooks are just as instant (I never shut them off and only put them to sleep so the experience is just as fast).

As a complimentary device in the household (a second, third, or fourth computer), I wanted to make sure it could do a few things: access my servers for troubleshooting, watching movies on the go, and simple web surfing. I wasn't expecting to do video or image editing on this device. I understand that there are caveats for using a cloud-centric cloud only device. Most apps require the Internet. There are some offline apps but they are limited in functionality. For example, you can compose Google Docs offline but spellcheck and grammar checking are disabled until you get connected.

For simple web surfing, there is no contest between this and other mobile devices. This acts the same as if you were surfing the web using Chrome on a PC/Mac or Linux computer. The only difference is you will need to acclimate yourself to new keyboard shortcuts. If you had a lot of disposable income, you can throw one in the kitchen, one in the bedroom, one in the living room, and a few in the family room. For just surfing the web and facebooking, it is a handy device. Zero maintenance and easy set-up. This is really a no-brainer device if you have a GMAIL account and rely on Google services.

For remote connectivity, there are RDP (remote desktop protocol apps), VNC, and even a built in shell console for SSH. Control-T brings up crosh and I can easily SSH into local network servers. This makes a cheap SSH console. 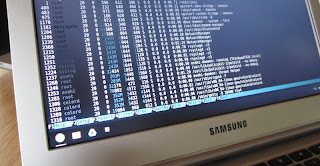 Unfortunately, Chrome OS does not support my VPN needs so I won't ever be using this device for work. I haven't tried any printing so I can't comment.

NAS (Network Attached Storage) access is a no-go. There is no CIF/SAMBA type network mounting. So if I wanted to watch a movie off my NAS or file server, I would need to share it via HTTP. This requires setting up  a webserver or something like Plex media server to stream videos. It is very cumbersome. Android and IOS devices have plenty of options of allowing you to watch your large collection of movies stored on your NAS or file server. Hence, this is not really suited as a media player as there is no real offline media management application. 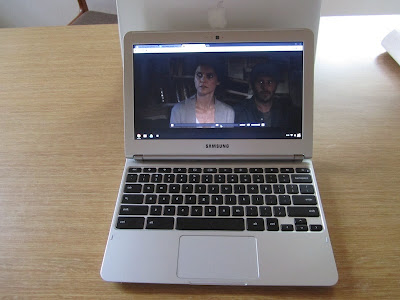 Concerning video playback, since this a cloud based computer, H.264 MP4 is the only viable video format for this device. I was able to play some other video formats such as AVI and even some MKVs through a USB 3.0 stick but the hardware doesn't seem to be optimized for anything but H.264. Videos in other format played at horrible jerky frame rates. The USB controller must be slow because I had better performance streaming the same videos off Wi-Fi. Interestingly, Chromebooks support EXT3/4 Linux filesystem along with NTFS so I was able to access files from my Linux formatted USB drives. However, exFAT is a definite no-go.

Here is a screenshot of an MKV playing through a EXT3 USB stick. 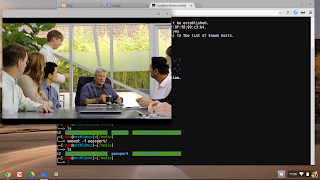 Now for the downside.

I tried to compose this blog post entirely on the Chromebook and it illustrated the limitations of the platform. First, I took some photos from point-n-shoot camera and it was frustrating. I guess I can say I lack the patience for anything. The file manager was clunky at drawing the screen, getting files uploaded to Google Drive took much longer, and editing the image through Pixlr felt like I was making too many compromises to make this work. I felt like everything took me three times longer to accomplish with this workflow compared to a traditional laptop set-up. I cannot fathom ChromeOS as replacement my other computers. I can see it being useable in a pinch like my iPad but not as my primary computing platform. 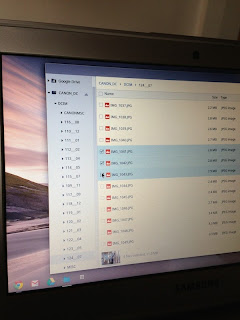 There are some other minor quibbles that I had with the product. The back USB ports is a lame spot to have ports. With Chrome OS, you definitely need to learn new short-cut keys and it is not entirely intuitive so you'll need to look up the short cut key manual.


The OS itself is a bit awkward in some places. For example,I had to dig around to spawn two file managers side-by-side to do some copies. I was thinking of using the web metaphor of right-click, "open new window" but that is not the case. I like the Guest only access but the login screen should allow people to log in with their GMAIL accounts without adding their username to the device.

You really need to be knee deep into Google's eco-system to really get the most of this device. I really don't do any syncing like bookmarks or download any Chrome apps. I do use Google Music sometimes but I find it a bit counter-intuitive for my usage model. I guess I'll be using more of Google Drive since I have 100GB to play with now. However, it will be a long time until I will ever be fully immerse in the cloud. I generate about 1-2 terabytes of personal data a month (RAW dSLR photos, 1080p family videos) and I doubt I can afford 40 - 60 terabyte of internet storage. 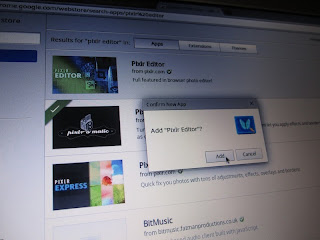 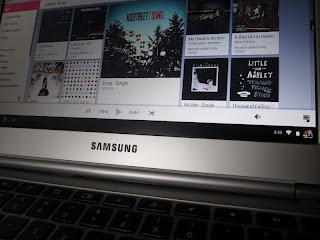 In my humble opinion, the Chromebooks are still only web and remote media consumption devices. Sure, you can write simple documents with Google Docs but none of my large 300 MB spreadsheets will even open up. Basically, none of my documents are suitable using a web only editors such as Google Docs. For example, I have specific font requirements (kerning/tracking) and you can't install Helvetica Neue Ultralight 55 into Google Docs.

Overall, I like the device but I do think there are better alternatives out there. Sure, it has a superior web browsing experience compared to an iPad but an iPad is infinitely more useful to me. I won't go into reasons why but I think and iPad has a better set of compromises. Next, the chromebook doesn't replace a netbook or low-end laptops. For a few bucks more, one can get a pretty decent AMD or celeron laptop and throw a good Linux distro on it. Then there are some Windows 8/RT devices to compete for your attention. Battery life is great at 6.5 hours but it is not terribly amazing considering it is using a small screen along with a ARM processor.

If you can get a discount on a Chromebook, it is a great for a worry-free device. You can hand it to guests and if it gets lost, you don't have to worry about your data.

You can probably snag these as open-box items for dirt cheap. I went to about 5 different Best Buys and each and every salespeople pretty much told me they have a high return rate on these. Customers simply bought these without being informed. Hence, the high returns on these. That is how I got mine and I was fortunate to redeem the 100GB Google Drive storage so I am a happy camper. I can't recommend this device to my friends and family quite yet because it really depends on individual usage models. You really need to divest your computing habits and embrace the cloud-centric notion of computing to really get the most out of this. I don't think I'm quite there yet. If your needs are only Facebook and Gmail (like many people I know), this may be the perfect device for you.

I'll play with this some more in stock form and will probably install Ubuntu or something to occupy my time.

Posted by fortysomethinggeek at 8:34 AM