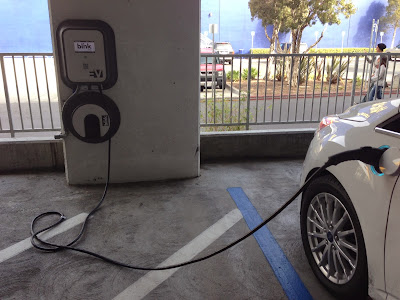 As many of my regular readers know, about 2 months ago, my wife bought a Ford C-Max Energi Plug-in Hybrid.  The car that happens to have the worst 2013 year Consumer Reports reliability rating. However, it happens to have one of the highest number of owner satisfaction.
When asked, "Would you buy this vehicle again?" It ranked # 3 out 19 hybrids. It also got a high score of 83 from Consumer reports. No issues report for mechanical drive-train from their users. A majority of the complaint is from the Navigation Infotainment system, designed/powered by who else, Microsoft. Go figure, Microsoft is mostly responsible for bringing down a fairly advance, high-tech car. Yes, the Infotainment can be clunky for a non-techie person!

Well, it has been almost two months since she got the car and it has grown on me. I'm a petro gearhead and this car has pretty much help change my outlook a bit on cars. It is now shaping my opinions on cars in general. Don't get me wrong, I still love horsepower and European sports cars.  So this is my two months observation for those interested in a plug-in high tech gadget car.

In short, amazing little ride! Now, I know why this car has a high number of satisfied users.

First and foremost, the incentives are pretty much worth it. We'll be getting back more than $5,000 in tax credits/rebates which offsets the price (and I'll detail later below). But the main kicker are these green stickers. 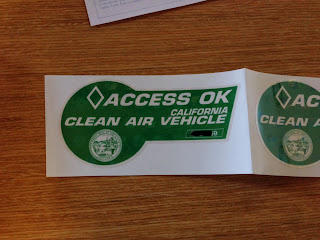 She saves about 30 minutes to an hour a day both ways in commuting time. That gives our family an extra time for dinner and family time. This is immeasurable. I also get to sleep an extra half hour each day. Life has become much more pleasant in the household with more time to spend with the kids. Driving in the car-pool as a solo driver has some interesting stories attached. There are quite of people who cheat the system, people using stolen, fake stickers. If California enforced more of the carpool cheats, they'd get more revenues from fines. That is my comment on that.

Other things I notice. In the picture at the very top, I am taking advantage of public charging at the local Ikea. The number of charging stations is pretty low considering the fact I am in the San Francisco Bay Area. For example, there are probably less than 6 public stations in the liberal green city of Berkeley. Not all of them are free. There are bunch of companies competing so you have to sign up with a few like the Blink Network found at that particular Ikea. Next, there are a lot of arses that park in the spot without charging. I pulled up and there were two BMW 3 series parked that are obviously not plugin cars. It is the same analogy as some jerk taking up a handicap parking spot so he can be closer to the store.

After a first full monthly billing cycle, our electricity cost went up $40. This is with charging every night and twice on the weekends. This is on the highest tiered E1 plan. We plan to get a second meter for 220 fast charge and switch to time of use for just the EV charging to bring that down even more.

Gas wise, the C-Max does use gasoline once the battery is depleted. So far, on a 40 mile round trip commute, 5 days a week, her fill ups occur every three weeks. She can go 950-1000 miles per gas fill up. This is a big difference compared to her previous car which took $60 fill ups every week.
People's MPG will vary on how their driving route and habits. Obviously, she has to use some gas as the 21 mile range doesn't cover her full round-trip. On gas mode, it is still good in the upper 40s. On the weekends, she is pure electric. So people who are claiming 100-160 MPGe (MPG equivalent), I believe them. It is totally possible depending on your commute. Her average is close to 85-90MPG.

There will be people who argue both sides of the fence concerning hybrids, plug-in advantages. If you are selling a good running car just to save a few bucks on gas, it is not a wise decision. For example, my current car, I probably spend $250 a month on gas. Getting another $300-400 a month lease/car payment before insurance and gas is not a wise financial decision. However, if you are buying a new car to replace an old car that needs to be replace, this brings up a different set of rationalization. And this brings me to my next part, car shopping for me.

I just turned in the lease of my last company car so I am in car shopping mode. I've been looking at lots of cars lately. However, I have my mind set on a sports car (as my primary) which I intend to buy in summer of 2014. I need to factor that in. The cheaper my commuter, the more money I can spend on the primary car.

Still, I am shopping around now for a second daily driver car.  I need a commuter and have looked at different cars of all sorts. 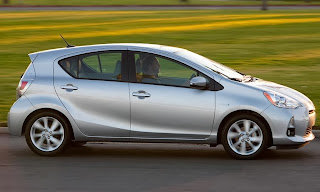 My first stop was the Prius C. It is the cheap econobox hybrid that gets 50 mpg. If all you care about is high mpg, I suppose it is a good car. I took it for a spin and didn't care for the driving the dynamics. It felt like an econobox with cheap materials. But what got to me was the price delta between that and my wife's C-Max Energi. The Energi lists for $36K but with 2013 incentives and haggling, you can get it under $30K for 2013 models. This is with a loaded car - leather, full navigation, reverse camera,etc for around $30K.  Then you throw in the Federal and California State tax credits which brings down the C-Max down to close to $25K.  The states credits are even higher in other states. Now, the Prius C Level two/three go for $22-23K and it looks and feels like an econobox. Sure, with the C-Max Energi, you don't get the tax credits right away but with my income, I can wait. For roughly less than $3K more, I get a much higher class of car with all the benefits - Solo Carpool for 5 years, 80 plus real world  MPG versus 50-60 on the Prius C. The C-Max also feels and drives like a low-end luxe car. The Prius C doesn't. Moreover, the C-Max simply drives better period. All the professional reviews seem to indicate it is better, more dynamic ride than even the full size bigger Prius. This is due to the fact it is based on a European Focus chassis. I've had Toyota fanboy friends even tell me the C-Max is a better driving, more engaging car. I'm still on the fence on the little Prius. I'm not saying the Prius C is a bad car. But remember, the Prius C is based off the Yaris platform. It drives like a Yaris.

As for the larger, full size Prius, I rather get a Chevy Volt. I know other Volt owners who have 150 plus MPGe on their cars; going months without re-fueling. This is due to their commute habits and charging daily which my wife currently does with her C-Max.

I also looked at the FIAT 500 (in gas an E). Now, this is an interesting car. It is cheap. I mean dirt cheap. $16K for daily commuter (Fiat POP w/ stickshift). It has decent gas and somewhat funky euro styling. 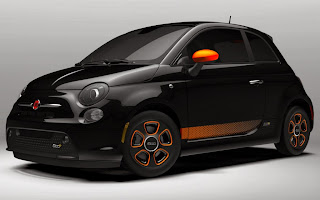 What is even better is the 500E. All Electric. You can lease one for $1K down, $199 a month in California. That is insanely cheap for a daily transportation device. However, this means I have to actually install the fast charger and I still have range anxiety issues. It only goes for 80 or so miles like the Nissan Leaf. This would be a second, third, non-primary car. It is a like a mini-me Tesla S. Pure electric. There is no ICE gas motor. I suppose it could be fun and I'm sure it would work for me. I really want that solo carpool for myself that the wife is currently enjoying. With that range, it would only be used as a commuter car. With the ultra low-lease, the residual is pretty high. The 500E is not a car you buy at the end of the lease. Now, this may change if the resale of cars with carpool stickers stay lofty like the first generation yellow carpool stickers did.

I'm not stuck on the idea of a green car. I just want something cheap while I wait to buy my mid-life crisis car next year. I looked at the Ford Focus ST and Fiat 500 Abarth. I dig both cars and I dig the Recaro seats on both.  Yeah, the FIAT Abarth is a slug but the interior is nice. I love the seats and stitching. The Focus ST has a lot of content for the price. You get a lot of car with performance and build quality. However, I am not willing to spend $30K on a secondary commuter car. At that price, I could look at the Scion FR-S/Subaru BR-Z. That appears to be a cheap fun car. It is one of those cars that you can drive 10 years and rack up 150,000 miles. In ten years, my son would be in high school and that would be a good car to hand down to him. There are some cars you own/lease for 3-5 years and get rid of before the warranty ends and there are some cars that you run to the ground and offload in 15 years on Craigslist for a few hundred bucks. This is the latter. I still need to go and test drive it. This is car, I would never lease. I would buy it outright.

The BMW i3 is not out yet. I expect it to show up in the next few months. It is one UUUUGLY car. Yep, it is ugly but for some reason, it sort of is interesting in an appealing kind of way. I'm at the point in life where I care more about the interior accouterments and drive. I think I can get pass the ugly exterior. The battery and range extender is pretty interesting. I can see this as being a primary car but at $45K, it is above my budget for a commuter. But the thought of me trading in my paid-off primary car did occur to me. That would bring the price of this car down considerably for me. 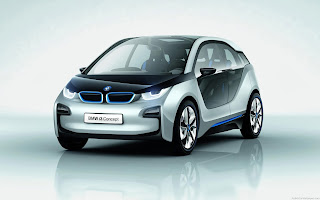 So I am stuck. The Ford C-Max Energi was a great deal but I'm not the kind of person who likes his and her cars. I can't see us having two of the same car in the household.

As I mentioned earlier in this blog, rationalizing a new car cost benefits depend on a lot of variables. I have a good working car, a late model luxury car that is my primary car. It gets 15 mpg and I spend $250-300 a month in gas. It will hold me over for another year when I come time to get a new primary car. Out of all the cars I mentioned above, the only car worth it to me is the FIAT 500s right now. Especially the 500E. The lease payments and cost to run will be less than what I pay in gas. If I can get my company to foot the bill, it would be even better. I'll keep you guys updated on what I do.

Posted by fortysomethinggeek at 9:45 AM