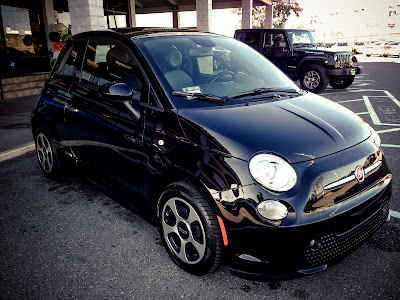 I decided to take the plunge on a new commuter car, a Fiat 500e. Voted best Electric Car for 2013 by Road and Track, this car is now in my possession for the next three years.

First of all, let's not confused the Fiat 500e from the other legendary Mercedes Porsche built 500E (capital E)  from the 90s. This is no speed rocket of a car. The "e" stands for "electric."This will be an interesting car for me as it is my first 100% electric vehicle. This post will be the first in a series of blog posts about the 500e on my blog.

There were a few reasons why I picked up this car. First, my wife's C-Max Energi Plug-in Hybrid proved to be economical and convenient. Her commute is the same as mine so the mileage range was feasible. Secondly, I just turned in a lease on a 2010 Mini Cooper and needed a replacement. Lastly, my main car, a Range Rover Sport was costing me around $300 a month in fuel. The Land Rover is a very thirsty vehicle and I was thinking of trading it in for a new sports car. However, for the time being, I still needed a commuter car and the Fiat 500e hit all the right notes. 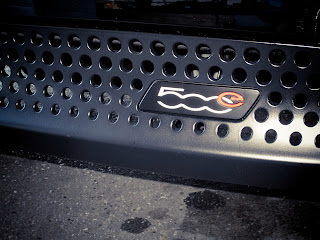 The 500e is a California "Compliance" EV car. This means, it was built to meet California's strict mandate that automakers sell a percentage of zero-emission cars in order to sell in California.
So basically, my 500e subsidizes you guys who want to drive those SRT8 500 horsepower Dodge Challengers in California. As a result, most manufactures take a small loss. It has been reported that Fiat/Chrysler loses around $10,000 per 500e sold. Thus, the 500e is only sold in California. To move inventory, automakers are pushing heavy incentives and it is a win-win for consumers. At $32,500 before subsidies, the Fiat 500e is almost double the price of a base gasoline powered Fiat 500 pop. To ease the sticker shock, there are crazy lease deals for EV cars in the state of California.

Most geeks like myself would never buy a 500e as leasing is the way to go. Who knows how battery technology will progress in three years? Worst, we don't know what the battery loss will be like after thousands of recharge cycles. Hence, leasing an electric car is the smart thing to do. Worst case scenario, I can walk away in 36 months. Furthermore, the economics of leasing makes sense for my usage. "Compliance" cars get a bad rap by EV purists but it is a big plus for California consumers. $999 down and $199 (before tax/docs) a month gets you a 87 mile range EV car.

Now, lets look at some of the math:

$199 a month ($216 w/ tax) = $7776 (total lease). My particular lease is a little bit more ($225 w/tax) due to the fact I negotiated higher miles and added a $1000 sunroof option. However, the true cost of this lease is much, much, much lower. I get a California EV rebate of $2500. Subtract the EV rebate from the lease gets you total $5276 before docs, tax,etc. This equates to an effective lease of $146.55 a month over 36 months. However, there are more incentives. You get HOV stickers which gives you discount to bridge toll. Normal toll is $6 during commute, carpool rates is $2.50. This saves me $76 a month. Subtract that from the lease, the end cost to me to have this car is roughly $70-75 a month.  I would pay toll regardless of what car I have but here, I rather put that $76 a month toward a car than the transit authorities.  In the end, this is cheaper than a cellphone subscription plan for me. This doesn't account for the savings in gas by using electricity. I'll be saving close to $3600 a year in gas. I got a good deal. Chrysler/Fiat also throws in 12 free days of car rental each year (totaling 36 days) that I can use for long business trips and long drives to Tahoe or Los Angeles.

This car is insanely cheap and an incredible deal for California consumers who's driving habits align with an short/medium range electric vehicle.

Since I got this car, I'm still feeling it out and will write a bit more later. 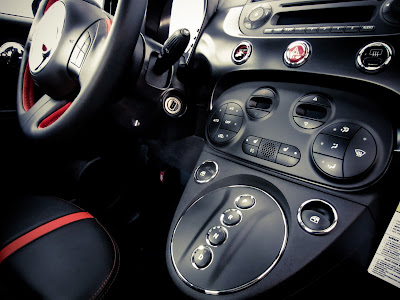 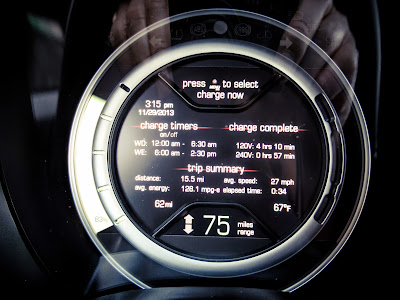 The range after my first full charge. The car will analyze your driving habits and instantly update the range as you drive. I doubt I'll get 96 miles per charge. More likely, 90. I'll better the EPA rated 87 mile range due to my driving style. 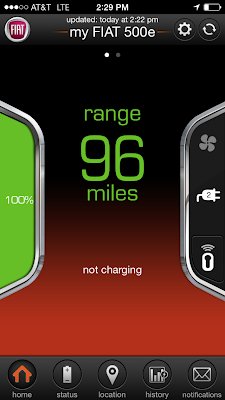 Posted by fortysomethinggeek at 10:04 PM