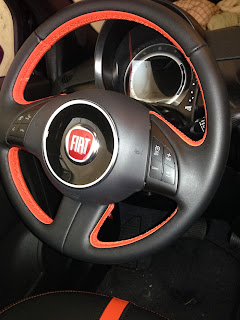 My first week with my Fiat 500e was rather interesting. After the second day of ownership, I got a flat tire via a nail puncture so I was immobilized for a day. This is not the fault of the car. After that fiasco, I  began to enjoy the fruits of driving a 100% electric car. Every concern you may have came into play - range anxiety, charging, awkward driving. Hence, I decided to make this write-up for those interested in venturing into EV land.

The first day of commute was rather pleasant. I was able to remotely start the climate control system of the car while I was in bed; getting ready to go to work. The car can be pre-conditioned for two ten minute intervals via the smartphone app (both iOS and Android). You can either heat your car up in the morning or turn on the A/C while it is in the blistering sunny mall parking lot while you shop. This ultra cool and handy! 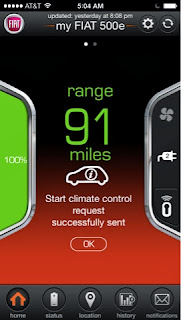 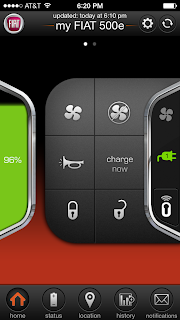 My commute is exactly 50 miles round trip which includes errands and detours. Pre-heating the car in the morning killed the range by ten miles (unless you are plugged in charging via 240V). Sloppy driving will kill the range. This cause a bit of range anxiety. I know the car's battery will degrade over time and it won't hold it's charge over the years so this is a real concern of mine. However, this range anxiety has been really hyped up by EV critics and media. At the start of my commute the range dropped by 10 miles. However, after 15 minutes of driving, I no longer needed to run the heat at 84 f. I slowly regained those 10 miles back from regenerative braking. Going up an incline will drop your range by 3-4 miles. Going down an off-ramp and braking will regain those those 3-4 miles and maybe even add a few more back in. For example, going up the new Bay Bridge, I saw an immediate drop of  4 miles with my range at 60 miles. As I approached the first off-ramp with a steep decline, I got back 3 miles. Driving through a few city streets, I ended up with a 69 remaining miles as I pulled into my work garage. In the end, it all even out. Obsessing over the range is un-necessary if you know you have a cushion. In my case, it is 30 plus miles. I obviously know and understand the limits of this car. I also an ICE car as a back-up.

Over a period of a few days, the numbers all worked out. As you can see in my morning commute, after a drive of 21.9 miles, I still have 69 miles of range left. Indicating, I was getting 90 miles or so per charge. This is regular San Francisco commute with the heater on at 5-6AM. 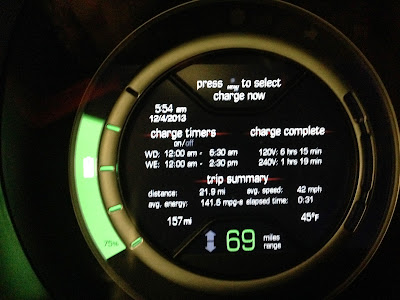 It also tells me that I need around 1h 20 minutes to top it back up at 240V L2 charging. So roughly, my daily commute will require less than 3 hours of charging per day on a L2 charger. I'll discuss charging further.

My average MPGe (Miles Per Gallon equivalent) is roughly 141.6 MPGe on this trip. This really doesn't tell anyone anything because MPGe is pretty convoluted on how the EPA worked that out. California has high gas prices and electricity rates so the EPA's MPGe formula is out of whack to me. The more important measuring stick is how many miles per kWH I am burning. This is what I care about and this is what you should consider when buying and driving an electric car.

Doesn't this make more sense? Then when you see how many kWH you are burning, you can see your true cost to operate. I plugged in the .30 cent a kWH which is around Tier 2/Tier3 PG&E. This is considered pretty high. That trip cost me $1.50 at that high rate. Now, if I change my charging habits and PG&E rates, I could get it down to .10 cents a kWh; making this trip $0.50 cents. The same trip in my Range Rover at 15MPG would cost me $6.21. So even at the high PG&E rate, I am still saving quite a bit of money. But if switched to a TOU (Time of Use) PG&E rate, I could save even more. Actually quite a bit more but it requires some consideration. 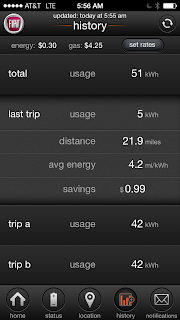 After about two days, the range anxiety goes away. I don't even try to drive like a grandma anymore, I just drive. I know I have sufficient range for my needs. However, charging was pretty problematic the first few days. Charging 110v takes a long time. It takes 23 hours to do a full charge. However, since I am never running on empty, my charge time was 12-13 hours the first few days. That meant when I got home, I had to plug in right away and let it charge over-night. This meant no side trips or anything as I could use my other ICE (Internal Combustion Engine) cars for errands.  There were times where I wanted to stop by some local L2 quick chargers. One hour of L2 charging would be the equivalent of 5.5 to 6 hours of 110v charging. I figure I could do some Christmas shopping for 2 hours to top myself off to 80-90% pretty quickly.

Now, I have a L2 charging station installed and it takes less than 4 hours to do a full charge from empty. Average charges take an hour to 2 hours depending on my needs. If you plan to have a 100% electric car, 240v L2 charging is an absolute requirement. My wife's car can get away with 110 charging since it is a plugin, extended range electric hybrid.

Driving the car is a bit interesting because the range meter fluctuates on how you drive and the roads you take. It also accounts for weather. Some mornings, I get 96 mile range, Some days, I get a predicted 88 mile range. I'll drive for a few minutes and the car will drop 6 miles just going up an incline and regain those miles as I coast along city intersections. The faster you drive, the quicker you burn up the kWH of battery juice. All in all, I think the EPA's rating is very fair and accurate for this car. The car, as many professional media reviewers noted, consistently matches the EPA's 87 mile range. I'm sure, you'll have some outliers claiming they get 100 mile or so range. Sure, it is entirely possible to even break 110 miles or so but it will be painful with no air-conditioning and driving in the slow lane.

Here was a very good day for me. 79 mile range after driving 21.9 miles. So I pretty much have more than 100 mile of range on this one charge. 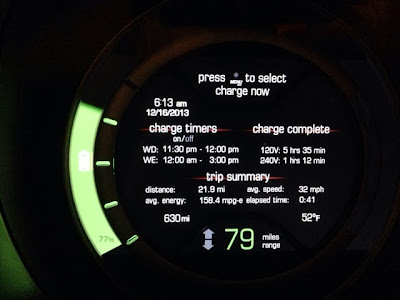 My mi/kWH was 4.7 which is pretty good indeed. Public charging is interesting. There are a bunch of companies competing for EVSE charging stations. Chargepoint is one of the biggest. You really have to study what they charge at each location. By the hour, at $1.00 is pretty fair in my book. With a 6.6 kWH charger, that comes out to roughly $15 cents a kWH. Unfortunately, at this one particular Chargepoint, they changed from hourly to kWH charging. At .45 cents a kWh, you are better off charging at home. An hour charge here costed me around $3.00 which simply was not worth it. This particular station gets no use so there were a bunch of bystanders with the look of befuddlement as they saw me plug in.

At other locations, I like the fact I get front row access to entrances. In Emeryville, the IKEA Blink stations charge $1.00 an hour at the free parking spots. Now, compare that to the next lot for Bay Street Shopping at $3 an hour, that is a bargain. In two hours of shopping, I'll top off my range of 40 or so miles. So whenever I go to Emeryville, I'll park at IKEA and make a short walk to Bay Street shops. The stalls are also widely space so you don't have to worry about parking lot dings. Another great plus! 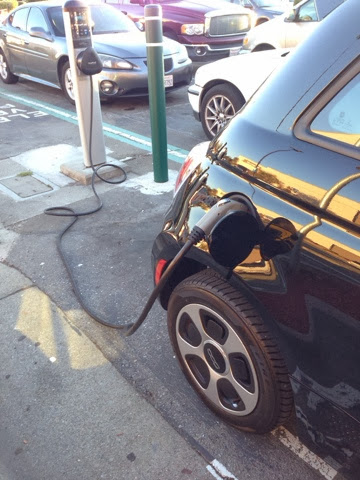 There are no guarantees you will have a spot available so all the EVSE companies have smartphone apps to tell which are available and which are in use. I suspect all EV drivers are pretty much smartphone aware by now. I haven't run into any problems but I have notice a few ICE cars parking in stalls where they shouldn't be and some EV squatters who definitely hog the spaces without charging.


This car's braking system was designed to be seamless. Unlike some other EVs, you don't really feel or know when you are regeneratively braking. From what I've read, this was the intent from the engineers. Still, it feels kind of weird compared to other EVs. I want to feel like I and putting energy back into the car. However, I guess this should be good for most people. There are many obnoxious EV drivers who continually brake their cars, forcefully coast from stop sign to stop sign; holding up traffic so they can squeeze in some extra juice. Those drivers may be pleasantly disgruntled to expect that feedback from this car.

Compared to my wife's car, this car doesn't feel like it has all the necessary tech. Each car will have a different set of software and UI. I think I simply like Ford's implementation better as it gives you a lot more data and coaching on how to drive. The instrumentation panel is rather simple for an EV. On the right side of the dial, it either goes red up when you are burning too much, green in the middle for ECO, and blue when you are regeneratively putting energy back in.

I think I'll give more comparisons to the C-Max Energi in a dedicated post. There are lots of Chevy Volt versus Nissan Leaf comparisons on the Internet so it might be fitting to have a Fiat 500e versus Ford C-Max Energi from a real owner who owns and operates both.

I really like how stealthy this car is. Mine is black-on-black like all my other previous cars. There really isn't anything to tell a bystander that this is an electric car. Sure, there are some badging here and there but you really have to be look and be acutely informed on electric cars to know. There are a few outlandish color schemes orange with white fender that have in-your face orange accents on some 500es.  I'm glad I went with a more conservative color scheme. I park in a garage in San Francisco full of Mercedes, Audis, Porsches (nice ones like the GT3, C4s), Range Rovers, and a few Teslas and the valets seem to be genuinely more interested in my car. They also know I've gone through half a dozen or so new vehicles in the past decade and sort of expect me to have a new ride. Yet, they seem to be fascinated with this one more so. I guess they're interests lies in the fact that the Fiat is extremely affordable and within reach for many.

Posted by fortysomethinggeek at 7:04 AM