Six months with the Samsung Chromebook 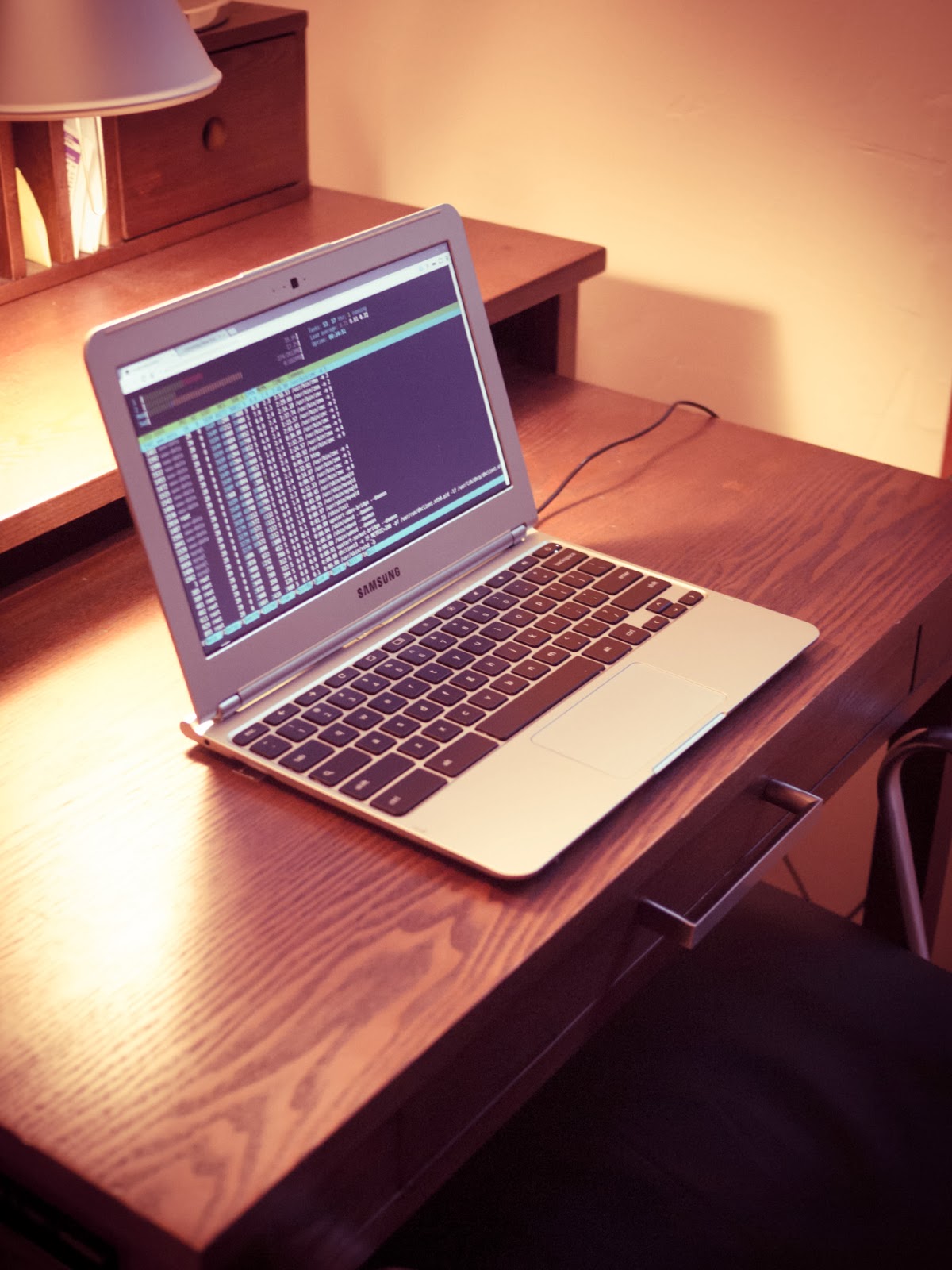 It has been close to six months since I got my Samsung Exynos (ARM) powered Chromebook.
I've been using quite a bit lately and have some time to reflect on using it.

The same criticism I had in the beginning still hold true. The device is still very limited in what you can do with it. However, it's strengths are the reason I still use it.


Since then, I've installed CROUTON and Debian Linux on it. Using it as Linux development workstation is a bit iffy. It is just not fast enough to be a laptop replacement.  The Acer x86 Chromebook I have is a bit better suited to running Linux. Because of the speed, I don't use the Samsung Chromebook for any serious work and still rely on Macbook Pros.

Using it as a Chrome OS device is the reason why you use this laptop. And that is how I've been using it mostly: A Lightweight, low power Chrome Browser.

I still haven't invested much into Google's eco-system. I don't think I've ever created a Google DOC spreadsheet in the past 3 years. Google Drive is nice but I only use it as a temporary shared Hot-Folder to shuffle small files around. The only apps I've downloaded were PLEX, VNC, and a few offline text editors.

There are three compelling reasons why I still use this.

1. Price. It is so cheap it is disposable. Nothing much to add here. I still think it is a good bargain. 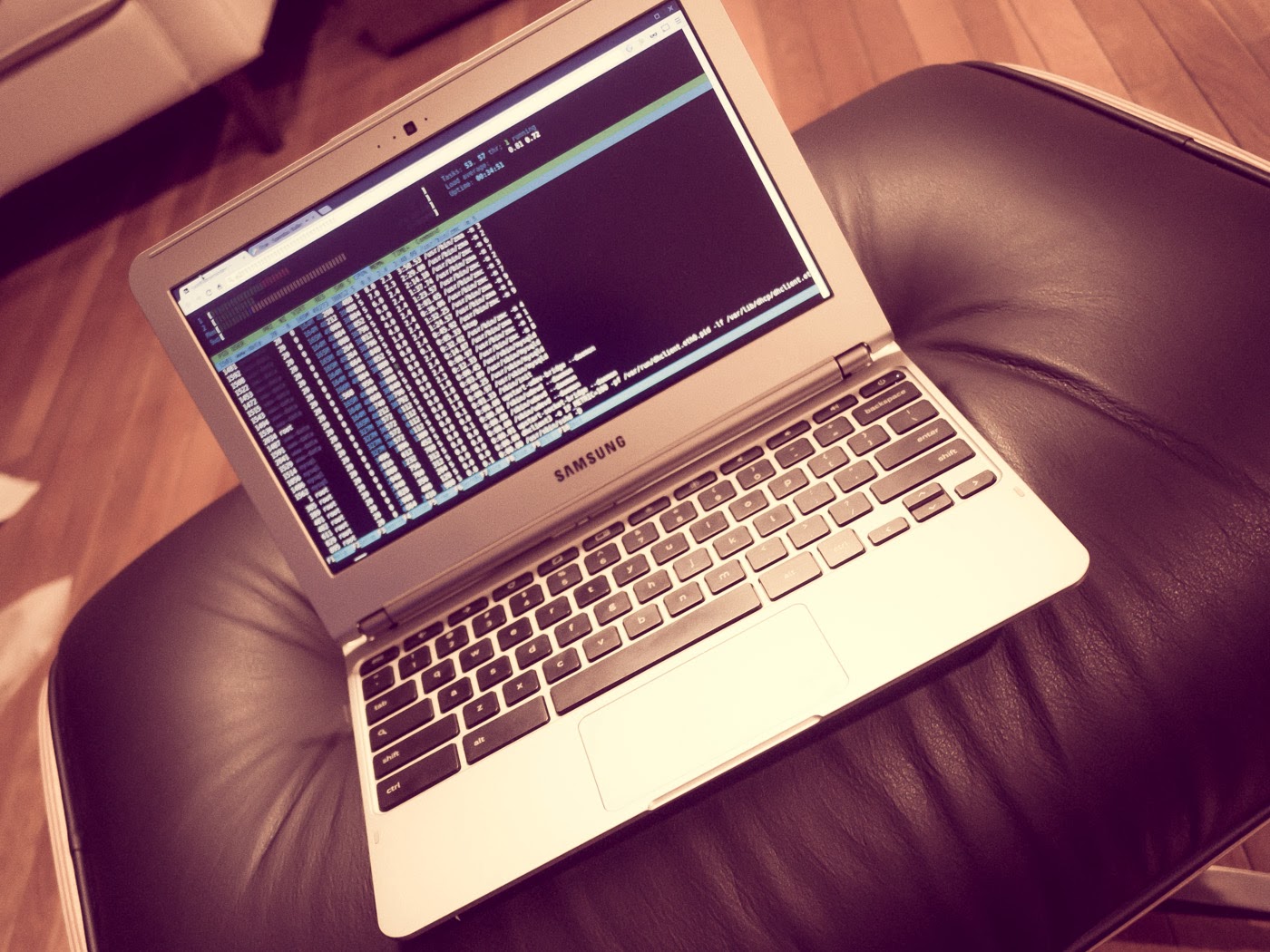 2. A Laptop you can use on your lap. I like to lounge around the house; kicking it on my luxurious Eames Lounge and Ottoman with this on my lap. My Macbooks and Thinkpads all get hot. I like to sit on my chairs for hours at a time and this delivers. Sometimes, I'll just pull up a local PLEX stream and enjoy a movie until I fall asleep in my Eames lounger. We have a few other chaise type chairs in the house and I gotta say, this is the only laptop device that works due to its low power architecture. 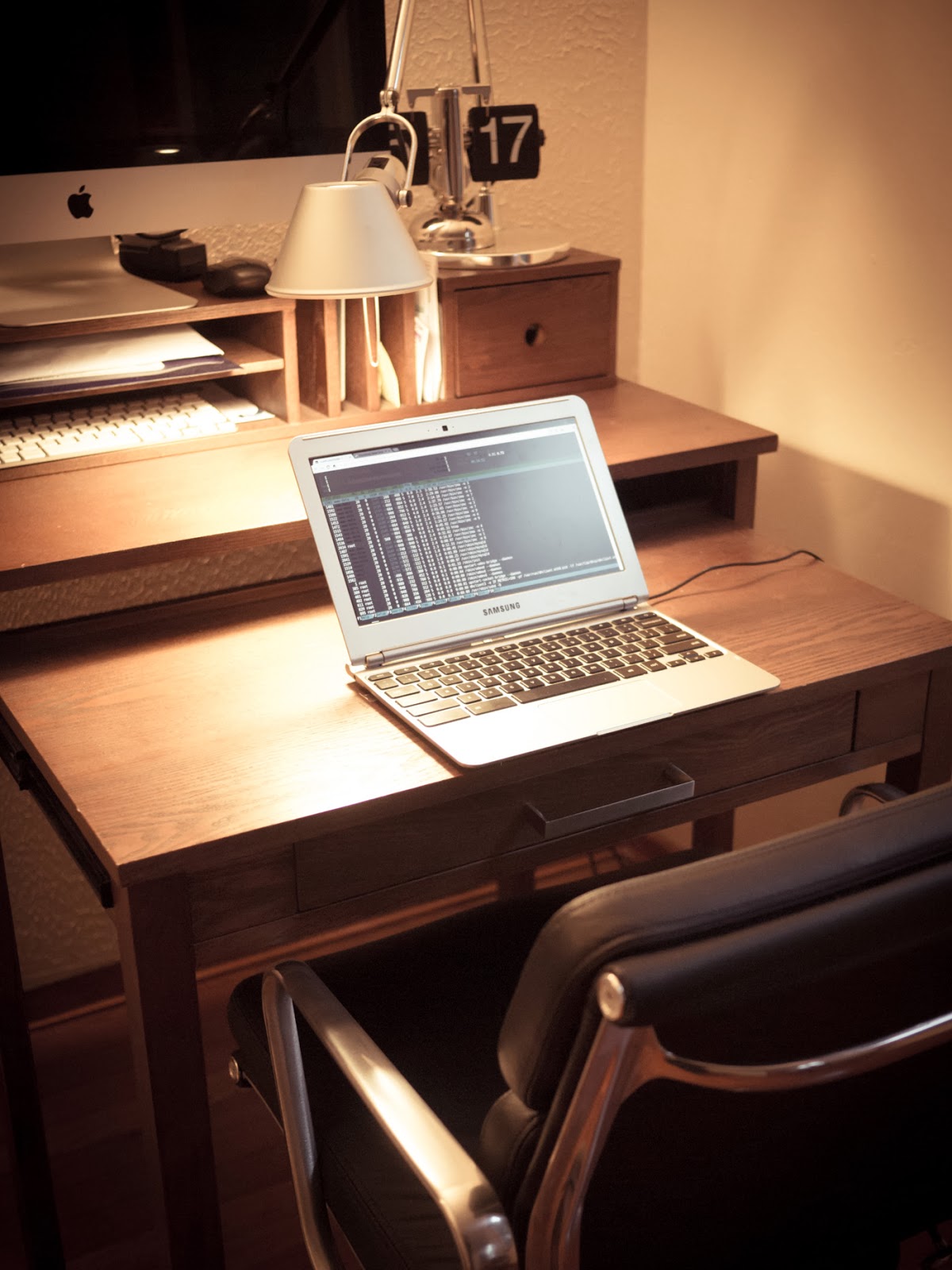 3. Convenience. Instant on. Sometimes, I don't want to walk down two floors into my office. I also don't want to wait for my bedroom iMac to boot up nor do I want to pull out my laptop out from my bag. With the Chromebook, it is instantly on if I just want to log into my bank. I hardly use my 27" iMac these past few months. I don't even have a case or bag for this. It can be found in different parts of the house without worry.

I've been using the Chromebook quite a bit just with CROSH terminal and SSH. I've been re-doing my entire home servers and since everything runs Linux or OSX, I can just SSH into my remote servers. I really don't need anything much for emptying drive space on my surveillance cameras or installing apps on my remote Linux boxes. I think I use it pretty much exclusively on Sundays when I don't have to do real work that requires pulling out the Macbook Pro or firing up the my i7 desktop workstation.

So far,so good. The only thing I wish for is speed. I can feel it aging in terms of pep. Pages tend to load slower and multi-tabs tend to eat up a bit of memory. It may be the fact I also have Debian Linux installed side-by-side. There are some glaring stuff with Chrome OS that is also lacking but I attribute that to the design and security Google wanted to put in place. For example, there is no mDNS bonjour .local network addressing and obviously so. Google wants you to surf the Internet and not use this as thin-client for your local LAN network. I've overcame Chrome's lack of network file access by using PLEX.

I'm looking forward to newer ARM based Chromebooks in the future at this price point.
Posted by fortysomethinggeek at 8:34 AM