Android Wear and the Moto 360

Google recently announced their new wearable platform, Android Wear. They will concentrate on watches first. The platform is suppose to extend the reaches of the Android eco-system to wearable gadgets.

One of the first announced piece comes from Motorola in the form of the moto 360. 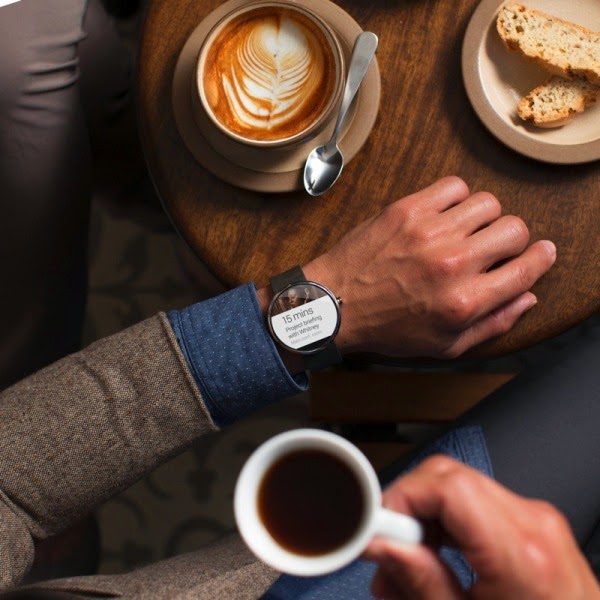 And apparently, it is frothing with enthusiasm on the Internet. Really? Elegant? Classy? Yep, those are the remarks I've been reading. Really? The watch looks like cheap Movado, Citizen, mall watch knock-off. And another comment, why does the guy in the coffee shop  (pictured above) needs a cappucino AND an expresso? I get it, they want you to think he is some cool,hip dude with a cool, hip watch in a cool, hip coffee shop.

I have pretty high standards when it comes to wristwatches as many people know, I collect them. But this moto 360 is really ugly. It is the kind of watch you see on lay-away at the local mall.

I don't know enough about Android wear to even speculate but in terms of wrist-watches, I'll definitely stick to my mechanical Swiss made Chronometers. It must be my age but I don't see the appeal in these items as they're disposable. Unlike an IWC or Breguet, these aren't the type of heirlooms you want to pass down another generation. Unlike a Rolex Sea-Dweller, Omega Planet Ocean, Blancpain 50 Fathom, or Panerai Luminor, these aren't the type of watches you want to take rock climbing or snorkeling. I like patina on my watches. I wear my Omega Seamaster Professional SM300 to fix the car, rigorous housework, or anything dangerous. So what if my $2,000 beater diver's watch gets scratched up. It gives it a natural aging patina. Electronic gadgets? They look like crap when they're all scratched up. Battery life? Who knows. All I know is when I am on vacation, I don't even want to think about an electrical wall outlet. Which reminds me of my youth; backpacking abroad. I remember having nothing but my Rolex GMT Master II in Bali for a week. I never had to plug it in every night. Never took it off to do any physical activity. I can't imagine the same thing with one of these electronic watches that need daily recharging.


It must be the sign of the times or I am getting old.This is an area I won't even get into.