We live in the San Francisco Bay Area and we get charged quite a bit for electricity. $200-300 a month PG&E utility bills is fairly common for a regular household.

I just switched to PG&E's new EV-A rate (for owners of Electric) cars and I am happy as clams. It has been a good solid four months and I am very pleased with the results.

Deciphering a utility bill is pretty hard for many people. I work with fairly smart people but 9 out of 10 do not understand how they are being charged for electricity.

In the SF Bay Area, a majority of the residents use a Tiered pricing scheme. This is called E1.
You get an alloted baseline usage rate. If you go over that usage baseline, you move into different tiers. The more you use, the higher the tier you go. The rates start at .13 cents a kWh to up to .36 cents. It is that simple yet many people I know don't understand that.

At the beginning of the months, you may not pay a few pennies, cents for daily usage. However, as the days progress, the more total kWh you use. Eventually, for me, it would cost me $10,$12, up to $17 a day for electricity as I reached the higher tiers. This is was way before we got our electric cars. We would hit Tier 4 in the middle of the month by just using the cloth dryers. Eventually, our monthly would be in the $200-300 range.

Staying under the lower tiers was hard even without usage. There were months when we didn't live in the house (as it was being renovated) and the contracters would kick us to Tier 2 and 3.

Here are some graphs from our online PGE usage. 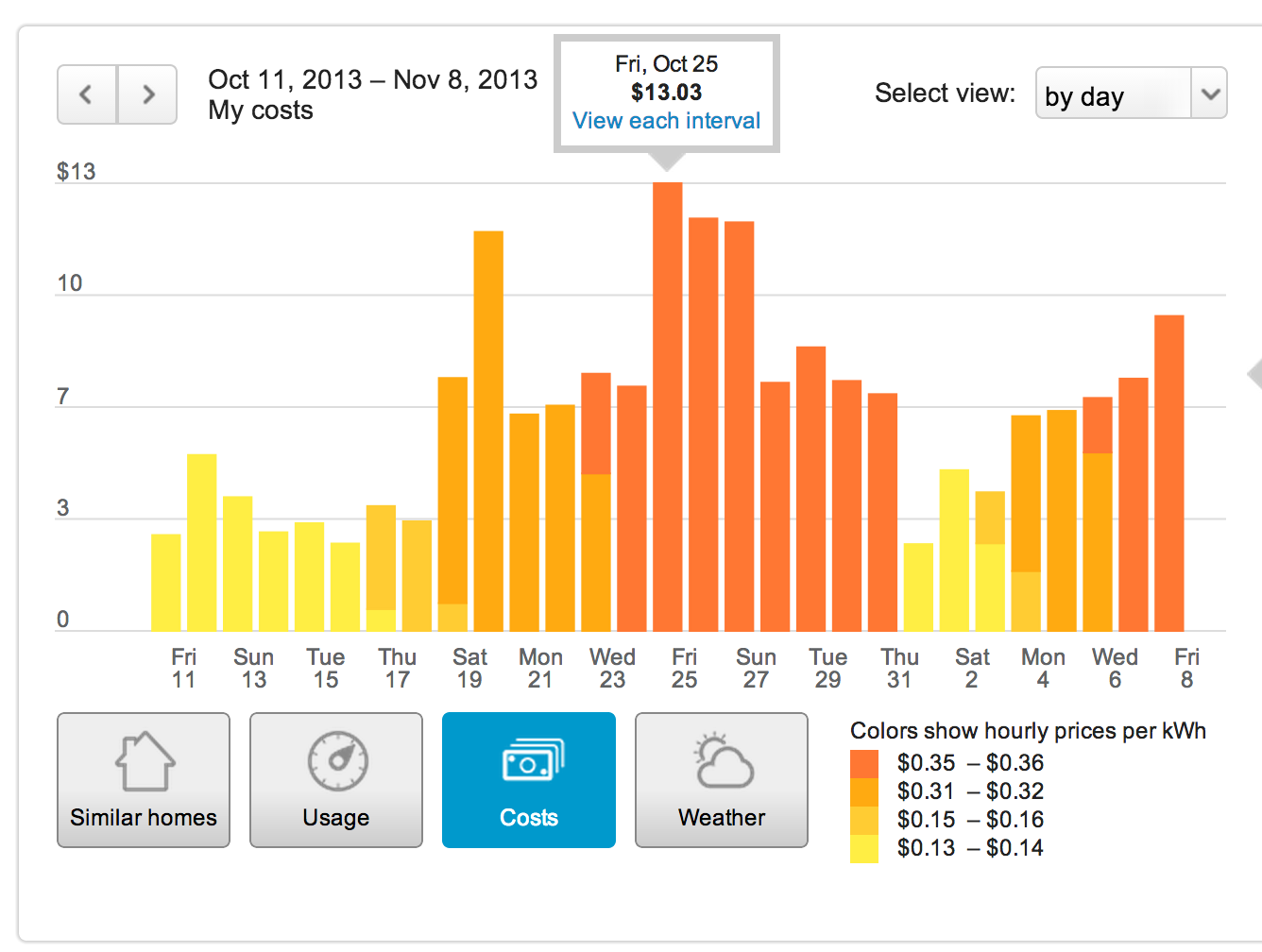 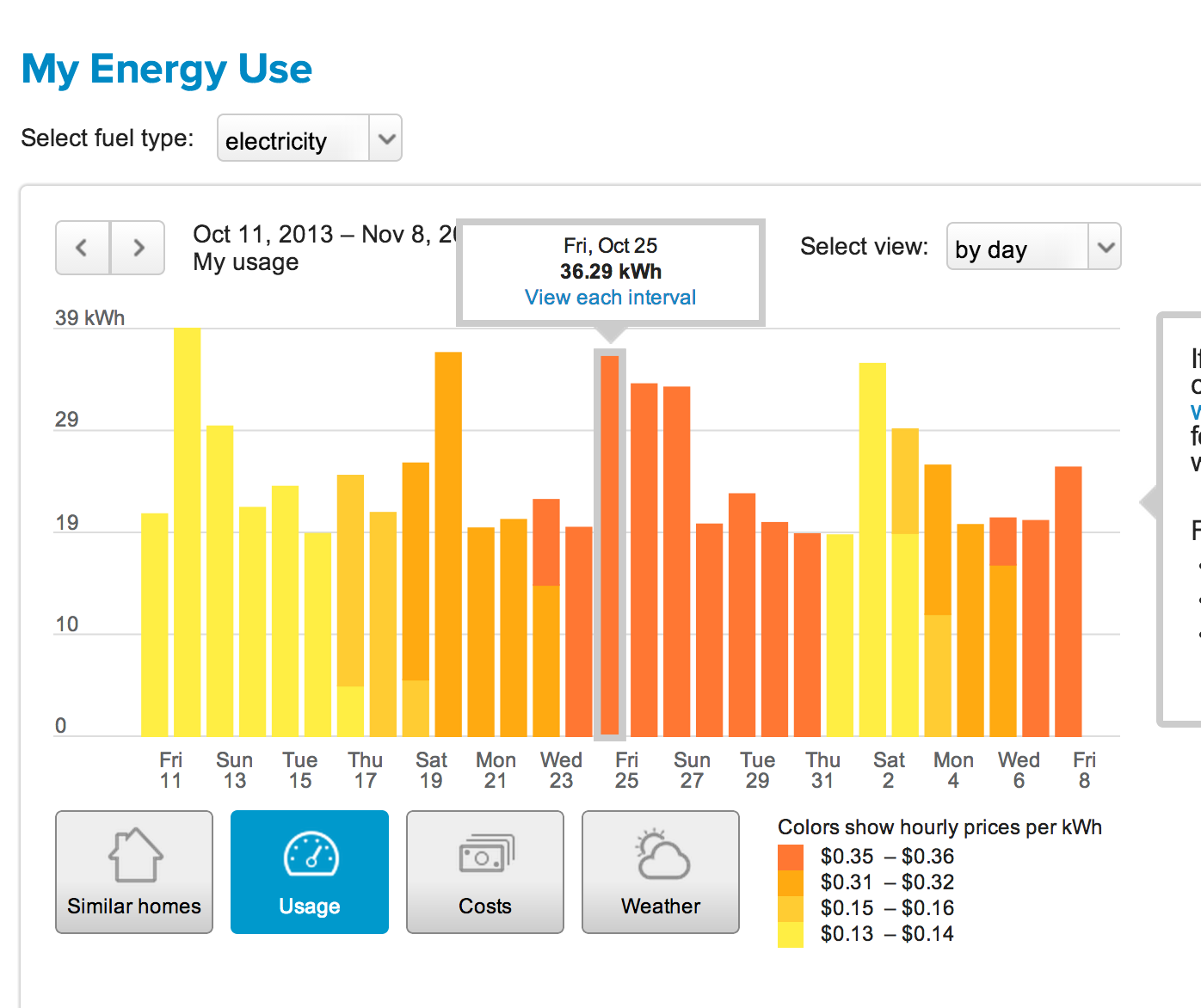 Yikes. $13 that day just to do 3 loads of laundry. Fortunately, both our old Fridge and Dryer went out and we replaced them with more modern, energy efficient ones but that didn't help much.

Then the wife got herself a plugin car. Getting a chargeable car didn't really make a difference as we already hitting Tier 4 and getting charged a high .36 a kWh rate. We were still paying a high monthly utility bill.

Time of Use. I resisted this idea because I did not like the fact I had to time my life around PG&E schedule. If you use electricity off-peak, you get charged a significantly lower rate. This is fine if you can cook dinner after 9pm for those with electric stoves. I resisted and really thought it would be a hindrance.

We switched to PG&E's EV-A rate. This is a special plan for EV car owners. Peak hours are 2-9PM weekdays, 3-7PM weekends. There is a partial peak from 7AM-2PM, 9PM-11PM. Everything else is off-peak. They have two different rates for Summer and Winter.

Bottom line, if you use heavy electricity, use it in partial or off-peak hours when the electric grid is less stressed. For many, like myself, it felt like a big hindrance and inconvenience.

However, I was wrong with all my pre-conceptions and prejudices of TOU. We tried to do a schedule for a few weeks so we can analyze our usage.

The results. Very good. We still have some of the highest electricity rates in the nation but it is now more appealing.

Unlike the previous graph, the orange red bars don't dominate the screen. As you can see there are days where we pay hardly anything. 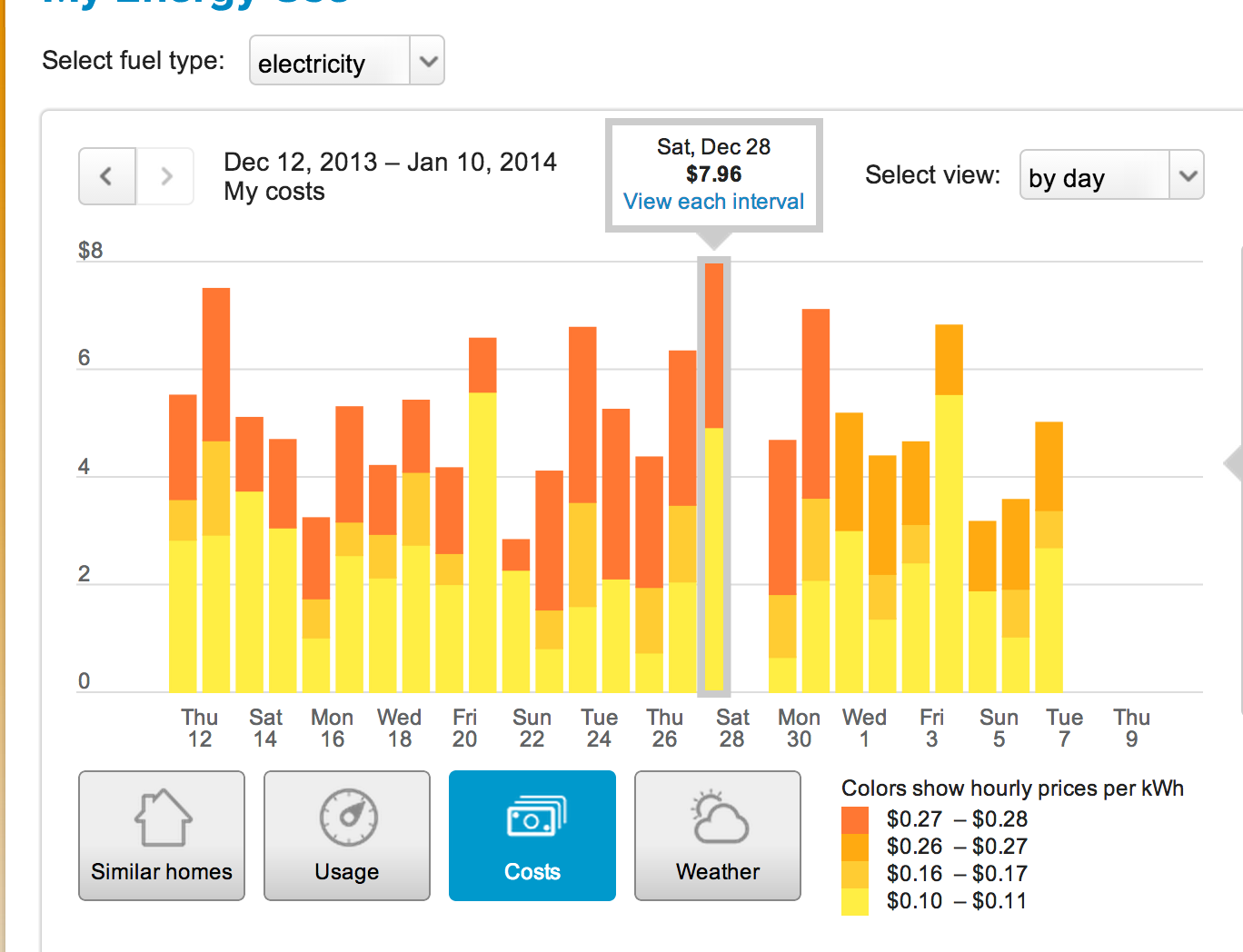 The most expensive day was less than $8. And that is with extremely high usage of almost 60 kWh for the day. If we stuck to our normal plan, that day would have cost us $21. 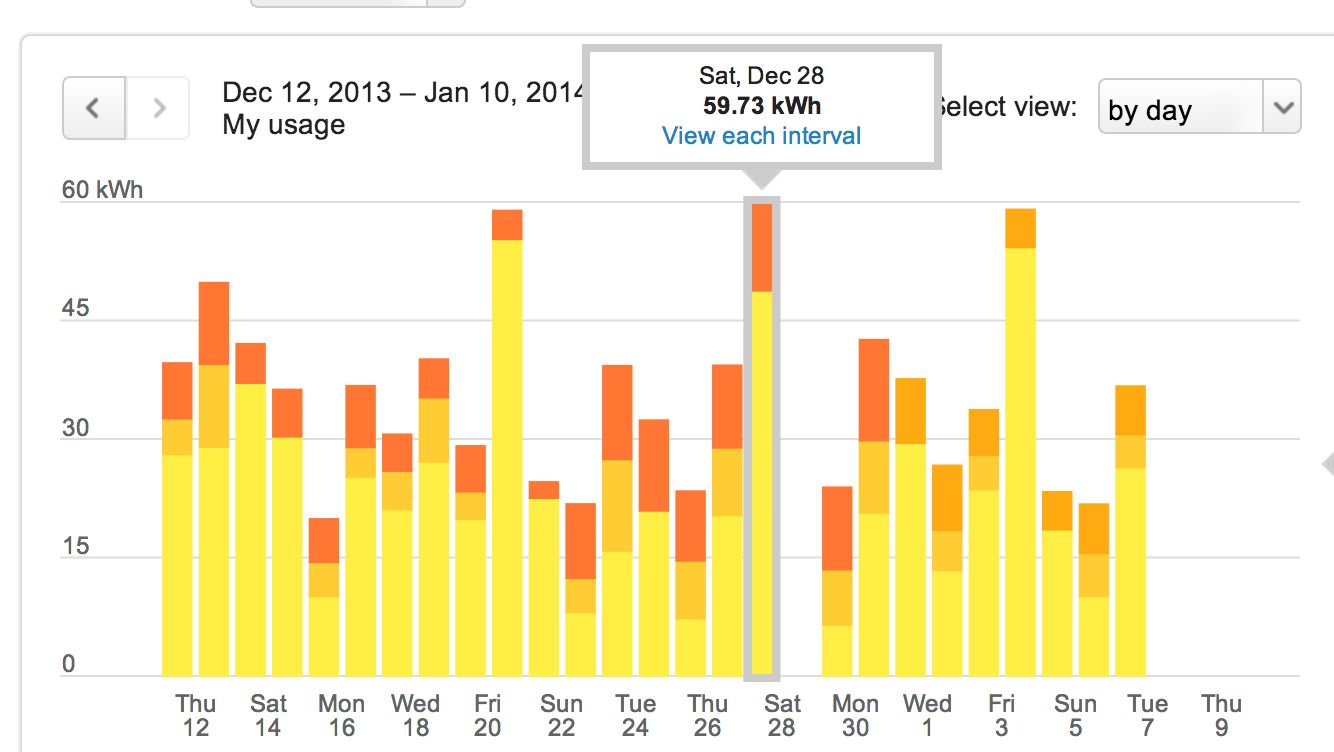 60 kwH is unusually high for us. Our average day now cost us under $5. This is with two plugin-vehicles both charging at night. Our cost to charge is roughly $1.75-1.80 for two cars to drive 70 miles a day. The chart below shows an average daily use. Charging kicks in after 11 pm. 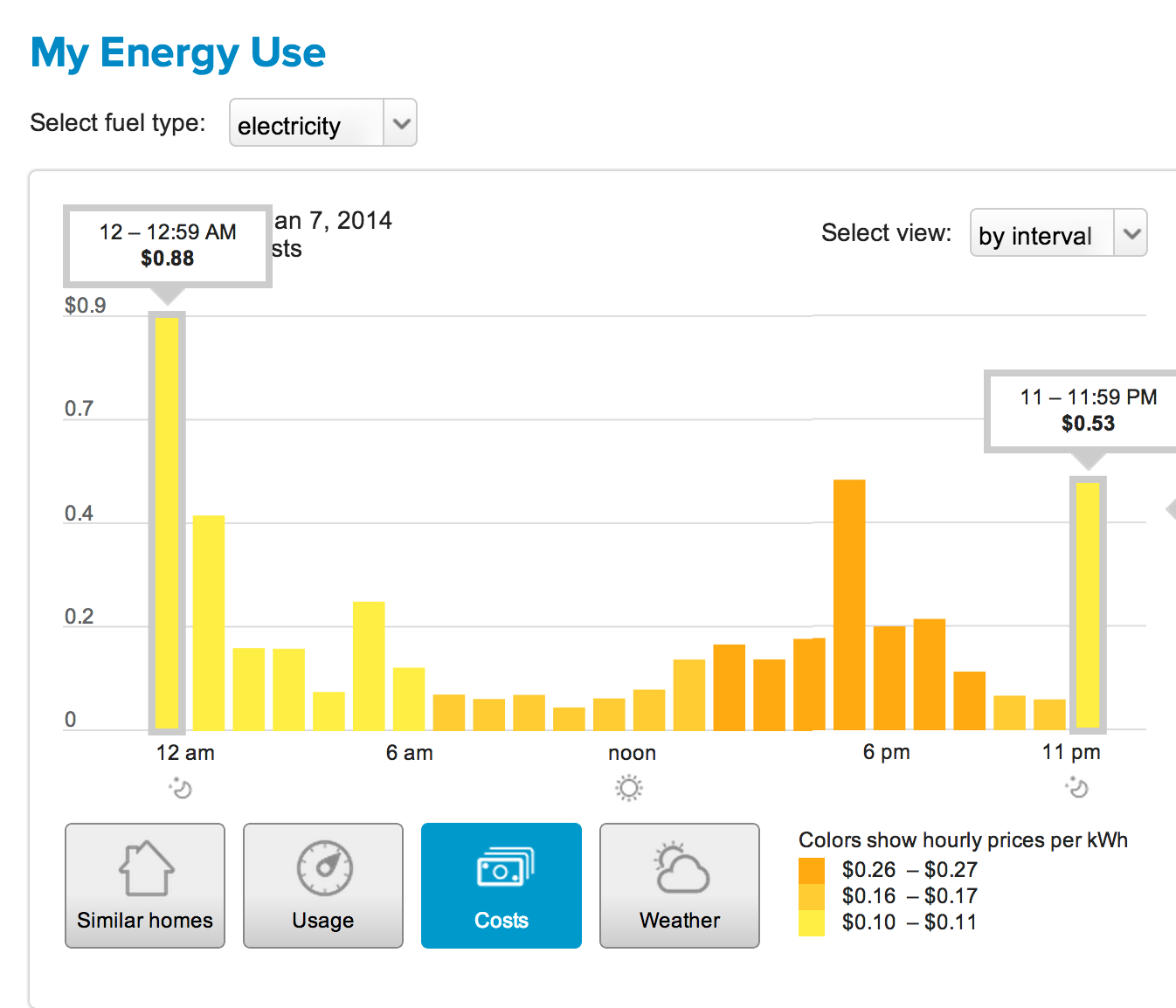 This is our peak use. 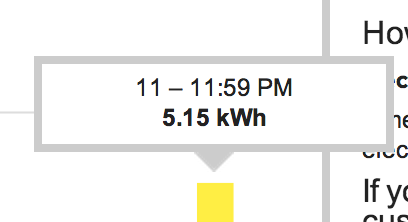 So the rest is for normal household use. In short, not counting for car charging, we are paying about 1/3 to 1/2 of what we were paying before.

How about usage during the higher, "peak" PGE Hours. Well, it cost us around 1/2 a dollar to cook a full meal dinner using all the stoves and oven. 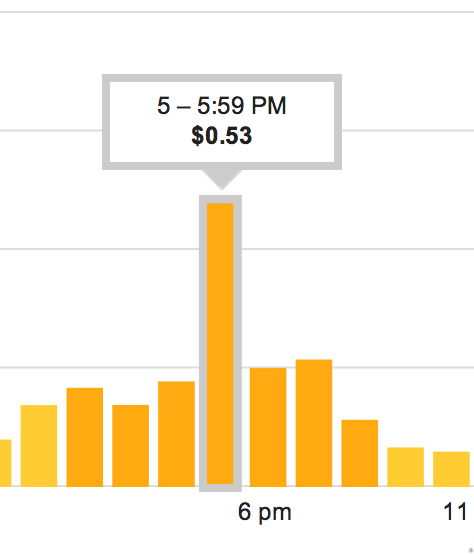 Obviously we had to make some changes. The only real major change we made was laundry on Saturday before 3PM. Car charging takes place after 11pm. All new cars have built in timers so they kick in at their times. My commute cost less than $1.50 in electricity to cover 50 miles a day. That is now a real bargain.

There you have it. My little overview on the EV-A rate. Hopefully, my usage experience may help you decide to change your rates if you happen to be an electric plug-in car owner.

Posted by fortysomethinggeek at 6:56 AM