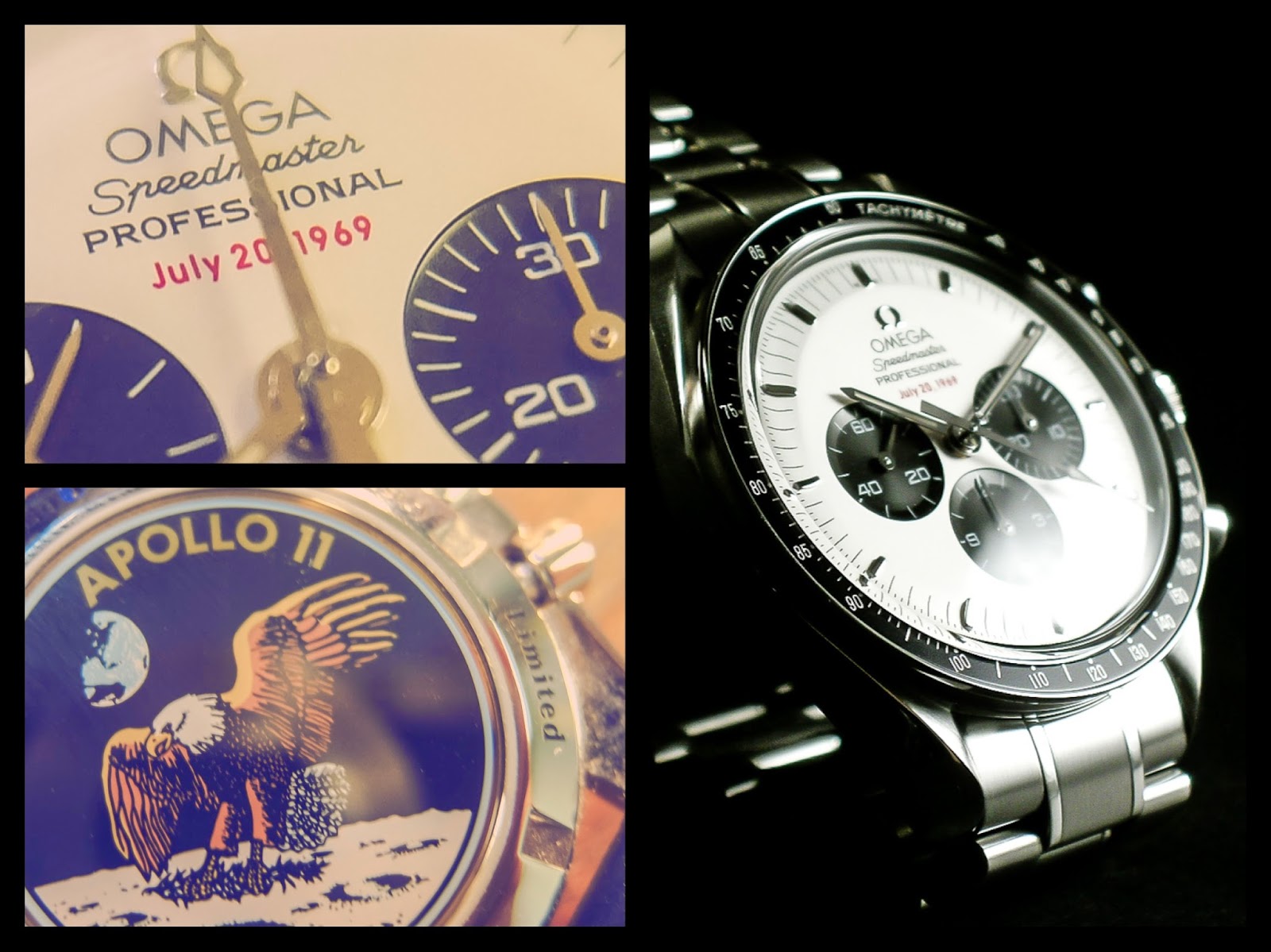 I'm reminded by this every other day. I own a few Omega Speedmaster Professional "moonwatches." The one pictured above is the 35th Anniversary, limited edition commemorative edition. What makes it unique is the Apollo 11 mission patch and unique white dial. It also has the date inscribed on the dial; marking the famous July 20th, 1969 date. So, I guess you can say, I'll never forget that date despite the fact I wasn't even alive then.

Thus this post is a reflection on the Speedmaster Professional. It isn't specific to any model or limited edition versions. Just the Speedy Pro, in general.

But if you are interested, Omega just released the 45th Anniversary in a rich chocolate finish with an nylon strap. It looks pretty good. Limited to 1,969 pieces. 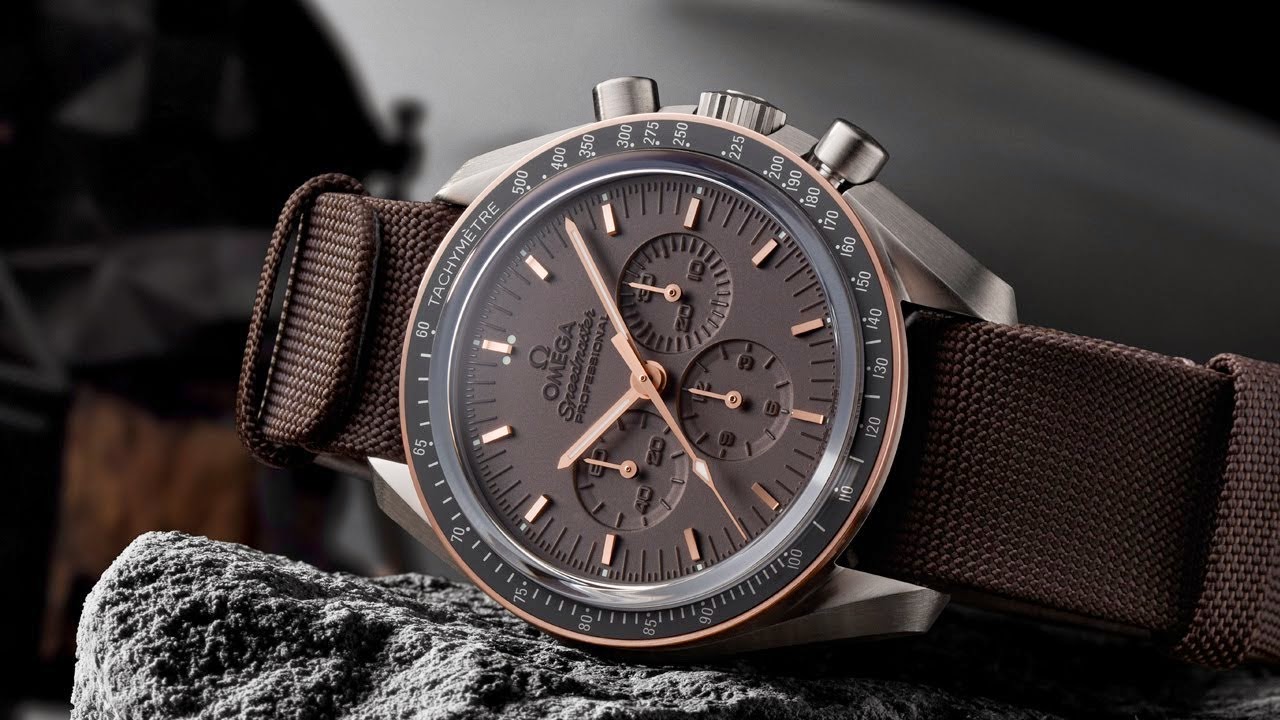 The Speedmaster Professional is a really great watch. Despite all the furor and talks about smart watches these days, nothing compares to a finely designed and crafted Chronograph. The Speedy, in my opinion, would be in the top ten of the greatest chronographs ever made. 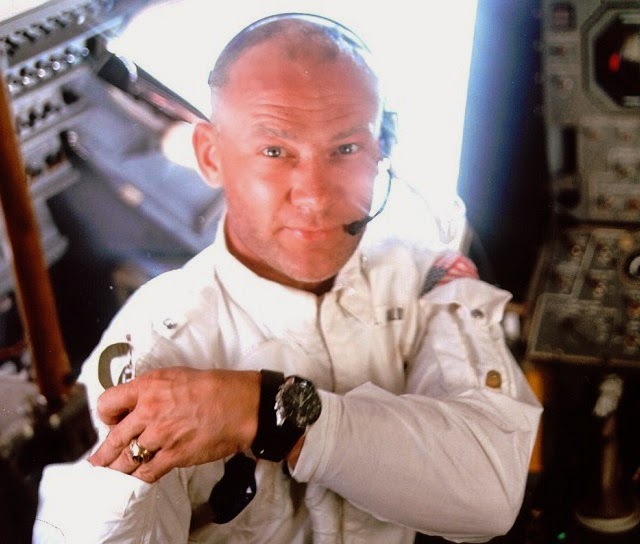 Then there is all this talk about sapphire crystals and who and what will be using it in our new smartphones and watches.

Well, the (original) Omega Speedmaster has neither of those things. No electronic doodads or flashy sapphire jewelry crystal. Sapphire is awesome no doubt but in space, it has no place. It has what you call "hesalite." Basically, a synthetic acrylic crystal. Why? To deal with sub zero atmospheric pressure. If sapphire cracks and breaks in outer space, it has a high probability of puncturing a space suit. It is also anti-magnetic, anti-vibration which comes in handy in those multiple G-Force rocket launches.

The Speedmaster has and is worn on the outside of a spacesuit as you see below. They are rigorously tested and is flight qualified by NASA (and other Space agencies) for EVA; Extra Vehicular activity outside of the space ship. 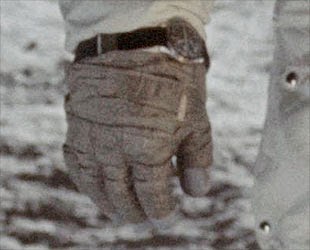 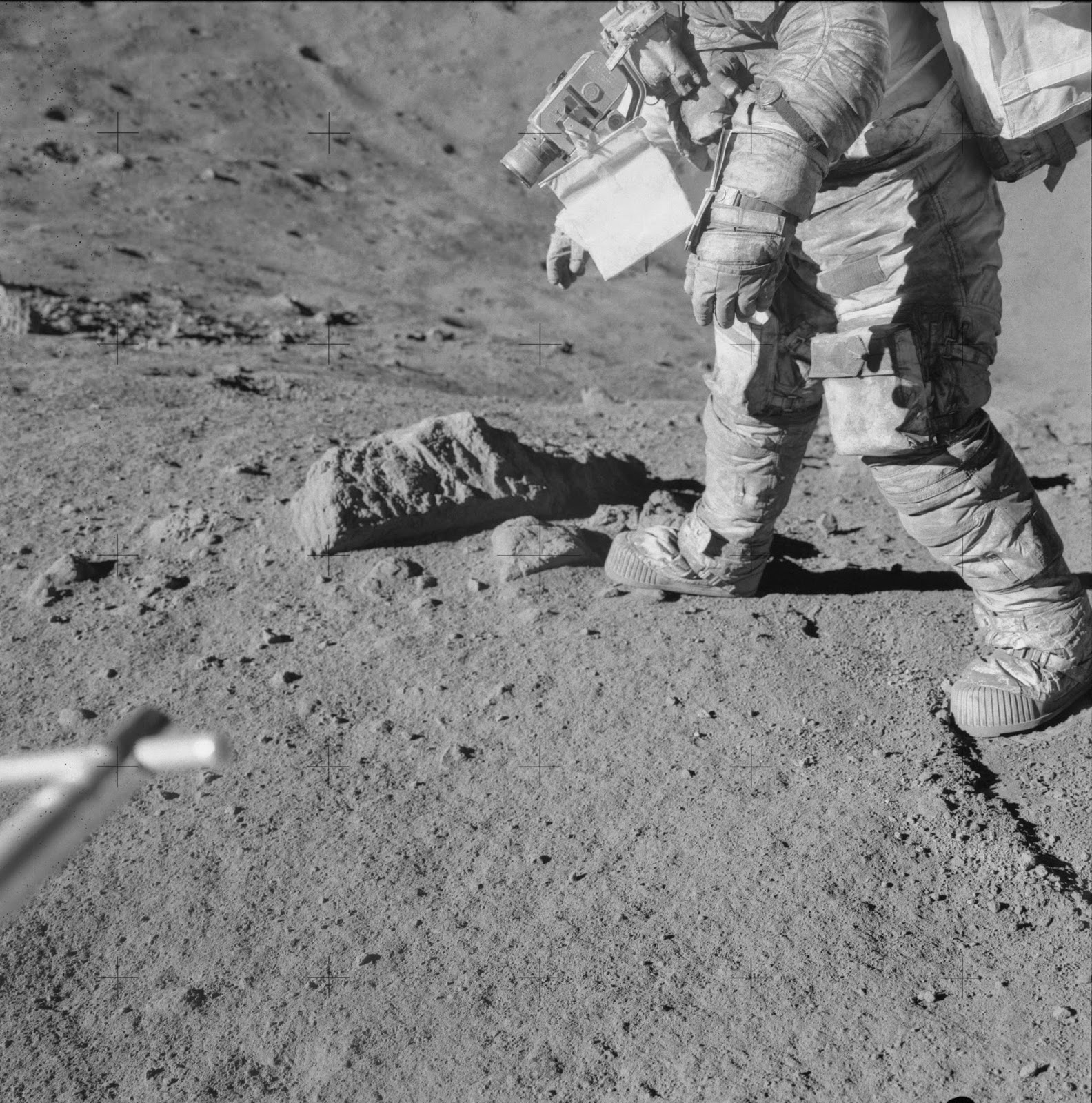 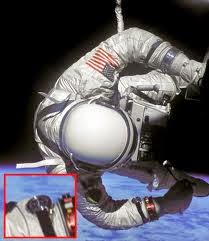 The movement is incredibly robust. Depending on the vintage, it can either be a Cal 321 or Cal 861 Omega movement. Cal 321 being the original vintage and after 1968, all Speedmaster Pros sports a Cal 861 (or one of it's derivatives).

The watch is a manual wind affair; meaning it doesn't have rotor like many automatic movements. I actually prefer it this way. There is a sensual joy of winding it up every morning and the fact it has no date complication is even better. As I alternative between watches in my collection, I don't have to worry about setting the date if I haven't worn it in a week. 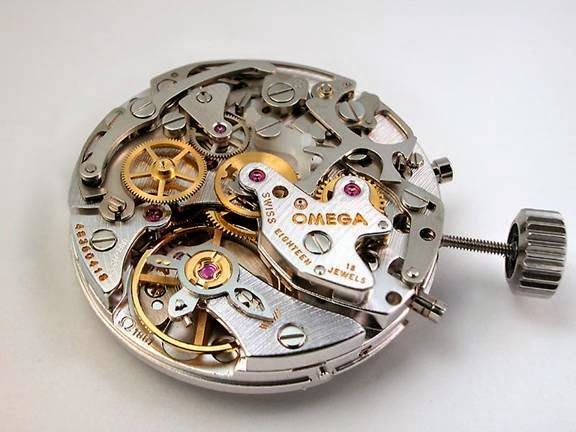 NASA did rigorous testing - heat, cold, and all that in the 1960 and the Speedmaster came out on top. It is very robust for space applications. And the fact that it has hesalite crystal is a big bonus for the aesthetics.

Why is hesalite better in this watch? Because at certain angles, it gives it a nice aura, a soft vintage reflection or as some would say, a glow. However, looking straight on, the dial is matte and not glossy like some sport watches. It is incredibly visible. I guess you would say the non-reflective matte dial is paramount for visibility when an astronaut is doing space walks with the big fat Sun in the background. They obviously don't want any glare. 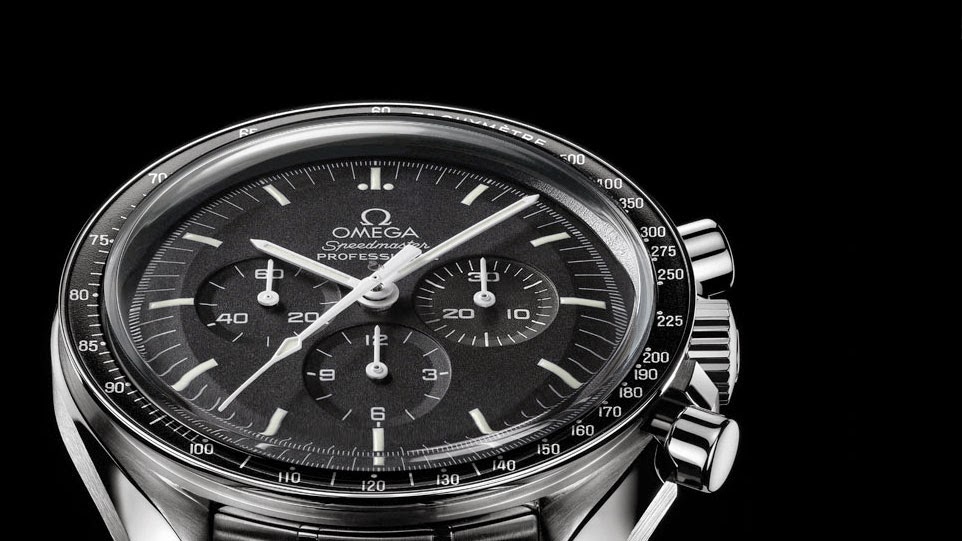 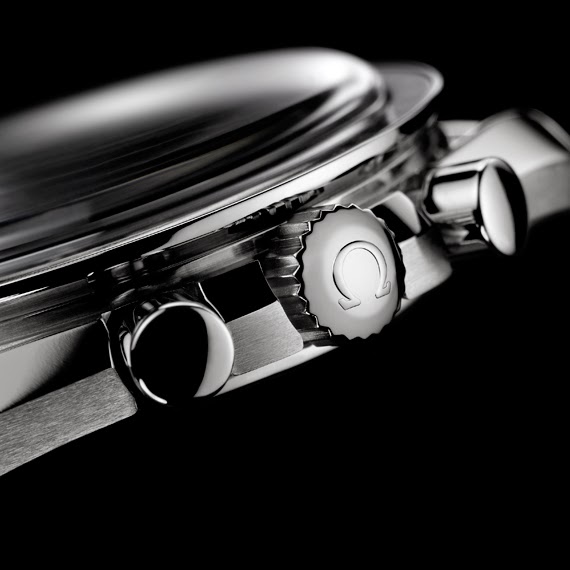 If the crystal gets scratch, you can usually clean it up with toothpaste or some soft abrasive. I'm not saying you should but that is what I use on my Speedmasters. I have one that is over 20 years old and the crystal is still in working order. Then again, if you are not a purist, Omega does sell a variation with a curved sapphire crystal. It just wouldn't be right calling it a Speedmaster Professional. Thus, some of those models are just part of the regular Speedmaster line.

Yep, the Speedmaster Professional is all that and more. One bad-ass watch that every serious watch collector/tech geek should have in his collection. Below is the 45th Anniversay case back. 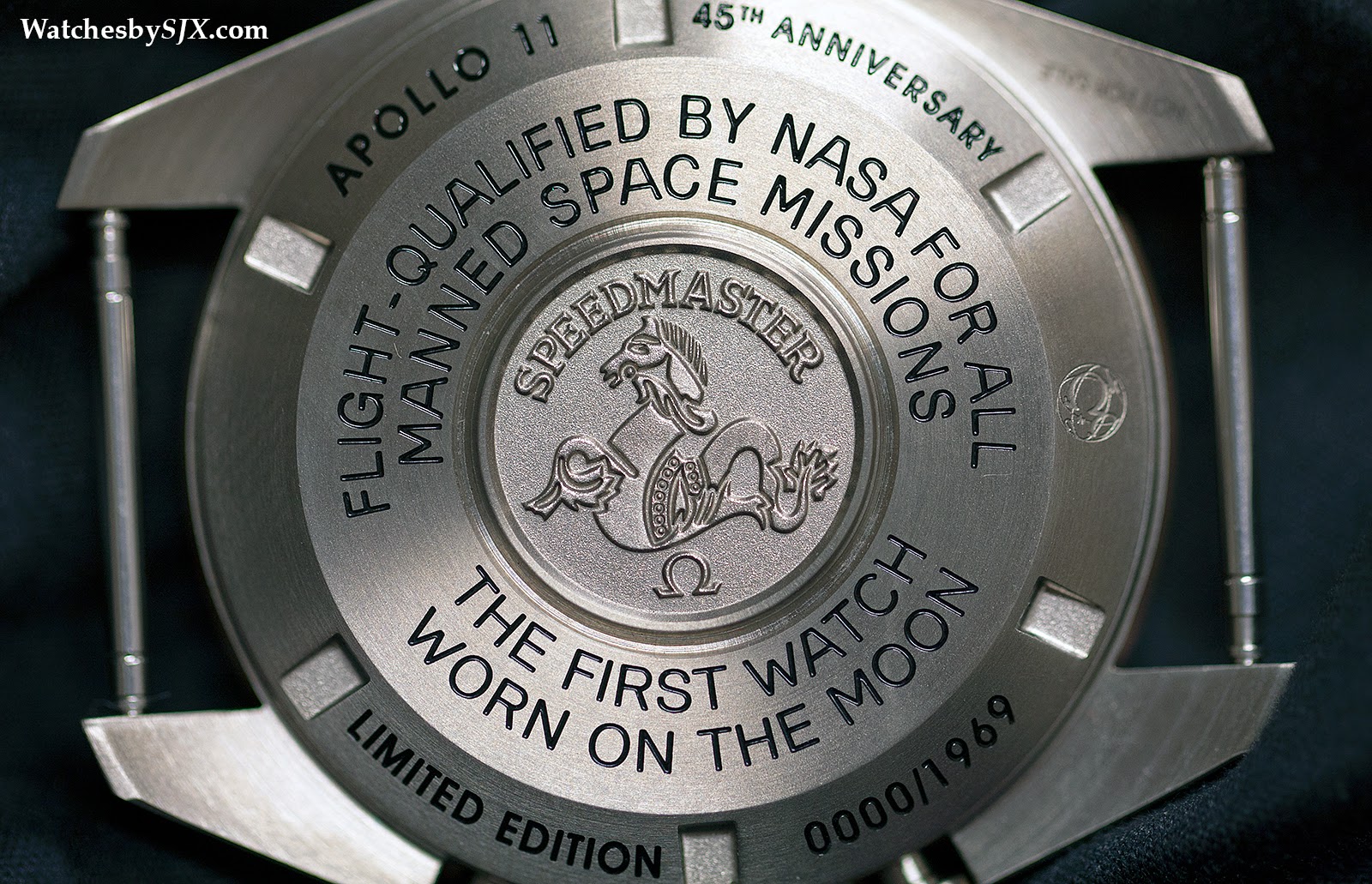 I'm going to close with one point. Timeless.
Introduced in 1957. It still looks modern andcontemporary; transcending generations with a rich illustrious history. There is no doubt there is a iconic history to it. A design that is close to 60 years old. What smart watch can compete with that? With all the talk about Android Wear, iWatch, what could they offer that is even comparable in terms of lineage. Being able to run indefinitely without ever being out-dated or replaced. Or have the ability to pass down two, three generations within a family. Many Speedmasters have even appreciated over time. In general, they keep their value and increase. No other electronic gadget can say the same. Thus, I guess what I am saying, as a geek, I am an old school hold-out when it comes to watches.

Posted by fortysomethinggeek at 8:19 AM