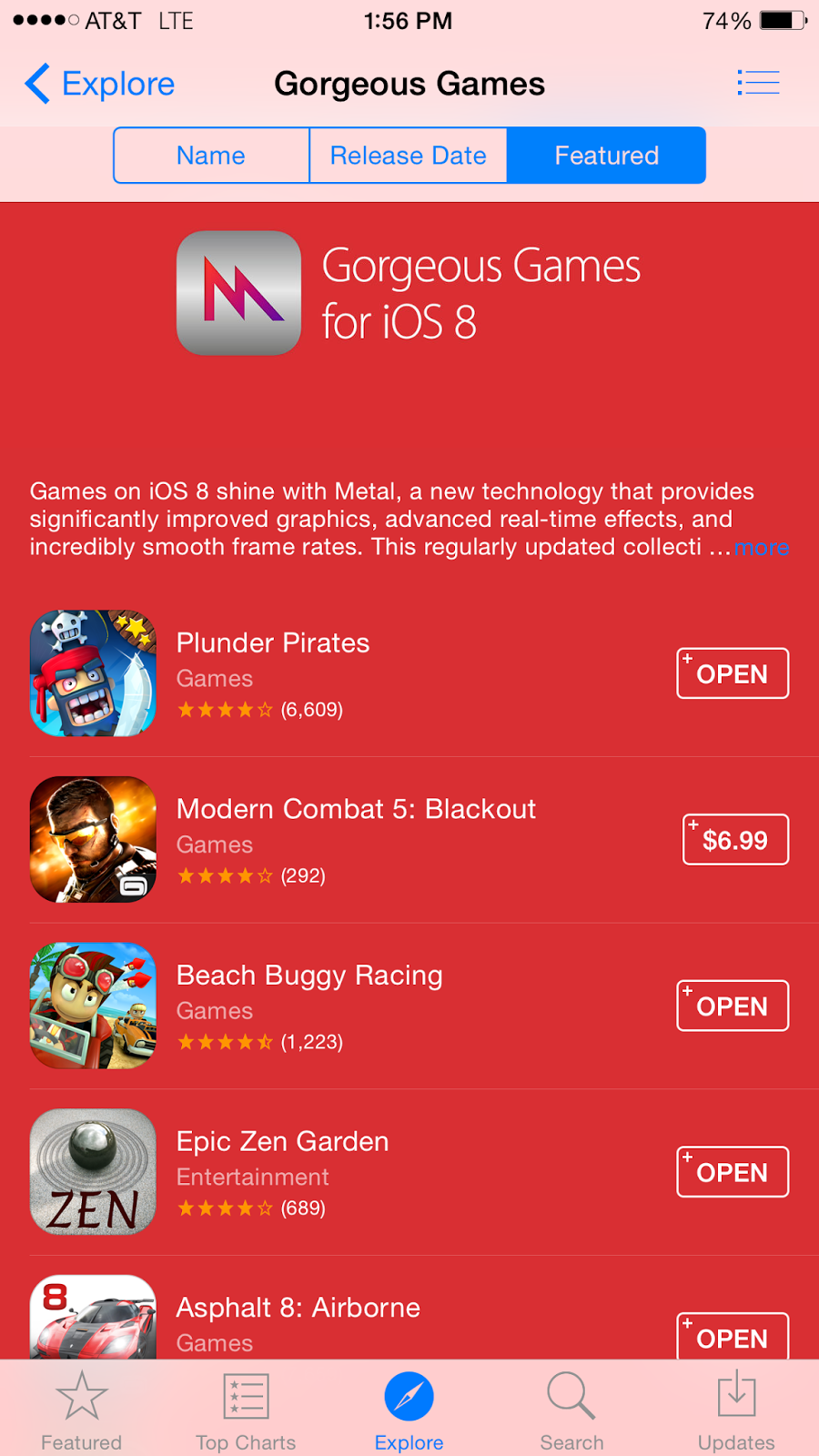 With the release of iOS 7 and iOS 8, Apple introduced a new bare metal graphics API. This new framework promises to give iOS an edge in mobile gaming. So how does it compare to a standard Android Flagship running something like the SnapDragon 801 SoC? The new A8 chip on the iPhone 6  Plus is indeed a powerhouse. Well, I took it for a spin and compared two cross platform games that has Metal support on iOS. These are merely screenshot comparisons as I played some games on both platforms.

I think comparing the HTC ONE M8 to the Apple iPhone 6 Plus is a fair comparison. Both are driving 1920x1080p resolution. Both were set at full detail max resolution gameplay.

Here are some screenshots.

On the first track, at launch, you can see the iPhone has some extra details. The other racer's launch usually has a flamed induced burn-out. Everything else is the same. The texture mapping and polygon count on both platform are the same. You are not going to see anything majorly different. 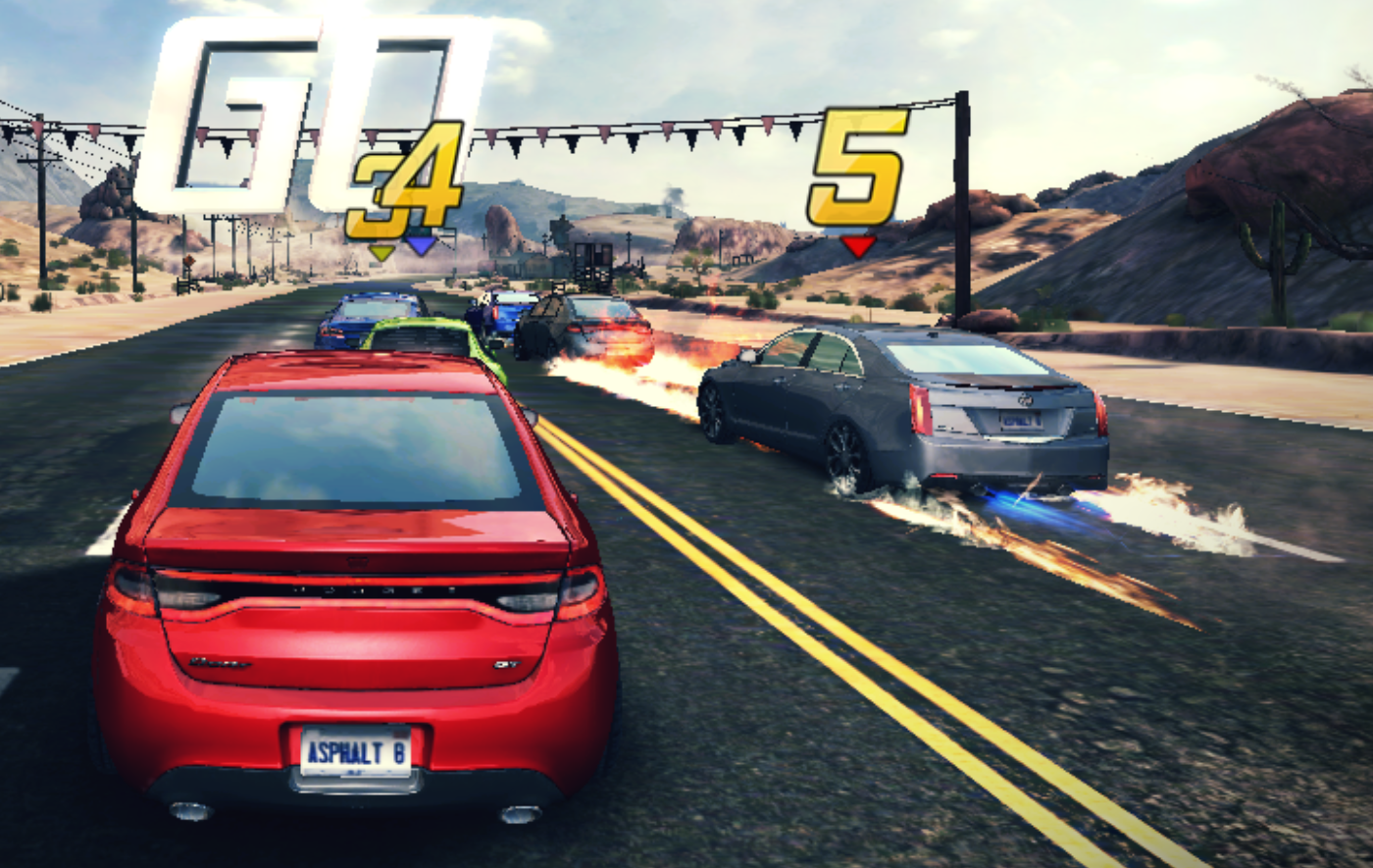 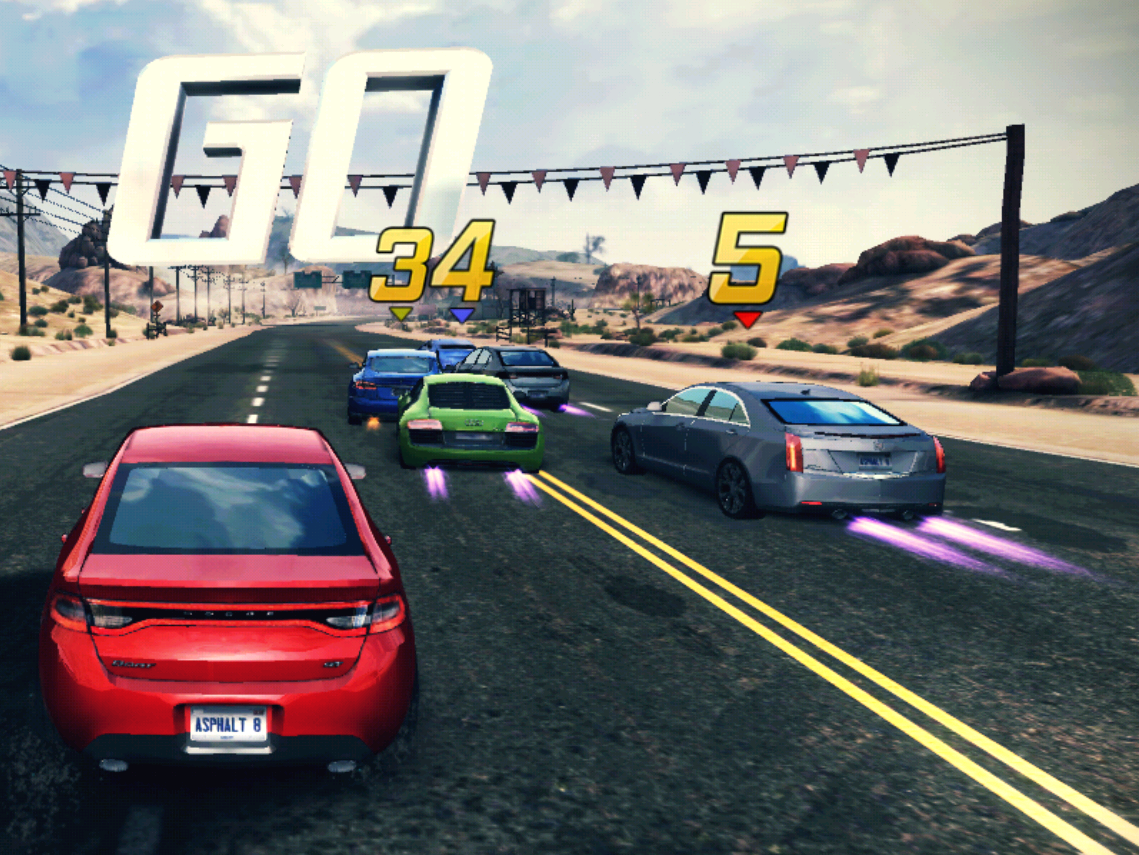 Next, the HTC suffered from serious banding on the canvas. You can clearly see the gradient banding in the blue sky. It is throughout the game. Here is an example. It is very obvious where you see the blue sky. 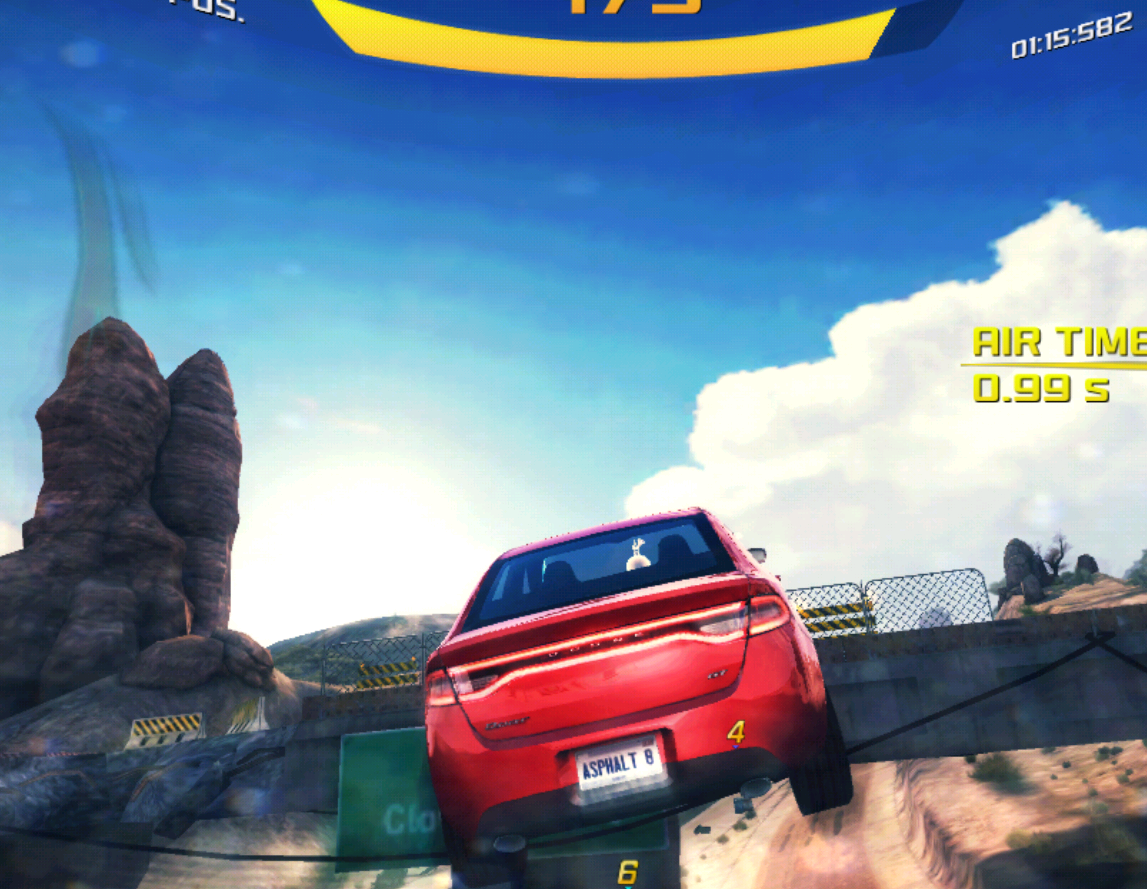 This isn't visible on the iPhone 6 Plus running iOS 8.0.2. Here, you can see the sky fairly clean on the iPhone. Also, if you pay attention to the rear bumper, there is a detailing like the dirt on the bumper. 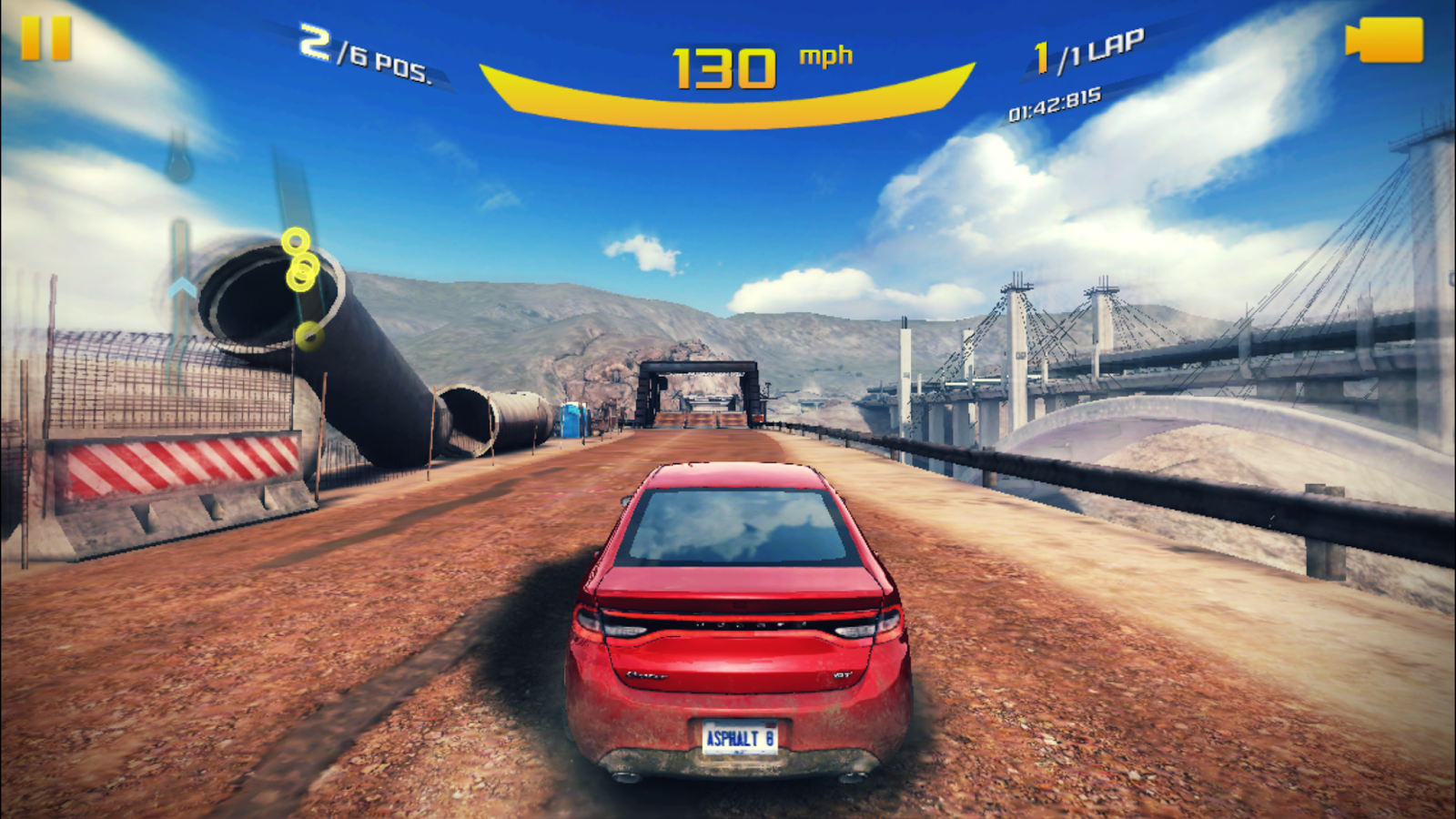 On the HTC, again, you can see the heavy banding in the blue sky. Also, the bumpers always appear to have some sort of motion blur effect to make up for the fast motion. On the iPhone, the vehicle is usually very clear and detailed. Come to think of it, the roads have much more detail. There is simply too much motion blur going on with Android. I'm not a gamer so I can't explain the difference. Maybe the iPhone is faster at rendering the finder details but it does look sharper on iOS. 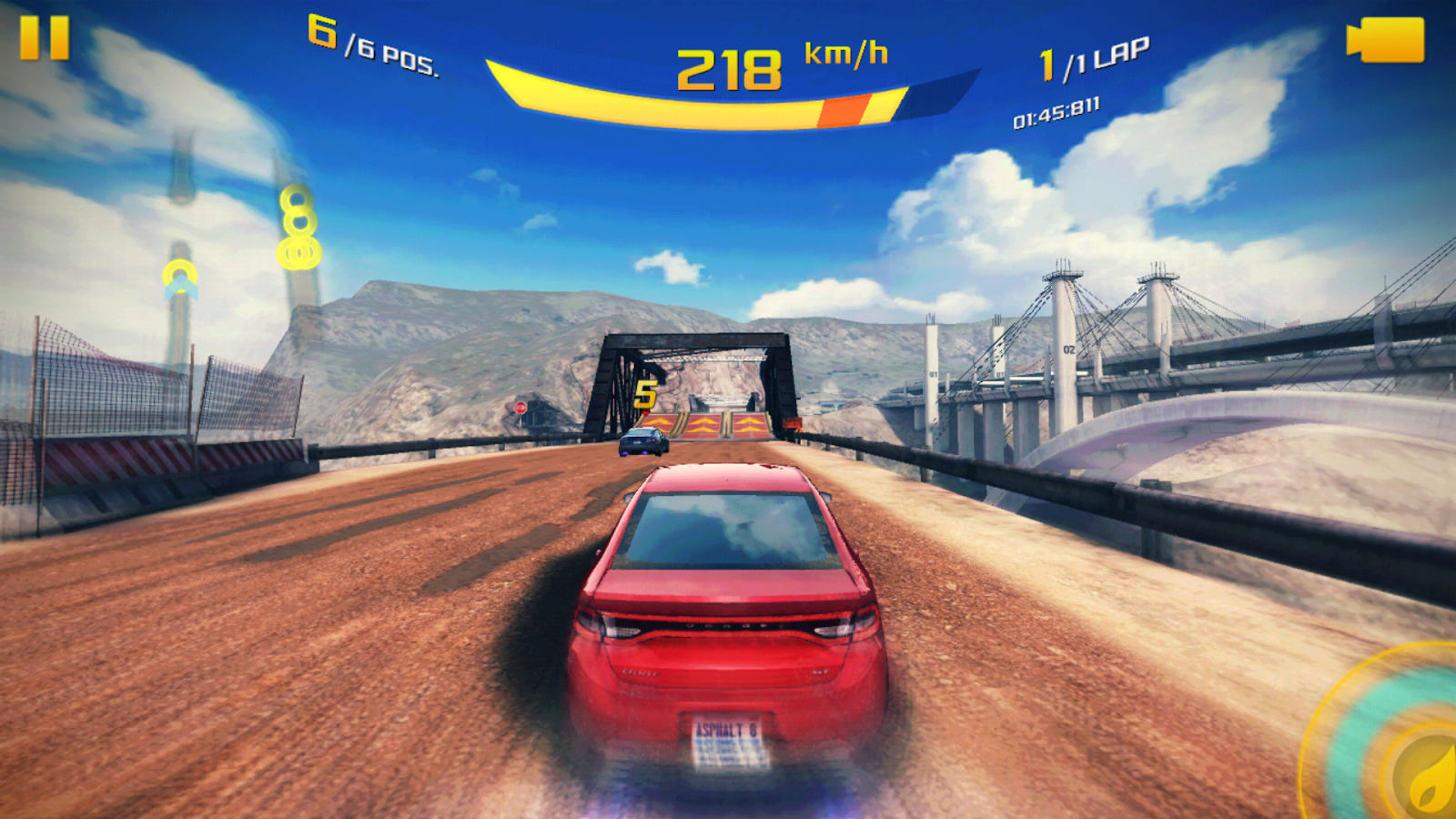 Here we have the tunnel run right before the finish line. The first shot is of the iPhone 6. 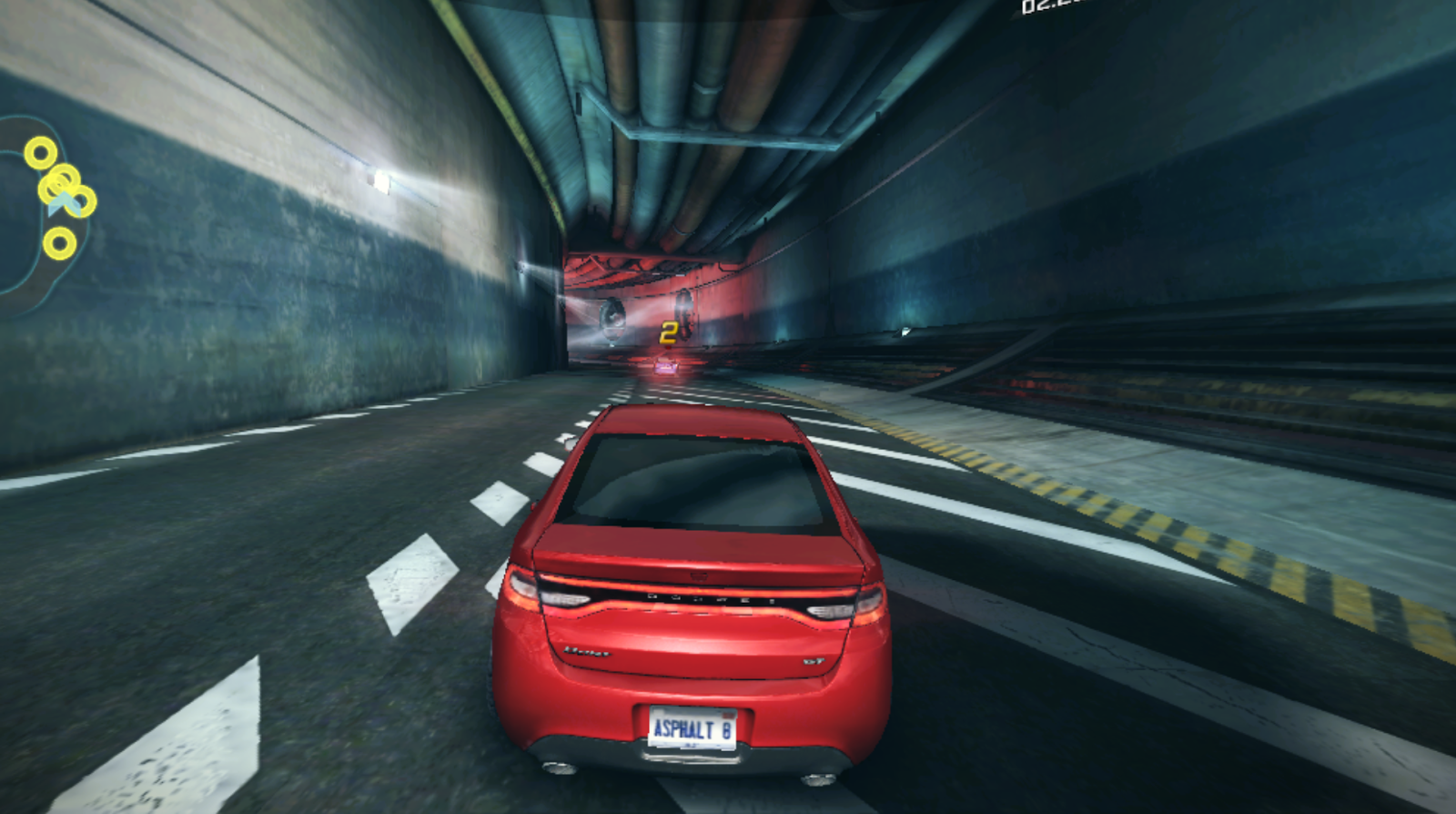 Here is the HTC. There isn't much of a difference to declare the iPhone a clear winner. There are some detailing like the non-blurred bumper of the iPhone and the road detailing but not much. Gameplay will be the same on both. I don't think Gameloft did any real optimization as I suspect they want to target for the lowest common denominator. Here, I am not really swayed one way or the other. For a gamer, maybe the extra details makes a difference.

They're comparatively the same.
First is the iPhone and the second is the HTC. I should also note, taking screenshots while playing is very difficult. I couldn't get it to match the scenes exactly. The screens on the iPhone came out brighter and I don't know why. They're simply better lit on iOS. 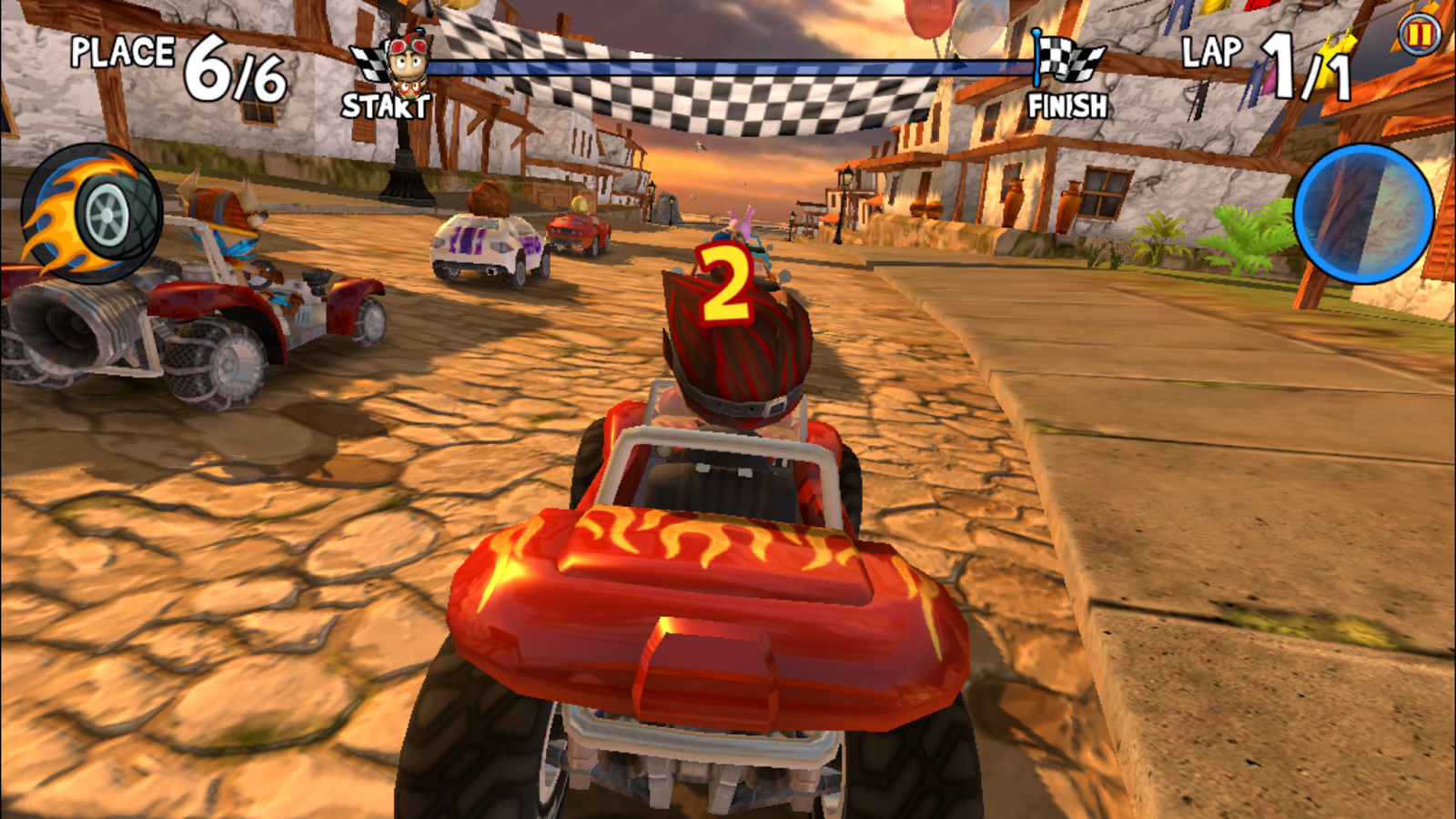 There were only two instances where I notice any difference in graphics.

Shadows. The iPhone showed more shadows from the side street bench, lamp posts, and buildings.
There are some extra smoke and the competing racers have extra detailed shadows. On Android, the shadows were not opaque enough. Everything else is pretty much the same. Again, I am looking at the polygon count and low-res texture mapping. There isn't much you can do. 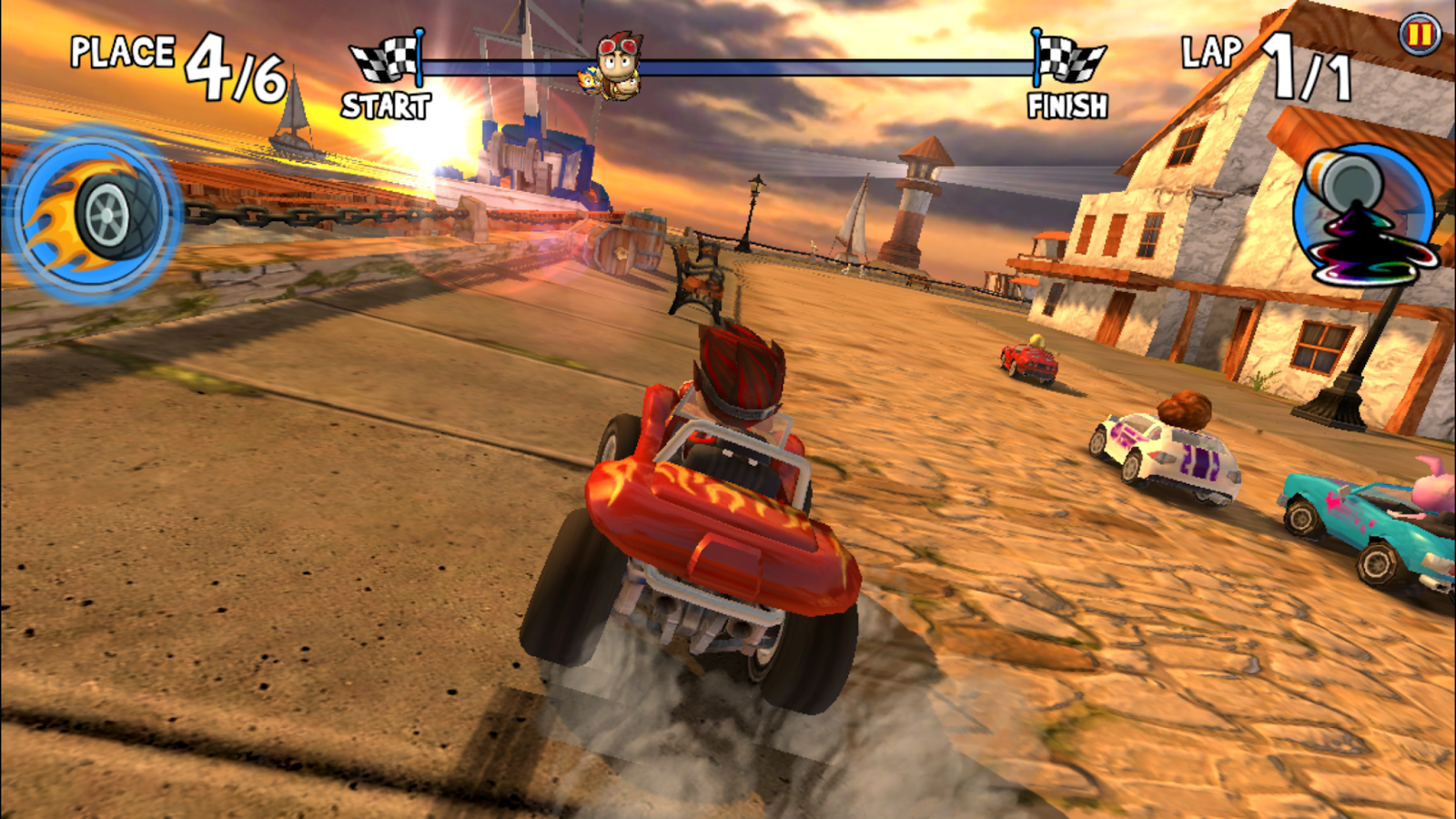 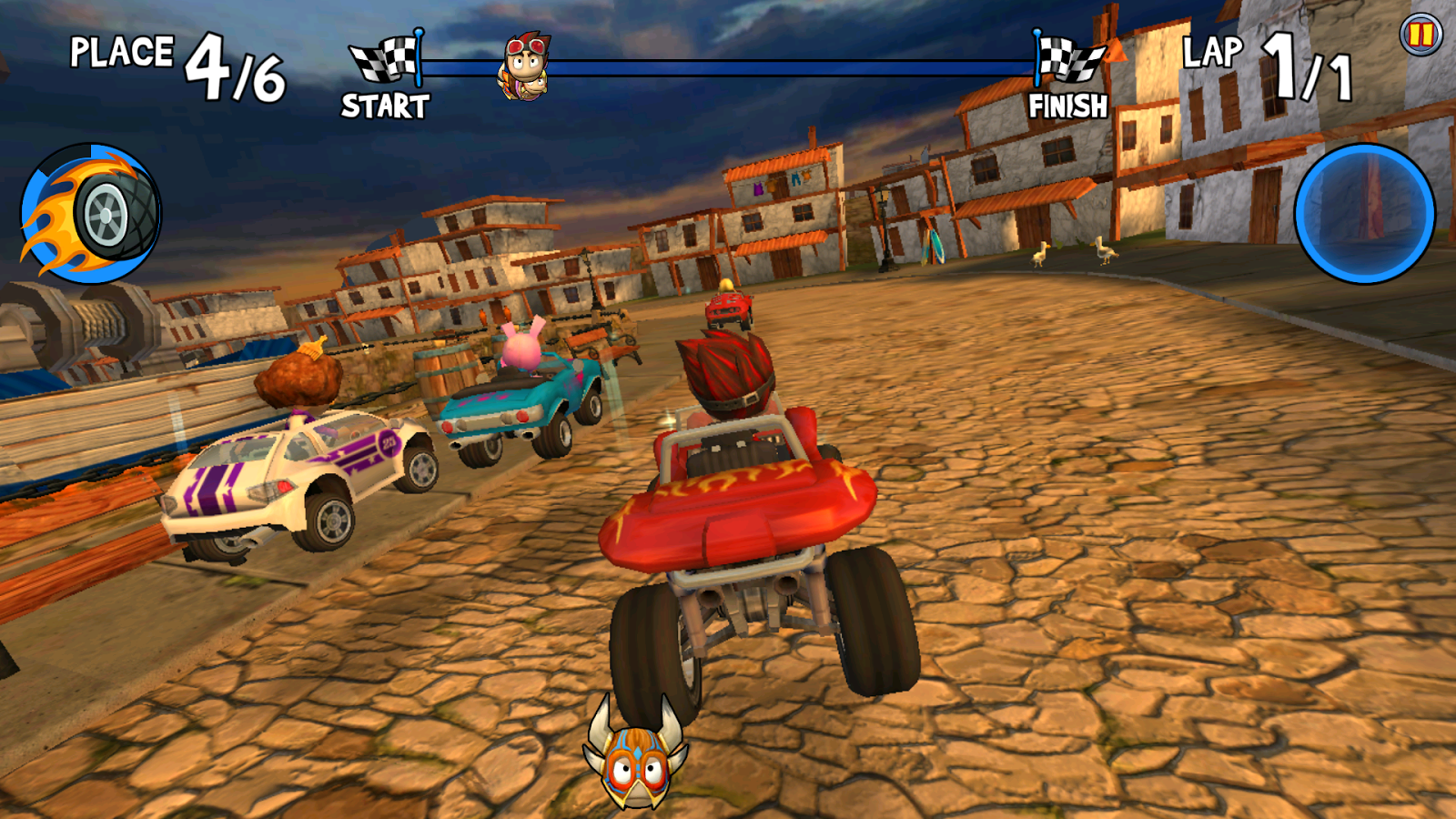 The other major difference I saw again, had to deal with environment shadows. On the first track, near the end as the racers end their round-a-bout toward the finish line, the iPhone shows shadows from the large tree on the left. This is completely absent on the HTC.

The first image shows the tree leaves casting shadows on the road. On the HTC, the road is pretty much shadow-less. 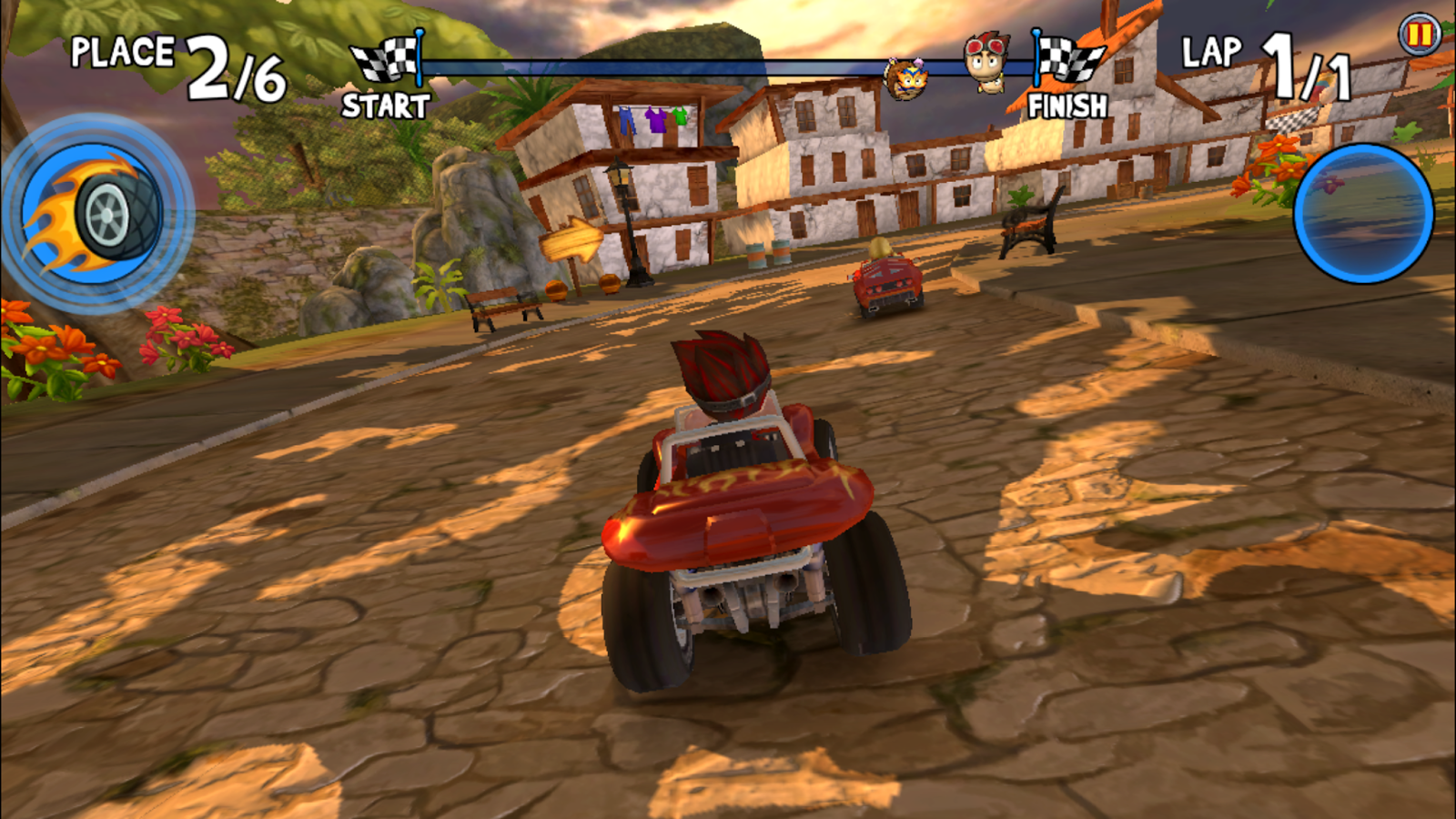 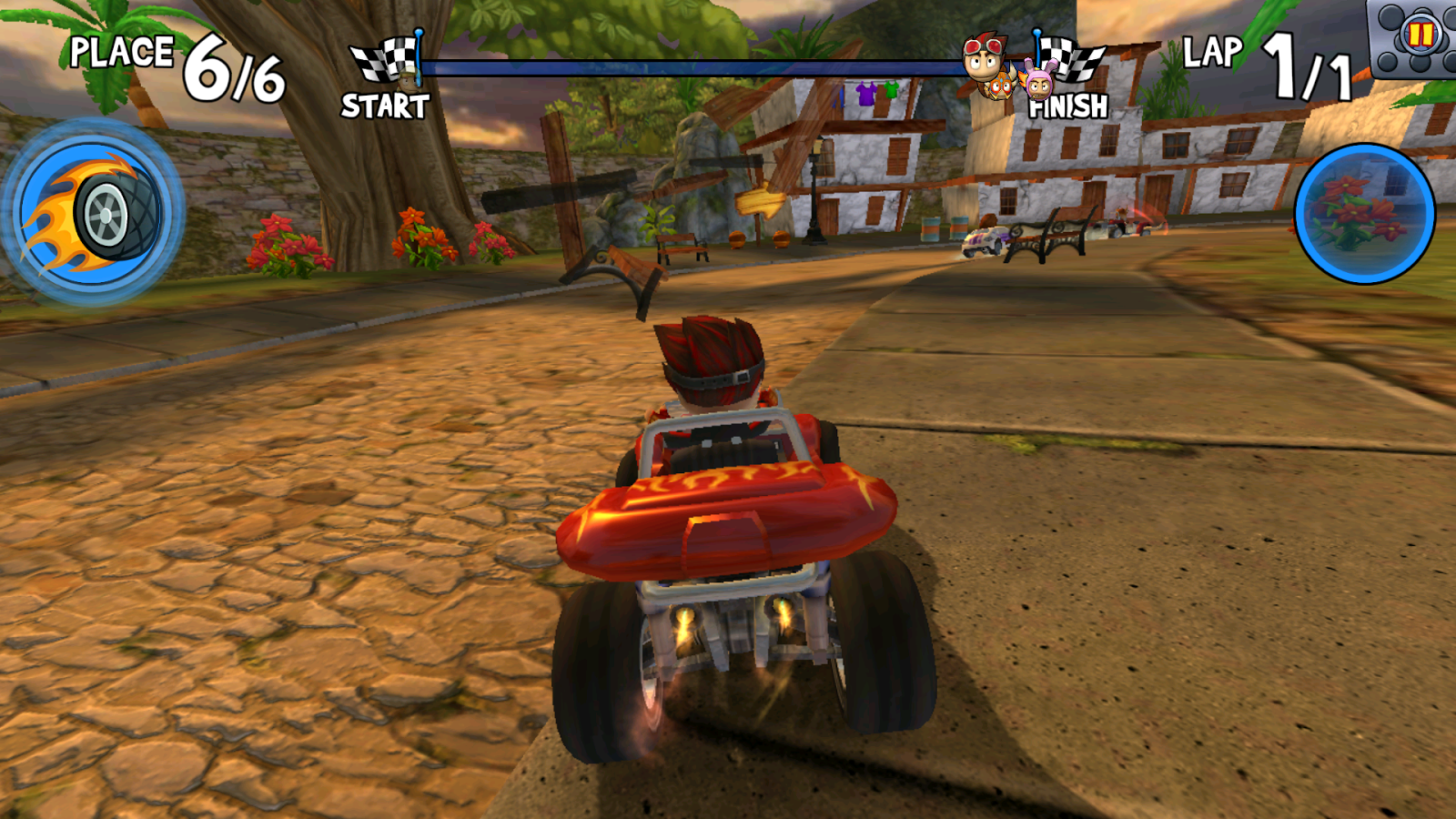 These are the only two games you can really compare at the moment. Metal shows a lot of promises but I don't know if that gives iPhone and advantage in gameplay when you have other players such as the Nvidia K1 Tegras and their own optimized games. Furthermore, I think both of these games were pretty much rushed with Metal optimizations for the iPhone 6 launch. I don't see much of a compelling difference in Asphalt 8. As for Beach Buggy Racing, the Android version was too laggy for me to make a conclusive decision.
Hopefully, we will see some optimized games. Here are some screenshots from Epic Zen Gardens on the iPhone 6 Plus to give you a glimpse. 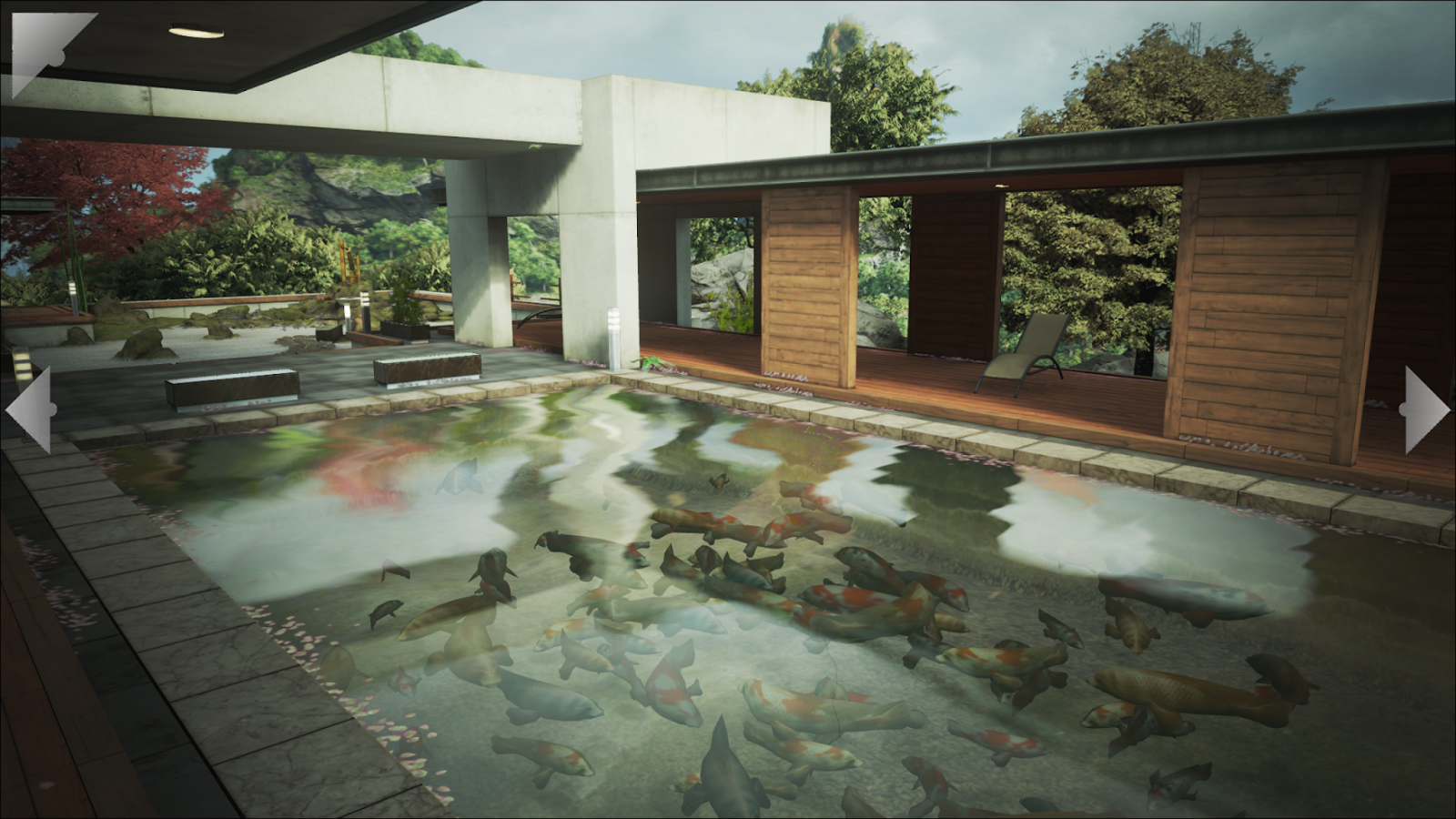 Posted by fortysomethinggeek at 5:23 PM

Email ThisBlogThis!Share to TwitterShare to FacebookShare to Pinterest
Labels: Graphics, HTC ONE (M8), iOS, iPhone 6 PLUS, METAL, SnapDragon 801, versus