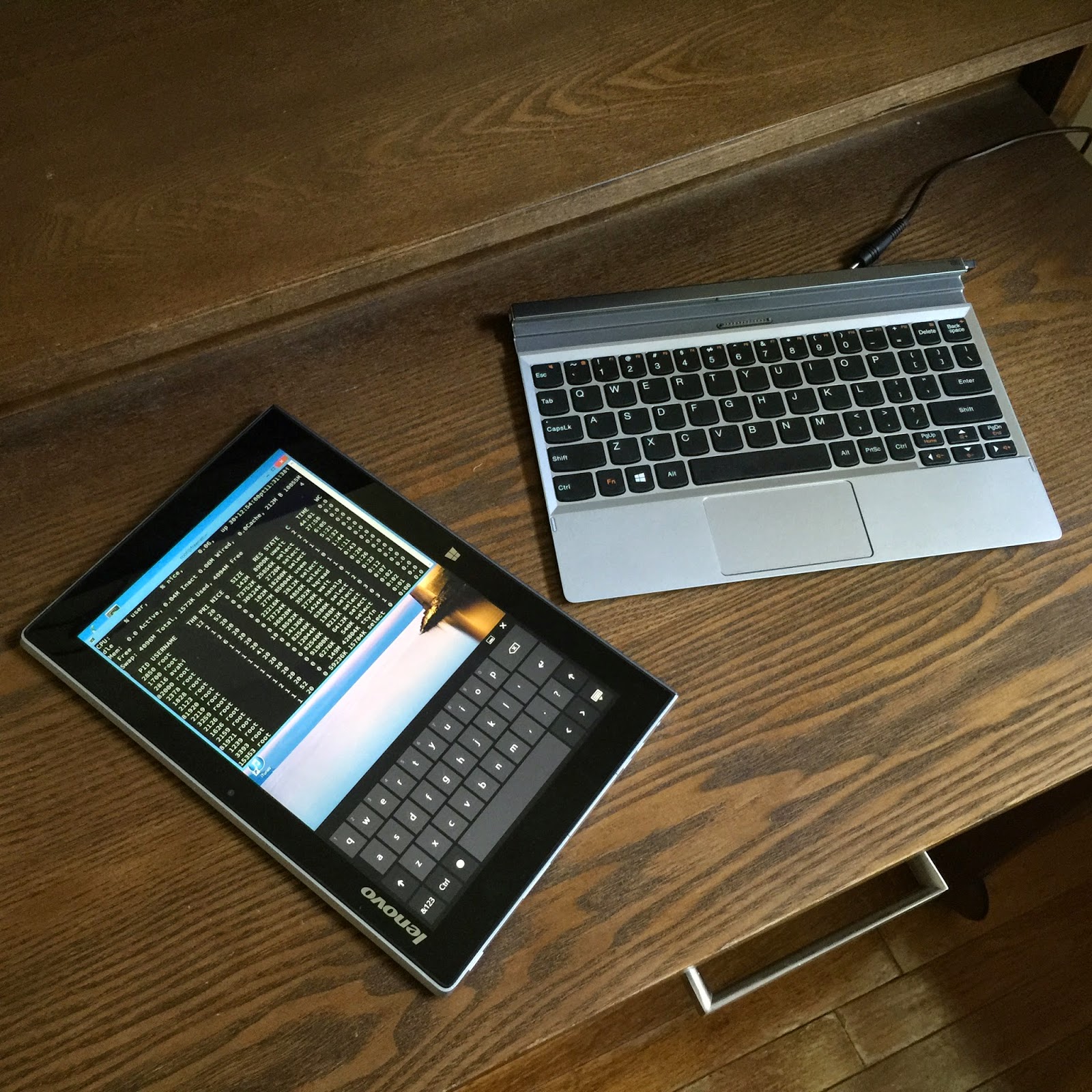 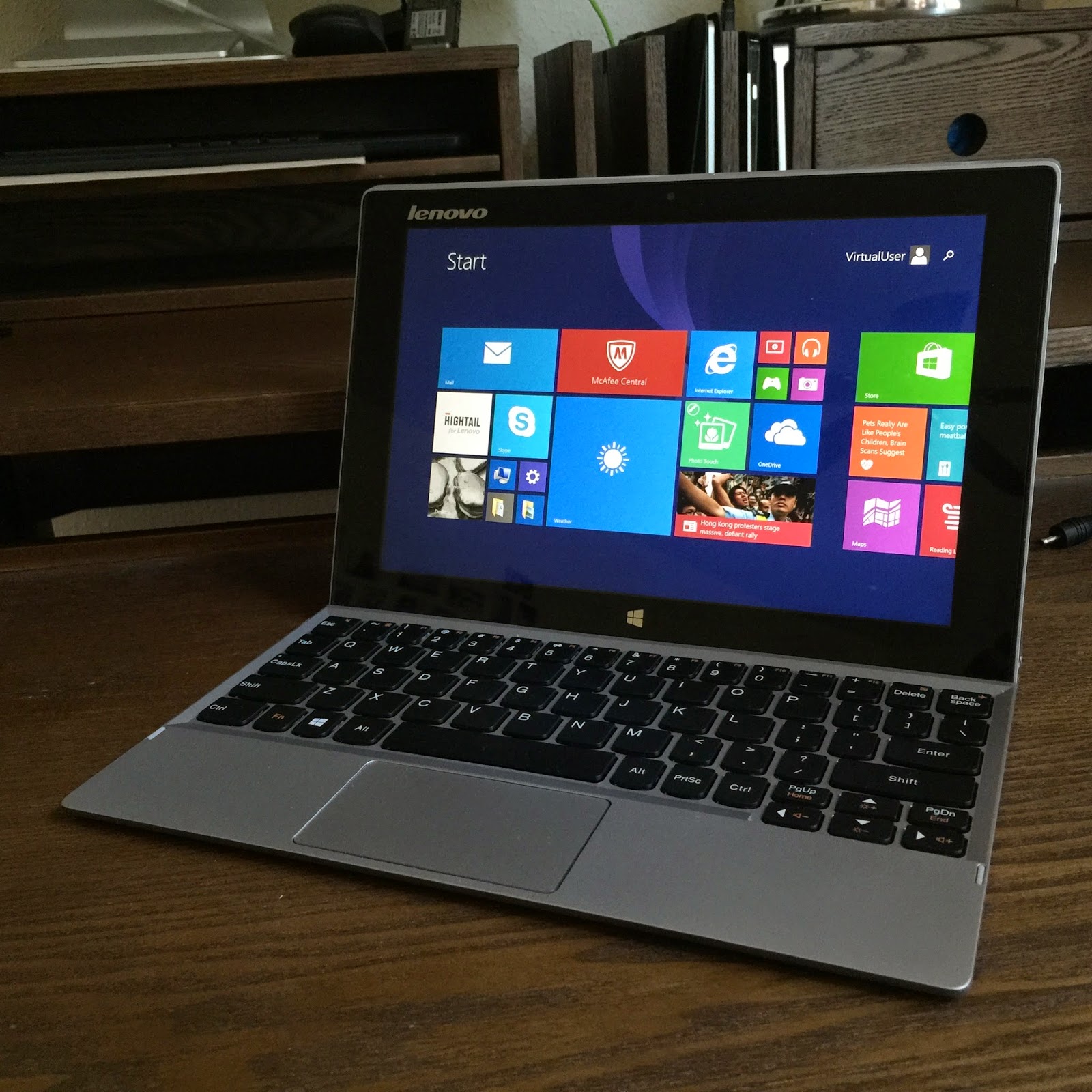 Here are the specs:
10 point multi-touch FHD screen (1920x1200)
1.33 GHZ ATOM Z3740 QUAD Core Processor
2GB RAM and 64GB Flash Storage
ATOM Bay Trail has been proven to be a popular platform and there many choices on the market such as the ASUS T100 Transformer.
However, what makes this competitive is the 16:10 1920x1200 IPS screen on a 10.1" form factor.
The ASUS may actually be a better value for most people as it has a superior keyboard and USB 3.0.


However, I really do not like 1336x768 screens so I got this one. The screen resolution is a really compelling difference for my needs. 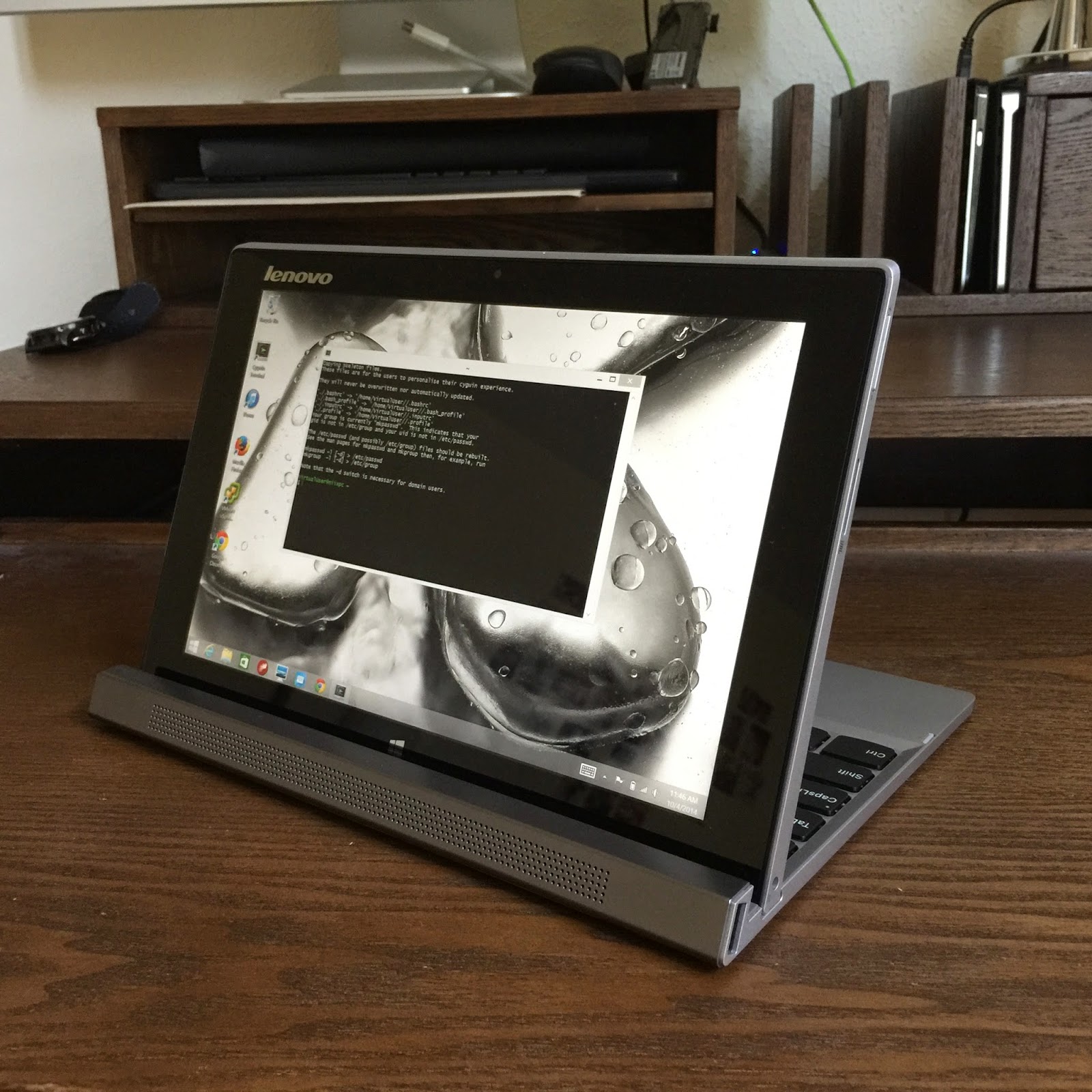 The corners are very sharp; making it hard to hold at length. The screen isn't quite that bright as I would have hoped. Most importantly, the supplied keyboard is really finicky, laggy and not that pleasant to use. The Tablet docks into the keyboard via magnets and it has a fixed angle. Sometimes, the keyboard doesn't quite engage and you have to re-dock until you get it to work. This is definitely not something you can easily put on the lap. If screen resolution isn't important to you, I suggest shopping for an alternative like the ASUS or Dell Venue 11s.

The tablet has micro USB and HDMI on board. It can be charged via USB or via the supplied charger. The keyboard provides a small speaker along with two USB 2.0 connections. USB 3.0 is a pretty big omission. 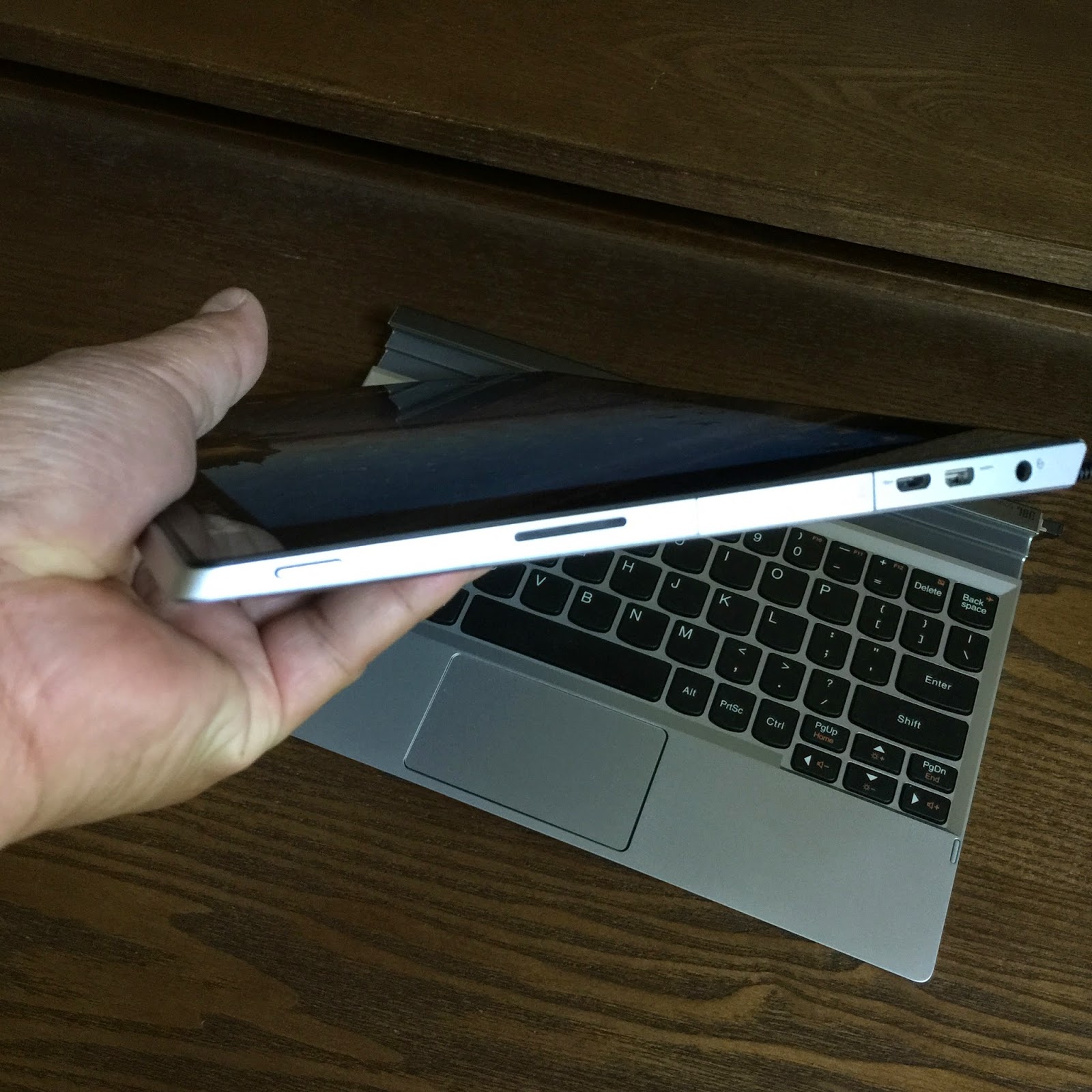 I am pretty much replacing my Chromebooks with these inexpensive Bay Trail devices. I've gotten to a point where I can make Windows 8.1 passable for my workflow. The 8" tablets was simply too small to be effective. The improved screen size is well worth it. I'm basically using these for low-powered, long battery life field use. I've been using Cygwin for my UNIX/LINUX POSIX shell compatibility. I've given up any hopes of a decent Linux based Tablet hybrid. Thus, Windows 8.1 is still really the only game in town in this form-factor. Some of the apps on Modern UI have been improving. They still don't match the iPad and iOS for my productivity requirements. As a result, 90% of my interaction is still in the Desktop mode. In short, I am really using these as laptops rather than as touch centric tablets.  The tablet functionality of Modern UI is just an added benefit.

I also have a Dell Venue 8 Pro which a similar ATOM SoC Bay Trail architecture. Since the Miix 2 has a larger screen to drive, it isn't as snappy or fast as the smaller Venue. This has been corroborated with various online benchmark and comparisons. However,  most people won't even notice the difference. 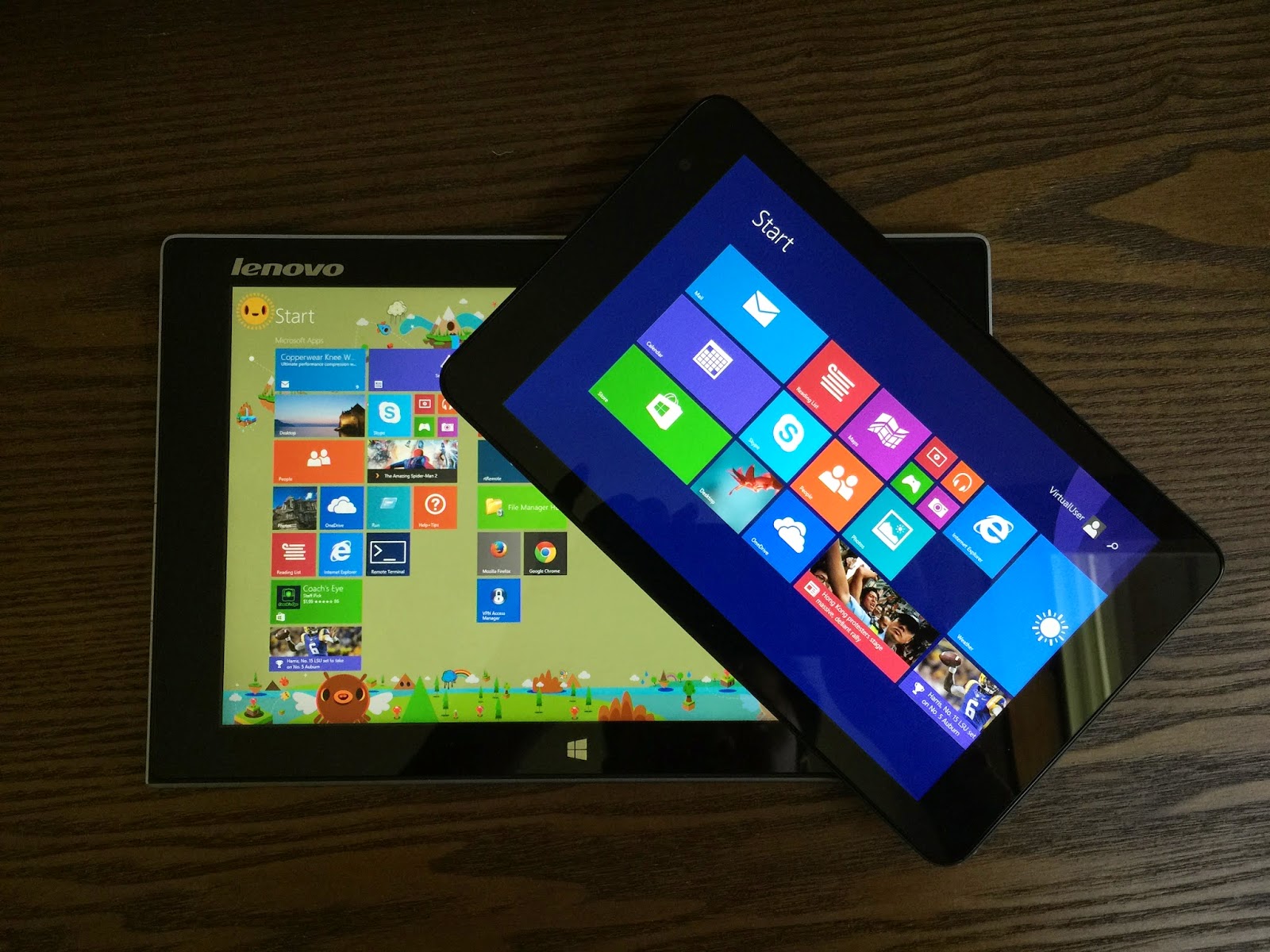 As I mentioned earlier, I mostly use this as lightweight laptop, ultrabook.Thus most of my time is spent in the Desktop.  Touch is still not really useable in Desktop mode. The problem is more compounded by the higher resolution screen. Despite having a larger screen than the 8" Dell Venue, I found that touch mouse control is much harder on the Lenovo.

HiDPI scaling is still iffy on Windows 8.1. Some applications work fine and some are just blurry. You can enable exceptions to HiDPI per applications but it isn't as smooth as OS X. 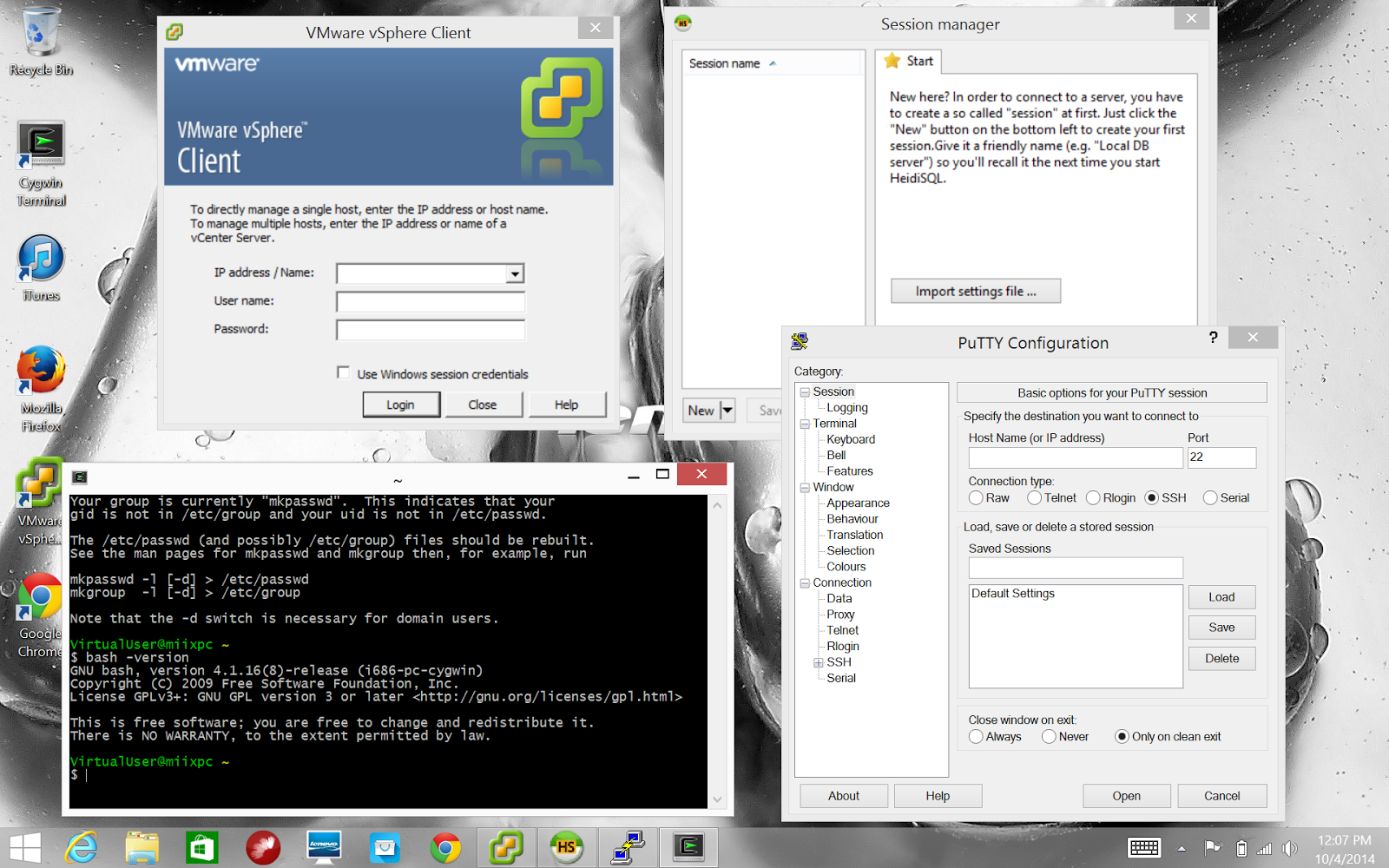 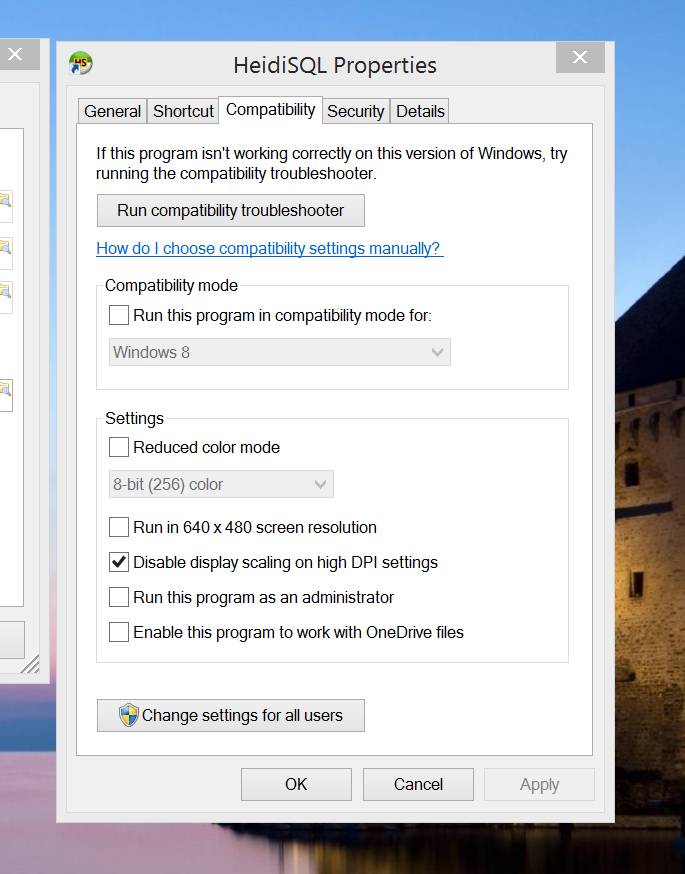 I've tried every possible scaling and font size and it still isn't quite there. The experience will be disjointed as 3rd party application developers need to update their programs for Windows HiDPI.

Using the standard 1.5 scaling on Windows, you'll get a very useable Desktop experience. The effective scaled down real estate is 1280x800. This is comparable to the Chromebook Pixel and the standard Macbook Pro 13" 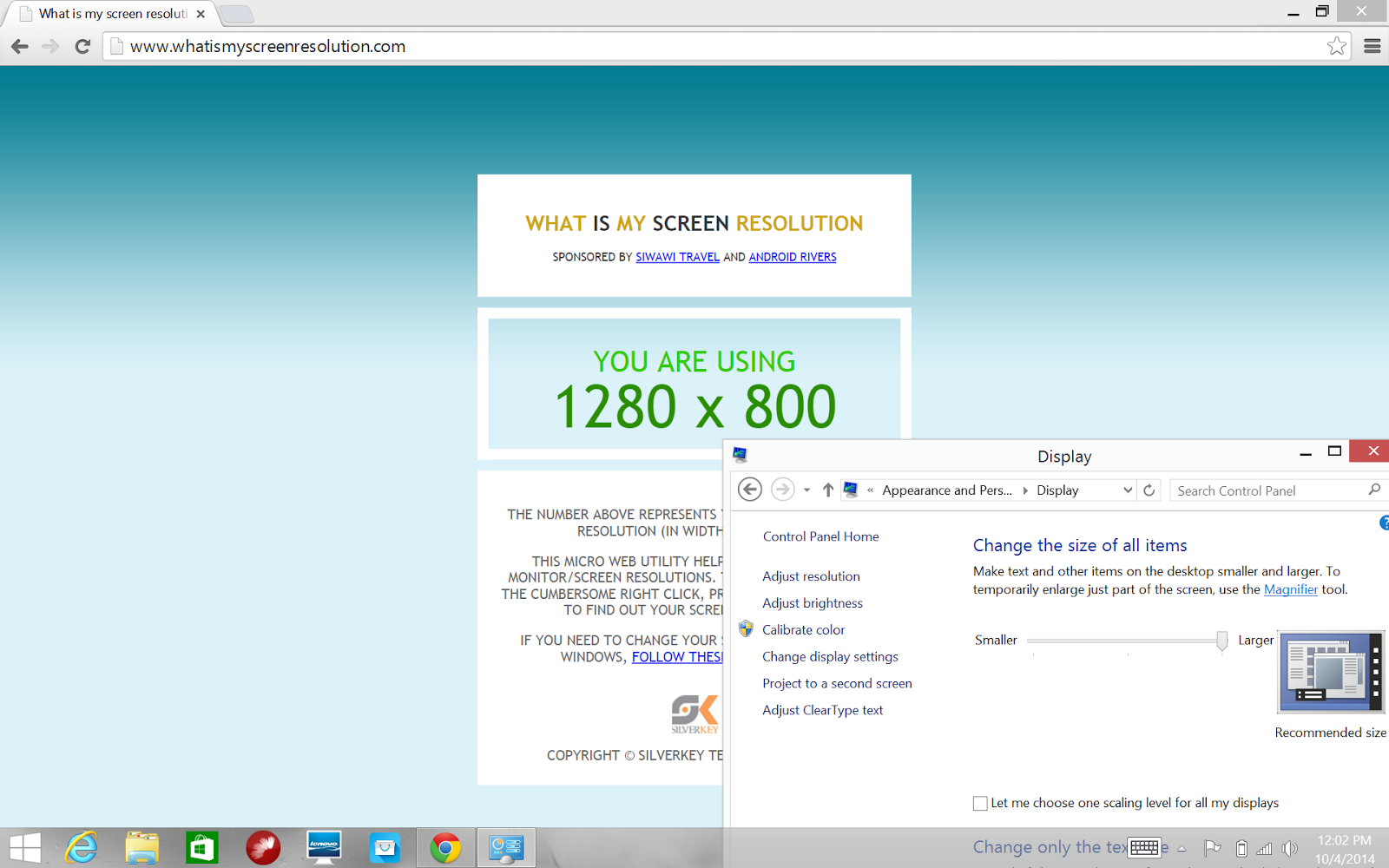 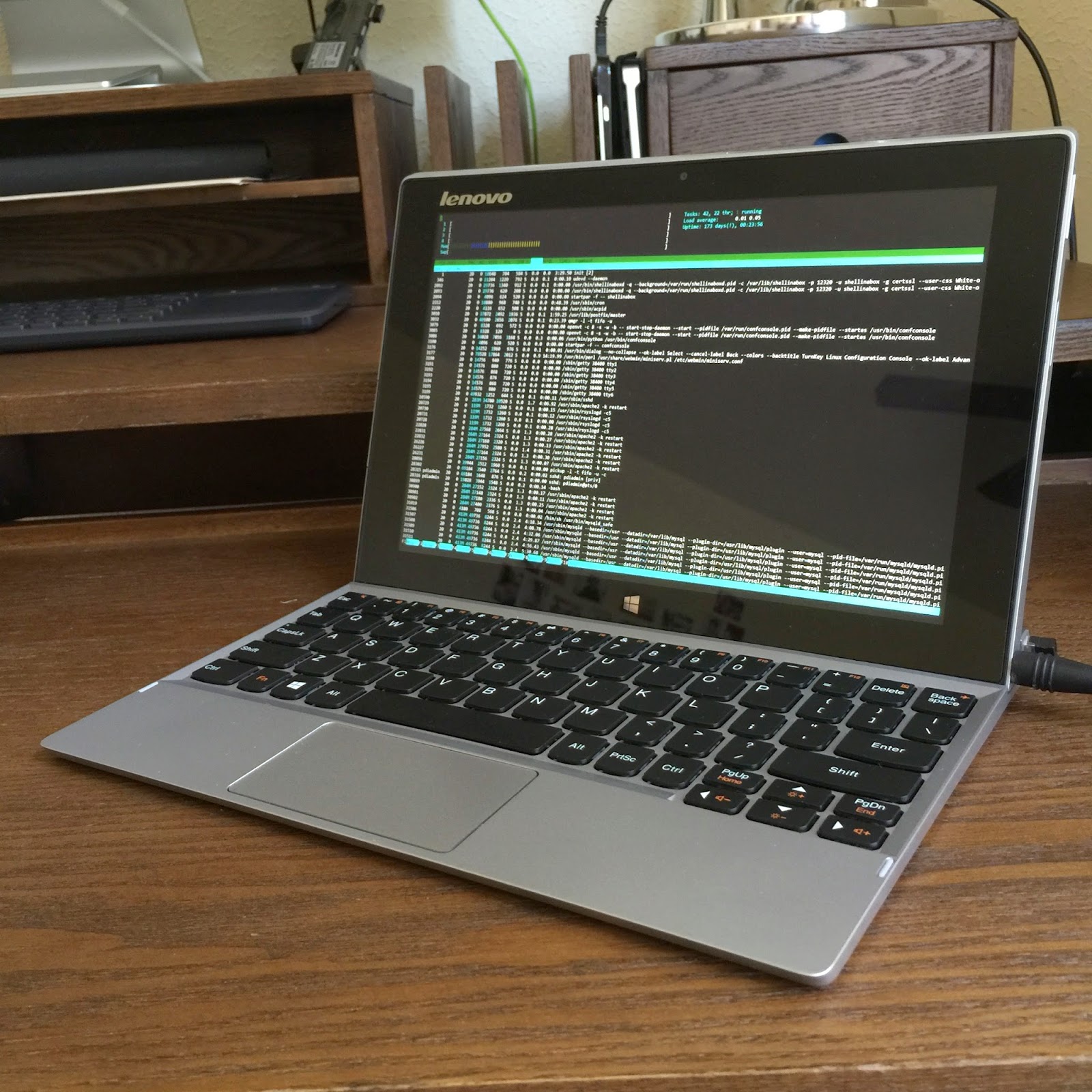 Portrait mode auto orientation is better than what I've been accustomed to in the past. The switch is pretty fast for a Windows tablet. 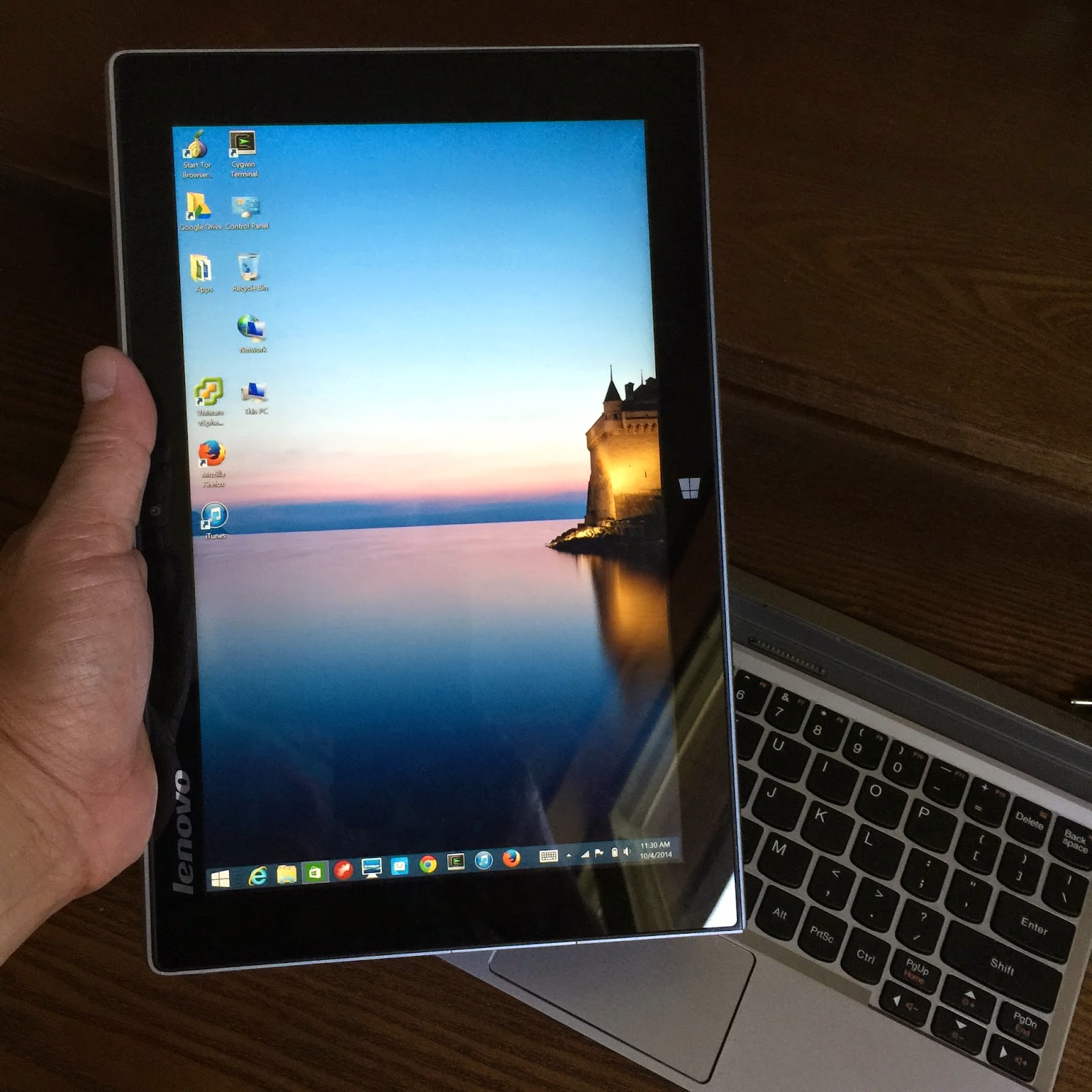 I really like this form factor. The 10" size really feels very compact and portable while being quite useable compared to an 8" Bay Trail device. 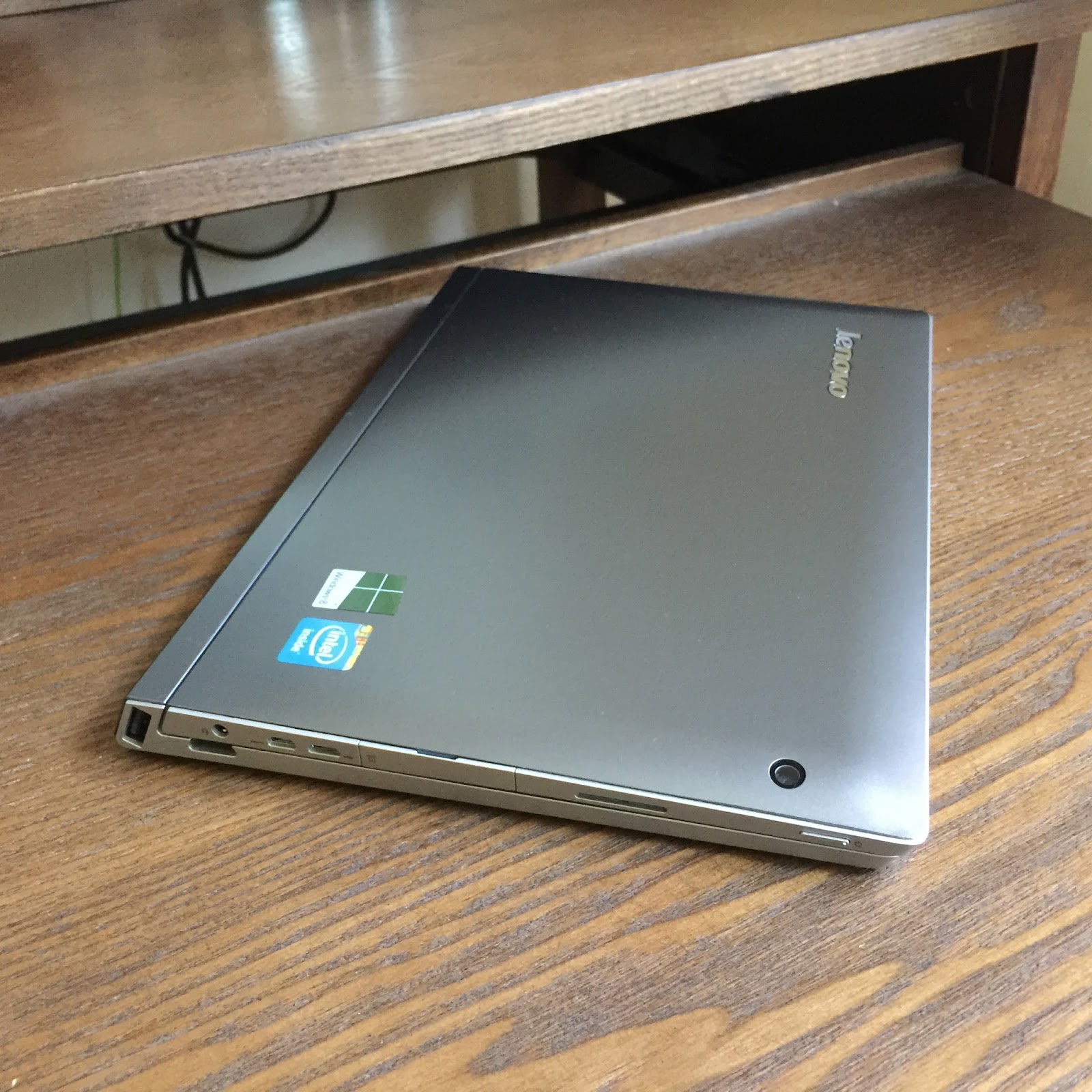 Just for comparison, here is the Lenovo Miix 2 10" on top of my Apple Macbook Pro 15" Retina. 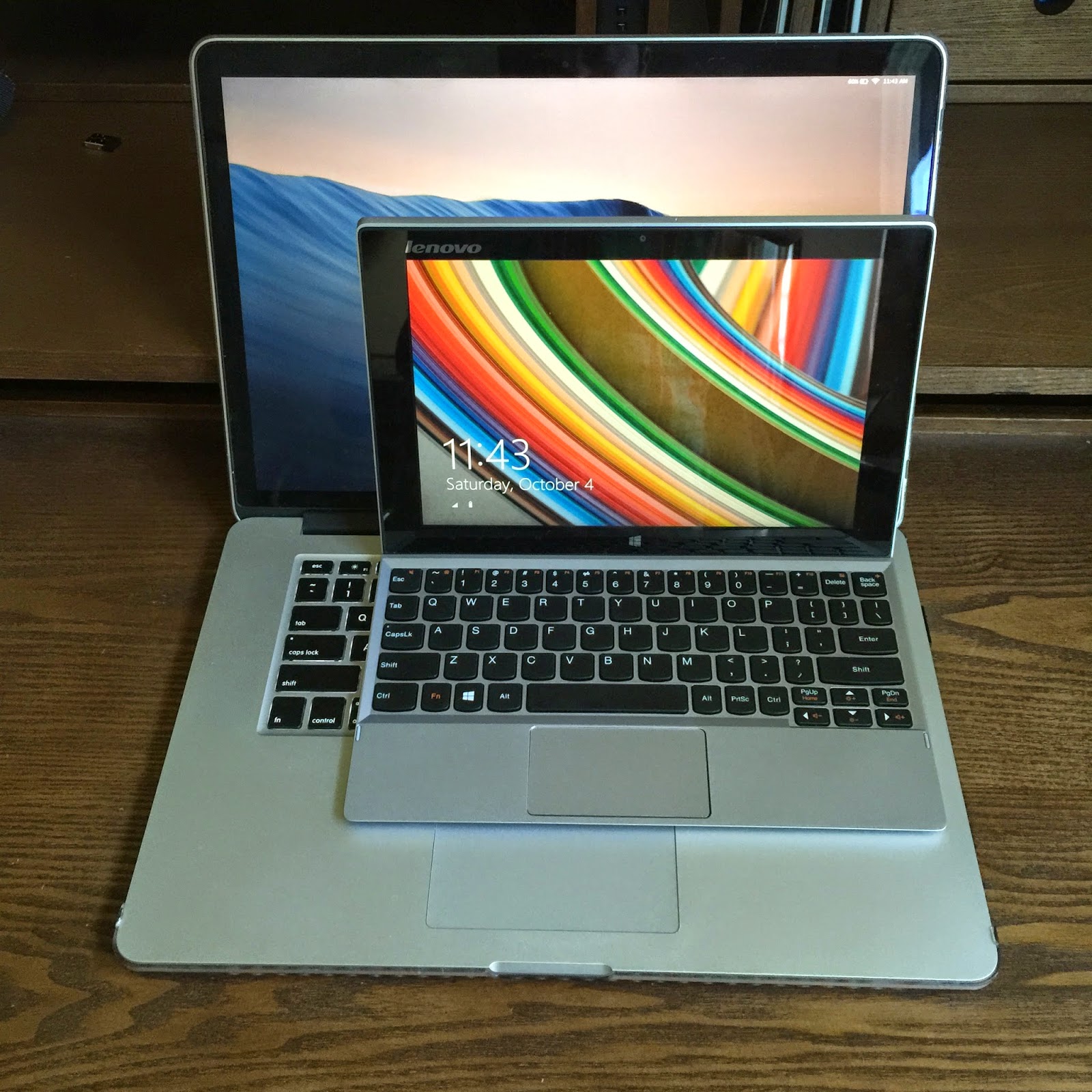 And compared to an 8" inch Bay Trail Windows 8.1 tablet. The Dell Venue 8 Pro is simply too small to be used in Desktop Mode. 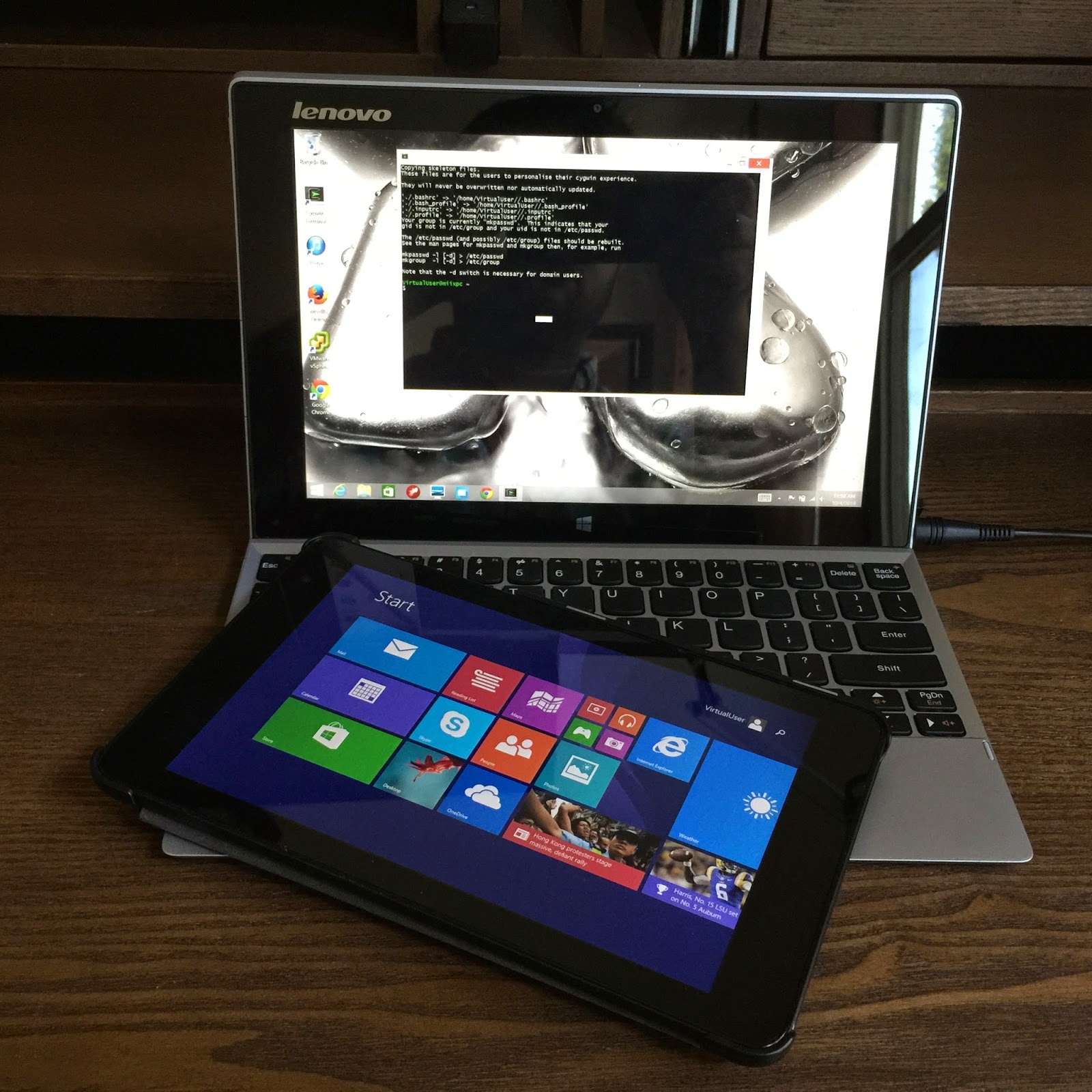 Overall, I semi-like the Miix 2. I really like the screen and battery life. The keyboard is still an issue but I can probably have suitable work-arounds. This entire blog post was written on the Miix using an external 3rd party keyboard.  I find that I really have to type slow and make forceful keypress on the supplied keyboard   2GB RAM and 64GB of internal storage is more than adequate for light tasks. It feels really snappy for surfing the web, typing up text files and accessing remote servers.

To summarize, the Lenovo Miix 2 10" is a decent Windows 8.1 tablet coupled with a flawed keyboard system.

Posted by fortysomethinggeek at 2:07 PM