What happens when you try to stripe 4 SATA 3 6G SSDs inside an E-SATA enclosure? 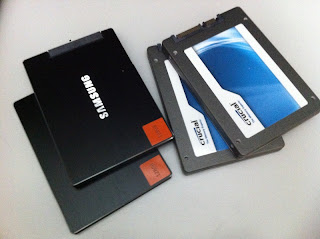 The results? Very disappointing that I didn't even bother to take screenshots. 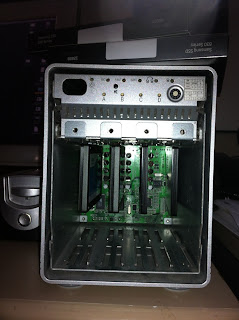 In short, don't even bother doing this at home.

The reasons are pretty obvious. E-SATA's capped bandwidth is around 200 MB/s. Then you have the fact that 99% of the consumer/prosumer raid boxes out there only support SATA 2 (3G) which barely taps the speed of SSDs. Don't expect to get speeds like the Pegasus R4 Thunderbolt which I've seen top 800MB/s with platter hard drives.

So the cheap solution is to expect someone to come out with a decent USB 3.0 Raid box with SATA 3 (6G) interfaces.

Now, for fun, I tried striping a few of the SSDs off a PC motherboard. Using a bootable Linux Mint USB, I built a striped software array in Linux with two Samsungs 830s. I was able to sustain 700MB/s through some various tests. Unfortunately, that doesn't help me because I need DAS (Direct Attached Storage) for my various computers.

Posted by fortysomethinggeek at 11:36 PM