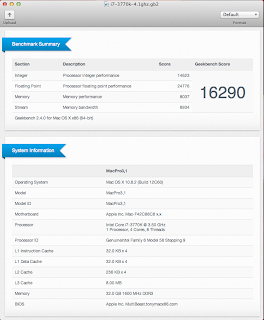 I've decided to publish the result of my 3 months with a Hackintosh.
I have a few Macs and Macbooks around the houses and wanted a really modern, beefy, home test machine I would be using for various things. This box would be used for all sort of things but the ability to run as a hackintosh was a secondary motivating consideration. I would mostly be running ESXi and Linux most of the time. I also wanted a Mac with USB 3, Thunderbolt, 32GB of RAM, lots of drive bays, and eSATA. Hence, I decided on a Gigabyte motherboard with the new Ivy Bridge i7 3770K.

Well, to my surprise, my hackintosh is extremely well built and amazingly, insanely great!

Here is the technical run-down: 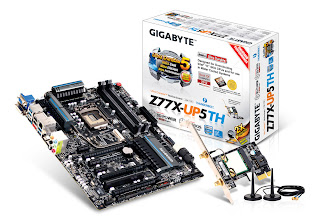 I did careful research and I will share with you my findings and all the great things about this build.

First of all, this particular build is pretty much bullet-proof.
I have full SATA III 6Gbp/s speeds, Bluetooth 3 works, Wi-Fi works with the built-in operating system, iCloud/iTunes/App Store account works, and Thunderbolt (with a small caveat). The only caveat with Thunderbolt is that devices need to be plugged in and powered on before you boot the machine. That is the only small minor issue  I have with this build. Thunderbolt/DisplayLink display works too. Lastly, there is no DSDT file to mess with it. It is 95% Vanilla OSX. I remembered I had to do something with the boot flag to get the NVIDIA drivers to install. Once installed, the GPU works with CUDA extensions and acceleration for Adobe CS applications.

All I had to do was really follow Hacks by Alfa and read some posts on tonymacx86.

Some notes on my Build. 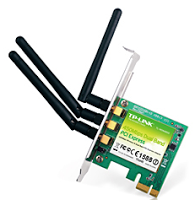 Get the TP-Link Wifi Card. Period. The ability to have the OS natively recognize the card and have air sharing and everything is awesome. Prior hackintoshes, I had to deal with 3rd party wifi drivers and silly applications to connect to Wi-Fi. I ending up junking  the free Wi-Fi card that came bundled with the Gigabyte motherboard. The TP-Link card is well worth the $30 bucks.

The Hyper 212 cooler is pretty good at keeping the 4-core, 8 thread i7 pretty cool. I never break 50c under heavy loads. I also think it is attributed to the Scout case and air-flow. There are 120mm fans everywhere. Air circulation is very good. 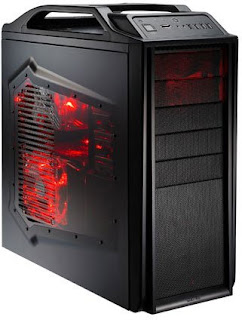 The case is an older design but it is perfect for my needs.It has 4 front USB 2.0 ports along with a front e-SATA panel on the top.

The Gigabyte motherboard has 6 or so rear USB 3.0 ports and comes with a front panel adapter for two more.

Inside the case, I have my dual Intel SSDs and 3TB Seagate drive for my onboard storage.
I also installed a Syba dual dock for quick removal of drives.It allows me to quickly swap out a 2.5 and 3.5" at the same time. 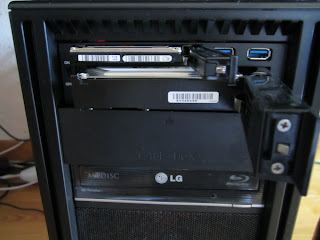 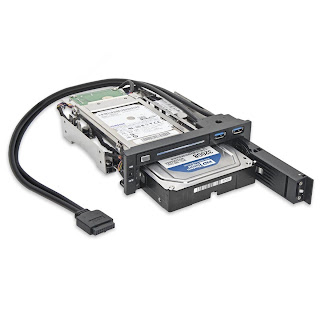 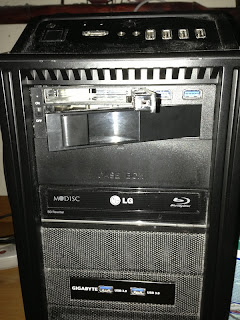 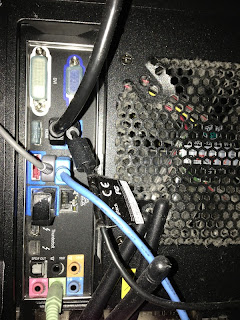 So with the rear eSATA, front eSATA,dual drive dock, I can randomly swap our 4 drives externally. I pretty much used all my SATA connectors and topped it off with an LG Blu-Ray ripper. 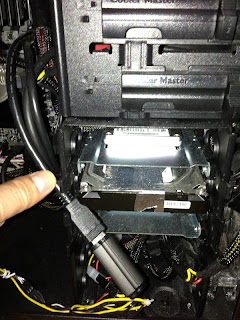 I figured since I used up all my SATA ports, I'd do the same for USB.I forget how many headers I have but I was able to fit another two USB 3.0 internal ports. I used them to store a USB wifi dongle for Linux (running dual wifi) and a bootable "safe OSX fix disk." This is my safety plan in case my OSX gets hosed, I can easily boot off the USB and fix whatever I need to. I haven't had to do anything since. Software and OS updates have worked fine. 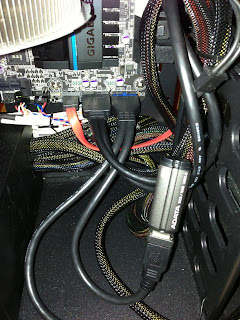 The case is pretty awesome in the fact it has handle. I never realize how cool it was and I can easily lug this box around. 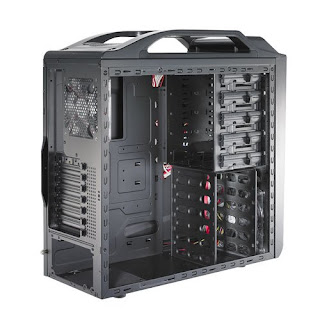 Since I had so many extra 5.25" front panel bays, I put in a front cubby case to store things. 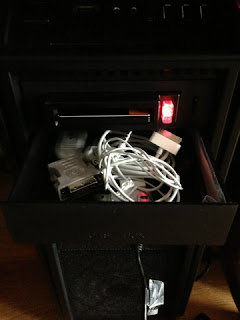 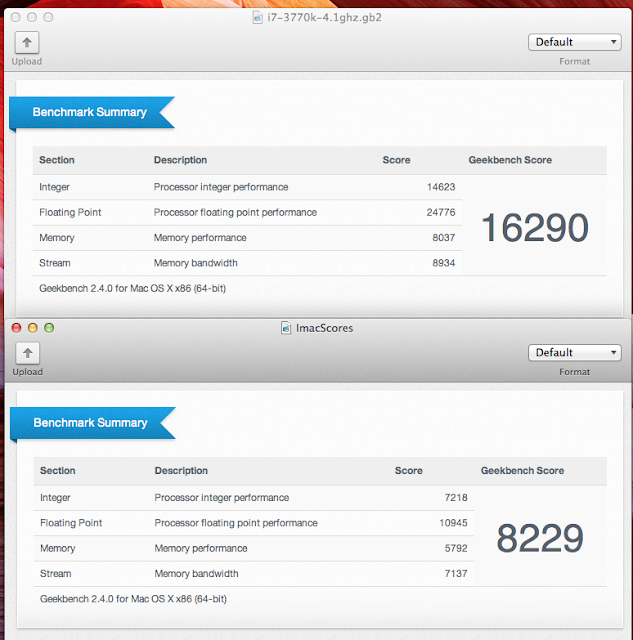 Well, it runs very fast. It is faster than my 2012 Thunderbolt 27" i5 iMac. In fact, it doubles the geekbench scores. This CPU is easily clockable. I'm getting 16,000 + geekbench easily at 4 GHZ. The iMac only scores 8229. With SATA III 6Gb/s and the Intel 330 SSDs, I am seeing 400 Megabyte/sec writes and close to 500 reads. The Nvidia GTX 650 TI isn't going to win gaming benchmarks but is more than good for me to drive large monitors. It is also accelerated for many pro apps which is nice.

The main reason to get this motherboard is the no DSTD build. However, Thunderbolt may be another reason. Like I mentioned earlier, Thunderbolt works awesome on this. Compared to my iMac and Macbook Pro, it is just as fast connecting to a Thunderbolt SSD or my Drobo 5D.
In fact, running Windows on this same machine wasn't even as pleasant. My Drobo 5D is not recognized under Windows. For displays, I have to enable the built in HD4000 Intel graphics to power a Thunderbolt/DisplayLink display.

Well, I love this box but to tell you the truth, I prefer to use my iMac. The simple truth is the 2560x1440 screen. Running two 1080p 24" Dell doesn't cut it. The hackintosh simply blows everything I currently have. I loved this hackintosh when I was testing it out in the office with 30 and 27" Cinema Displays. I think this will all change when I come up with the cash to buy me a new 27" or 30" screen for the house. I may have an eventual need to re-purpose this machine for one of my other projects I am working on. I have to admit the allure of running a fast macintosh on cheap commodity hardware is very alluring.

Will this be better than a Mac Pro? Well, yes and no. Mac Pros run full on Xeon Processor rigs with ECC (Error Correction memory modules) and you can go way higher than 32GB of RAM. ECC Ram make them by definition, superior rigs for day-to-day workflow. Xeons can come in multiple socket CPU configurations and you get up to 12 cores. My i7 is still only a consumer grade 4-core CPU.  The Xeons also come with more PCI-e lanes (I believe 40) for more dedicated cards. Hence, there is a very good reason those Macs are aptly named "Pro" machines for a reason.  However, current Mac Pros are not cheap and don't have the niceties this Ivy Bridge rig has. Namely the USB 3.0, Thunderbolt, and multiple SATA 6 Gb/s connectors. If you are a serious professional and make a living using Mac products, get a real Mac. They pay for themselves in real billable and projects.

I've thought about doing an Xeon build but that would have been way above my price range.  At that point, I would rather get a real Mac Pro. Furthermore, I haven't seen any Xeon Custo-macs with Thunderbolt and the type of I/O this machine has.

And this is where the dilemma comes in. These hackintoshes simply offer more than the Mac Minis and iMacs. This is where I believe Apple should make a mid-range "Performa" line using consumer Ivy Bridge and future Haswell architecture. Not everyone needs XEON class machines for their homes.

In the ailing days of pre-OSX Apple, I miss my original Power Computing clone Mac. I remember getting a few StarMax and Power Computing "Mac clones" that offered great expandability and affordability. Those too were insanely great machines. Anyone remembered this guy? This is what the world needs now. Cheap affordable OSX based computers. 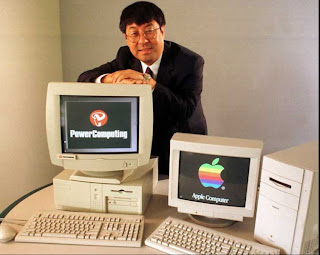 Posted by fortysomethinggeek at 9:15 AM