If you've been reading my blog, you will know by now that I am a big fan of the PogoPlug. For $15-20, you can get yourself a hackable NAS. I've basically re-purpose these little ARM computers to run ArchLinux; providing a variety of network services from proxy, file, rsync, to full LAMP web application servers. They're amazing devices at $15. With an ArchLinux USB stick, I can pretty much do a lot of cool things and replace slow and aging Intel servers. 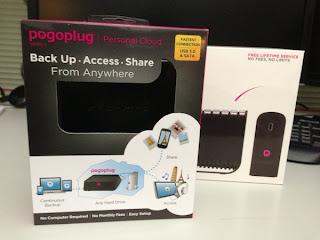 Well today, I am going to give you my impressions of the newer, PogoPlug Series 4 (v4) running the non-stock firmware, ArchLinux. You can't quite get them on the electronic bargain bin of $15 quite yet. They go for $60-90 and I was able to snag one when my discount notification announced it was $40 shipped.

First of all, the older E02 model is still a better unit for most purposes. It has a faster processor and more  RAM. E02 sports a 1.2 GHZ Kirkwood CPU with 256MB RAM. The Series 4 comes with an 800 MHZ processor and 128 MB of RAM. I would say the new Series 4 is similar to the Pink B02.

Now what makes the new Series 4 unique is the USM SATA dock and USB 3.0 support. This is why I got the device. I have a bunch of USM and 2.5" drives I want to use. Furthermore, I could not get more than 20-30 MB/sec read and writes through the network with an existing USB 2.0 attached PogoPlug. I figure, I'd take the risk and see if the newer V4 justified the premium. 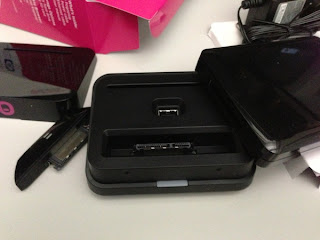 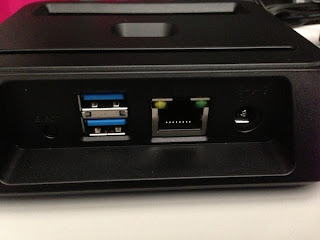 For hacking and re-purposing purposes, the Series 4 is close to the Mele A1000 Android Mini PC TV device. 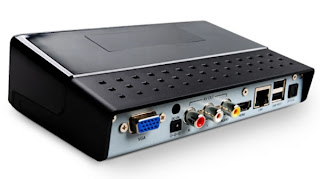 The Mele A1000 made a big impression because you can hack it to run Linux. It also has a USM Sata dock on the top and unlike the PogoPlug V4, it has video output via component, VGA, and HDMI. It can be made into a desktop workstation. I declined to go that route for three reasons. The Ethernet on the Mele is not gigabit and it has serious performance issues with the GPU under Linux. Since I use my Pogos as headless servers, the Mele A1000 was not even a consideration. Last and most importantly, the ArchLinux community is much more entrenched with the Pogo devices.

The box has a nice small form factor. I totally dig the size difference compared to the older Pogos (pictured to the left). The top comes off to reveal the USB 2 and SATA port. For ArchLinux, only these two ports will be bootable. Apparently, the SATA connector has port multiplication. In theory, this means you can connect the PogoPlug Series 4 to an external 4,5,8 Bay eSATA RAID enclosure that requires port multiplication. I did not test this feature. 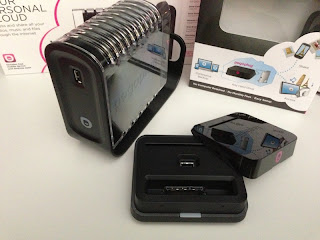 I tried the PogoPlug Series 4 with a brand new 1TB Seagate Backup Plus USM drive. I also attached a 1TB USB 3.0 Western Digital Passport drive. In addition, I tried the SATA connector with a bare SSD and 7200 rpm Seagate XT Momentus hybrid drive. The only problem I have with the USM dock is that it is not wide enough to fit the older Seagete Go-Flex (pre-USM) drives. The newer USM classified Seagate Backup Plus drives fit perfectly fine. 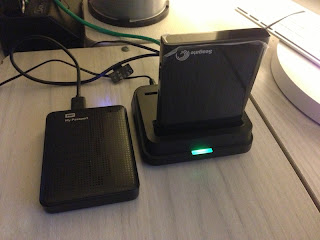 As you know by now, my posts about Pogos usually involves them being hacked to run ArchLinux. I do not run them stock and these blog posts are tailored for those interested in them running Arch.

In my testing, the V4 provided mixed results. I formatted all my drives Linux  EXT3 for the best results. All the drives were empty and freshly formatted at the time of this testing.

The USB 3.0 did surprisingly OK. In some results, it was better than using the USM docked Seagate.

The SATA connection was a letdown. I thought it would produce better results. The first results is typical of people who plan to use it with a USM device. The results may be attributed to the fact the Seagate portable 2.5" backup plus drive spins at 5400 rpm.

I then proceeded to test with a brand new 7200 rpm, SATA III 6Gb/s Seagate XT Momentus hybrid drive with a 8MB SSD cache. I have this particular drive as data drives on my laptops. On both my Mac and Thinkpad running Linux with EXT3, this drive consistently breaks the 100 MB/sec barrier when connected to a SATA III channel. 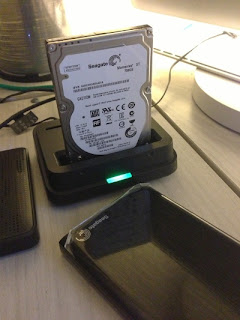 There wasn't much of an improvement.

I went one step further and tested with a Samsung 830 SSD. Again, my suspicions were correct, the SATA channel is probably running at SATA I speeds.

Still, I was disappointed I couldn't get better speeds. I was hoping for at least 80 MB/sec.

Now, the speed I/O isn't a big issue if network access was good. After repeated tries, I could not get the  V4 to perform better than the older E02. The previous E02 could easily hit Gigabit's limits. No matter how much tweaking I could do to the V4, I could not get more than 70 MB/sec network throughput.

Samba performed poorly to my surprise. The first two screenshots below are the V4 with a USM drive and an SSD connected to the SATA port. Connecting to the USB 3.0 port provided similar results. 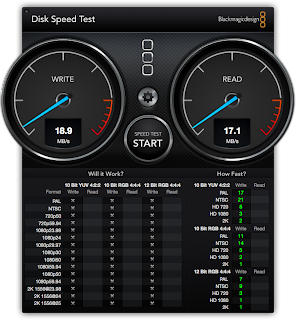 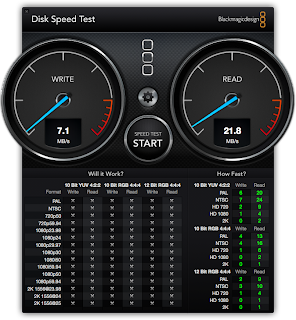 Now compare it to the older E02. The older E02 has a USB 2.0 connected external drive and it performed consistently better. 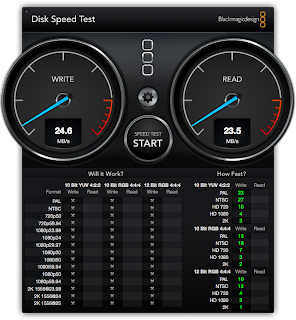 This translated in the real world with real copies. Even with the SATA drive advantage, copies were much slower.

In the end, it did not matter that the newer model has SATA, sd card slot nor USB 3.0. It simply perform slower than the previous E02 Classic Pogoplugs running as a server. In some use cases, running directly off the SATA and running applications like MySQL, you'll benefit from the faster local reads on the newer v4. However, the majority of people will be using the Pogoplugs with network file access. As a SAMBA file serving NAS, the E02 is still a better buy. It really boils down the hardware. The Classic E02 has a faster processor and more RAM. That is why it performs better.

There is one saving grace, the V4 is a good looking piece of kit. You don't have dangling wires everywhere when you use only the USM SATA dock. 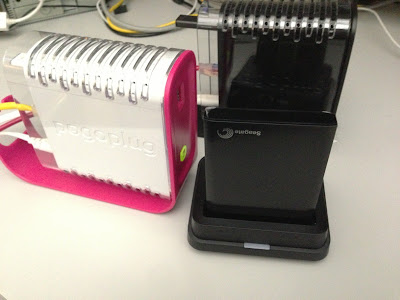 Posted by fortysomethinggeek at 9:56 AM