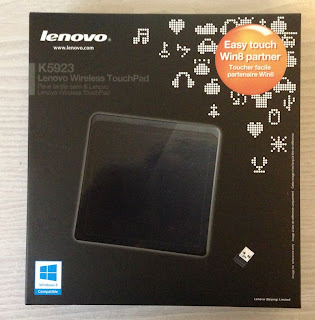 I'll preface and tell you right now, I like my Apple Magic Touchpad. In fact, I love the glass trackpads on the Macbooks. They're the only input devices that I choose over the original IBM track point or even the Microsoft ergonomic trackball. I could use nothing but those glass trackpad.

So when I saw a Lenovo multi-gestured touchpad, I decided I had to have one for my Thinkpad. Boy was I completely wrong. So here is my scathing review to save you the time and money from buying this thing. First of all, it is matte satin black which is cool with me. It matches the Darth Vader, murdered out black Thinkpad. However, the build quality is crap. It feels flimsy.  Even though my Thinkpad is made by the same company, this trackpad is nowhere up to "Thinkpad" build quality you expect from Lenovo. 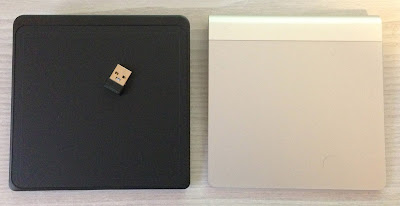 It is definitely no where as nice as the Apple Magic aluminum finished glass trackpad. It is like comparing a Jaguar to a Kia. Side by side, you can tell which is a premium device and what is cheap.
Now, I know where and how auto journalists complain about fit-n-finish regarding plastic materials when they review cars. This has the same cheap kind of plastic you find in a Hertz rental car's dashboard.

Fit and finish is pretty important considering you will be actually touching this thing on a day-to-day basis.

Dongle. I hate dongles. Why can't manufactures stick with bluetooth. Logitech uses dongles too but at least you can tuck and hide the dongle inside their mouses/trackpads/keyboards when not in use. I'm pretty certain I will lose that dongle someday.

Boy was I confused. Nothing was working for me. I kept on muting my volume by accident.
I googled and googled for drivers or some sort of way to set gestures. Nothing was working for me.
So I decided to read the manual. This is the first device in years that I ever had to open up the user's manual. New DSLR camera? RAID? Switch. Nope. I never read the manual for any of those devices. This one, I had to pull out the manual to figure out it had no drivers or control settings under Window's control panel. The front box advertised it was Windows 8 out of the box and you would figure there would be some sort of control-panel setting to illustrate the type of gestures it supports.
In this regards, windows is pretty lame not to have it in the control panel. Hit the search bar and type in "gestures, mult-gesture,trackpad" and none of the help files come up. I can easily see how normal consumers would get flustered with this.

One other problem. My OS of choice is Ubuntu/Mint on my Thinkpad and OSX on my Macs. This touchpad works as a dumb mouse in Mac OSX. So forget about using it with a Macintosh running 10.8 Mountain Lion.
Only Ubuntu supports 2 finger zoom gestures and scrolling. I downloaded some 3rd party, open source stuff like Ginn,utouch, synclient, and Touch-Egg. Still no real progress. In fact, I was getting carpal tunnel. There was so much lag and un-responsiveness, my hands started to hurt. I stopped wasting my time to get this thing to work with Linux and decided to ONLY use this under Windows 8.

I understood I bought a Windows 8 device.  OK, that is fine with me. I'll give up using this device under Linux for the time being. 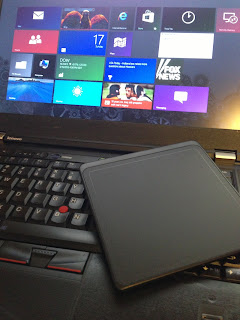 Once in Windows 8, it was no different. The gestures still lagged. Movement and actions stuttered. The zooms was no where as smooth as I am used to on my Macs. There were lots of accidental presses and I either logged myself or changed my volumes/mute. It was very frustrating to use as I would always reach out to use another mouse or my laptop's internal trackpad.

The only real things I could do in Windows 8 did not impress me. I could swipe tiles, get into desktop, etc. But where is the real stuff like rotating images? Using Bing's maps, the zoom was horrific. I had to fix the accidental scrolls with another mouse.

Most of the gestures are either swipes (multi-fingers). There are no 3,4 finger pinch. There are no differentiation from using an index finger or thumb. How dumb is that!
Page forward? App reveal? Volume? Lock Screen? Page Up and Down? I could already do this with my keyboard! What about switching workspace? Or better yet, switching between open programs?


Edge swipes to pull up the charms bar? For real? Is this what multi-gesture means in Windows? And the gestures were inconsistent. Some apps complied with the page forward/reverse and some didn't. I speaking mostly of browsers here. Even the built in apps had poor gestures. Image Viewer in Windows doesn't navigate across thumbnails an no ability to rotate an image.

Maybe the Logitech trackpad will fare better. So far, my impressions of multi-gesturing trackpads under Windows or even Linux is not so good.

Now back to the manual. Compare this. 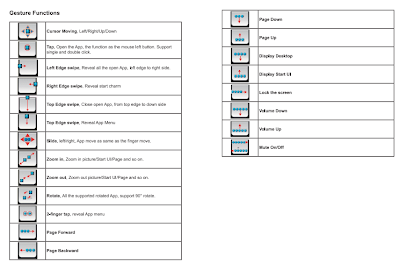 To this on OSX. This is how you learn to use gestures. The system preference has video examples of all the cool tricks you can do. 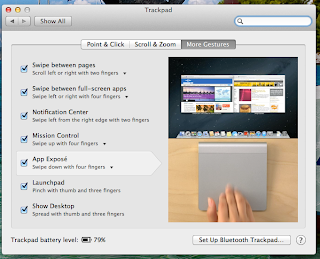 Compared to the Magic Trackpad.

Simply, there is no comparison. Everything works pretty fantastical out of the box with the Magic Trackpad under OSX. The gestures are so smooth and damn intuitive. They change your way of using a computer. The Lenovo trackpad just gives me carpal tunnel.

Here is my conclusion: Do not even waste $20 on this. I'm going to try and tweak Ubuntu a bit more to get gestures. At least Chrome, Gimp, and LibreOffice allows me to zoom.

So this is what I've ended up using with this trackpad. My trusty Microsoft trackball for everything and trackpad for zooming. I didn't feel like throwing it away, so I'll try to keep it around and see if I end up liking it later on. 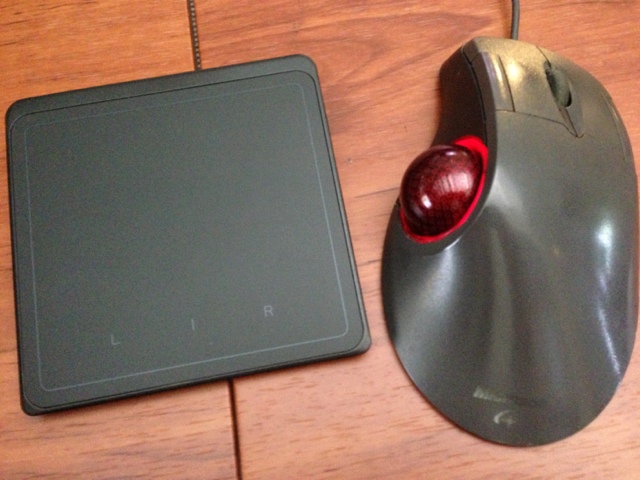 Posted by fortysomethinggeek at 8:21 PM