Elementary OS recently released their Luna Beta 1. It is one of the new and controversial Linux distro due to it's mac-like aspirations. 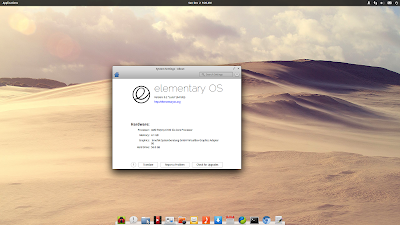 Here is my take and short review.

My background: I use OSX and Linux extensively. I run a variety of CentOS/RedHat servers and I use Ubuntu 12.04/Linux Mint 13 over a dozen different workstations including a Thinkpad I tote along with my Macbook. I normally don't like using Ubuntu off-shoots and derivatives (except Linux Mint) but I've been tracking eOS (Elementary OS) for a while due to the cohesive design philosophies. On Ubuntu/Mint,  I usually run Cinnamon on multi-monitors setups or Windowmaker on single monitor PCs. Unity looks horrid on two large monitors (30 in and 27).  I pretty much hate Unity so you now know my bias. Hence, I have settled with Cinnamon Desktop. I am pretty much happy with 12.04 (running Cinammon) or Linux Mint 13 so I don't have a burning desire to test out new distros.

So why did I install eOS? As a Mac user, I like the idea of a well design UI with consistency. After all, I run WindowMaker in Linux because it works for me. I like polish and eOS promises to be those things. Visually, it is the slickest looking distro on Linux. There are only a few apps I need to run on Linux and I'd like a desktop environment that is fast and free of clutter. eOS is also a fresh take.

Furthermore, eOS is based of Ubuntu so you can easily install Debian apt packages the same as you do on Ubuntu.

Now for my review:

Overall, the distro is very rough around the edges.

I first tested it via VirtualBox and liked it enough to try on a dedicated full SSD drive install.

And then the problems arose. First of all, I could not get dual spanning monitors to work on a dual 23" Dell setup. The same machines run Linux Mint and Ubuntu just fine. I tried the normal and proprietary drivers. I don't have the patience to modify .xorg files to get it working. 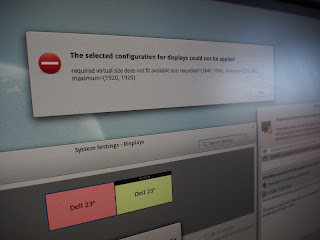 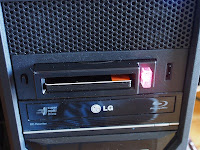 Secondly, my build (originally done on a AM3+ FX AMD board) would not boot on an Ivy Bridget i7 rig.

I normally install an OS on a single SSD and try to run them on different machines via front panel docking into the internal SATA buses. It simply would not boot on my new Gigabyte Z77 Thunderbolt motherboard with a Nvidia Kepler GPU. I'm certain I could have fix it but I didn't want to go through the hassle. I wasn't ready to do another new install on the i7 rig. I've been having bad luck with new OSes deleting bootloaders off my other drive on same machine. 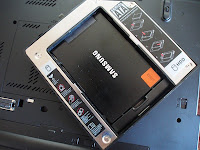 However, I was able to boot the same build on a Thinkpad T420. It ran just fine on my Thinkpad.

Take note, I firmly believe in the notion of one disk build running off multiple machines. I've been doing this for over a decade on macs and this is something that needs to work on other platforms. I like the idea of taking one SSD and shuttling it from work, client location, to home with all my apps, servers, SSH keys all one one drive.

Performance wise, I could not tell the difference running natively with 32GB of RAM & SSD versus running it with 4GB inside VirtualBox off a standard hard drive. UI responsiveness was the same running natively or virtualized. This is a good thing because it will be fairly responsive on mid-range machines. I'm running some IDE and Java apps so nothing fairly intensive. Windows, scrolling, and opening apps was fairly fluid. I couldn't tell you how fast it ran on my i7 3770K rig because I couldn't get it to boot but I think it will be fairly fast.

Now for the quirks. I accept the fact eOS has little customization and I get that. There is no need to add or modify themes if the built in ones work. And they do for the most part. I wouldn't change much in the UI of eOS. Unfortunately there are some customizations I need to have working. There are apps that I run that don't have Debian apt equivalents so they don't install into your normal Ubuntu App menus. This is fine in Ubuntu because you can manually add them and if you use a OSX like clone Dock like Cairo, you have the option of locking apps to the dock. You can't seem to do that with non-apt install apps on eOS Plank (their name for their dock). For example, I run Sublime 2 and various WINE Windows apps that I like to be permanently affix as a launcher in my dock. Plank is based off Docky so I can probably customize it via a hidden ~/.config/*.dockitem  text file but I don't want and need to go through that hassle. It should just work.

Some of the built in apps aren't quite there yet. The calendar app doesn't have CalDAV support. I couldn't figure out how to add additional new mail accounts in their Geary Mail client. You can't quite theme (solarize) your terminal which I understand because of their UI mindset. Overall, this is definitely a beta release and I can accept those limitations. As with Linux, if there is something you don't like, you can easily replace it. I quickly replaced their text editor, Scratch, with a customized themed gedit to my liking.

If you used Mac OSX for some time, you can't help but notice the glaring similarities in philosophies. Would I call it a rip-off? No but the similarities are uncanny. Most notably, the Window Manager borrows quite a bit from Expose/Spaces.

Here is Window workspace switching. You can even configure similar hot-corners. Also, what they call  "Exposed windows"  works very similar on the Mac's version of Expose. Except, you can do both switching and tasking windows at the same time on OSX. 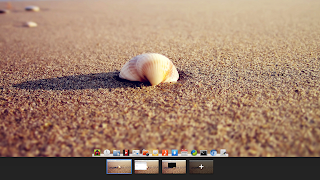 Minor quibble, you have no visual feedback when you create a new workspace. Did it work or didnt? 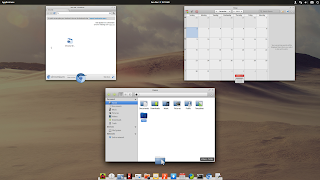 And on a Mac below. An extremely powerful and thought out concept. 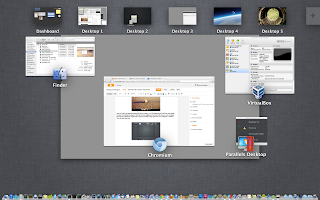 Instead of showing workspaces below, OSX shows it on top with a floating modal for the current desktop. As for exposing windows, it is done at the same time in one swoop.
The OSX implementation is more intuitive and advance in the fact you can re-arrange the order of workspaces (Apple calls it spaces) and drag-n-drop apps from one workspace to another. As you can see above, I drag the calculator app from my current workspace into Desktop 2 (cursor not shown in screenshot). Also, OSX has the ability to have different wallpaper/color backgrounds in different spaces which is handy. Different backgrounds comes in real handy when you are re-arranging the order of virtual spaces. The key strength of OSX is also multi-gesturing instead of using hot corners or keyboard shortcuts.  The whole experience of switching and tasking is incredibly fluid on OSX. Multi-touch gestures isn't quite there in Linux yet.

This small comparison isn't mean to be a critique on eOS part. I like their direction but if you plan to lift some ideas from someone, you should go full tilt and improvise on what made the original so good.

There are other Mac-like nuggets like the Mail client and even the system preference seem OSX-like to me. I wont go into details but you can definitely find those screenshots online.

The App Launcher is a modal floating panel in the left mid corner. It is different and I don't have much to say about it. It does the job and it is something different to acclimate yourself to. 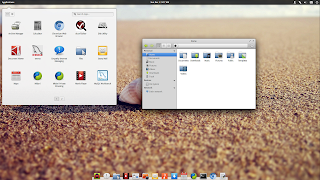 Like I mentioned earlier, I could not get dual spanning monitors to work on real hardware but I was able to test out spanning display in Virtualbox and there were some issues. Apps would snap into their respective workspace if you tried to move them across monitors. Screenshot below shows what happens when I tried to move my mail client across.

Minimize wouldn't minimize but move over to the other monitor. There were other issues but I wont bore you with a dozen screenshots regarding spanning display. Surely, these are pre-production bugs.

Overall, I like it but I think I'll wait for the final release to make a final judgement. It definitely looks very slick and performs very fast but there are little things that annoy me right now. Here are a few: To make a new folder in the File Manager requires a contextual right click. I prefer a toolbar button for this and other functions.

There is no minimize window button (you can add an invisible one from reading a few blog posts). There is simply fullscreen and close.

To minimize, you click on the icon on the dock and it makes it feel as if the OS was designed for single app full screen use. I say this because if you have multiple browser windows or text files, one click of the docked app will minimize all of them. Then there is fact that you don't have multiple docked previews of your browser windows in the dock corroborates with the idea of the Single App UI. It feels like they want to make it too clean and simplified.

Lastly, I like to use the mail client but how do I add another account? I don't feel like googling for answers for something so simple and you shouldn't have to in this day and age. It needs to be that intuitive.

Posted by fortysomethinggeek at 10:15 AM