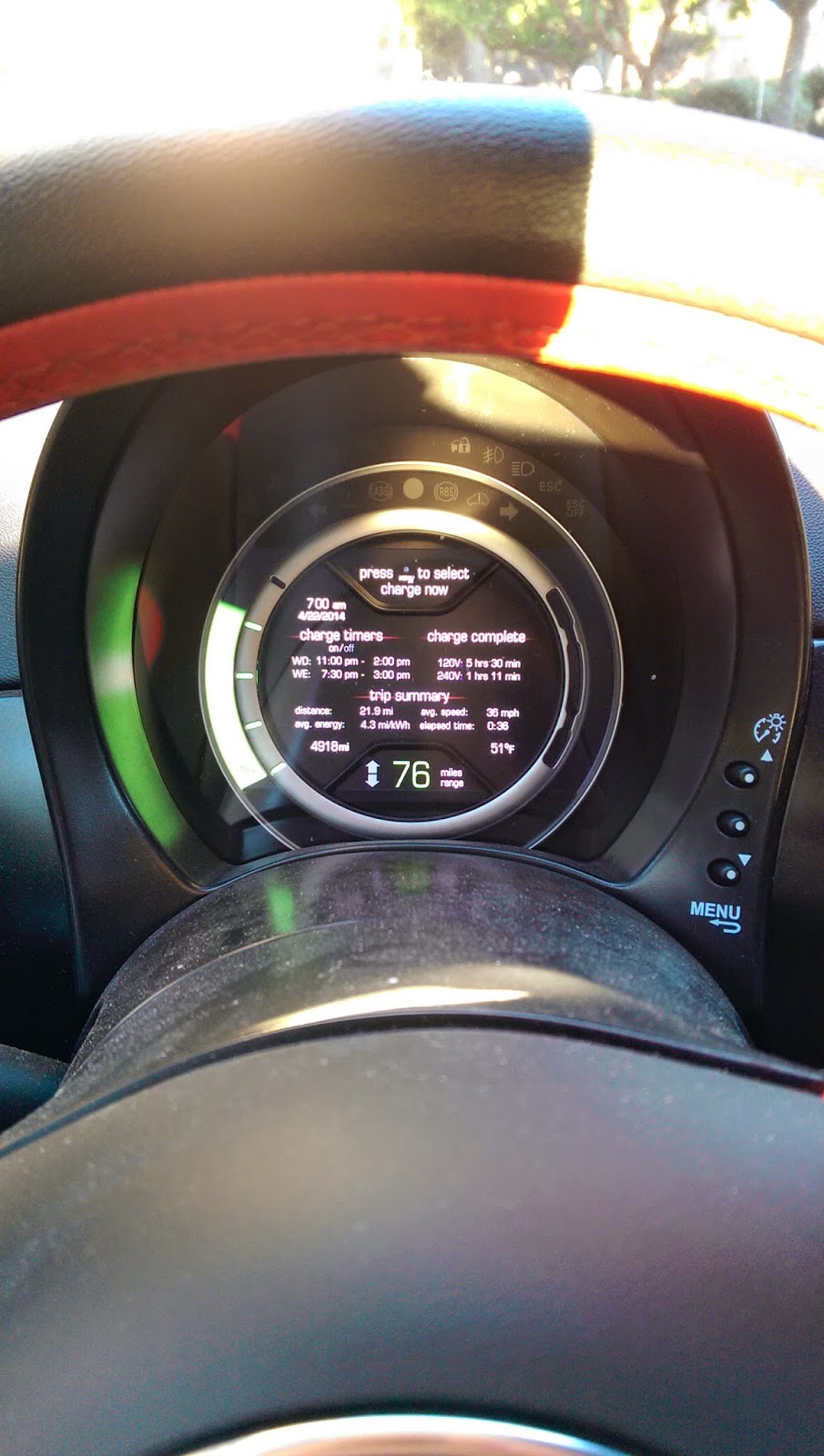 So what do I have to report?

I still like this car so far. No rattles or major problems. I'm still loving the HOV carpool lane access. In fact, I'm still raving about it. I definitely save over 1 1/2 hours a day round-trip. My sanity and stress levels have been reduced. Not all is rosy. I've gotten the middle finger a few times and I've gotten people yell at me from the other lanes; professing, I can't be in the carpool lane.
Once I point my finger to the side of my car and toward the direction of my HOV stickers, I can see genuine remorseful embarrassment from the on-lookers. People need to be educated  on the subject of electric car benefits as well as carpool etiquette.

Styling wise, I think the lack of awareness is due to the  fact it looks like the normal Fiat 500. There is really nothing "in-your-face" to scream that it is electric. Everyone I know is surprised by that fact. I think if I had some big "zero emission" or "electric" car decal, I wouldn't be harassed that much in the carpool lane. Then again, this car does come in those bright orange with white bumper color schemes that is tailored to attract attention. I think my Black on Black Fiat is pretty low key.

Those HOV stickers are definitely a big draw. Once I tell people about them, they instantly get hooked. I know four other people now with electric/plugin cars. The green sticker availability has pretty much exhausted. There are only 40,000 green stickers and they're pretty much all accounted for. White stickers, which goes with the  Fiat, are still available indefinitely until 2019. The difference between the two stickers (green vs white HOV stickers) is that green are for plugin cars and white are for 100% zero emission vehicles. 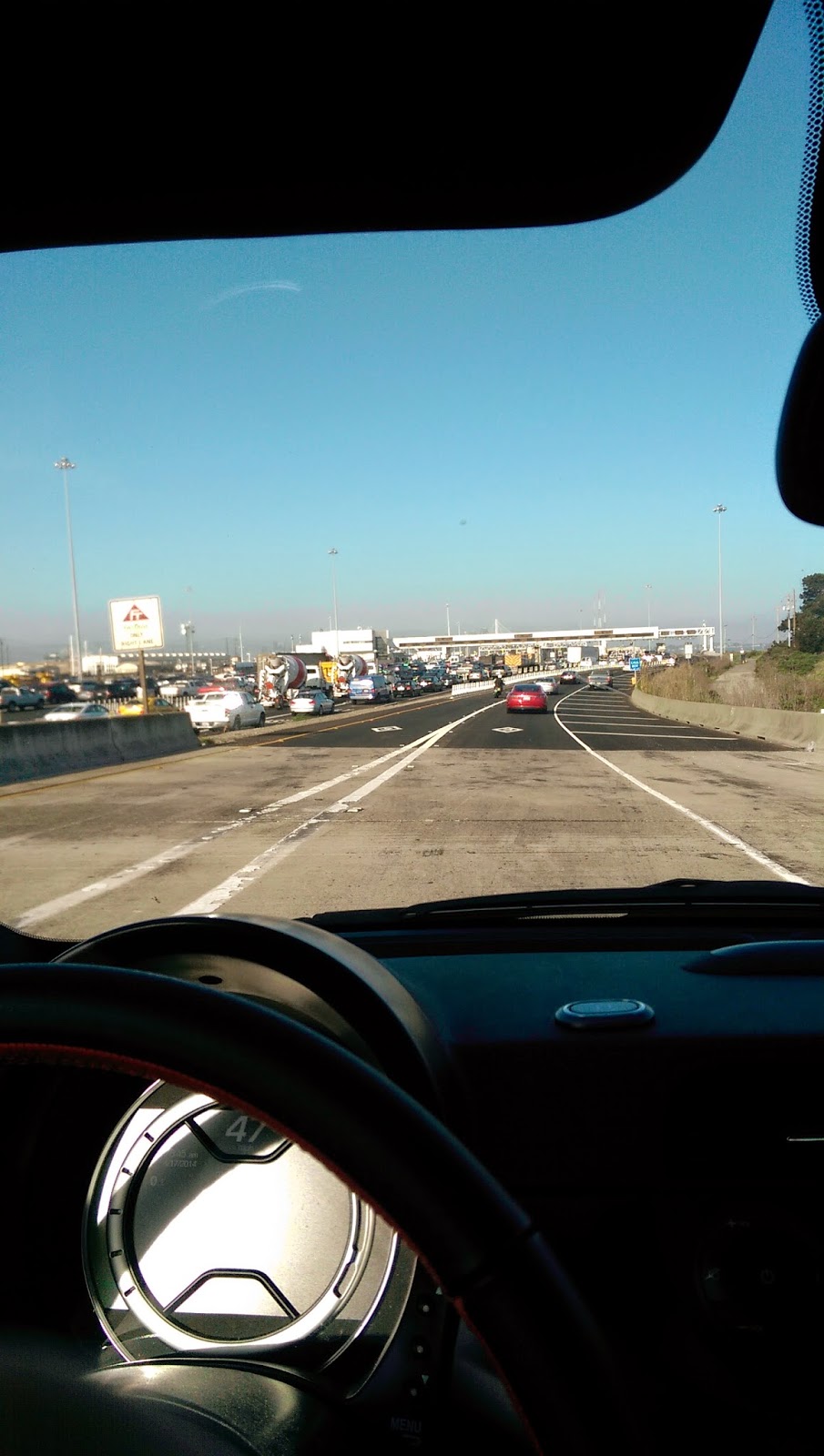 The other benefit to the white stickers is the fact, it is the only one that can go on the carpool lane of the Bay Bridge. The picture above makes me smile every morning; zooming across all the cars crawling to a snails's pace at the metering lights.

Another benefit of drving an electric car is the $2,500 that the State of California gives in the form of a rebate. The check took oer 60 days to process but I did get it.
Forewarn, the rebate is taxable as my wife got a 1099 for last year's rebate on her car. At this point, I'm basically driving the car for free.

Warmer weather means better range. When I got my car in late November, I was seeing ranges of 88 miles. That is the advertised range. I pretty much operated within spec.

However as the weather has gotten better, my range has increased considerably. I normally come out to a car with 110 range every morning. After a 50 mile round-trip, I normally have 55-60 miles left.
My average miles/kWH is 4.1-4.2. Depending on the time of day and traffic, I can squeeze out more. If I go out later in the day where there is more traffic, I can hit 4.6 miles per kWH. 4.5-4.7 m/kWH entails moderate traffic with carpool congestion averaging 45 mph. After driving 22 miles, it is mind boggling to see a range indicator of 81-85 miles left. 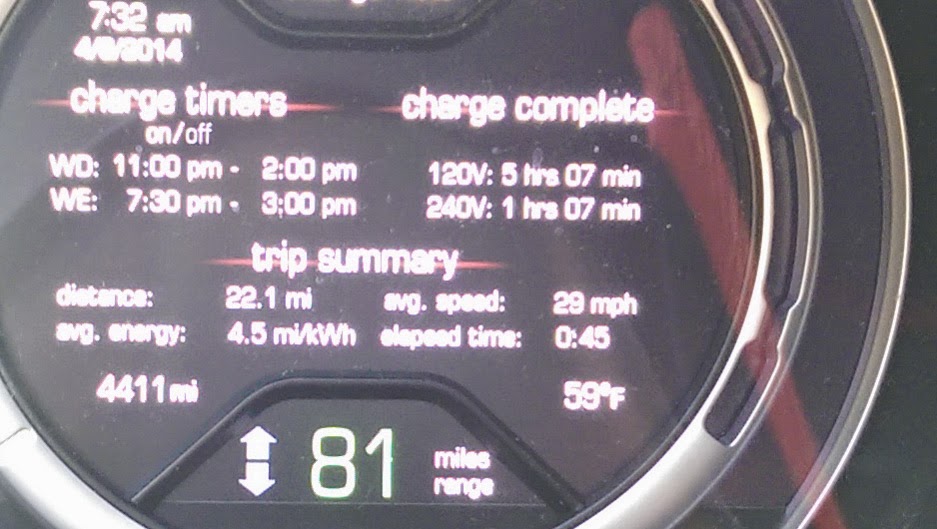 Under normal traffic where the carpool flow is going 65-70 MPH, I would say my average is 4.2 miles /kWH with a range of 95 miles. Thus, my conclusion is, driving a little slower with more braking will dramatically increase range. This is a city car. I've also experimented withe "pulse and glide" technique which helps with range.As I throttle up the car to get momentum, I gently let go of th gas to regenerate. Thus, I am constantly "pumping" the throttle to reach momentum and the car glides to recapture some of that energy.

I've only had two instances where the car didn't charge. The first, I forgot to plug it in and the second may be due to an improper connection. I don't think I fully inserted the cable. Those were the only two instances where I had any problems. Luckily, I only needed an hour and a half to charge to get where I needed to go. For the past 5 months, I have not driven my gas car. I firmly believe now that my future garage will always have one electric in the stable. That is a certainty. I've already made the infrastructure investment (240v home charging). 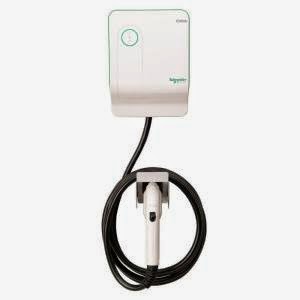 The EVSE unit I am using is the Schneider EVlink 30. It happend to be the cheapest one ($500 on sale) with the most positive end-user reviews. The unit has been pretty much flawless. My only issue is the length of the 18 foot J1772 cable. That was a major over-sight on my part as I was looking for the best deal. If I had to do it over, I would get one with at least a 25 foot cable. Right now, I have to back in to charge my car.

I no longer charge at public stations. After doing the math, it is much cheaper to charge at home. I'm never stuck nor need the assistance of a public charging station to get where I need to. Thus, I don't need it. With stations now charging $0.49 per kWh, it isn't worth it.

My only real gripe with the car is the rear passenger access.
I have two small children and the rear facing seat is pretty tough to get into. Front facing is tight but doable. However, with rear facing child seats, nobody can sit in the front and it is very difficult to get my little girl back there. The front seat doesn't fold far enough nor have enough space to get a rear facing child seat in. Thus, this corroborates why I don't think this can be my only car. Fortunately, I rarely drive my infant.

The other issues that may bother some people are the ICE unit. There is no bluetooth audio streaming which may bother some smartphone owners. For me, I use iOS devices for my music playback so I'm not complaining. I simply plug in the USB and have full head-unit steering wheel controls of my 20,000 iTunes match library.  No issues there. However, with my wife's car, it is nice to able to stream music from my Android device if I needed to. With the Fiat, you don't have that option.

Also, I find the Tom Tom navigation pod to be useless. It takes up too much space to mount and store. Thus, I never use it. Instead, I opted for a CD dash mount.Since I don't ever listen to optical music CD, this was the best I option for me. I highly recommend it. There are a few of these on Amazon for under $20. 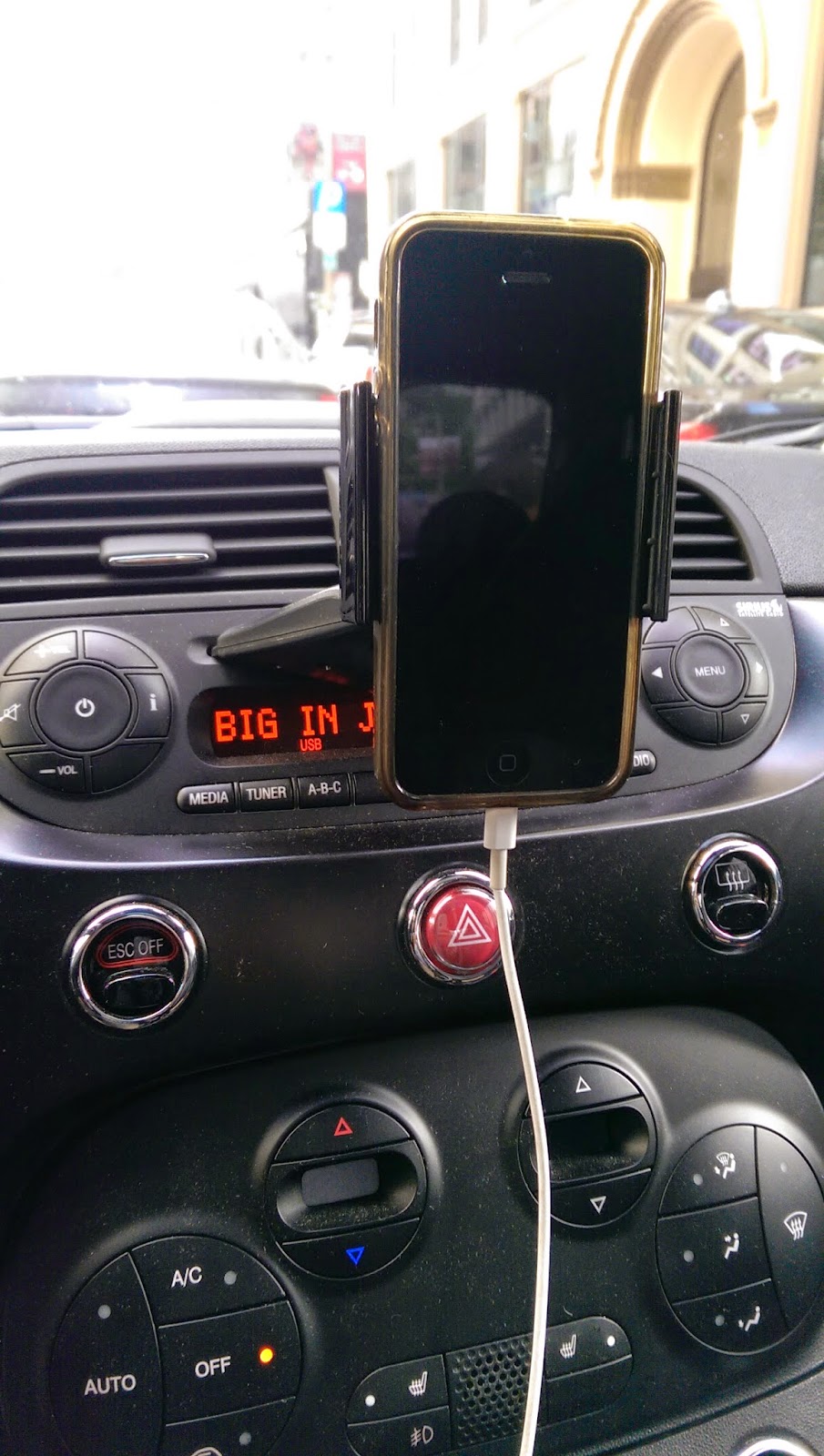 Can it be my only car? That is a tough maybe. For the times range was an issue, we always used my wife's car (which happens to be an electric plugin). Ideally, I think the perfect "one-car" for me would be a 60 mile Chevy Volt. The current Volt doesn't have the pure electric range I want but 60 miles would cover it for me and the added 'gas' backup engine would eliminate the need for a second gas car. I will definitely look at what is available once my current Fiat lease expires. Right now, I still think the Fiat is the best bang for your buck. No regrets and I'm fully on-board with the whole electric car movement/bandwagon.

Conclusively, I think this is one of the best commuter cars out there. There is nothing that beats it in terms of price and cost-to-operate in the State of California.


Posted by fortysomethinggeek at 8:33 AM