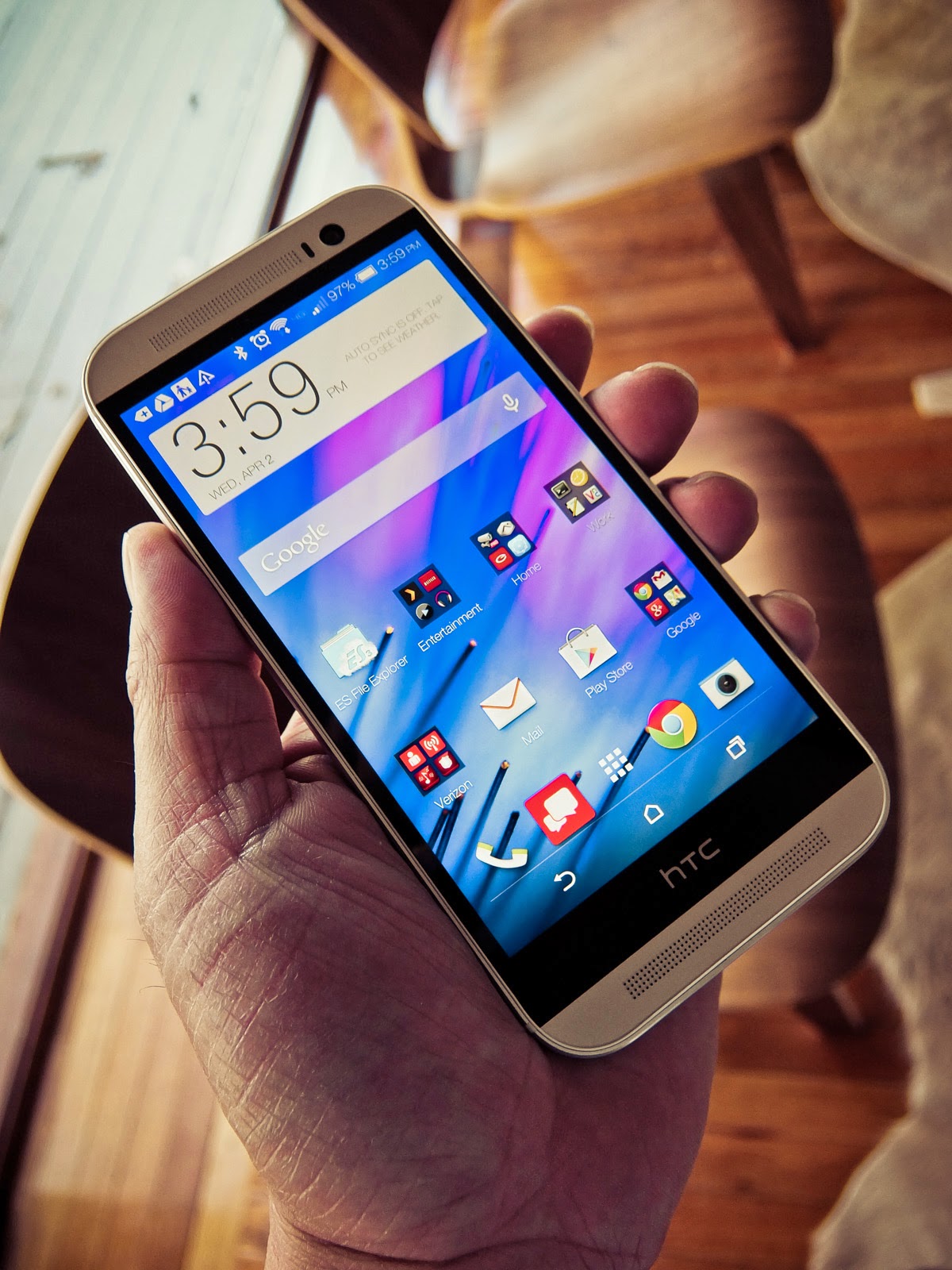 For as long as I can remember, I have been a dual OS phone user. First with Windows Mobile and iOS. Then with iOS and Android. I've always carried two, three phones on me at all times.

I've owned and carried several Android phones through the years - Moto Droid, Droid Incredible, Galaxy Nexus.  None of those phones kept my interest besides the fact they were partially work issued. Now, in 2014, my latest work issued phone is the HTC ONE (M8). This is HTC's current flagship phone. The company is riding on this phone to be a success. Will it? 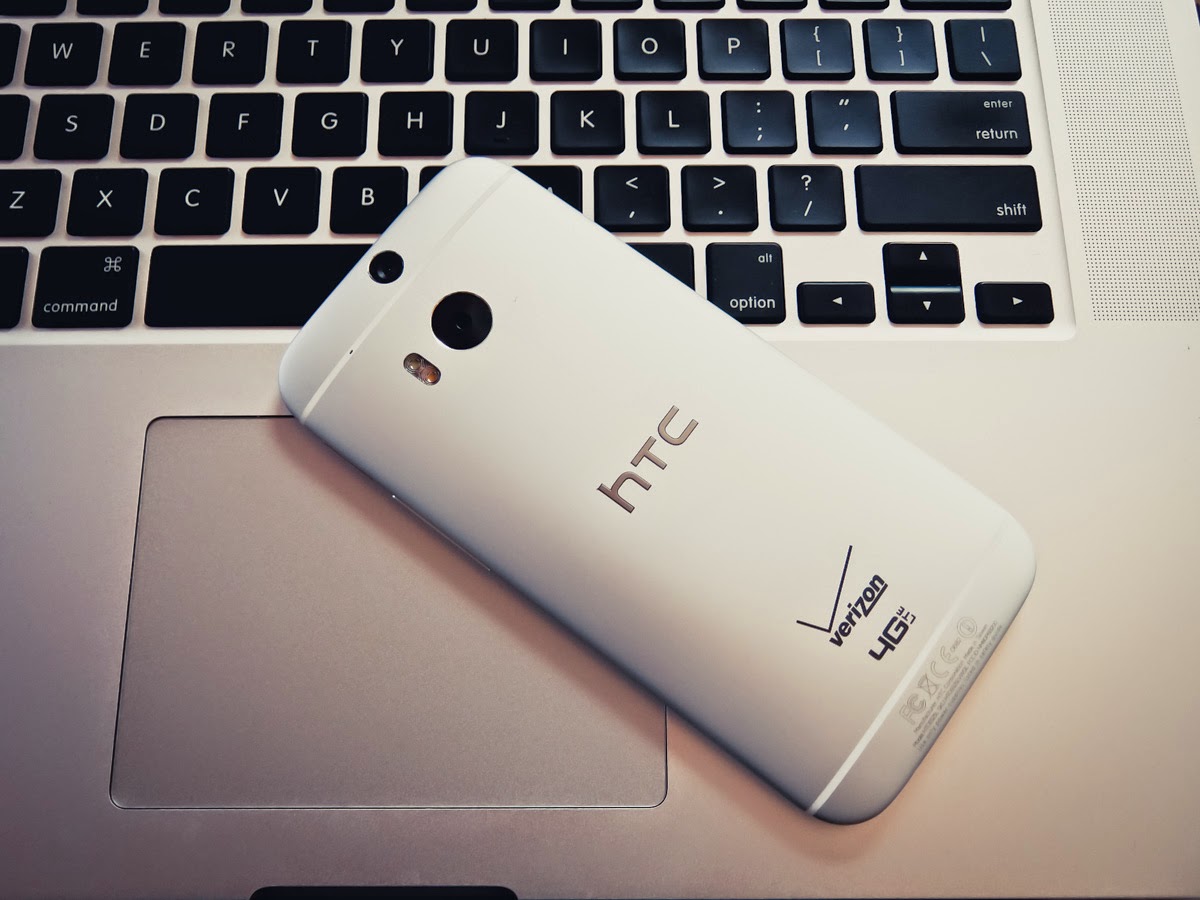 I can pretty much pick any phone I want that runs on Verizon - LG 2, Galaxy Note 3, etc but I chose the HTC One. I chose the HTC One for it's incredible build quality and overall compromises on features. Is it the fastest? Does it have the best camera? Does it have the largest screen? The answer to those questions are no.The Samsung Galaxy Nexus left a very bad taste in my mouth (due to Verizon and Google's handling of the updates and poor battery life) that my main concern was battery life and overall usability. Stock Android isn't a big draw to me any more (aka Nexus 5 and stock Android) and HTC Sense 6.0 doesn't offend me much.  And I'm still stuck with Verizon (due to work) so this was my best option.

I'm going to be playing with this phone for a while and report back with my findings. But for now, here is a first review.

Spec wise, you can read about it all over the Internet as this is a fairly recent new flag-ship phone from HTC. Quad-Core SnapDragon 801 processor, 2GB RAM, 32GB Storage, 5" 1080p LCD display, yada-yada. This is my personal review from a dual OS, multi-platform agnostic user.  Since I'm a dual OS handset kind of guy, the Android vs iOS debates are pretty silly.

So far, so good. I really like the build, fit-n-finish. The weight feels really hefty. Initial findings are good with the exception of the mediocre outdoor, sunny LCD view. The phone's display appears too dark compared to what I am used to. Otherwise, the 5" 1080p LCD is pretty fly indoors. I like it!

The camera has a low megapixel count but the sensor size makes up for it. It is a Lytro like implementation using two lenses for post processing. I think the "Duo camera" is a bit gimmicky because all the post effects looks cheesy and I can do a much better job with Photoshop on my own. This is coming from a guy who has over 40 terabytes of RAW photos spanning thousands and thousands of images. I have a pretty good Photoshop-Lightroom work-flow so no cellphone camera is ever going to impress me.

Below is an example of the Duo shot's attempt at re-focusing for depth of field. The second picture has that fake tilt-shift, fake bokeh effect. Again, I can do a better job with Photoshop on my end.

It has a f/2.0 aperture and a 28mm wide field of view which I like. This means it is great for low-light shots. The photo looks good inside the camera but when you take it out to print or view on a high res display like my 15" Macbook Pro retina, you can clearly tell that HTC still needs a lot of work to improve their camera. It still looks like a photo shot from a cellphone. Again, I don't mind much because I always shoot with a real camera when I need to. The quick shooter is good for social media sharing and quick snaps. Here is a pretty decent low-light shot of my Harmon Kardon Soundstick III in near darkness. The image is a bit noisy compared to my DSLR and m4/3 large sensored camera but I gotta say, it is pretty good for a cellphone. 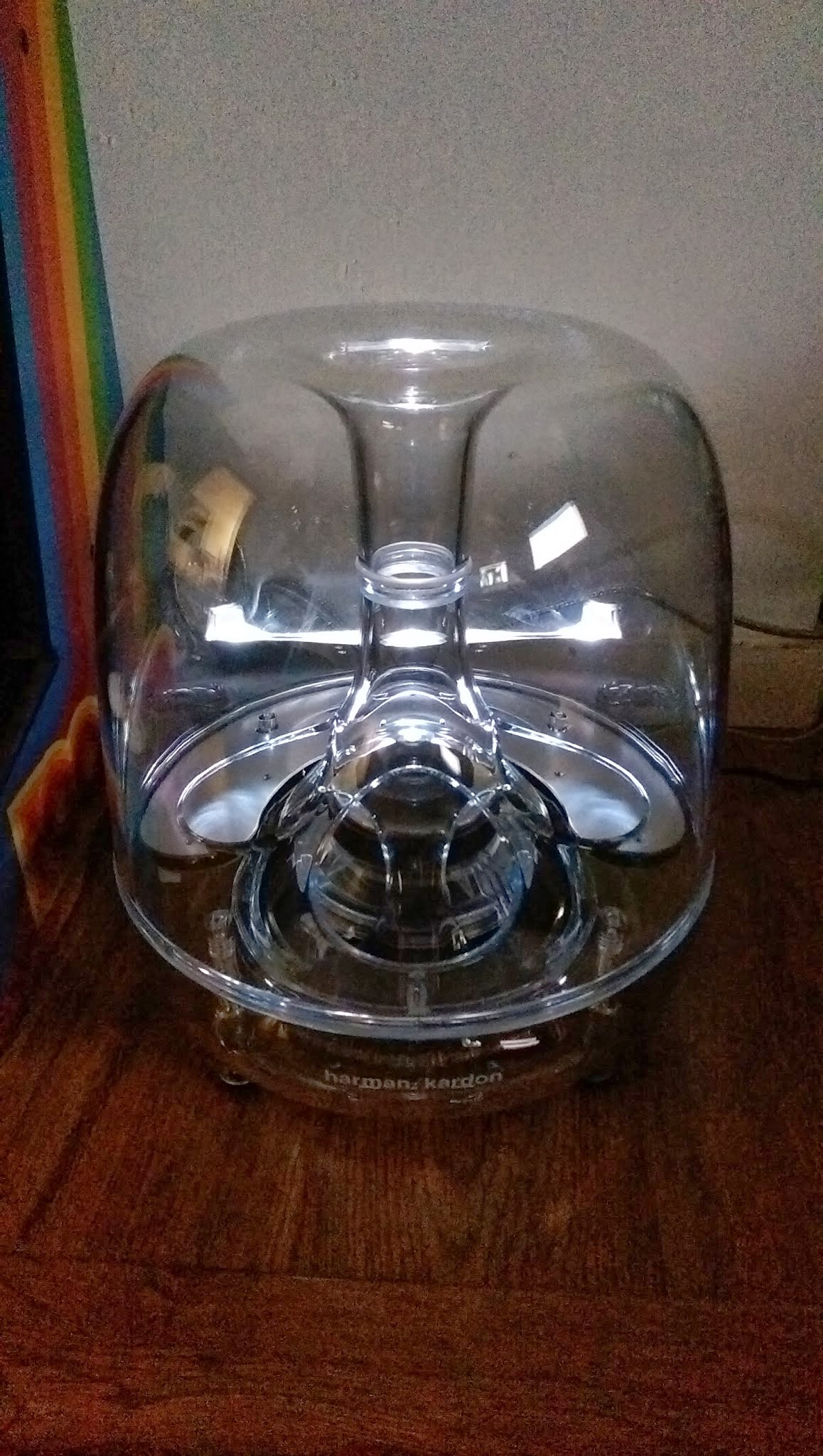 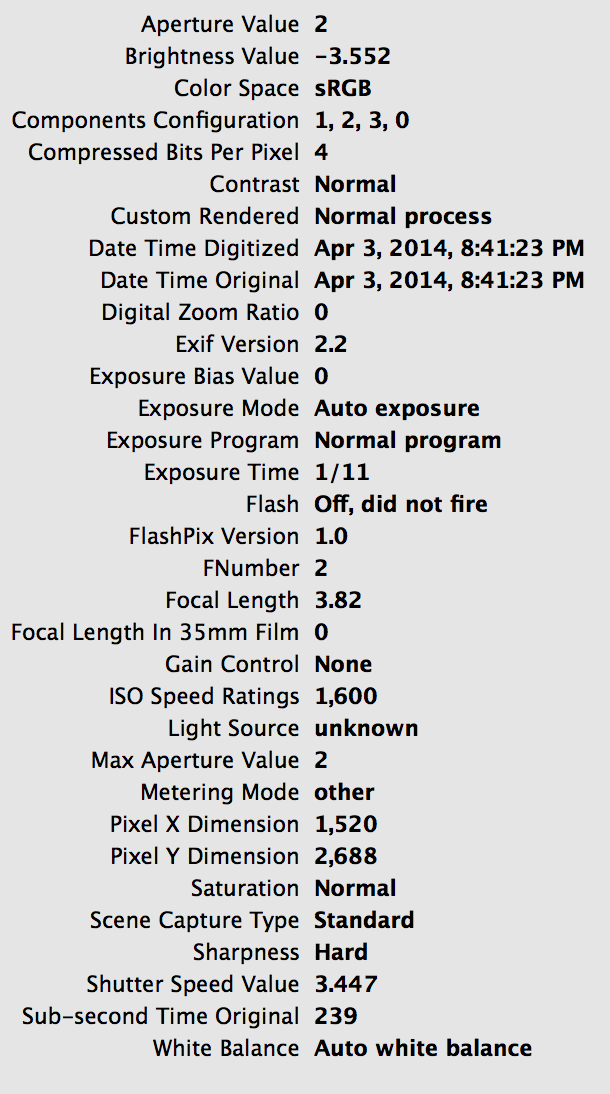 The camera has some manual controls but it isn't quite 100% manual. You can't seem to adjust aperture f/stops so this is more of a aperture priority mode shooter. An AE lock would be nice to have. 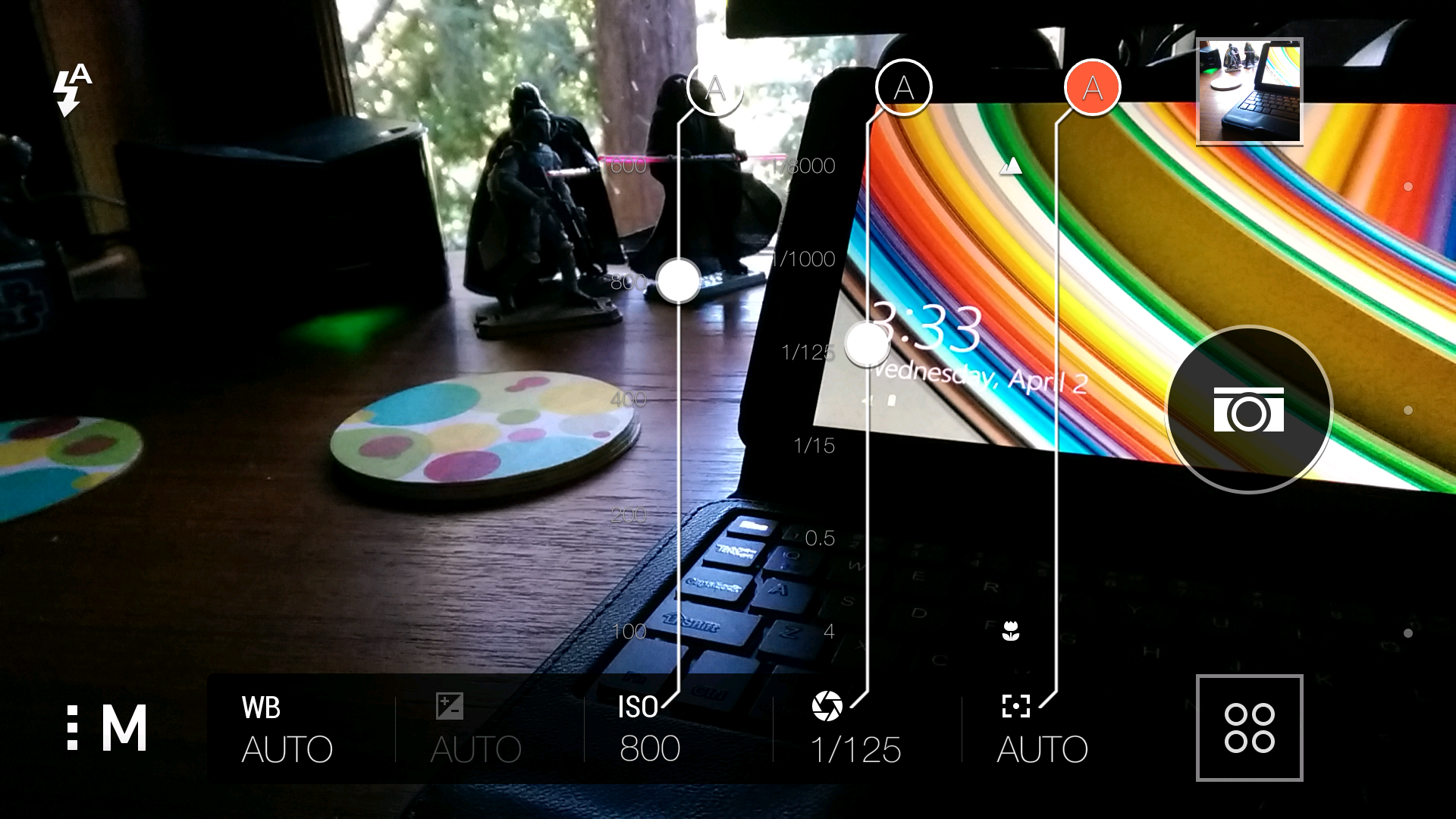 Overall, the sample shots I've taken over a course of 4 days indicate to me I will be satisfied with it "as a cellphone camera."

It kinda works but it needs a bit of work. For example, it looked at my old iPhone backups in iTunes and was able to get my contacts and even old text messages. Transferring photos and music is still a big miss. Photo-wise, it attempted to gather my iPhoto libraries but it was an in-cohesive mess. Here is an example pictured below. Those file/folder paths makes no sense to me whatsoever and pictures are scattered all over the place. I have terabytes of photos which is probably beyond the Q/A team at HTC. 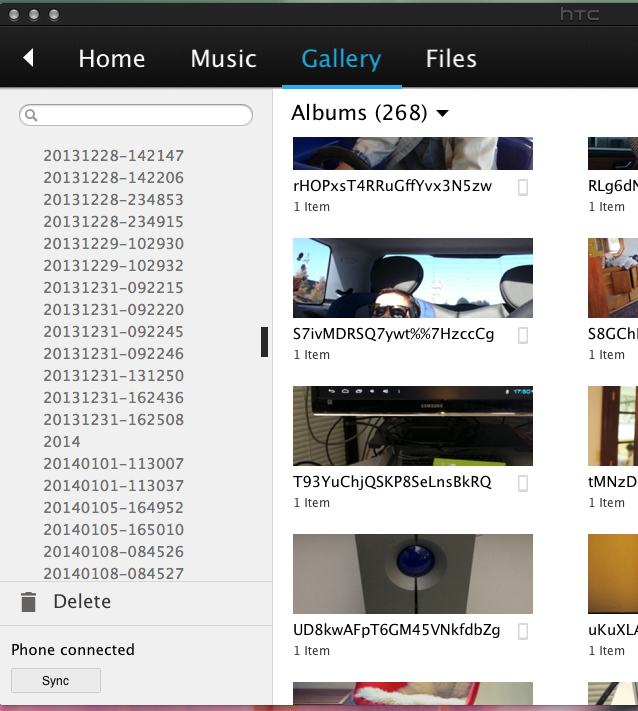 Music is a little better but not perfect. It was able to get my locally stored music (recently purchased music) but since a majority of my 20,000 iTunes Music library is in the cloud, it couldn't get those songs. Again, a picture tells a thousand words. I have over 20,000 tracks and more than 90 specific playlists (static and rule-driven). Many of my playlists have over thousands of tracks. Again, I suppose HTC's Q/A team don't factor in people with HUGE music and verbosely organized libraries. 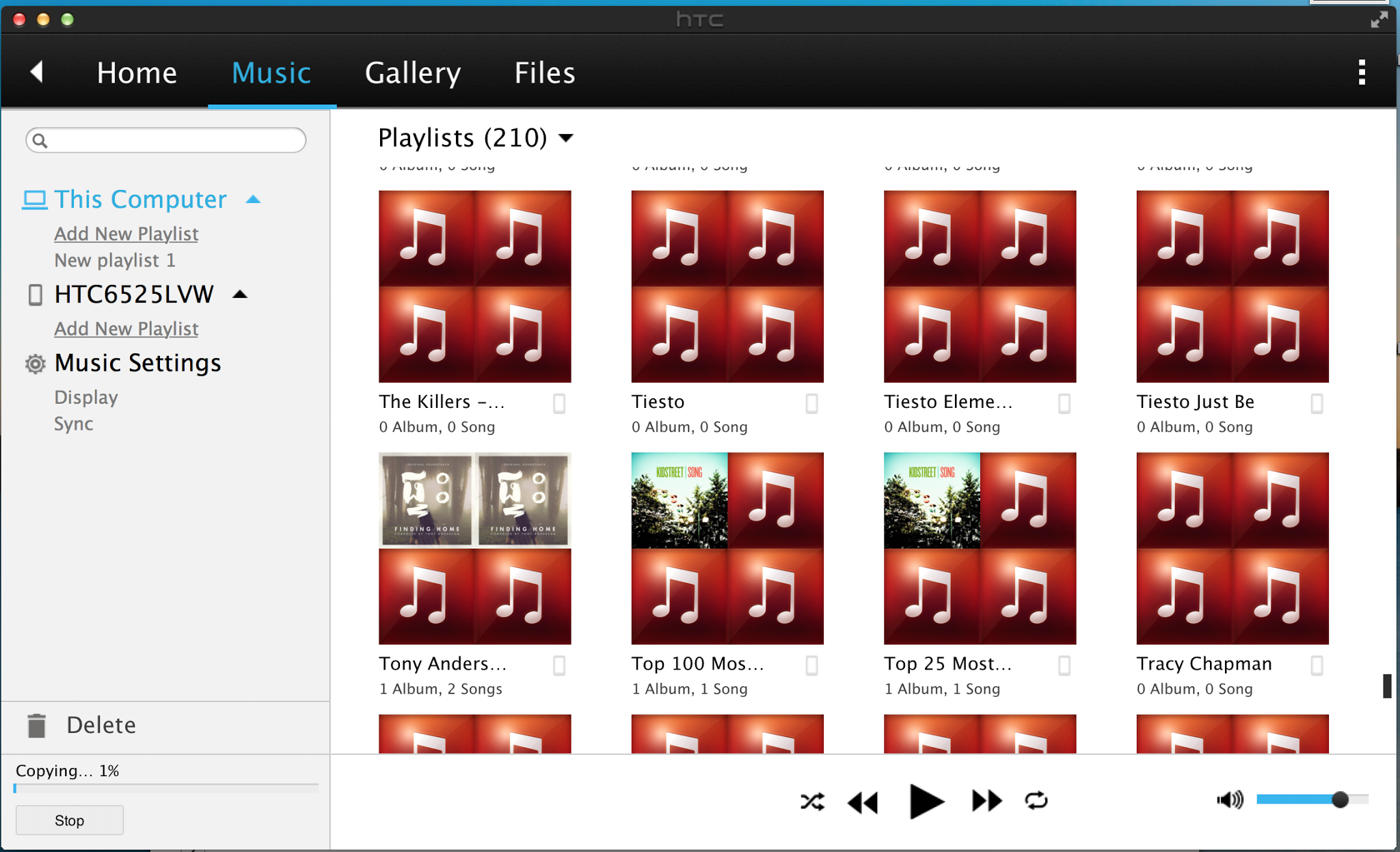 A good solid attempt but not 100% perfect. I think for these reasons, I will continue to be a dual OS phone user. I'll keep my iPhone for photo management and music playback.

Well, this is running Kit Kat 4.4 with HTC's own skin, Sense 6.0 (or Six Sense) on top of it.  There are a few things I like. VPN. For the first time in 7 years, yes 7 years, I have working Cisco IPSEC VPN on an Android phone. Wow, this is a pretty big deal. Sure, I've tried hacky stuff in the past but it was flakey. This isn't stock Android and appears to be a licensed 3rd party product baked into the phone. Next, I like the fact OTG supports exFAT out of the box. My large 32, 64,128 USB exFAT formatted sticks mount using an OTG adapter. Lastly, this phone has built in "Helvetica."  Yep, this is a big deal design wise because it makes the UI more pleasing to look at than the garish rip-off Roboto font in standard Android. Helvetica is not on by default but a toggable option. The interface does look lovely. 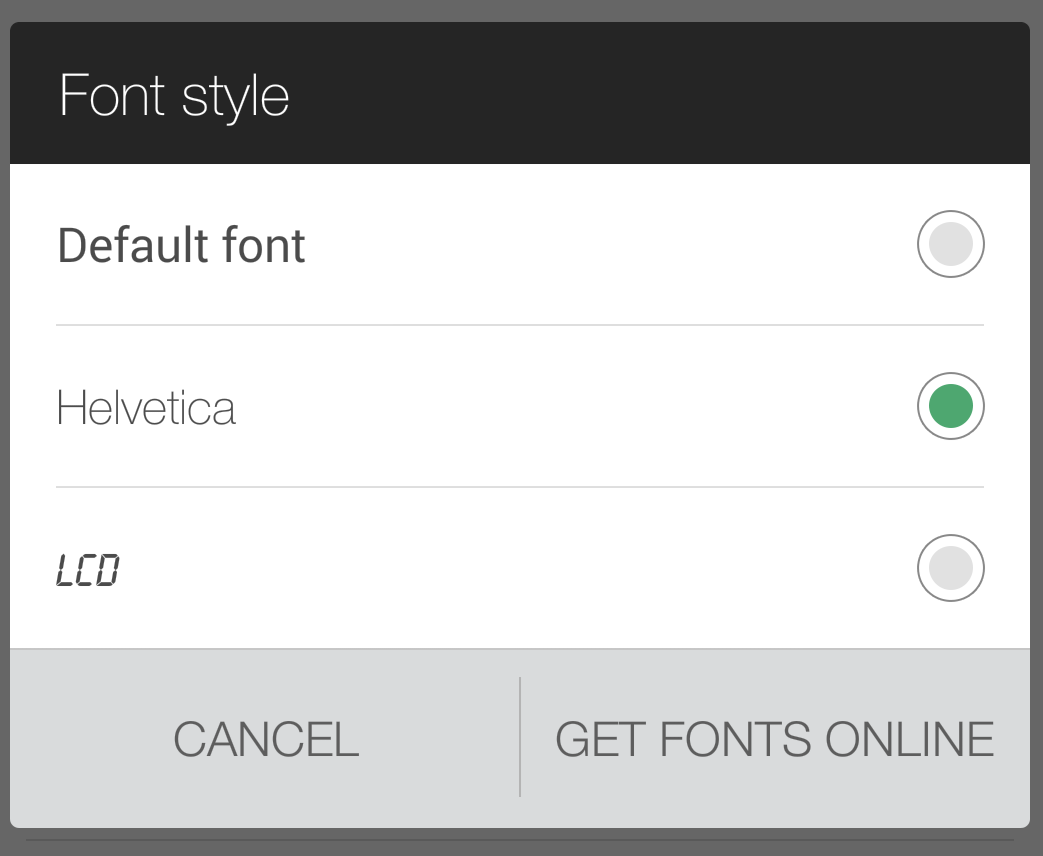 Sense 6.0 also comes with a feature app called Blinkfeed. Blinkfeed is a Flipboard curated clone. It is a fullscreen widget that polls curated content in a fashionable format just like Flipboard. It works pretty good. It is bloatware but it is nice. 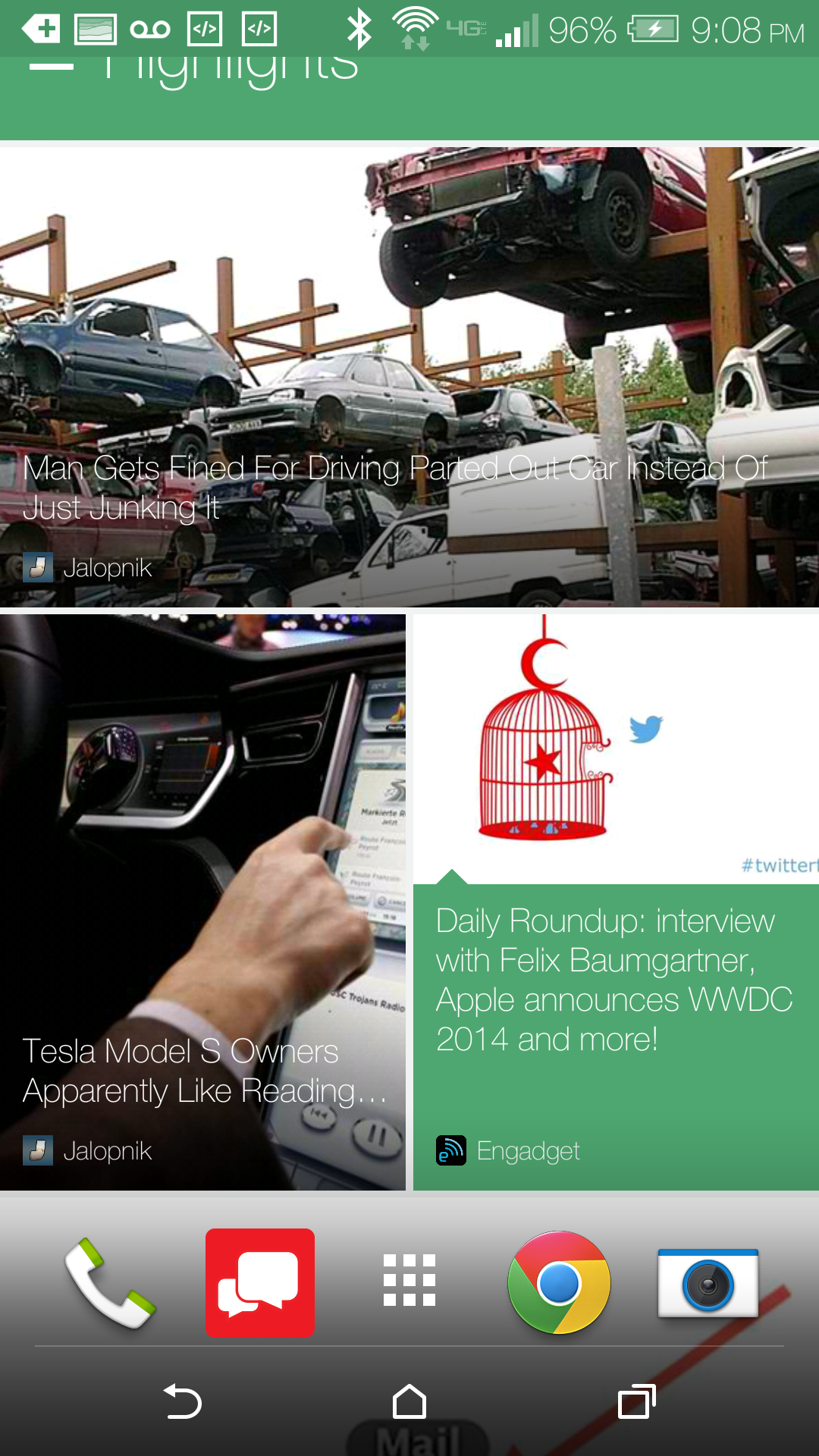 There is also some Verizon bloatware. Again, I'm not offended. I have 32GB and also another 64GB in  the micro SDHC slot. Which reminds me about another annoyance to write about. The micro-SDHC slot uses a tray and you need a clip-board pin to pull it out. This can be quite annoying if you want to randomly swap out SD cards on-the-go. I've used the OTG a few times and it works with USB pen drives. 2.5" portable drives is asking for some trouble because the phone doesn't have enough juice to power them.

Battery life is a hit-n-miss. This is hard to say. I'm eating battery pretty quick and I don't have an explanation for it. I'm getting 5-6 hours. I seem to have back luck with battery performance with Android in general. I can go two days on my other OS phone. I'm probably going to have to tailor the HTC One and customize it to get the most out of it. I'm already running at the lowest brightness indoors and have the screen turn off most of the time.

As for speed, there are times the phone's UI feels a bit laggy. This may be due to HTC Sense but in general it is as fast as any other phone I've used. There hasn't been anything of quantum difference from what I've been using the past two years. I think the performance envelope of smartphones have plateaued.  Call quality has been good and Verizon reception is fine too. People's phone service is totally dependent on their locale so I'm not going to either rave or complain about it.

Wi-Fi is a bit of a let-down. On a 2.5GHZ channel, I'm only getting 54-66 Mbps. On a 5GHZ channel, I'm getting 144 Mbps (rarely). And this is the phone sitting 2 feet away with clear line of sight away from the base stations. This is not unique to me as I've noticed this at at least 12 different base stations at different job and various sites. I've tried various Wi-Fi analyzers and it is still slow.

Here, I am running an iPerf app on a 5GHZ channel and I'm topping out at 54.6 Mbits/sec. The server on the other end is on Gigabit and always gers 980 Mbits, 110 MB/sec which hits Gigabits limits.
These results are pretty slow if you ask me. Again, I don't expect a smartphone to behave like a normal computer as I understand there are heat and battery power management issues. I don't think I've ever read any reviews on-line that put actual metrics on wi-fi performance as they should. I would have like to have known this before I got this phone. 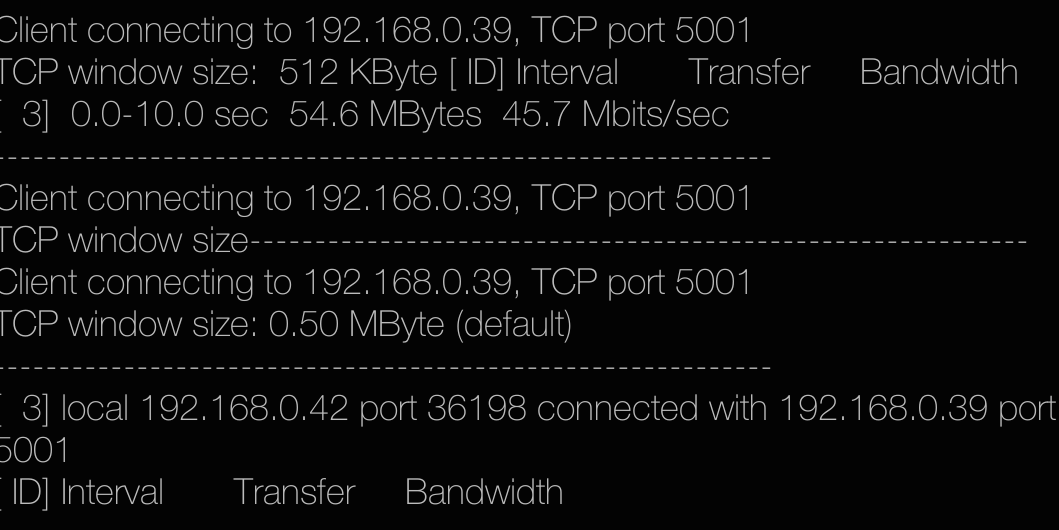 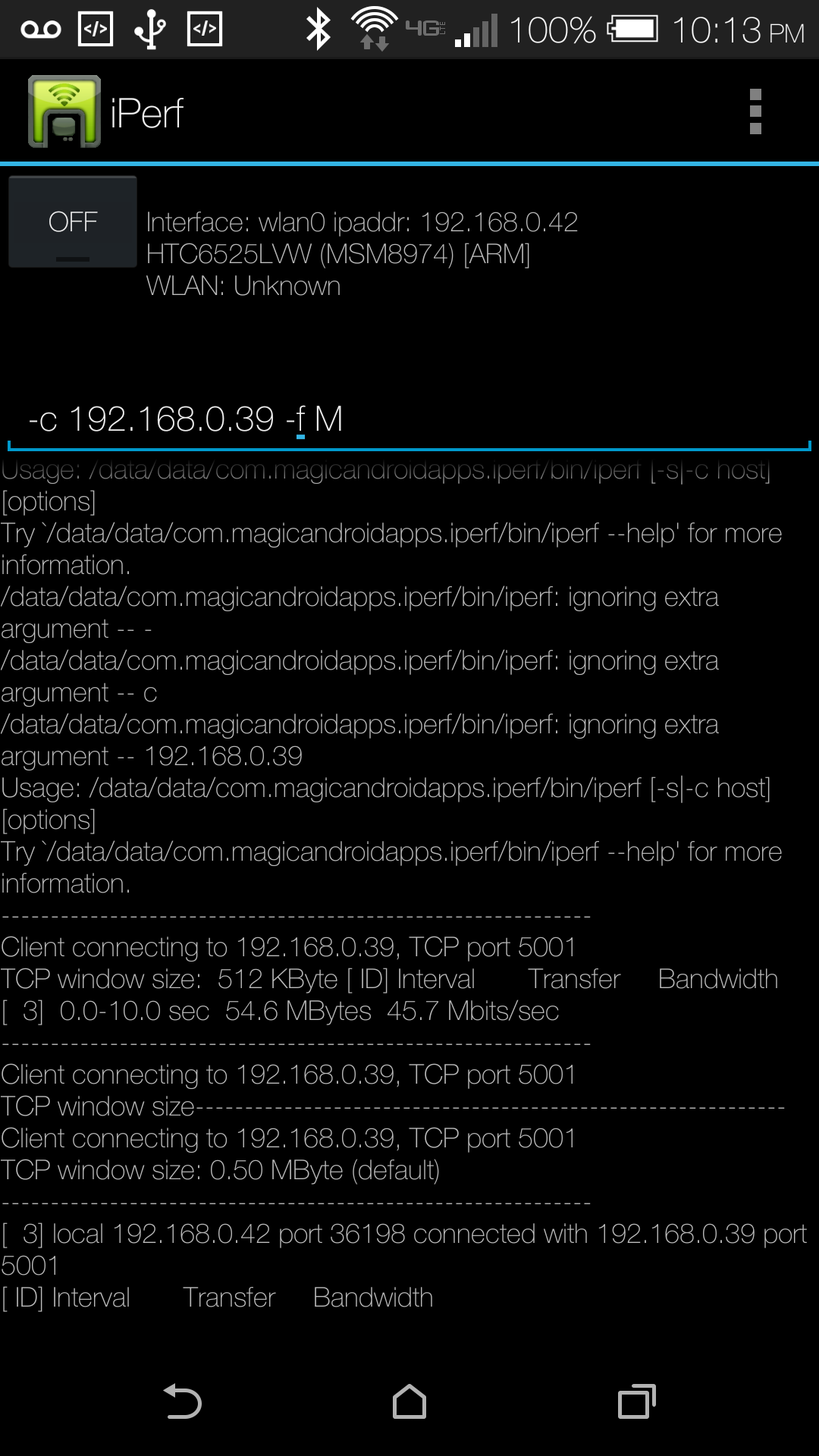 For comparison, here is a computer on the same Wi-Fi channel with zero network traffic to the same iPerf end-point.

So what does this mean? Not much because I can still stream 20 Mbit movies over the network on PLEX from the HTC ONE (M8). It just means I won't be transferring gigabytes of files over the network but then again, SAMBA/CIF copies are woefully slow and pathetic on phones. So remember folks, all the bullet point specs don't mean squat in the real world.

I'm hoping this phone works out for me. My last HTC was the Droid Incredible and it was a pleasure to use while I had it. Like always, there will always be something newer or better just around the corner. I really like the screen (indoors) but I do think it is a tad slightly too big for my preference. I definitely love the fit-n-finish on this phone that I plan to use it bare (without case). It just feels really good in the hand. I'm also glad HTC brought back microSD. The phone works for me. I get my emails, I can VPN into work so I can SSH into remote servers, access some databases. At home, I can control my home automation, security cameras, and even handle my electric car.  Is this phone perfect? No, but it does a lot of things right. I'll be in love with this phone until hopefully June with my other OS phone gets it's annual update.

So this is my first review on this phone. I'm using it everyday and I find something useful and I will end up sharing it on this blog.
Posted by fortysomethinggeek at 7:17 AM