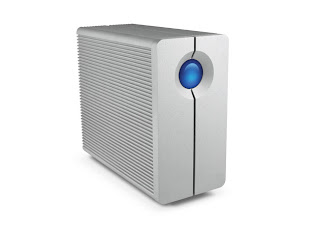 Last week, I blogged about getting a LaCie 2big Thunderbolt drive.

Original post can be read here. It was a quick test using them with SSDs instead of the included 7200 rpm Seagate drives. 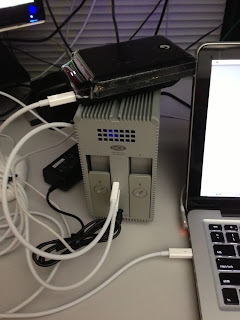 Today, I will give you my layman unprofessional review.

My unit is a 4TB model and replacing the drives is pretty easy. LaCie's claim of 320 MB/s is pretty accurate in my testing and that claim has been confirmed by various reviews. In fact, when I replaced the drives with SSDs, I was getting 400/475 MB/s.

For some people (mostly Mac users with Thunderbolt before June 2012), this may be the best bang for your buck. Solid State drives (SSDs) will give better raw speed but at the cost of disk size. This unit cost me as much as a 256GB Crucial M4 or Samsung 830 SSD. Instead of 256GB, I get 4TB. You can try an e-Sata RAID box but you'll be topped out at 200 MB/s which is e-Sata's theoretical ceiling.

So, there is no denying that units like this can be appealing to a certain audience. I can see that target audience being video and sound editors who need a big fast scratch drive. Note, I said "scratch" drive because this unit is a striped RAID 0 array. If one drive goes, the entire array is gone. So if you intend to use this drive, I suggest you keep regular backups.

Next, in terms of usage,I had no problems with daisy chaining drives (see picture above) or monitors. Nor did I have any problem with computers going to sleep.

Now, there are only two (maybe three) complaints:

1) This is not a true hardware RAID. The RAID is done via OSX Disk Utility RAID tools. This is buried in the specifications if you care to read. I didn't.

2) By not being a hardware RAID, this is not a bootable drive. I tried and tried installing a clean OS. Apparently, with Lion (and Mountain Lion), there is no recovery partition on a software RAID volume.

Are these criticism worth demoting the product? That is up to you to decide.

Overall, I can't complain considering it is a big drive to shuttle files around.


You will get 300MB/second consistently which is pretty great for most people. 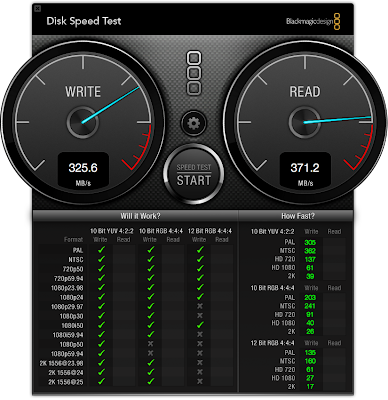 Posted by fortysomethinggeek at 11:48 AM