13 years ago,  I got myself an IBM z50 Workpad. It is the grand-daddy of the upcoming Microsoft Surface RT. 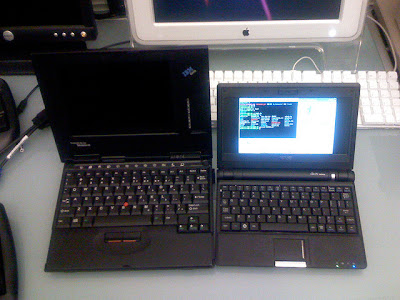 In the picture above, it is the device on the left next to the first netbook, the Asus EEEPC 701.

I bought it because I wanted something to compliment my Thinkpad 600E and 701 of that era.

Windows CE promised to do many of the great things Windows 8 RT intends to do: provide portable productivity with the option of a desktop UI and the ability to run Microsoft Office in a thin-n-light form factor.

(Does this image look familar?)


And this is why I think Windows RT will fail. It is the same promises from Microsoft re-hashed for this generation.

I am a long time Windows CE user. I started with the Philips Velo 1, NEC Mobile Pro, Toshiba E-Series, HP Jornadas,  and lastly the Dell Axims at the dawn of the iPhone era.
I still call it Windows CE and never took to the gussied up name changes like Pocket PC or Windows Mobile.

Windows 8 RT is no different. It may have a new set of API and a more focused intent but it isn't true Windows. You can't run legacy apps.

RT's app selection is pitifully lacking. Metro apps pretty much suck. There are about 100 apps and the major ones like Ebay doesn't even work correctly; launching a web browser for every interaction.

Windows RT (ARM edition, aka Windows CE 2012) promises to have a dekstop mode but only Microsoft blessed apps like Office runs on it. I guess the Office code is so old and cruddy they didn't have time to port it to Windows RT.

The name is also confusing. Many of my friends and relatives have no idea that RT will not run their old Corel Draw. I wonder how many people who pick these up during Christmas will be surprised to know it won't run their old apps. Simply, Microsoft is not doing a good job of informing the consumer.

There will be no third party desktop apps. All apps must be delivered in the Microsoft app store. According to Microsoft's own words, there will be no porting or virtualization of legacy apps from x86 to ARM. So forget running VLC, Photoshop, Open Office, or even FireFox.

Running Windows on alternative architecture is a gamble I prefer not to do again. I am one of those old guys who bought DEC Alpha NT Workstations because it was RISC and suppose to blow the pants off the Pentium Pros. Unfortunately, those DEC Alpha boxes pretty much sat and did nothing because of the lack of apps.

Without a vibrant app ecosystem, Windows RT is late to the game.

In fact, I have used the z50 for the past 12-13 years. It has a DB9 serial port and I use a pocket hyperterminal app in cases where I need to serial console into a router, switch or old firewall. Battery is shot and the app runs off a 256MB Compact Flash card.


Lastly, the z50, back then cost around $600. I think I spent around $3-4,000 on the latest and greatest Windows CE HPC, Tablets, and pocket pcs. I won't do that again. Over ten years of Windows CE ownership, I am glad to skip this. I might change my mind if there is a $200 RT device that can boot a *NIX operating system like Ubuntu, Fedora, Debian, or ArchLinux.

I definitely won't be getting any RT device.

I am also surprised by the fact people are still confused about RT
Here is a sampling of comments on the internet from Gizmodo, Engadget and the Verge. 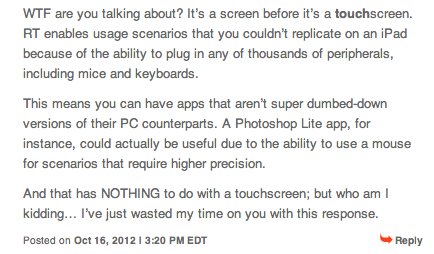 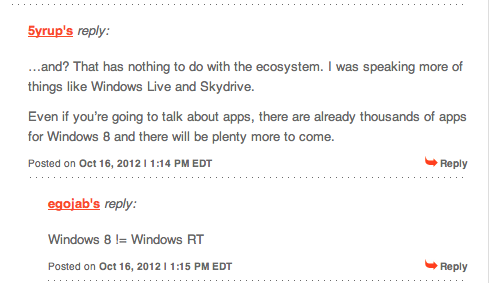 I expect to see a lot of returns after Christmas. Consumer confusion on this is deafening.

The Surface Pro, is a different subject altogether. It has the ability to run x86 legacy apps.

I would at least hold out for the Pro models coming out later in the year. For now, I will have to see how the ecosystem matures for RT.

Finally, there is one guy that I agree with. From a CNET thread. 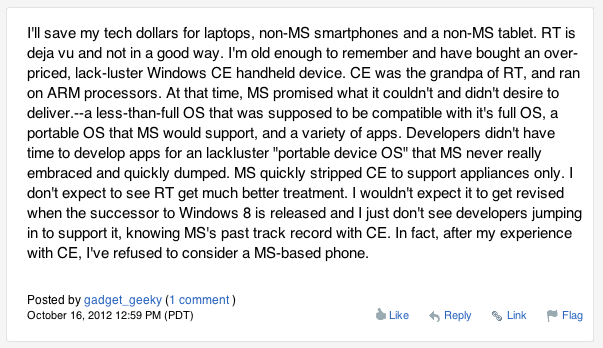 Posted by fortysomethinggeek at 11:12 PM