The Nexus 4 was announced today. I went over and looked to see if it was a worthwhile upgrade from my Verizon Galaxy Nexus (I carry two phones).

Looks like it  has some great specs and the off-contract is killer. Unfortunately, there are two glaring problems:

The Galaxy Nexus is my work phone on Verizon. There would be no way my employer would let me switch. No LTE in 2012 on a flagship device is ridiculous. I have LTE on  all my devices: Galaxy Nexus, iPhone 5,  iPad 3, and my Mi-Fi. There is no way I am going back. HSPA excuses are lame and I can't believe people are justifying it online.

The storage limitation is also whack. The argument is everything should be in the cloud.
Well, I do store all my music in the cloud. I use both Google Music and Apple's iTunes Match. I have about 400GB worth of music on iTunes and probably 20GB on Google's music service.

16GB is simply not enough. Look at my current usage below. On a 32GB Nexus, I only have 3.3 left. I have already gone past the 16GB marker. On my iPhone, I am using close to 40GB with no music files on it at all. The majority of my use are photos/home videos and PDFs. I am a father and take lots of photos. I tend to keep photos/videos on my devices because I tend to edit them later on.

The new Nexus 4 is a non-starter for me. I think there are many who would probably agree with me. The Nexus 4 is definitely not a 2012 flagship device.

Screenshot of my typical usage. 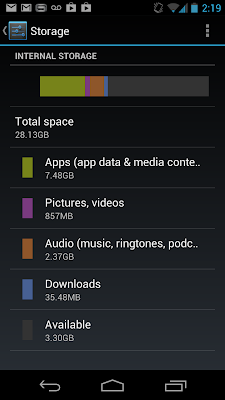 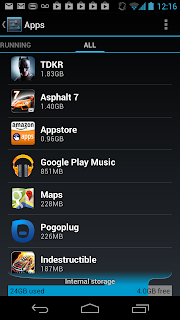 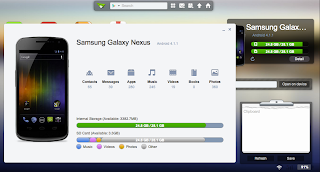 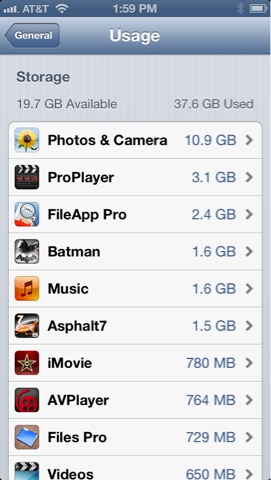 Posted by fortysomethinggeek at 2:29 PM