I like recycling old computers. I always find a great need for things like a firewall, an intrusion inspection device,squid proxy server,etc.

However, there comes a point when it isn't worth it to use old power hungry computers. It simply isn't feasible in the day and age where you can virtualize everything. In addition to energy consumption, space is a concern. Then again, there are some old computers suited for recycling today. The one I am about to discuss is perfectly suited for the task at hand.

I have an old MSI Wind Desktop PC lying around and it is perfect. This machine was popular in 2008 due to the easy hackintosh capability. It was the PC equivalent of the Dell Mini 9 of the time. All you needed was a special USB boot image to install a vanilla retail DVD of Mac OSX. It is a low power ATOM based PC that consumed a max 35W at full load. Basically, it is a netbook in a small enclosure for two drives. It is also very compact. It is about the size of a VHS player from the 90s.

By today's standards, it is pretty much useless as a desktop computer. It has 1GB of ram and a slow cpu. Linux distros run pitifully slow. The GMA 950 gpu make it unbearably slow to run anything past Snow Leopard if you want to use it as a mac. I bought it for $130 back in 2008 and it served me well as an iTune server.

After using FreeNAS for a while, I figured a new use for this ancient relic. A daily "mirror" contingency backup server. I like to keep 3-4 backups of everything and an extra backup isn't going to hurt. I figure I'd throw this into my backup mix.

My needs was very simple - a low-powered rsync backup server and this was the ideal solution.
My PogoPlugs would work but they do not have direct SATA. Connecting drives via USB isn't ideal. Furthermore, I really like FreeNAS over manually configuring /etc files and setting up a server from scratch. Newer barebones nettops tend to concentrate on micro size with 2.5" drive bays so I excluded them.

The MSI Wind has two drive bay but most importantly, a 5.25" CD bay. This meant I could get a swappable enclosure. Instead of using a CD-ROM, I'd use that bay to shuttle drives in-and-out.
This Kingwin only cost me $18 and is completely tray-less (no screws or backs for HDD). This is pretty important because I can continually swap out drives. 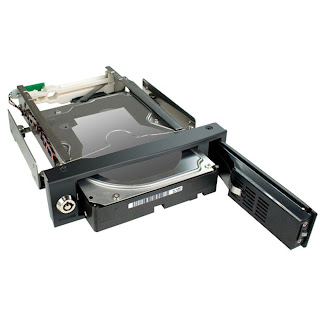 Well, I have had it running for 2 months and it has been perfect. As you can see below, 60 day uptime.
FreeNAS 8.2.0 installs without a hitch. Since this machine only has 1GB of RAM, I don't use it for anything heavy duty. I store ISO disk images but mostly, it is used as a Rsync backup server for over 20 web servers. The web servers dump their web files along with daily/weekly/monthly MySQL backups. They all backup in the middle of the night and fill up whatever drive I have parked in the 5.25" remove-able bay. When the drive fills up, I simply remove it and dock a new drive in.

Since I am using FreeNAS, setting up rsync backups to another FreeNAS box is also pretty straightforward. This box also backs itself up and duplicate itself to an off-site remote "full" server. 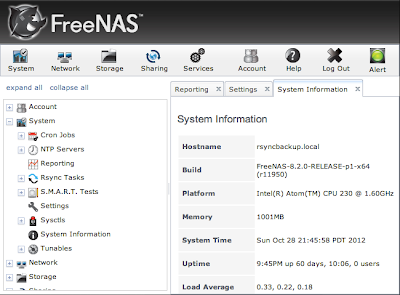 Overall, I am pretty happy with this set-up. My only out-of-pocket cost was the $18 remove-able drive bay. Installation was pretty much plug-n-play to a bootable USB stick. I'll run it till the day it dies.

Posted by fortysomethinggeek at 8:30 AM