If there was ever a reason to get a $15 pogoplug hacked to run Arch Linux, this article may sway you. 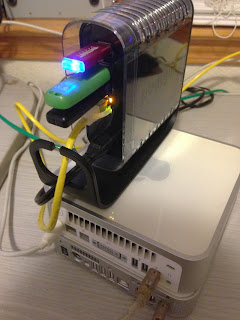 I'm going to show you how I turn an ordinary $15 linux gadget into a useful "rsync" backup client.

The tasks which I will share with my readers is the typical things I would do administering *NIX based servers. We set up redundancy and failover using some simple and tried and true methods. There really is no rocket science involved. After doing it a few times, it becomes second nature. And because of the simplicity, it becomes apparent why I love small gadgets running Linux.

The articles and methods are pretty much simplified but they illustrate the simple and powerful nature of the powerful command line.

Today, I decided to turn one of my Pogos into a remote robo-copying slave. Its only job is to do remote backups of my GIT server. Then I realize, it should be running independently as a working droid (thinking Star Wars) to find,scan my network and backup any *NIX computers running in my household. I have a few spare older 250-320GB drives that needed to put to good use, so I pared them to a Pogo.

Normally, you would initiate the copy and backup from your desktop/laptop to the PogoPlug running some form of Linux/NAS. Here, I do the reverse. I have my pogoplug go out and do all the work.

So if I turn on my NetBSD G4 mac from 5 years ago, or come home with my Thinkpad, or turn on my iMac, it would automatically back them up without my intervention. I wouldn't have to think about it. If I was working on some code on my Thinkpad. I could go out to the back-yard to my patio and from my Macbook, I can pull source code that was already synced 5 minutes earlier off the Thinkpad.

Think of it as a reverse time machine. The concept is not new. We have dedicated backup servers that do nothing else but do remote backups off-site. Here, I am using a low powered PogoPlug running ArchLinux.

In fact, it took me 30 minutes to implement it. This is the power of *NIX. So I will share it with my readers today. Everything is meant to be done on the Pogo itself.

First, I logged into my Pogo and copy my SSH keys from my Pogo to all my target computers. So if I change my passwords, it would still authenticate against it. As I write this, I am thinking R2-D2 talking to the main-frame of the Death Star. If you don't know what SSH keys are, take a detour and google it before proceeding further. In short, keys allow machines to talk to one another without using passwords.

In arch, it is pretty easy.

It will simply copy your keys over to the remote machine.

Next, I wrote a small bash script that pings the remote machine. If the machine pings, it means it is online and it will then attempt to rsync with it. Rsync is the tried and true industry standard for remote file synchronization/file copies.

Feel free to use this bash script. Simply, change the variable of the "remote_machine" to the IP or hostname of the computer you want it to ping and rsync. Since my network employs Avahi/Bonjour, it pretty much works by hostname. EG. My Thinkpad is accessible via ThinkpadT420.local
In this example, my remoteserver.local is my intended target.

I do a simple IF THEN conditional check in my bash script. If the machine doesn't ping, alert us with a message. Otherwise, proceed to rsync.

My rsync command is pretty straightforward here. Archive and update. I added progress and stats for my own reference.


Basically, my rsync logs into the remote server, copying the /var/ww/ into my destination of my 1TB Western Digital USB drive labelled, passport. The copies go into a folder, /media/passport/rsync/vps/www


After writing it, I tested it. I named my script vps_backup.sh

I then change the permissions to executable and did a dry run. 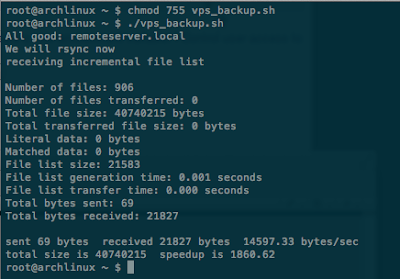 As you can see, the files and folders populate from my remote machine. The below screenshot shows two web directories. One from my iMac and another from a remote VPS. 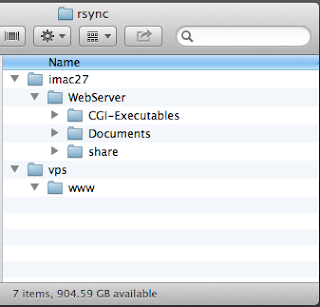 Lastly, I would use a cron job to run every few minutes. You can even do cron job schedules in Webmin. I would recommend installing webmin so you can have a web based administratie interface of your Pogo. It simplify things quite a bit.

When you log into webmin, head over to System . Scheduled Cron Jobs. 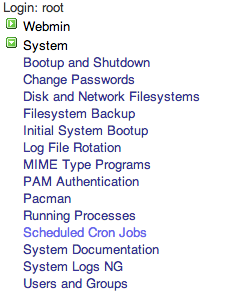 Cron Jobs under webmin is pretty much a point and click.

I specified the user running as "root" to have full system rights and pointed to the script I wrote earlier in /root/vps_backup.sh. For this example, I specified a daily midnight schedule but I could change to hourly or every 5-10 minutes. 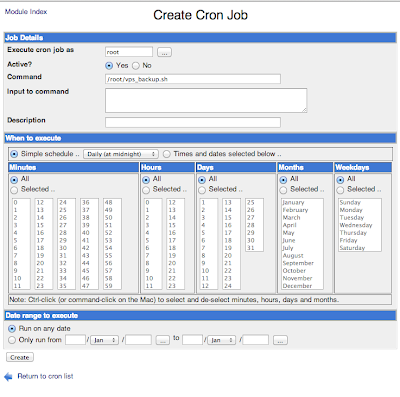 And there you have it. A simple (well, at least for me) way to do interval backups from a Pogo.

Posted by fortysomethinggeek at 10:19 AM