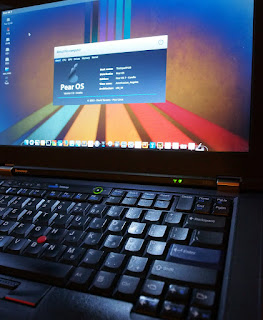 Today I am going to give my readers a review of Pear OS 7. Unlike my last "short preview," I have a been using Pear OS 7 on a live machine for more than a month now. If you want to know what Pear OS is, it is basically a Mac OS X imitator Linux distribution based off Ubuntu. It is designed to look like OSX running Linux.

I'll start off by saying. If you want a OS X experience, this is not it. Yes, the look is there and it has lot of cool things but the looks are not skin deep. It doesn't have the Mac philosophy behind it. Skinning something and adding icons does not make it a Mac experience.

Now, for my review.


About a month and half ago, my Thinkpad's OS tanked. I was upgrading my kernel to 3.7 on my Ubuntu 12.04 build and it got hosed. About the same time, I was playing with Pear OS in a VM (Virtual Machine). With my Ubuntu operating system hosed on my Thinkpad, I figure I'd give Pear OS 7 the full-time treatment on a live machine. Since it is Ubuntu based, the installation was also a good test to see if my provisioning script worked. I have this script that loads up all my required applications (LAMP stack w/ Java and several IDEs) in Ubuntu, copies my keys, preferences, fonts, color schemes, and even rsyncs a fully configured WINE set-up with a complete MS Office bottle complete with shortcuts and all. Within 15 minutes, I had a fully working disaster recovered Ubuntu based build from my previous Thinkpad set-up. Even my local mail and GIT repos carried over thanks to RSYNC from my hourly backups. 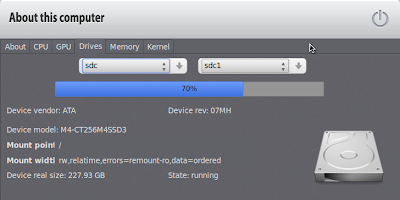 So unlike many other Pear OS reviews that rely on Virtualization, I have this running on real hardware for a considerable amount of time.  It is running on a June 2012 Core i5 Lenovo Thinkpad T420 with 16GB of RAM. The OS was installed on a 256GB Crucial M4 mSATA SSD. It literally takes 7-8 seconds to boot. Everything works- WiFi, Bluetooth, fingerprint scanner. This even works with my docking station as Ubuntu normally works. Hardware wise, I have no problems with. Software wise, it is pretty much 100% binary compatible with Ubuntu 12.10.

I literally rsynced a back-up of my old home directory with the ~/.local, ~/.config and everything carried over from my Ubuntu 12.04 install. Clicking on Thunderbird, I was able to pick up from the last email I was drafting out. 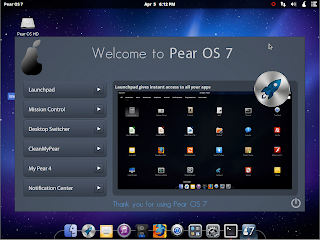 After boot, the OS consumes about 700 MB which is pretty lightweight for today's desktop operating systems. This would run comfortable on a 2GB-4GB machine. It also runs well at full-tilt, loading up VMware and a few VMs, I use all of this Thinkpads' 16GB of RAM daily. 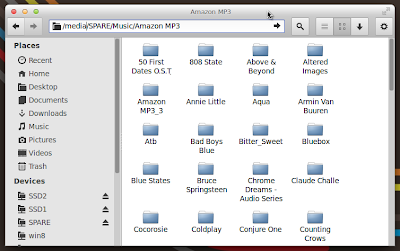 Unlike Elementary OS, nothing was broken. The "Finder" or whatever File Manager you want to call it never crashed on me. I was using Elementary OS on my full-time workstation and it was so problematic, you can read it on my blog. So if you want to compare Elementary OS Luna vs Pear OS 7, Pear OS was much more stable for me.

Overall, for a Linux distro, I like it. I like the color scheme which is nice on the eyes. The use of typeface is pretty pleasing to the eye. One thing I hated about eOS (Elementary OS) was the inconsistent behavior and lack of minimize button. Pear OS is more coherent. However, I should note, Pear OS lifted many things from eOS. eOS brought out many cool features and projects and it seemed as if Pear OS simply lifted them and skinned them with its own flair. It is the nature of open-source. For example, the "spaces" virtual windows and app switching were lifted from eOS.

Now for the Mac OSX thing. Does it live up to the hype?

As a Mac clone running on Linux, don't believe any of what other reviewers are claiming as so. I've been using OSX since day one and this is no Mac OS X experience. The Launchpad and the notifications are nice touches but there are so many glaring things that would disqualify and negate those other reviews. I will only cover a few. You won't be getting a Mac experience now matter how much eye candy is duplicated.

First, the Finder. The OSX Finder allows you to do things like set color labels, open up folders with apps and drag them to your dock. Neither of which can be done here. Also, the Mac Finder allows you to copy-n-paste any image file into an icon. If you like to change the icon of your USB stick, google it, find the transparent PNG version, and copy-n-paste it on your mounted USB stick. This is what makes OSX so colorful. You can't do that in any form of Linux distro today.

Below is an example of Labels and Copy-n-Paste folder icons on a Mac. 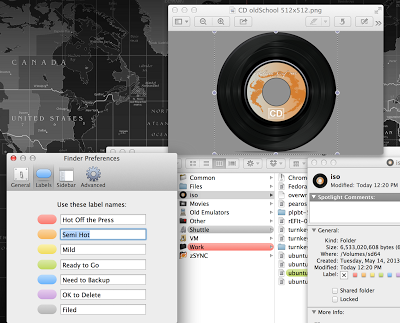 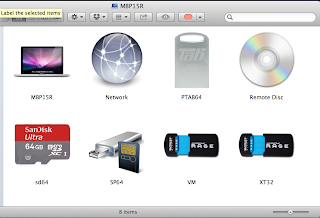 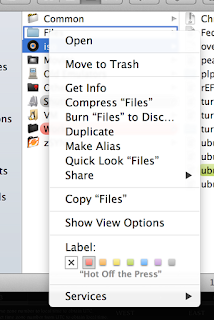 The screenshot below illustrates how you change icons for drives under Pear OS.

Simply giving Nautilus or whatever file manager a mac icon does not make it a Finder substitute. The Finder is pretty essential to the Macintosh experience.


Next, drag-n-drop is inconsistent. Drag a mounted volume into your terminal, you will get a weird launch shortcut. You can't drag folders to the sidebar to bookmark them. I'd expect a greater breadth of drag-n-drop capabilities.

Most important, you can't drag an application like Chrome into a sdcard/USB stick and have it move and launch from there permanently. You can't do that in Linux period without breaking dependencies.  This is pretty much a big deal. Drag-n-drop, drag-n-copy applications without the pretense of running an installer or run commands like "apt-get install" or "dpkg -i." Until someone figures how to do this type of application packaging,this will be unique to Mac OSX for the considerable future.

You can't have different wallpapers on different spaces or different monitors. I'll have 3 monitors and 4 virtual spaces giving me 12 screens and I can have 12 different wallpapers on each screen on a real mac. Yeah, it is a bit of eye-candy. The big thing about spaces on OSX is the ability to show open windows apps and drag them into different virtual spaces. For example, if you have a spreadsheet and want to move it to space #4, you can't do that with the metaphor they are trying to copy from OSX.

Below are my four spaces as illustrated in Pear OS. 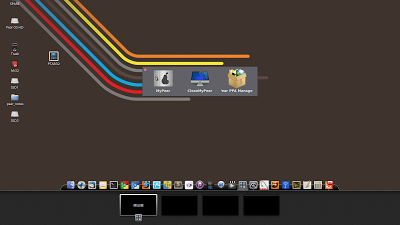 Now compare it to a Mac: Multimonitor with each space having its own distinct look. You can drag existing running applications to your space of choice.

Importantly, none of the gestures and keyboard shortcut are copied. I understand the Mac's great multi-gesturing tricks can't be duplicated due to hardware issues but I think copying keyboard shortcuts would have been meaningful. It would be nice to alternate across virtual windows with a few key strokes like you have on a real mac.

The biggest feature of the Mac Finder is to expand nested folders. I'm surprised no one was able to reproduce this in their Mac clone distro. For example below, I'd like to click on a folder and have it expand all the sub-folders to see my files.

I've only scratch the surface but the point I am making is, do not believe those other reviews that tell you can replicate the mac experience with Linux. You can't.

As always, the Mac experience under Pear OS 7 is only superficial and cosmetic.
many of these "Mac Clone distros" fail to understand the design philosphy of OS X and concentrate on the visual eye candy. I've been customizing folders/external drives with custom pictures by using simple copy-n-paste from the original Mac OS 7 days. I've been sorting my work folders into red buckets (as super important deadlines) to green, blue, and yellow. Labels are a fundamental part of Mac OS and this goes back to the 80s. It all goes back to the 80s. OSX was able to replicate the feel and experience of the classic Mac OS without the baggage and added some cool new ones.

With that out of the way, I like this distribution. I like it because it isn't garish and the theme is pretty consistent. There are nice Mac-like touches here and there. Quick-look is one cool thing that they copy from Apple. Quick-look is the ability to see a preview of the file by simply hitting the space bar when you select a file in the File manager. Examples below:

I would prefer they didn't use an obvious Finder icon and white Pear logo start-up boot graphics. I like the concept of the dock in general and overall, it works.

And if this was so much of a blatant rip-off of OSX, why am I using it? Well, I like the consistency.  It is a very well designed and good looking skin.  I know I am using a Linux OS when I use this. If I wanted to run OSX on PC hardware, I can easily do it with a hackintosh. I run Linux fulltime at work and I like to use something that is a bit pleasing to the eye when I have it interact with my other OS X hardware. I usually have three to four computers on my desk - various desktop PC workstations and laptops. I also run the same apps across OSX and Linux. Sublime 2 and SmartGit look the same on both. Having similar color scheme, window manager with similar close buttons make it easier for me when I am typing on my Macbook and Thinkpad side-by-side. I usually mount both drives via NFS/SFTP and share volumes and work off both operating system. The ability to type on a Mac and quickly go over and make edits on my Thinkpad using similar graphical interface is pretty useful.

Now here is sight to behold below. Pear OS running VMware Player which is running a Virtualized guest of Mountain Lion. Icons, toolbars, desktop windows are pretty much interchangeable. 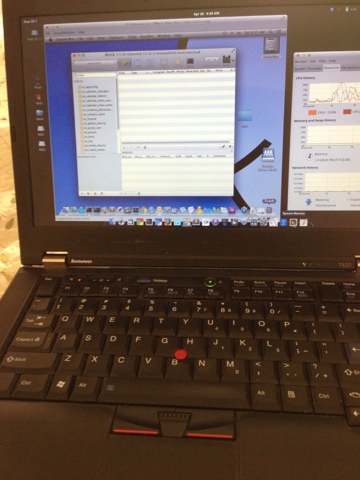 It is by no means a bad OS. Hardware wise, it works with what I have. Software wise, it is binary compatible with Ubuntu/Debian APTs and Ubuntu repositories.

It boils down to preference. If you like the theme and skinning, this distro may appeal to you.  If you are a person who uses OSX and Linux, side-by-side daily in a multi-platform environment, I would recommend this distribution.


Posted by fortysomethinggeek at 1:52 PM