Some USB 3.0 sticks. Not all are created equal 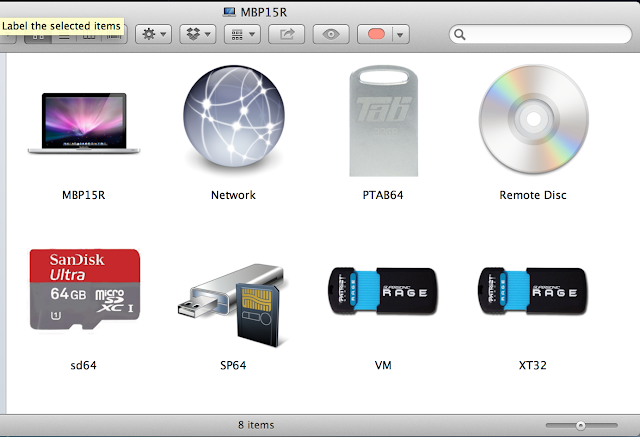 I did splurge on a SanDisk Extreme Flash 64Gb for $75; thinking a name brand made a difference. It turns out, that particular has problems of four distinct different PCs with USB 3.0.

So, today, I am going to give you some of my thoughts on some of the various USB 3.0 sticks you see that often pop up on sale.


Not all USB 3.0 sticks are the same. There is a wide variance of performance and you need to do your homework. I usually read the customer reviews on Amazon and Newegg. Many of the speed benchmarks are pretty much dead-on with an exception. The sticks benchmark real good but real copies turn out differently. For example a USB stick may start writing at 80 MB/sec for the first minute then drop down to 6 MB/sec for the last 50% of the copy.

I use these sticks for all sorts of uses. Namely, shuttling VM files via sneakernet. They also make good portable installers where I load them up with app installers or portable programs that run off USB. Lastly, they can be used as bootable operating systems and rescue/recovery systems.

Glancing at the picture below, I'll highlight some of the different sticks I've purchased. 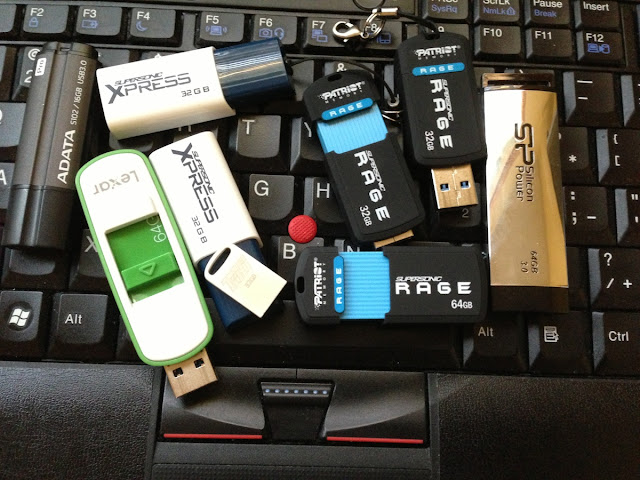 The ADATA (brown top left) are pretty good build quality. They have a great heft to them and I pick them up whenever they hit under $20 for 16GB. I can't recollect the speed but they were pretty decent. I haven't seen them on sale lately.

The Patriot Xpress (white and blue) are the cheapest of the bunch. Frys carry them and they usually have great deals. For example, this past weekend, 16GB sticks were only $11. They bench at 80 MB/sec read and 10 MB/sec writes. They're cheap and a bit thick. The key word here is cheap. I remember getting 32Gb sticks for around $22.

Next, the blue and black Patriot Supersonic Rage XTs would be my all-time go-to sticks. They're a step up from the white-and-blue Xpress at rated 180 MB/sec read, 50 MB/sec writes. I normally get 140 reads and 30-35 writes on the 16Gb and the 64Gb tends to score a lot higher. They tend to cost a bit more and i think they are worth the slight premium. Below is how the 64Bb fares using Black Magic Disk Speed Test. The drive was formatted exFAT and did surprisingly well. 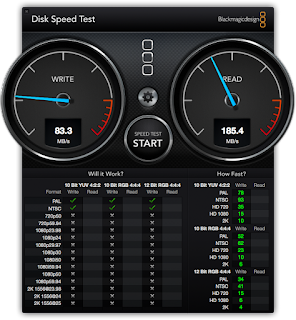 The big silver stick on the far right is a Silicon Power 64GB Marvel. It was on sale dirt cheap and I believe I paid $30 or so for 64Gb on sale. Now, unlike the Rage XTs, this one writes much faster. It writes like a hard drive at 70 MB/sec. Rated spec: 100 MB/sec read and 70 MB/sec writes.
This would be the most well rounded stick in terms of performance. You get both good read and writes. However, the length and bulk discourages me from getting any more. Furthermore, I did notice it tends to get very hot when in use. 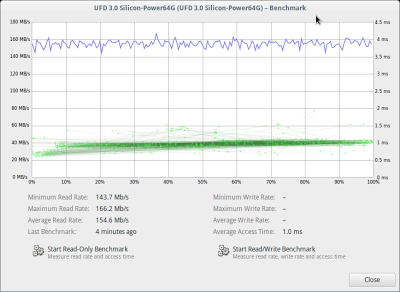 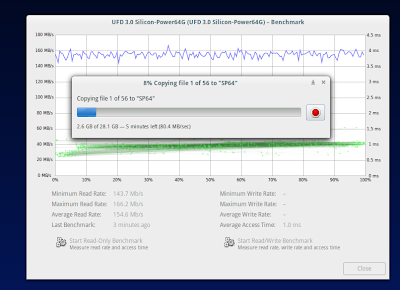 On to the next row, we have the Lexar Jump Drive in green and white. These can be had for $40 for 64Gb but I don't recommend them. Just go and read the consumer reviews. They're very slow for USB 3.0. They are slightly only a little better than USB 2.0 drives. Furthermore, they're very chunky and big.

Lastly, we have a newcomer, the Patriot Tab in silver. You can't miss it. It is the little itty bitty usb dongle. This is the first small usb nub stick I've seen. I really like the solid hefty metal. Performance wise, the rated speed is 140 MB/sec read with no write specs given. I was getting 120-130 MB/sec reads and 10 MB/sec writes. The writes are pretty poor and comparable to the Xpress 32. This stick was $30 so I picked up a few. Below is a Black Magic Disk Speed test result for an exFAT formatted drive. Performance was pretty the same either with FAT32, exFAT or HFS + formatted volumes. 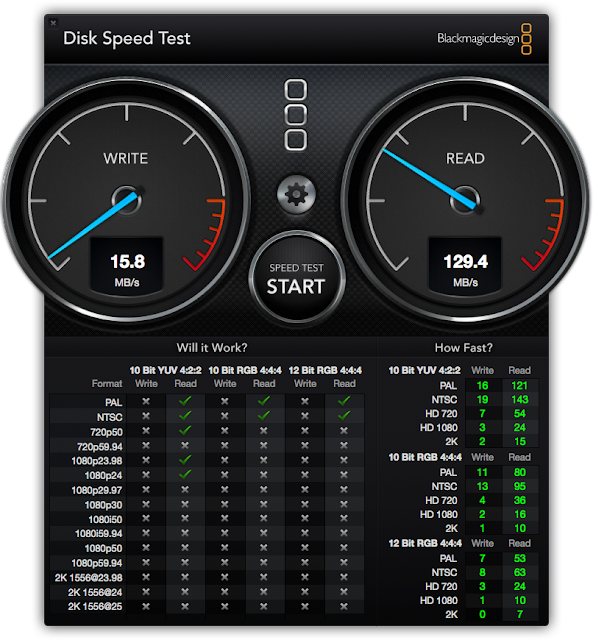 Out of this lot, I would choose two as my current favorites: Supersonic Rage XT and the micro tab. 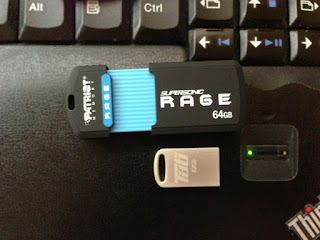 The Rage XT is readily available at my local Frys and online.They are a little bulky but not as big as the Silicon Power. I got myself a 64Gb for $50 after having good results with various 32Gb. I put a full OSX bootable build on one and it was quite good. Booting a full 10.8.3 OS took less than 26 seconds after 6-7 tries. It felt much, much faster than a 5400 rpm drive but there were cases where it lagged and that is due to the limitations of USB BOT (Bulk only transport). For example, clicking on system preference, there is quite a delay before any of the options come up but running Office and Safari was snappy. 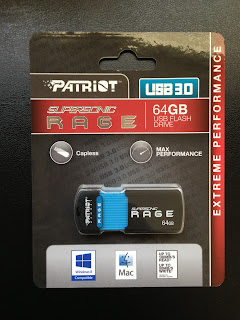 The Patriot Tab reminds me of the popular Sandisk Cruzer drives that takes up little space. It is so small, you can almost permanently leave them attached to your notebook.
Sure, the write speeds are pretty low at 10 MB/sec but for my uses, they work fine. I would use it to rsync small text files in the background. It is fast it where it counts (restoring files). At $30, they're pretty cheap. If you are looking to expand the storage of your limited ultra book, you can look into these or stick to using a flushed mounted sdcard which is the popular thing to do now. 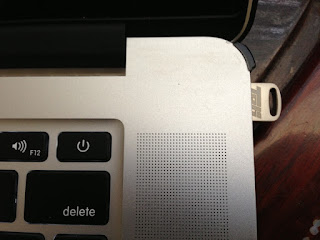 So USB 3.0 sticks have stepped up the game. However, they're still no match for 2.5" enclosed SSDs if speed is what you are after.

I also like the fact they are low-powered draw. Connect a few of them to a USB hub and you can build yourself a USB RAID array! 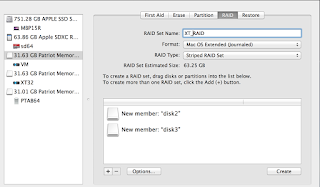 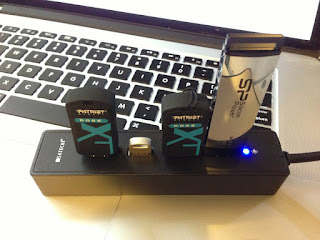 So there you have it. Some of my thoughts on the various sticks on the market. This is in no way a professional review or endorsement of any of these products. USB 3.0 sticks are improving quite a bit now. We are seeing larger capacity sticks and price dropping. I simply wish for something as fast as a SSD in this form factor.

Some Links for USB sticks mentioned in this post: