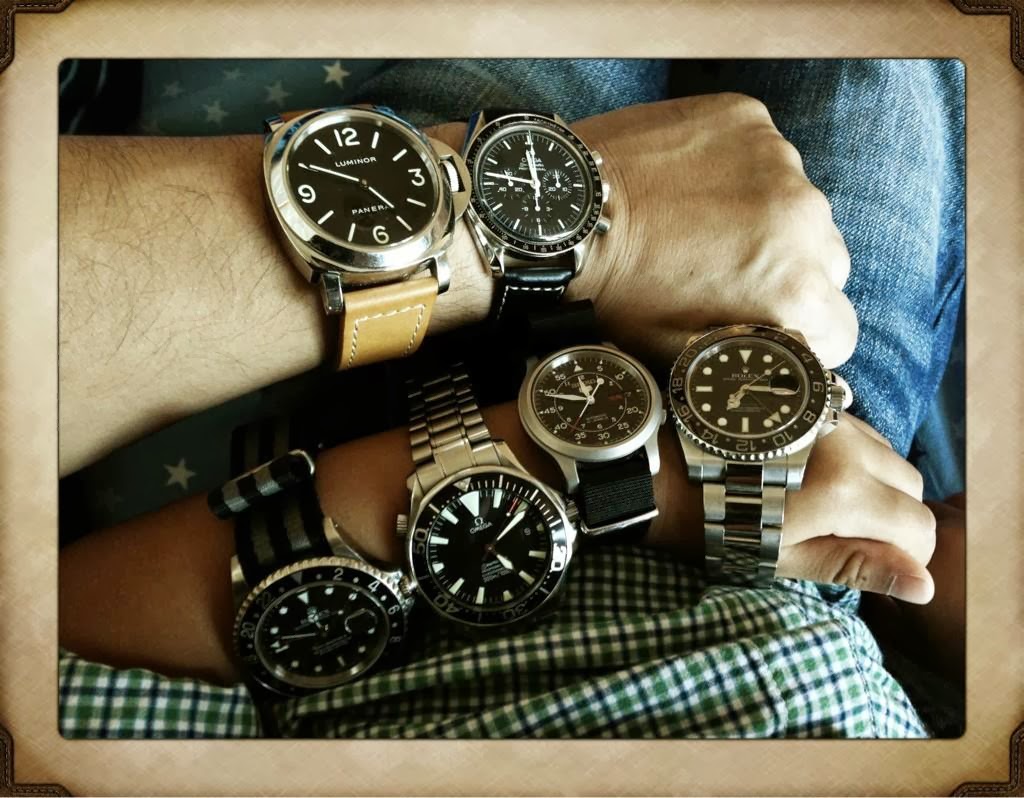 This is a topic that simply cannot die. For over 25 years, I've been known as the "watch guy" in my circles. Yeah, I'm the guy with the fetish for expensive Swiss mechanical watches. So obviously, everyone comes to me for my watch opinions. With the introduction of the Motorola 360 and the anticipation of the Apple iWatch, more and more people are coming to me for my advice and opinion.

Well, lets do this one more time.

Will I buy one?

No, I won't buy something to replace my Swiss watches. I will not buy a Smartwatch. However, I am open to a fitness band. I will buy something that can be worn on my right wrist; reserving my left arm for watches. I'm in my forties and health is a big deal to me. I have friends dying right and left. I do have medical and health issues so a compelling health sensor would make me buy a wearable. 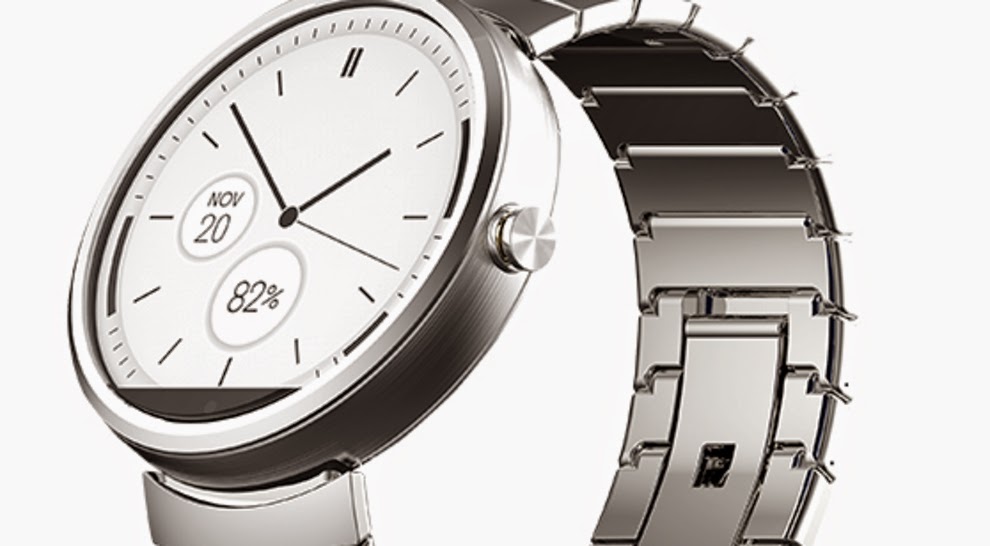 It is an ugly watch and that is my opinion. I'm not into the flat tire design (where the bottom is cut-off). That is my biggest complaint. However, taste is entirely subjective. It also looks to much like it is trying too hard to be an ultra-thin museum piece when it isn't. It is girthy. I also looks like a cheap "Mall fashion watch" in the theme of Movado and Rado. Those are quartz watches I don't like except those are ultrathin and quartz makes sense. The 360 is so big, you can fit literally a pocket watch movement in it like the Unitas 697. In short, it looks like a girly fashion watch yet at the same time, it is monstrously big.

I prefer the LG G R watch. The thicker bezel doesn't bother me on the LG because if you look at any Swiss watch I have, they all have bezels. They also all have traditional lugs to swap straps. Here is the LG R watch. It looks like a fashion watch too but it is more pleasant in my eyes. I read that people don't like the thick bezel nor the lugs. Obviously,  those people prefer the minimalist, cleaner 360. 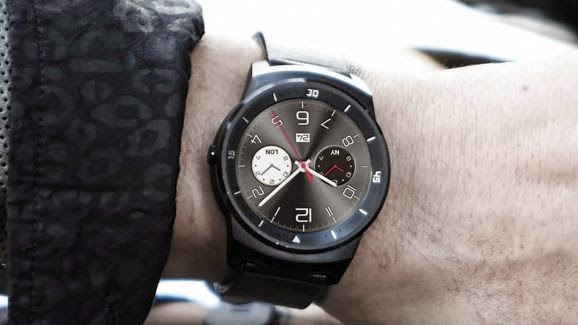 That is just my opinion on looks.

Most importantly, I think the 46mm size of the Moto360 is way too big. Monstrously big for what it is. Arstechnica did a comparison (http://arstechnica.com/gadgets/2014/09/moto-360-review-beautiful-outside-ugly-inside/) and their comparison is a bit off and let me explain.

36mm is a women's size. Small Men's size are 38mm like the Datejust and Explorer. 42mm is a slight creep from the average large men's watch.

Now for some context.
40mm is large. It has been considered large for over 50 years; notably with watches like the Rolex Submariner, GMT Master. Those are manly watches. Here is Charlize Theron wearing a 40mm Rolex. It is a large watch. 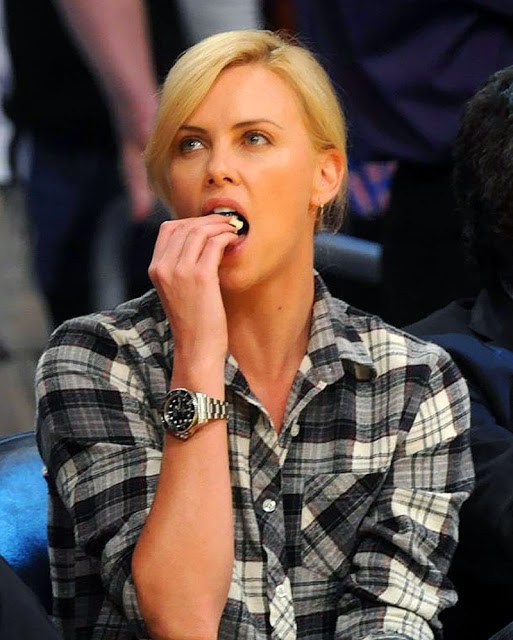 Most of my watches are 40mm and I'm comfortable with that. 40mm with 20mm strap width is the perfect Men's large watch size. A good majority of the historical iconic classics fit in that dimension. Here is what most Alpha males historically worn. 40mm.

Here you have Che with a Submariner, Apollo 13 Jack Swiggert with his GMT Master, and various James Bond with their 40mm Submariners. 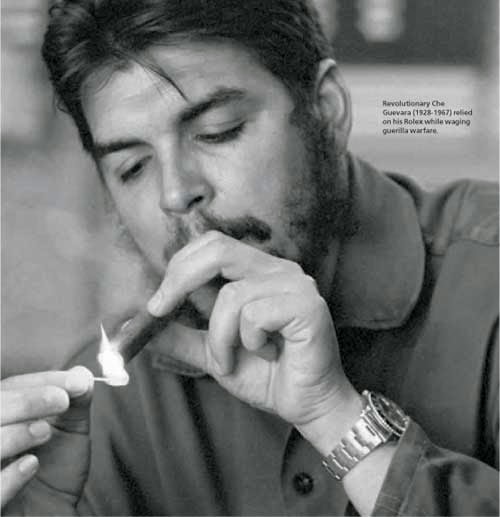 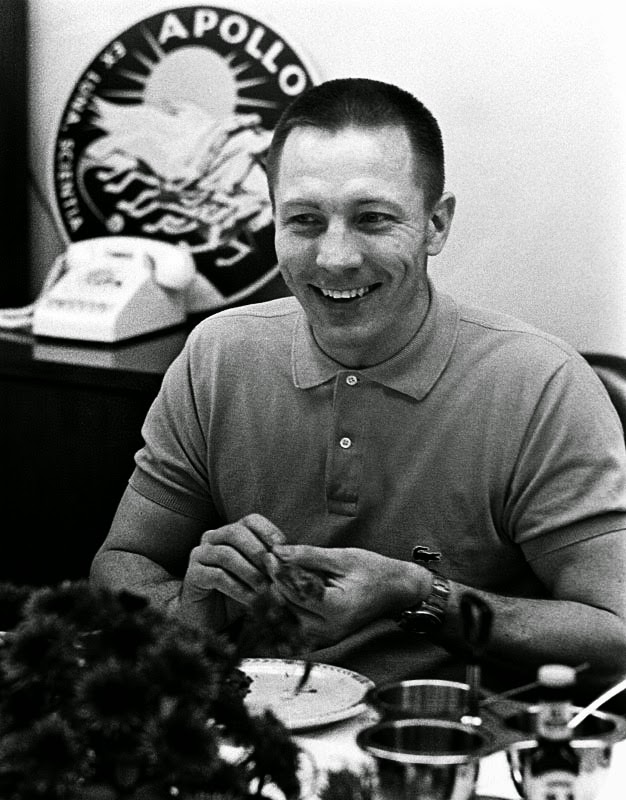 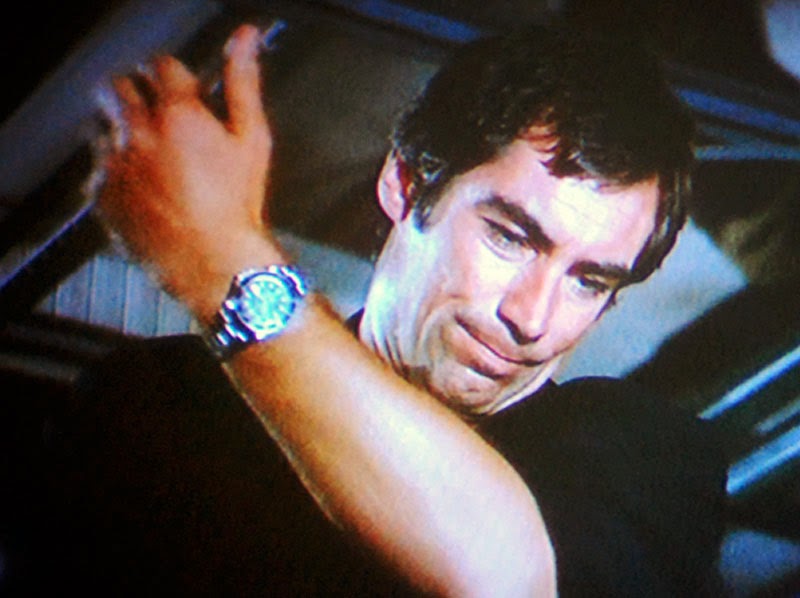 In short, your masculinity was never at question with 40mm. Every cool male figures in my life wore 38 to 40mm. 38mm was considered to be on the dressy side and 40mm was the casual, sporty side. All the Hollywood actors, test pilots (Chuck Yeager), NASA astronauts, explorers wore 40mm. Even the high end tactical secret forces of the her Royal Navy special ops wore 40mm. It was a successful recipe for Rolex for over 60 years. It was the optimal size.

Here is a comparison to a Rolex 40mm. See why I call it comically big? 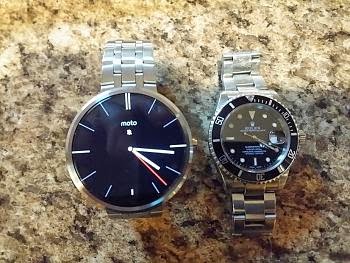 Then around the mid 1990s, Panerai broke the mold and introduced the 44mm Panerais. Hollywood macho celebrities like Schwarzenegger, Stallone, Statham, and many leading men started to wear Panerais because they were over-size and blingy without the negative Rolex stigma. Pictured below is a 44mm Panerai. 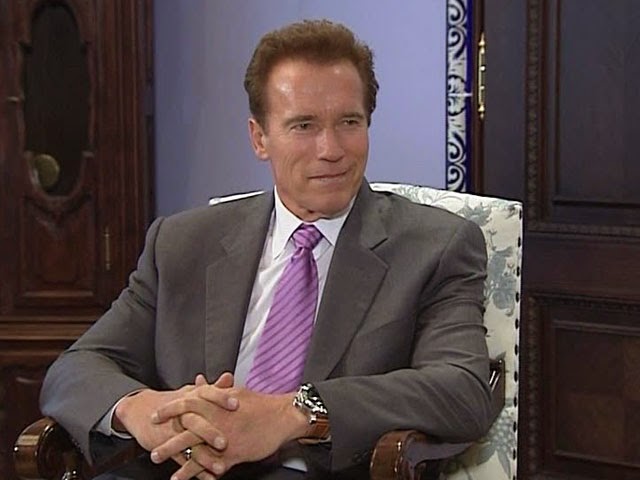 Now, there are some outliers. Panerai does make some models in 47mm. 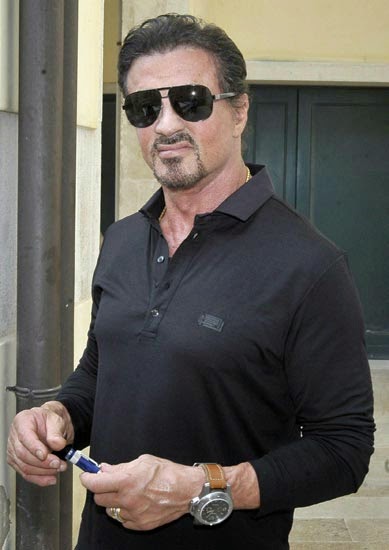 Obliviously, you can tell it is an outlier size. Some say you need the persona and physical stature to pull that off. The Moto 360 is not that far off the mark at 46mm. Except, a 44-47mm Panerai looks really masculine and macho. A Moto 360 still looks nerdy. In short, the entire cast of the Expendables wear 42-47mm watches. Compare an A-List Hollywood action star to your typical nerd geek who will be wearing a smart watch that are both similar in size. This pretty much eliminates a large percentage of the population; women.

Outlier size won't appeal to many. I wear a 44mm Panerai on occasion and I can feel the heft and that watch is the most banged up watch I have. I'm always accidentally banging that watch on doors,tables,etc. Other Panerai owners feel the same.

Omega and Rolex started to supersize to 42-43mm as well. With this over-size watch craze, some of the younger generation think 40mm is no longer large but regular size. There is a very tangible big difference every mm you grow on in size on a watch. The perception is much more so than the weight.

Like I wrote earlier, I'm into Swiss mechanical watches. None of my watches need batteries. They are infinitely powered. The whole idea of 1 to 2 day battery life is alien to me. I'd go bat-crazy. I remember a few times where I was hospitalized for 2 days and all my electronic gadgets died on me - iPad, laptop, smartphones. The only thing keeping me sane was my watch. I've been on travelling expeditions (buses, trains) in 3rd world countries for days. No smartwatch would obviously work in that scenario.

They need to obviously work on the battery life.


What would I buy if I did?
It is hard to say. I may get one for novelty purposes but nothing is going to replace my Panerai, Rolex, Omega or whatever I have.

The idea of a square case doesn't bother me. It doesn't have to be circular as I'm not looking for a watch. I prefer long battery life. But I've seen decent square watch cases like JLC and the Heuer Monaco. 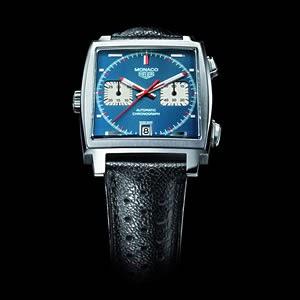 But as I noted, I'm not looking for a watch per se. I'm open to a fitness band tracker I can wear on my right wrist.

I would go for something like this. Yes, I know some of you guys will think of it as a girly bracelet but I don't have those hang-ups. I'm wearing some 40-44mm beefy Swiss tool watch on my left wrist so I don't care. 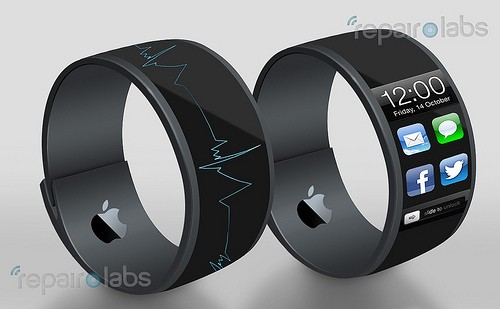 Now, the thing that would make me instantly buy something like this are:

1. Battery embedded in the bracelet. This would compensate for the short battery life that is causing problems for many of the OEMs. If the whole bracelet was an extended battery and if it gets 4 days of use, I'm sold. But I would only buy something like this on the premise of it being a fitness, health sensor band. If it is mainly a watch, I'd have to consider my techy gadget curiosity over my horological passions.

2. Some extended phone calling capabilities without the need to tether a phone. If Apple was able to convince Phone carriers to allow multi-shared SIM plans, that could be a big. The idea is with two SIMs, you can share the same phone number and capabilities on your phone and wearable. So if the phone is in your car while at the gym, you can make calls with just your wearable. This would be an instant buy for me. However, I doubt this would ever happen.

Will Apple kill the Swiss industry.

I see this question come up a lot. Answer. No. That is a big pipe dream. Rolex is a 8 billion dollar company with 4.5b in annual sales. They generate over 800,000 Chronometers. Their average watch sales for $8,000. SWATCH group, LVMH, Richemont are equally big. Boutiques like Patek and Lange Sohne will never be effected just as Ferrari will never be effected by Toyota. The comparisons and analogies to Blackberry/Nokia are so way off the mark. We are talking about luxury goods here. A different dynamic. I know people who drop $25,000 on a Panerai and a $250 smartwatch isn't going to sway their opinion. People buy engagement and wedding gifts that are suppose to last and be used for decades.

There are a million reasons why the whole idea is nonsense. No one is going to replace their high end watches. Smart watches will be disruptive. Sure. It will effect the market under $1,000. Possibly even encroach in the $1,500 range. Casio, Garmin, and many of the fitness trackers will be effected. Some of the mall fashion brands will be hurt - Coach, Armani, Gucci, and Movado. But that is about it.

But high end Swiss mechanical? No.  I buy watches because I like mechanical miniaturization. There is simply no comparison to something made from electronics with something made from hundreds of mechanized parts. Watches also appreciate in value over time. I buy them as life-long companions. I have some watches I bought new that are over 25 years old. They don't have the 2 year replacement/update cycle. I can hand down my watches to my kids so it is a generational thing. Craft. There are a million other reasons why Swiss watch buyers won't give in. It is mostly emotional and no form technical rationalization is going to change that. I have friends and family who are heavily tech and gadget oriented. Those with Swiss watches share my similar opinion. Nothing is going to replace their Rolex and Panerais.

Some guys save up years to buy their Omega Speedmaster because they were in awe with NASA. Some get Rolex Submariners because they remember their cool uncle or dad, or perhaps, James Bond. These are longings that many have as a kid until they grow up. No one is going to long for a disposable gadget. My son, who is six, really wants my Omega Seamaster and Speedmaster Professional. He's been stuck on those two watches since he was three. He also know they're special by observing how much care I take after them. An electronic gadget doesn't have those appeal.

I've been called an old fart for this Luddite reasoning and I'm OK with that. It is the same feeling art lovers will never replace an Rothko with some Adobe Illustrater drawing.

In closing, these are my thoughts for the time being.

Update: With the Apple Watch announced, here are my thoughts on another post.
http://fortysomethinggeek.blogspot.com/2014/09/apple-watch-casual-observation.html

Posted by fortysomethinggeek at 9:10 AM