I finally made the switch to Ubuntu 12.04 from 10.0.4 on my personal machines. As for my professional needs, I am still using CentOS. For the past year, I avoided upgrading Ubuntu since they switched to Unity (aka Netbook Remix version 3).

However, as many of Linux users with a Galaxy Nexus know, MTP (Multimedia Transfer Protocol) does not play nice with Linux. In short, I can't connect my phone and transfer files from my Linux box.
ICS (Ice Cream Sandwich) MTP usb access was one of the rumored things about 12.04. This and this alone was the reason for me to cast my doubts on the new release of Ubuntu. So, I took the plunge and updated a few machines to 12.04.

Well, that didn't turn out to good either. You still have to muck around with Fuse, MTPFS, and play around with fstab entries. Not my idea of intuitive or fun. The MTP issue extends to other devices like the new Galaxy Tab 2. Don't get me wrong, I could 3 out 20 times get my phone to mount and maybe 1 out of 30 times have a non dropped connection during copies.

There were also rumours of exFAT support for cross-platform filesystem sharing. Again, that didn't turn out to be true either.

Still, I made the plunge and changed. I'm still not a fan of Unity so I run Ubuntu in classic GNOME mode.

Besides running classic GNOME, there are few things that are cool.  There is reliable CISCO ipsec and openvpn support. I no longer get dropped connections and could reliably be connected for 12 plus hours.

Another surprising thing for me was better iOS support. Even with iOS 5.1, Ubuntu 12.04 is able to allow me to mount and copy files to an iPad. I can copy movies and spreadsheets into my iPad 3 via drag-n-drop. Again, very surprising that Ubuntu has better iOS support than Ice Cream Sandwich. You figure that Android is Linux, it should play nice with other Linux devices.

Screen grabs are proof enough below. 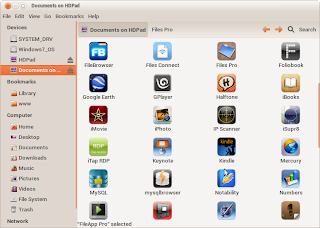 Copying pdfs  is 10 times easier  to the iPad than to my Samsung Galaxy devices. 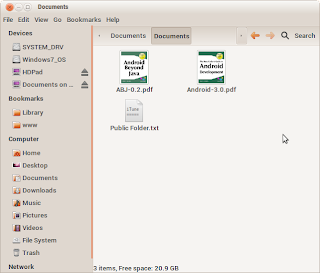 As you can see here, MTP File access is still problematic. In 2012, people shouldn't have to terminal detect USB devices, write fstab entries and manually mount devices in the console. 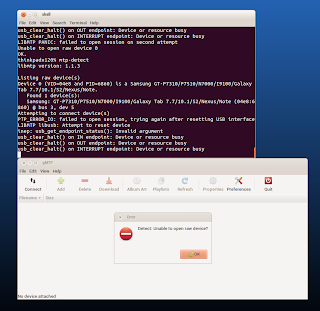 Other things I like are:
Airprint built in. I can print from my iPad using the UBUNTU as a host print Airprint server. This is default in the CUPS setup.

I dig the wanna-be OSX Time Machine style backup. I like the fact I can SFTP into a remote server and it backs up my files 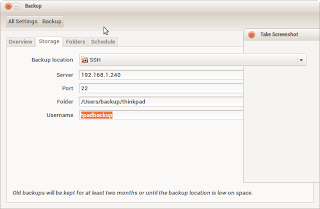 Now, there are some problems that I haven't been able to sort out yet.  I was not able to install 12.04 of some older Dell PowerEdge 2850/2950 rack servers. I'm not alone.  Fellow co-wokers could not get it to install. I did not find a JEOS or shell only install options. The CD/USB took me straight to live session. I suppose there may be some special keyboard shortcut at boot or somethng else trivial but I never pursued it. 10.04 LTS will stick on my servers along with CentOS for the time being.

Overall, I am pleasantly surprise and not quite ready to write-off Ubuntu.

Posted by fortysomethinggeek at 12:45 PM