The SansDigital TowerRaid TR4UTBPN is a 4 bay RAID enclosure with eSATA and USB 3.0 interfaces. It was recently on sale so I picked one up. 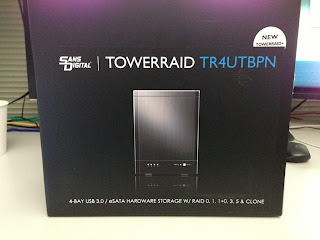 I've had this sitting around for a few weeks and I've finally freed up some time to play with it. 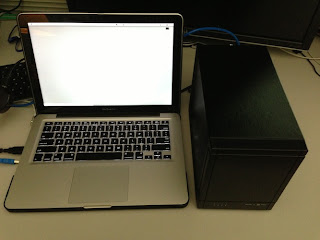 SanDigital makes over a dozen different enclosures and it can easily get confusing which one to get.
You may have seen some on sale combined with eSATA cards. Take note, many are simply JBOD (Just a bunch of disk) enclosure box that require an eSATA port with port multipliers to function.  Otherwise, you only see the first disk. Hence, the reason many come with eSATA card bundles.  Port multiplication is not common on many eSATA interfaces; including most laptops and motherboards. Those cards often require some sort of software to run them in RAID.
So it is very critical you are aware of the difference when you shop for these type of enclosures.


The box is rather tiny and minimal to accommodate 4 drives. They drives do not use a tray but do require you to fasten them down with screws. 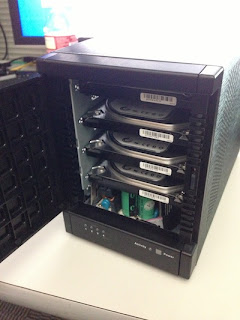 The back takes a standard prong power plug (power supply is internal). There are two interfaces - eSATA and full size USB 3.0. There is also a dial and reset button to set the RAID modes. The front side has some little ventilation but I would prefer that the front door provided better airflow. 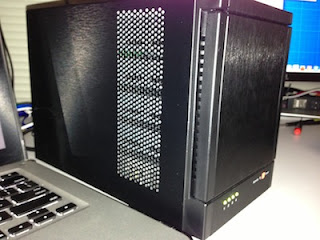 Setting the RAID mode is a straightforward affair. You simply turn the dial to the mode you want. You can also overcome the dial settings through the RAID manager application. 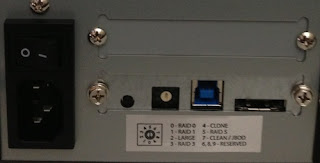 Front indicator shows activity and which drives are failing. In this case, the 3rd drive has gone bad.

The Raid Manager app shows you status and has other options to create and delete new RAID sets. 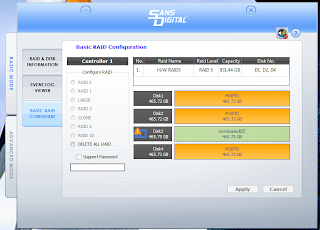 The application also provides diagnostic and notifications controls. I've read that the email settings may have some problems with SMTP servers using START/TLS authentication. I did not test to find out. Unfortunately, I could only get the Windows version to run. The Mac app didn't appear to work for me. This may be a Mountain Lion compatibility issue. 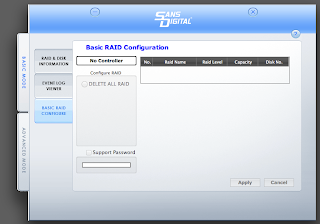 Forget about it. USB 3.0 simply didn't work for me. I've read this complaint on various customer reviews and it appears the JMicron controller has some incompatibility issues with other controllers. I've tried on 4 different machines under OSX, Linux and Windows 7. All had problems with disconnects or simply not mounting. Under OSX, it would disconnect under heavy load or large file transfers. Under windows and Linux, it would randomly disconnect and reconnect every few seconds.  Windows 7 would prompt me to format the unit every 5 seconds.

There may be a firmware update and I'll look into it and update this post later. For now, I would not recommend this as a USB 3.0 RAID enclosure. I've been reading other brands and make have similar problems.Customer reviews on Newegg and Amazon corroborates similar experiences. However, under USB 2.0, I didn't notice any problems.

Unlike most of the customer reviews I've been reading, I've been getting the 200 MB/sec sequential read transfers in various testing when using eSATA. The drives I used were 500GB 7200 rpm Seagates. 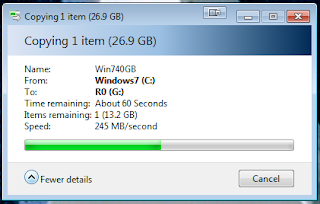 I only tested RAID 0 and RAID 5 but I did not see much of a performance loss going to RAID 5. The 4k/512k was about 1/4 slower  in writes but the sequential read/writes were similar to RAID 0. In short,  copying large files saw little loss while your random files will be faster under RAID 0 as it should be. 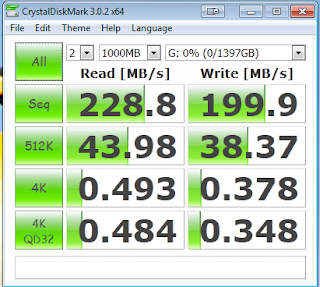 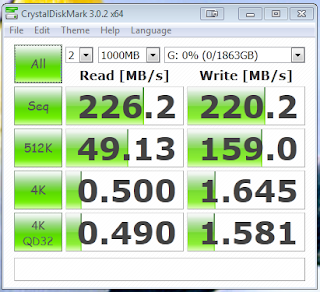 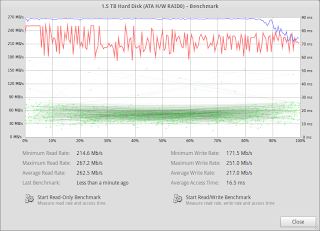 This box is cheap enough to get if you are using it with eSATA. I would not recommend for USB 3.0 use.

If you are a laptop user without eSATA, I recommend using a USB 3.0 eSATA adapter like this NewerTech one I reviewed earlier.


Posted by fortysomethinggeek at 9:40 AM