A few months ago, I reviewed the portable Seagate Go-Flex Thunderbolt adaper, the STAE121. Today, I am going to give a short review of the desktop version designed for the Backup Plus Desktop external drives from Seagate. The model is STAE129. 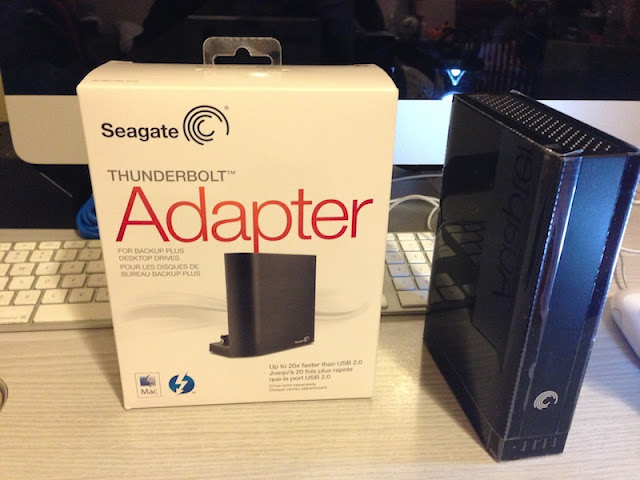 This dock/adapter is designed specifically for the Seagate external Backup Plus drives. I have about a dozen or so of these USB2/USB 3.0 drives in 3TB and 4TB configurations. They contained 7200 rpm Barracuda XT drives that are often way cheaper than buying internal versions. If you shop carefully, 3TB can be had for $100-120 whereas the 4TB can go for $150-180. I pretty much stock up when they go on sale.

The STAE129 is a pricey affair at $150 without thunderbolt cables (you can get cheap ones here).  Since I had a shelf full of these external Seagate drives, I figure, why not. I'll give this a spin. More importantly, my 2012 27" iMac does not have USB 3.0.  So this review will be based off a 27" Thunderbolt model iMac along with a brand new freshly HFS+ formatted 4TB Seagate drive. I will also compare USB 3.0 from my Macbook. 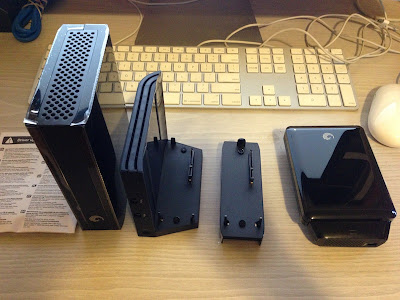 You can use the dock with 3.5" bare drives if you are creative. However, I wouldn't recommend it. 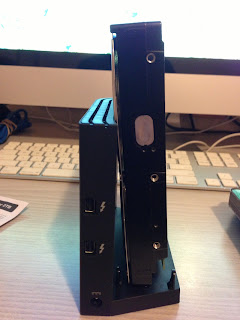 Someone should make a 3.5" sliding cradle so you can use standard drives. 2.5" SSDs work fine (as I will show later). The power supply interchanges with the USB 3.0 base.

The main issue I have with the dock is the flimsy plastic pins that connect to the Backup Plus enclosures. They make a worrisome snapping sound when you dislodge the enclosures.
I was hoping to freely move my enclosures from USB 3 to Thunderbolt but I have to be extremely careful removing enclosures. There is a great likelihood you can easily snap them off. 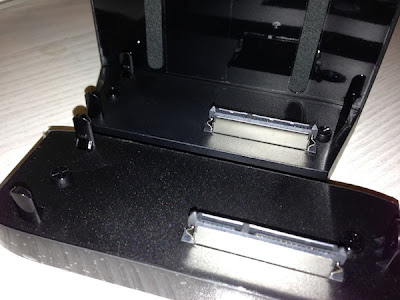 After a few tries, it was best to gently dislodge from the front first. 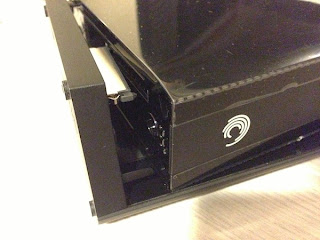 Unlike the STAE121/128, the Desktop Thunderbolt adapter comes with two Thunderbolt ports for daisy chaining. Here I have 3 Thunderbolt daisy chained: Drobo 5D, STAE129, and the portable STAE121 at the end. 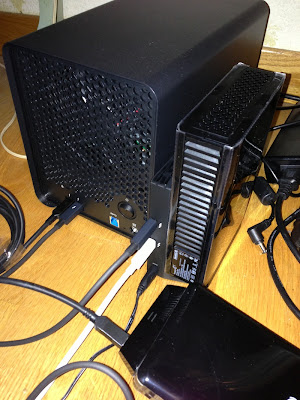 Installation:
In order to use this drive, you need to install some drivers for both Mac and Windows. There is a USB stick supplied in the packaging. I opted to download the latest ones from Seagate's website.

The driver is only needed on the Mac if you wish to use 2TB with Thunderbolt which was the case with me. If you have data on an existing drive, I suggest you back it up. The Thunderbolt enclosure prompted me to re-format the drive before using.

So how does it perform? Well that depends on what you are using it with. If you are planning to use 2.5" SSDs, you are simply better off using the portable 2.5" Adapter. I tried a Samsung 830 SSD on both and the speeds were comparable. 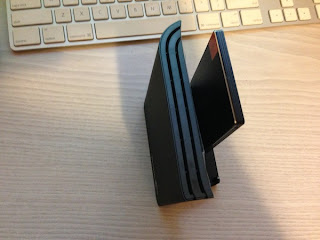 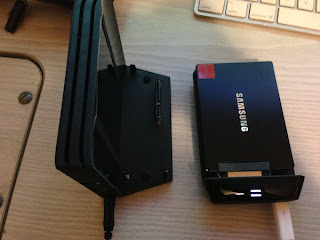 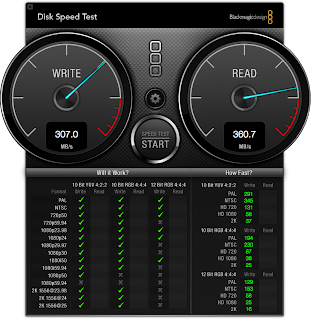 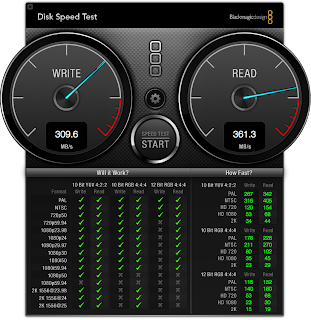 So for SSDs, just save your save the cash and buy the STAE121/128 portable Thunderbolt Adapters.

Now, if you are like me and have a bunch of external Backup Plus drives, this is the adapter to get. And the point of this review is to see how it would perform in the most typical scenario - using the 7200 rpm HDD external enclosures. 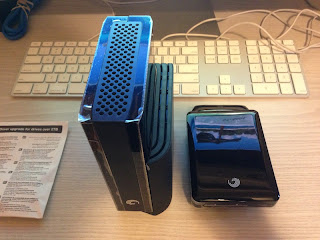 With the 4TB Desktop enclosure, I was getting 177/176 MB/sec Write and Reads as shown below. 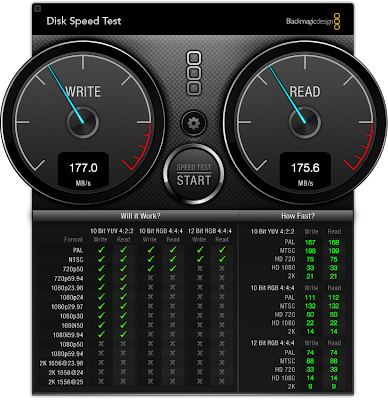 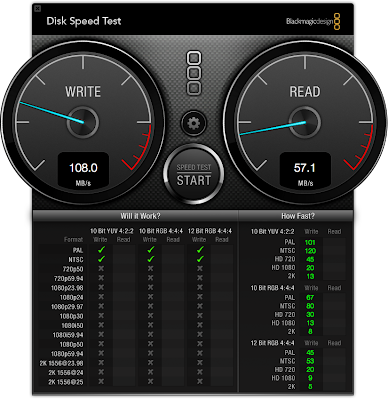 I thought the benchmarking off the boot drive with a full OS may have caused some slowdowns. But that is not really the case as I cloned the internal drive onto the Thunderbolt drive and booted off the external Thunderbolt. 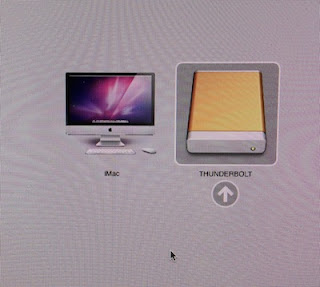 As you can see below, a full Mountain Lion clone install and boot did little to impact the performance of the 4TB Thunderbolt drive.In fact, booting and running off the drive via Thunderbolt was a pleasure. I clocked the boot time from fresh power to login screen at 29 seconds. That is not bad for a 7200 rpm HDD drive. 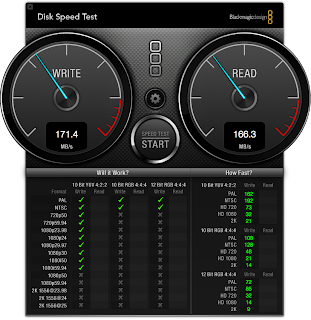 As you can see from the screenshots below, the first one shows the internal drive running at 3 Gigabit versus the Thunderbolt running at a full SATA III 6 Gigabit.

So it seems the Thunderbolt controller is running at full optimal speed. I was worried it might be a handicap device running at SATA I or II. This isn't the case with Seagate.

So how does it compare to USB 3.0? As I mentioned earlier, one of the incentive for me to get this was the fact my 27" iMac does not have USB 3.0. However, my newer Macbook does have USB 3.0. 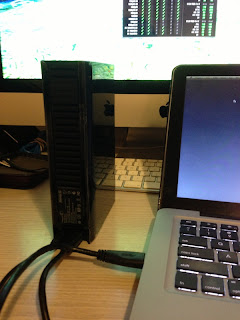 Running Blackmagic off my Macbook, the USB 3.0 posts some good numbers. It is slightly slower than the Thunderbolt adapter. However, I probably attribute it to a slower USB 3.0 controller chipset. 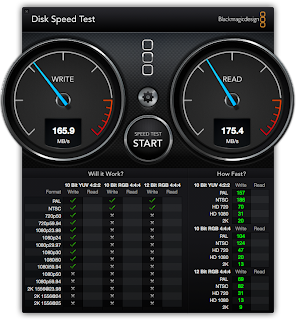 Hence, here lies the dilemma. Thunderbolt with standard platter hard drives are not a compelling sell over standard USB 3.0. The USB 3.0 connector comes free with practically every Backup Plus enclosures.There are advantages to Thunderbolt over USB 3.0. Most notably in smaller I/O operations. Booting off Thunderbolt and copying random files will be faster. In the case of boot time, it was 3X faster at 31 seconds versus 1 minute and 45 seconds for USB 3.0. Small I/O, random 4K seeks will suffer under USB 3.0. But for copying large files, E.G. movie rips and gigabyte files, it is a draw. 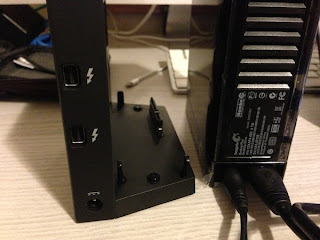 I think this last picture pretty much the reason for any pre-USB 3.0/Ivy Bridge Mac user who has Thunderbolt. 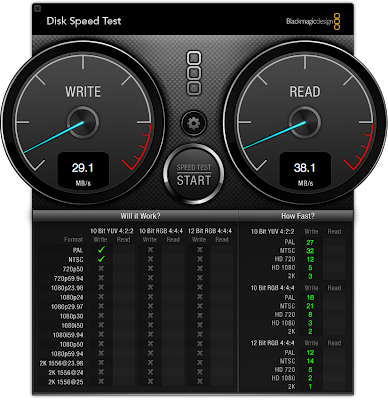 Posted by fortysomethinggeek at 10:15 PM