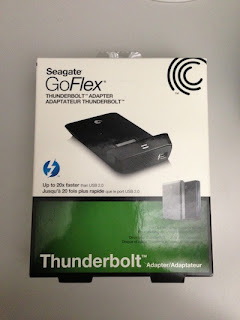 This is another web review of the GoFlex Thunderbolt adapter. Here is a short summary: It is SMOKING FAST.

After accumulating over 7 or so 2.5" Seagate GoFlex drives, I decided to take one of these for a spin.
I love the idea of the GoFlex and I've been happy with mix and matching drives (USB2, USB3, and Firewire 800 connectors).

With 8 SATA6 SSDs lying around, Thunderbolt was the next logical step to take advantage of them. If you've been reading my blog, I've tried everything with my SSDs - enclosing them in eSATA RAID enclosures, chaining up in striped RAID over USB 3.0, and other means of squeezing out the most performance externally. Now, I've given up and have gone Thunderbolt and for good reasons. With an SSD, it is fast (scroll to the bottom).


Go-Flex adapters have SATA on one end and a connector (usually USB) on the other. This one is slightly larger with a bottom base (to house the Thunderbolt electronics). The great thing is that they will also work with any 2.5" standard SATA drives found in laptops and this includes SSDs.

Here it is pictured next to a USB 3.0 Go-Flex adapter. 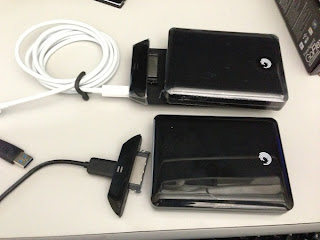 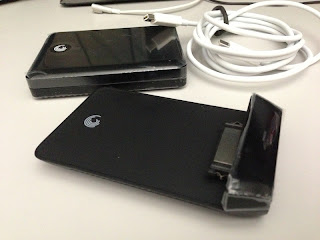 Furthermore, I should note, the expensive Thunderbolt cable is not included and you will need to source one before using this adapter.

As for speed, you won't be terribly impressed with the adapter using  a standard HDD drive. The normal  Go-Flex 1 TB drives run at 5400 rpm so they will perform as fast as a drive connected internally.

First of all, with the standard a standard 1TB Go-Flex drives, I was getting some 80MB/s read and write using BlackMagic's speed tesk. These aren't that better over a standard connection like USB 3.0. 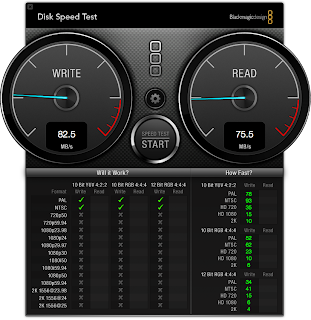 USB 3.0 yielded slightly slower benchmarks that you won't notice too much in real world situations. 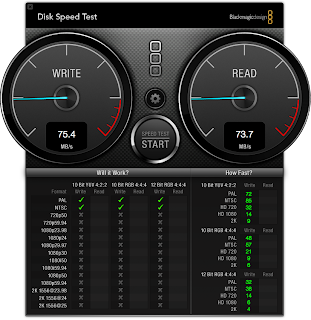 You will need SSDs to see how wonderful Thunderbolt really is. I paired up some Samsung 830 128GB SSDs to both Thunderbolt and USB 3.0 to see how they performed. 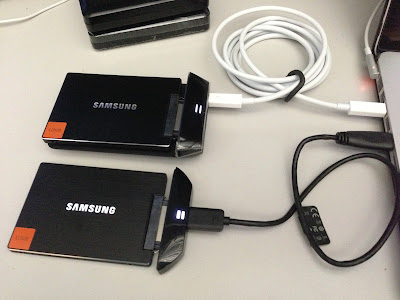 Here are some preliminary results:

Using Thunderbolt, you will see in excess of 300 MB/s reads and writes. 360 MB/s read was normal after several runs. 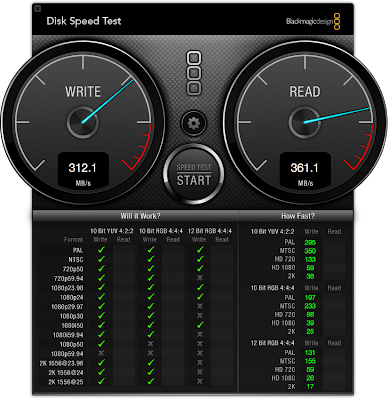 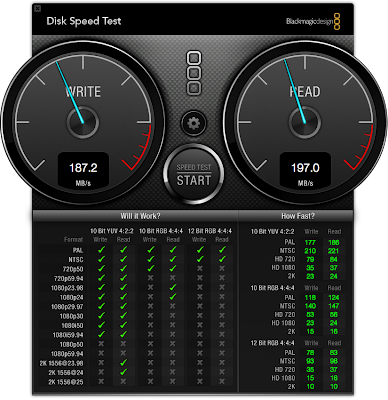 Synthetic benchmarks is one thing. What matter how will it perform in the real world. My typical use case would be  copying large files like virtual machines, system clones, and large media files.

Now lets compare with a standard 7200 rpm drive connected directly to my notebook on the fastest SATA6 bus.

If you are not using SSDs, expect your time to be 10-12 minutes with standard hard drives. 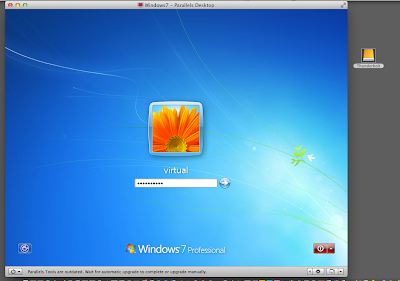 There you have it. Thunderbolt is smoking fast. Thunderbolt vs USB 3.0. There is no contest.
It totally obliterates USB 3.0. More importantly, Thunderbolt now makes external bootable drives a reality. You can safely boot off an external drive with little or no performance penalty. In some cases, the external Thunderbolt boot drive will be faster than the internal drive as it is in the case of my 27' iMac which still uses a regular hard drive.


I will update this blog later as I get two more high performance Thunderbolt drives : LaCie Big 2 and Drobo 5D in the coming days.
Posted by fortysomethinggeek at 9:05 PM