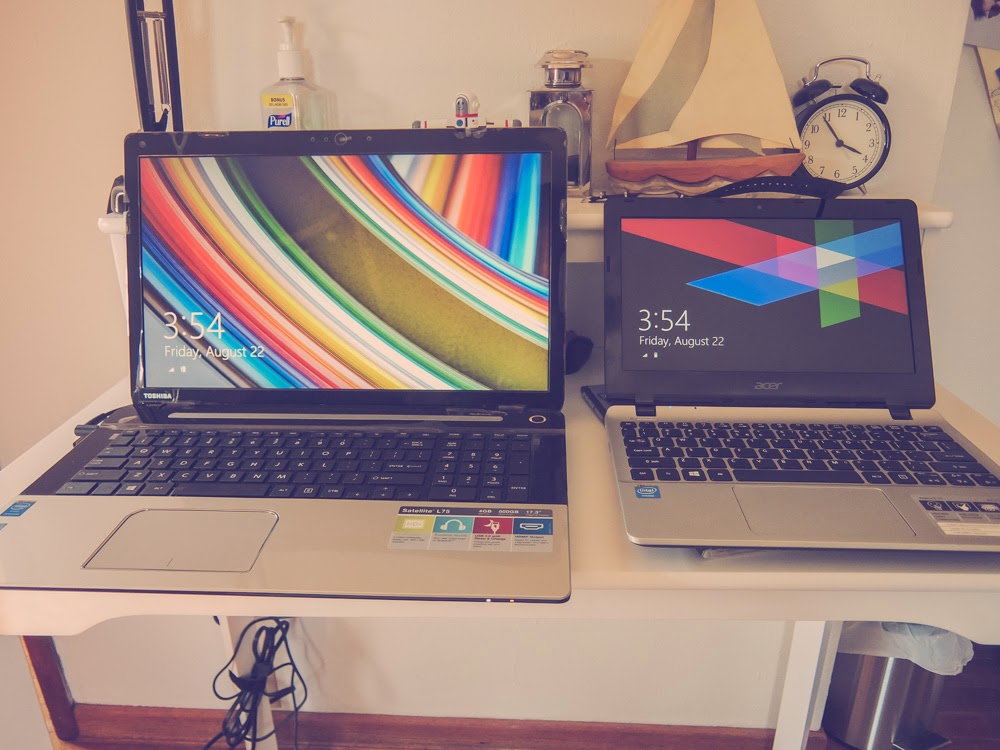 My kid is entering the first grade so I decided to upgrade his computer. His first computer was an Acer C710 Chromebook. It served him well for Preschool and Kindergarten. I think Chromebooks satisfies most needs but the one thing I hated about the C710 Chromebook was the battery life. Thus, I sought out his replacement. I heard great things about the 710 replacement, the C720 but the allure of cheap Windows laptops tempted me. Low and behold, a few of the brick-n-mortart stores are selling ultra cheap Windows 8.1 celeron budget laptops. First, I got him a 17.3" Toshiba laptop. Yes, 17.3" 1600x900 6lb behemoth. It was $250 so why not. Then, Best Buy flashed an 11.6 Acer for $130 so I couldn't resist. I decided to let hime choose what he wanted to keep.

I have to admit, I am actually starting to like it. Specifically, the "Family Safety Controls." It works like in OSX but I like the one cool feature is that it sends you a weekly summary. Unlike the mac, the administration is in the cloud. Hence, Microsoft's ability to send you a notification. Here is an email I got for his first week. 2.5" of Netflix. Hmmmm. 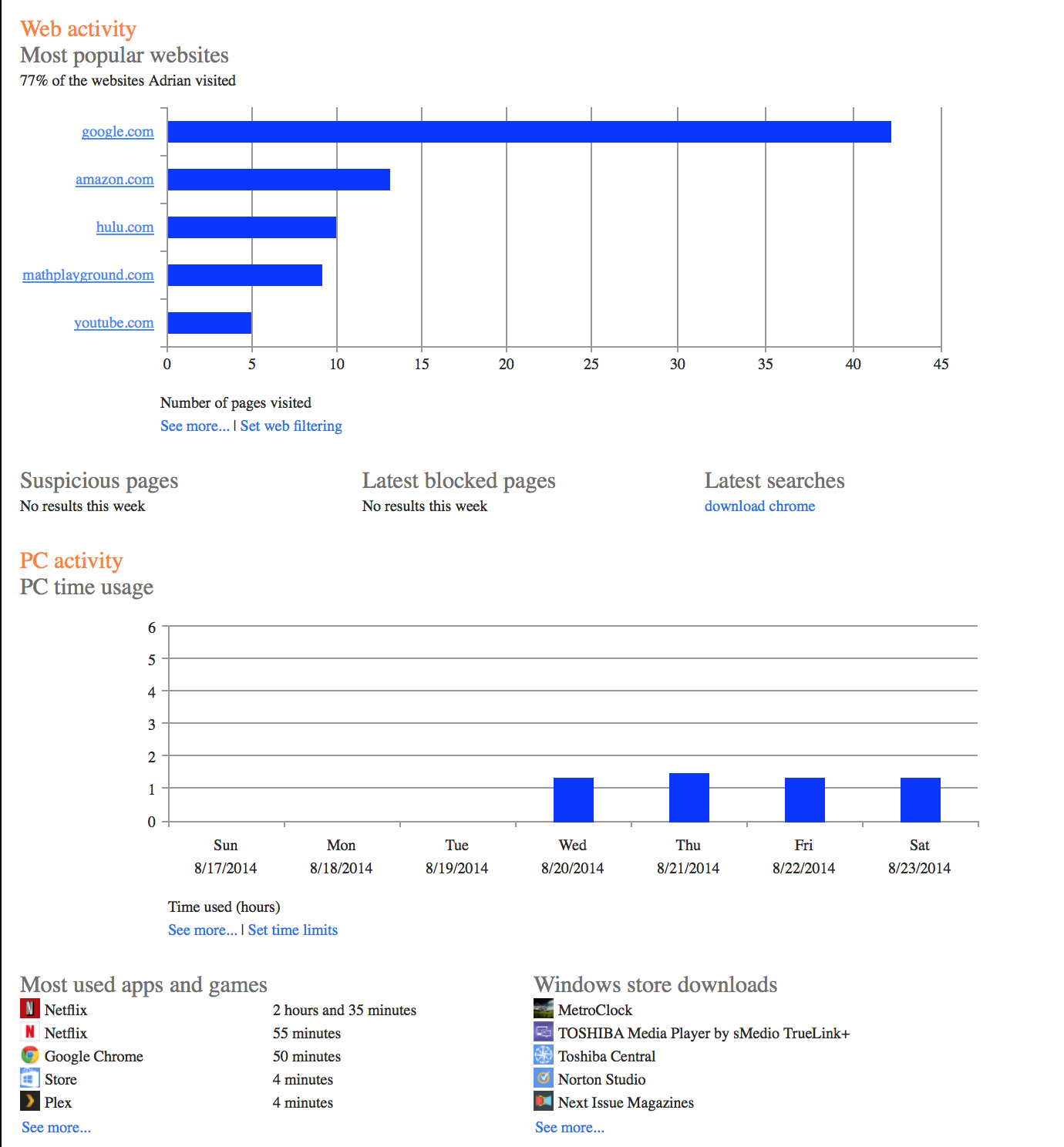 In my household, all the computers are running some sort POSIX operating system. I run Mac OSX, the appliances and servers run Linux. When my wife gets a new computer, we usually wipe off Windows and install Ubuntu for her. It is just a matter of preference. However, this time, we figure we'd give Windows a shot.  I installed CygWin so I can get work done but that will be another blog post. Overall, it is a bit of a change. I'm not a fan of the disjointed, incoherent, inconsistent Modern UI but I like some of the things Microsoft is doing. The ability to restore profile app settings from one machine to a new machine from the cloud is cool. This is how Chrome OS works and it is really convenient to provision a "Metro" Modern UI environment in minutes. I still have to re-install desktop applications but the ability to get Microsoft Store Apps to automatically install at set-up is a plus.

I do have some major criticisms of the operating system but I won't discuss them here.

Both computers are fairly slow.  Neither of these are touch-screen so they don't benefit from Windows 8.1 Metro environment. Obviously, they're bargain basement, low-end department store specials. It is a shame actually, the performance is what 90% of the consumers who buy these will get accustomed to. Are they pathetically slow? Yes. Chrome OS on older, slower hardware runs rings around these machines. In fact, it is quite frustrating on two levels: Slow 5400 rpm hard drives and bloatware. Since I have a lot of spare SSDs lying around, both computers got the upgrades.

However, Windows is still a pig. It literally took me half an hour to unzip a 110MB zip file on the Acer. I was about ready to throw it out the window when the same zip file took 5 seconds on my Macs. The problem? Background virus scanning. I'm pretty certain McAfee anti-virus was analyzing all my file I/O such as unzipping files. The bloatware is pretty atrocious. Most application install took 20-40 minutes when they should have been done in 2-3 minutes. Moving to SSDs really helped.

Cloning the drives to SSDs was pretty trivial. 15minute affair to clone an existing drive through USB 3.0. Upgraded to SSDs, it makes a major difference in computing experience. However, the reality is, you won't be getting a 120-256GB SSD budget laptops for under $300. I'm lucky to have enough spare drives lying around to make it palatable. For others, I can see how some of these Walmart, Staples, Office Depot specials can be infuriating and painful. 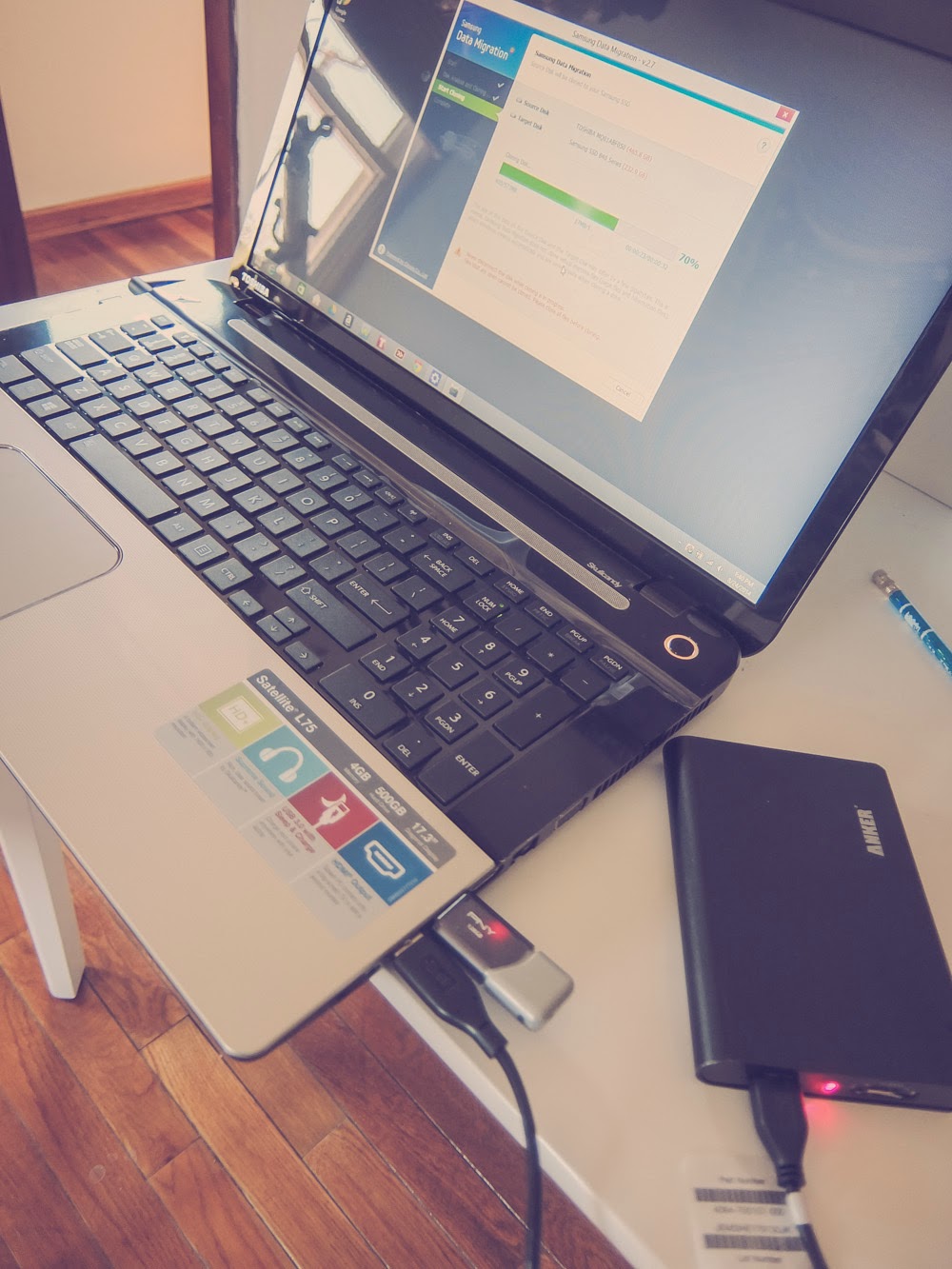 The only unexpected thing was both machines come with 2.4 GHZ only Wi-Fi. I couldn't see my 5GHZ channels. For comparison, my son's 2 year old Acer Chromebook has 5ghz and it definitely runs snappier than both. I'm surprised manufactures are still pushing 2.4 GHZ Wi-Fi. 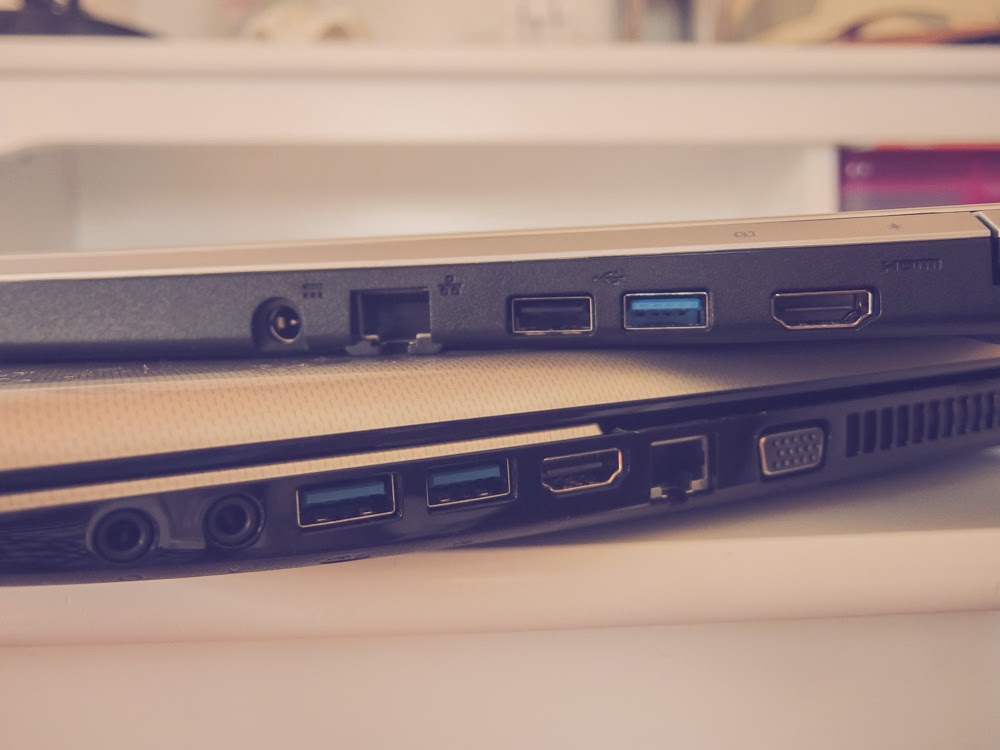 However, I like the fact that both have Gigabit Ethernet, USB 3.0 and HDMI. Worst case scenario, these can be inexpensive NAS servers running FreeBSD or Linux.

Bottom line, they're cheap. They're cheap enough where if my six year old breaks them, I won't worry so much. They're absolutely fine for their intended price points. I'm not complaining nor do I expected them to be comparable to my $1500,$3000 laptops. 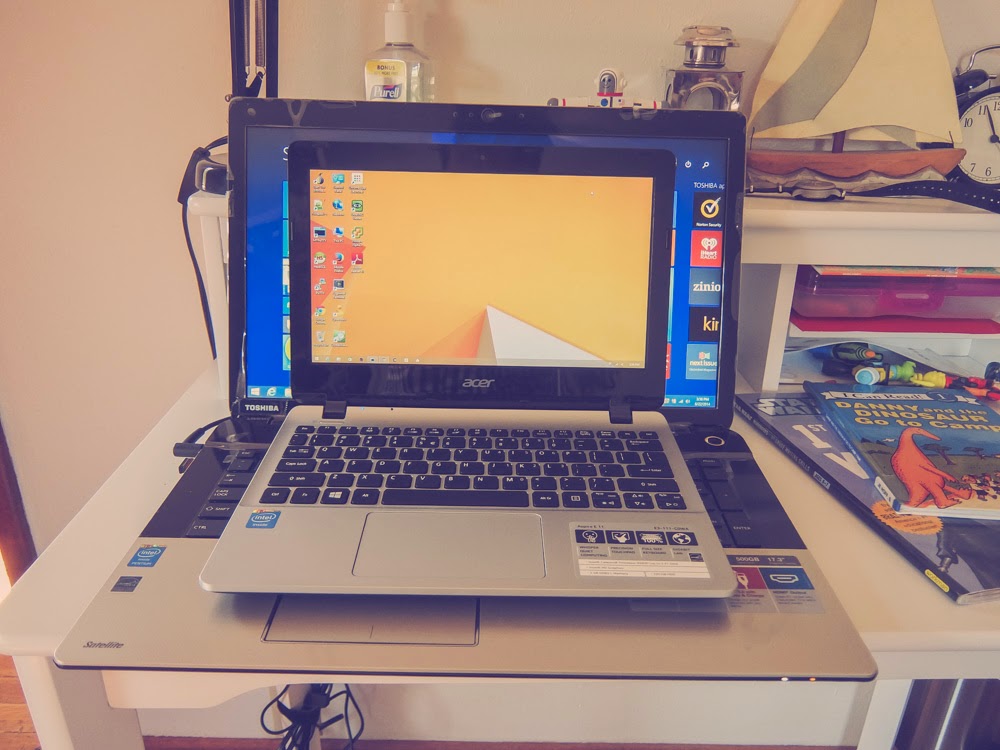 I really like this small laptop. It is a fanless design with a puny Celeron N2830 CPU. This won't win any benchmark contest. I think an Apple iPad Air would out-run this machine. It is about as fast as a 5 year old Core 2 Duo. However, I like the low thermal heat dissipation. The CPU runs at 7.5 watts. I got up to 8 hours of run-time on an SSD (despite the 5 hour stated specs). Unfortunately, it only has 2GB RAM but that is all you really need for a light web browsing laptop. Internet Explorer runs well and INTEL did a good job with the CPU design.  It plays 1080p MKVs and M4V videos over my network with no issues. Thus, this is really a simple web browsing, media consumption laptop. I would not run more than 2 applications at a time on this due to the 2GB RAM. Hard drive and RAM is upgradeable which is becoming very rare in this form factor. The built in Gigabit is a big plus.


Unfortunately, my first grader doesn't like it because it isn't a step-up from his Acer Chromebook.

This thing is huge.

Stacked against the Acer and my 15" Macbook Pro Retina, you can definitely tell it takes up a big footprint. 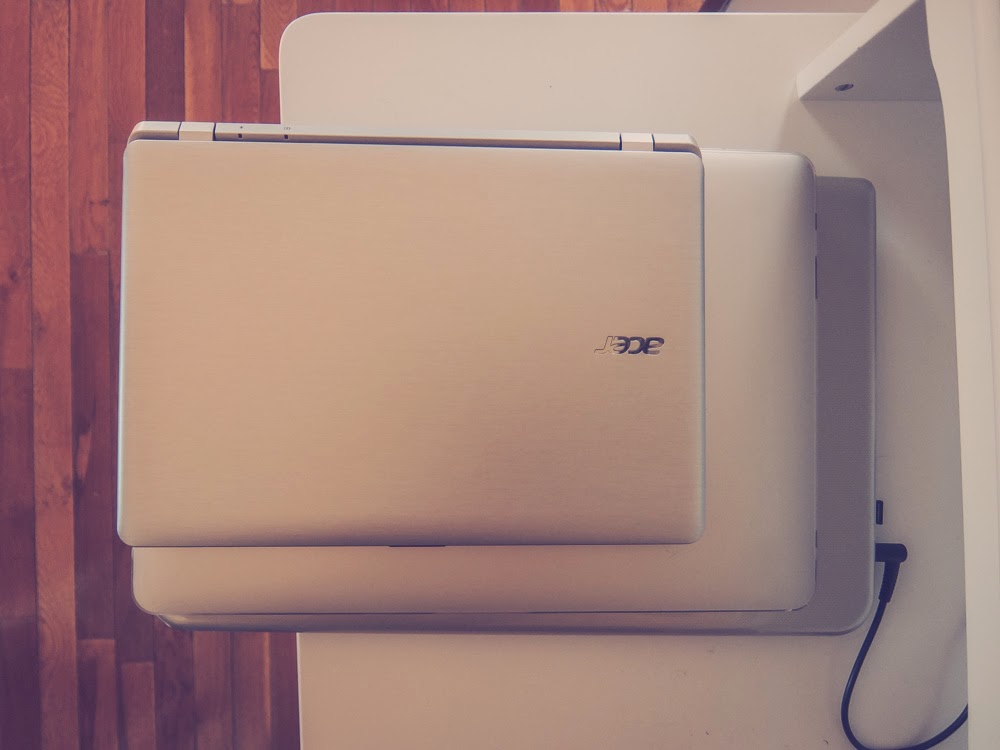 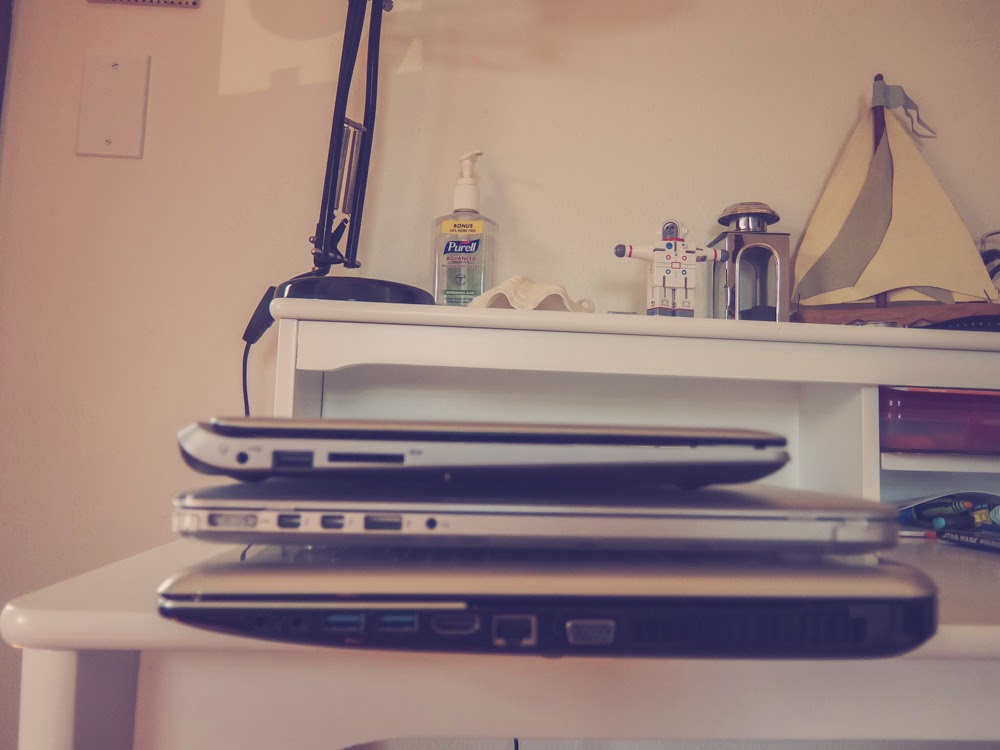 It is thick, the screen is fairly nice and it comes with 4 USB, VGA, Gigabit, HDMI and even a CD-ROM. It is definitely a desktop replacement. The screen is very good for the price. Colors are well saturated and viewing angles are decent for a regular TFT screen. Build quality is much better than the Acer. Skullcandy branded speakers give it some bassy boom. It is simply huge and I kinda like it. The fact it adds a numeric keypad in addition to full size keyboards tells you it is definitely a goliath.

The CPU is a Pentium 3558U and the passmark score on this is almost double of that on the Acer. Again, this is a more expensive retail laptop than the Acer so I'd expect it to be faster. The only downside is the 4 hour run-time. 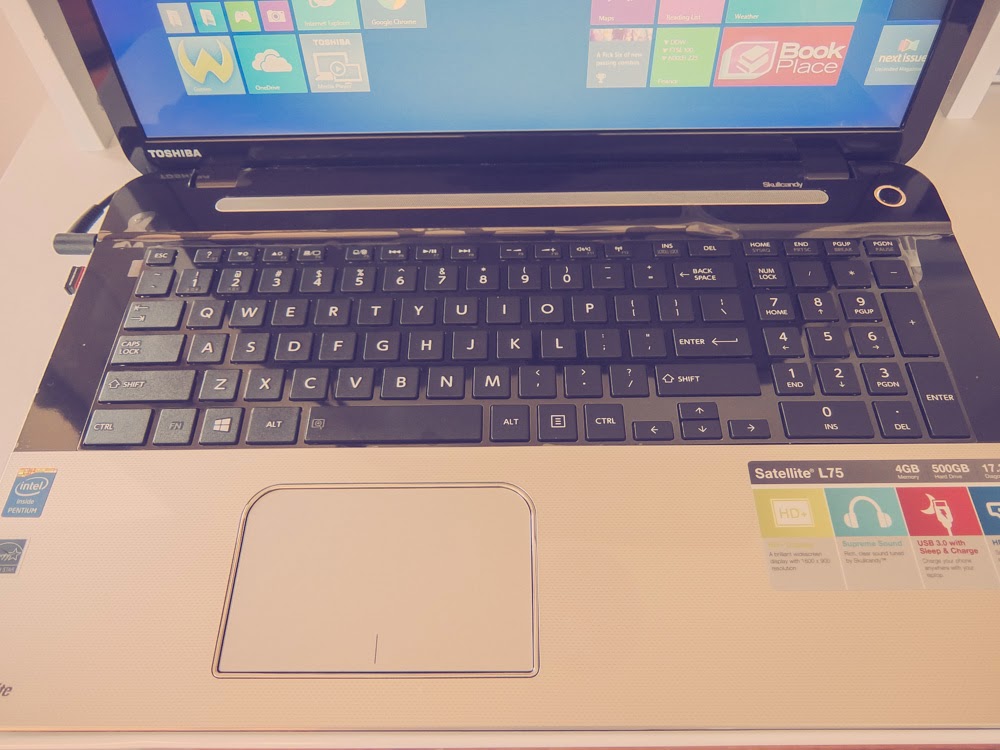 For a desktop replacement, my son loves it. It definitely dominates his little desk.

I, myself, prefer a 13 to 15" form factor but my boy simply loves his new computer. The kids love that big screen for watching HULU and Netflix. To him, this was a big step up from his 11.6" Acer Chromebook.  I like the fact that the RAM upgradeable to 16GB of RAM. Since this CPU runs at 14-15 watts, it would make a fine little, low-powered Linux server in the future.

For me, I am enjoying the $130 Acer 11.6" E3-111. I really like that fanless attribute and aggressive battery run-time. It has replaced the aging Samsung ARM Chromebook we use around the household for guests and living room lounging. Before getting the Acer, I was seriously thinking about getting the 11" Macbook Air at around $650-700 discounted (4GB RAM/128GB/Corei5). There are times I don't want to lug my 15" Retina and I like the portability of the 11" form factor as a companion device. I know the Macbook Air would be close to 8 times faster, but for now, I'm going to use this Acer while anticipating the rumored 12" Retina Air. You simply can't beat the $130 price proposition.

I don't expect to run Photoshop, Lightroom or anything heavy duty on these. My kid will be using Microsoft Office and his homework mostly resides on web pages.

It is amazing what you can get today on the cheap. Both of these laptops, combined, cost less than an iPad Mini Retina. That is simply mind-boggling. You definitely have to pay attention to sale pricing as I would never pay full retail for either of these.


Posted by fortysomethinggeek at 3:26 PM