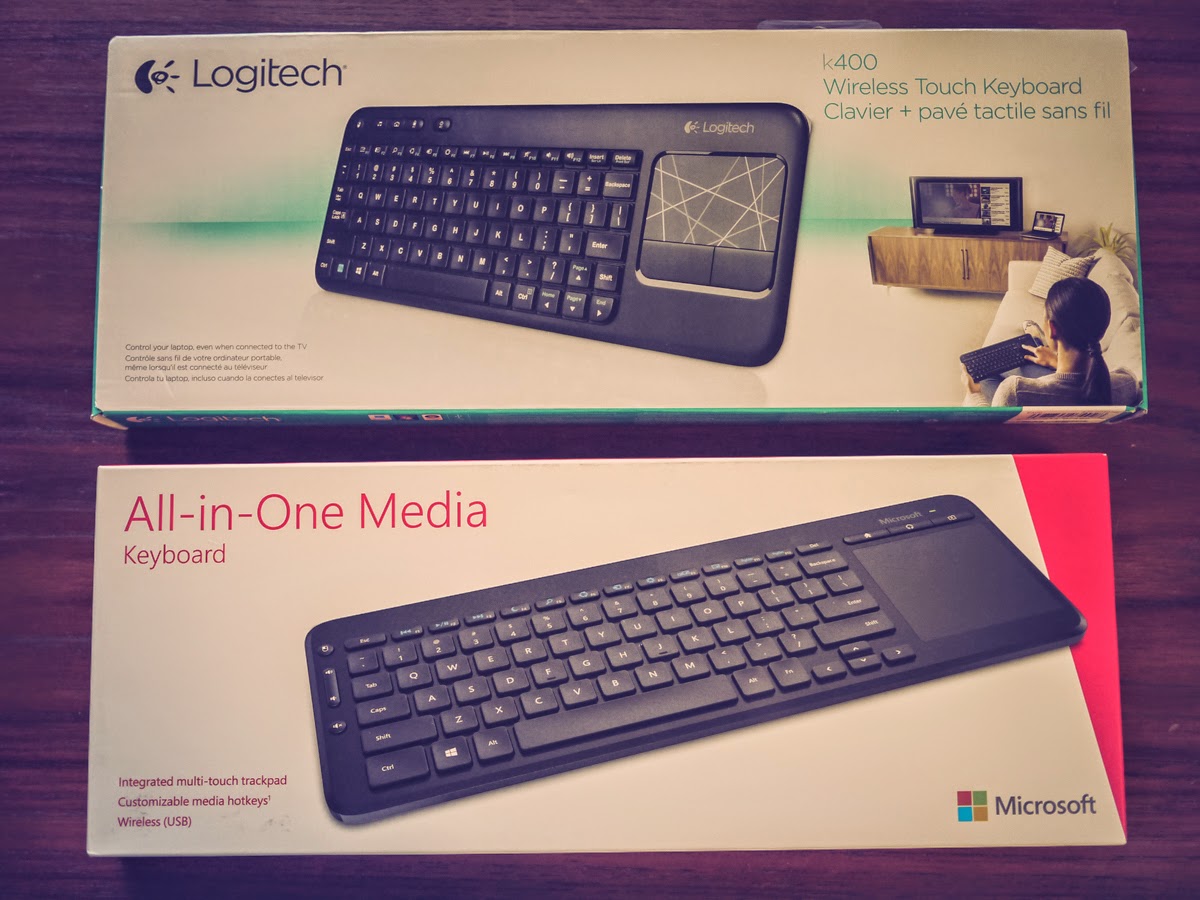 Microsoft released an All-in-One multimedia keyboard with a built-in Windows 8 friendly multi gesture  trackpad. It appears to be a good, alternative to the ever popular Logitechg K400. In fact, some have speculated that the Microsoft keyboard may actually be a rebranded Logitech or possibly built by Microsoft. I don't know if Logitech has any involvement but I can clearly say it is not a re-skinned K400. The K400s are often on sale for $20 -24 and the Microsoft often dips under $30 (the retail is $40).


I use the K400 because it is a very practical and useful keyboard to have when you are working in a server room or building out computers. Often, you are testing or computing in unusual and often cramp spaces. They can be use for HTPC and media uses. Thus, these tend to be real popular keyboards and they come in different colors. I happen to own multiple black and white K400s. 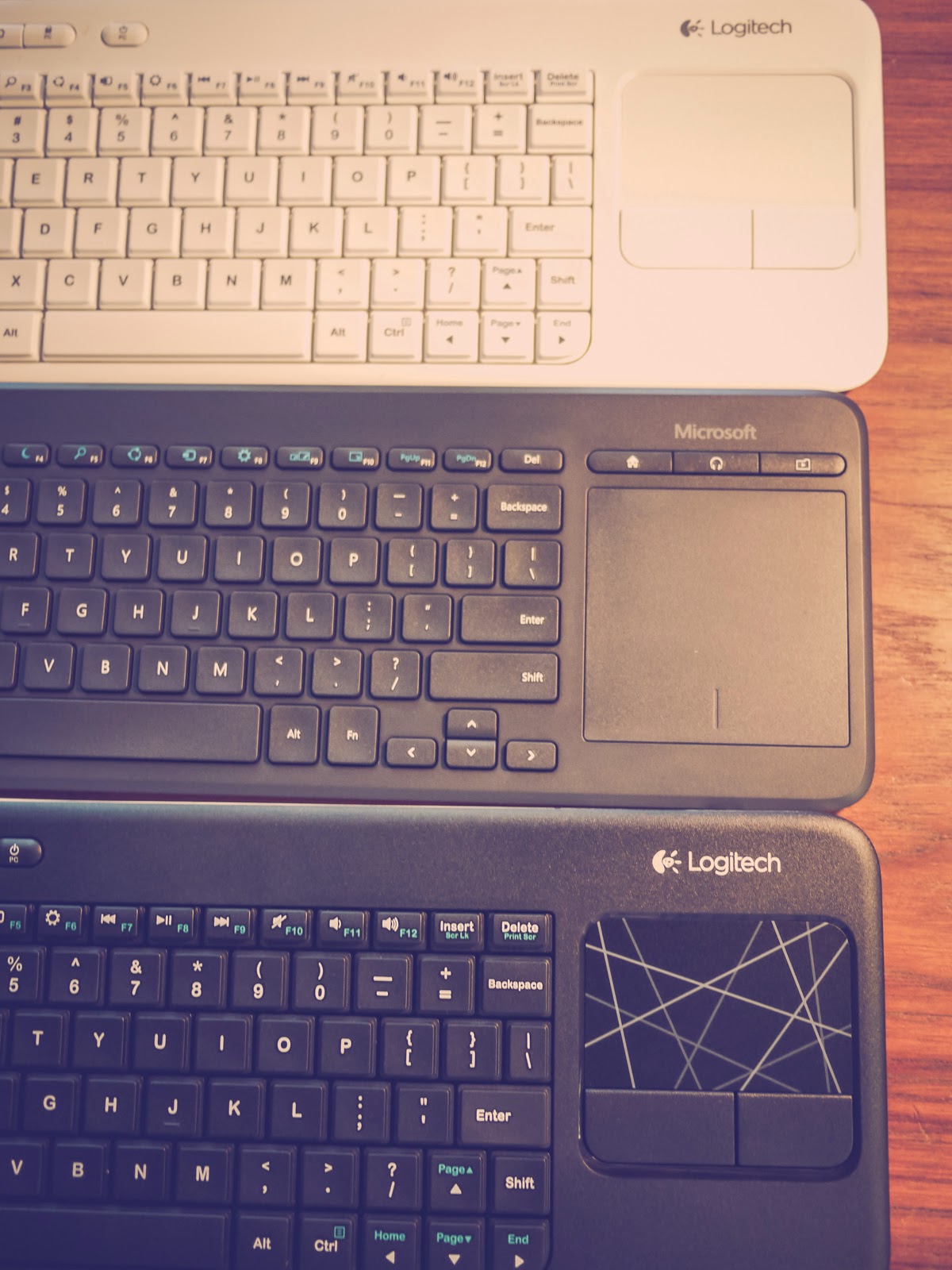 So how does the Microsoft keyboard stack up?

The Microsoft All-in-One is definitely a more stylish, contemporary looking gadget. The profile is slimmer and the design is more modern. Keyboard travel on both are iffy and I don't recommend neither keyboards for full time usage. The trackpad on the Microsoft appears to be bigger because it is a button-less design. 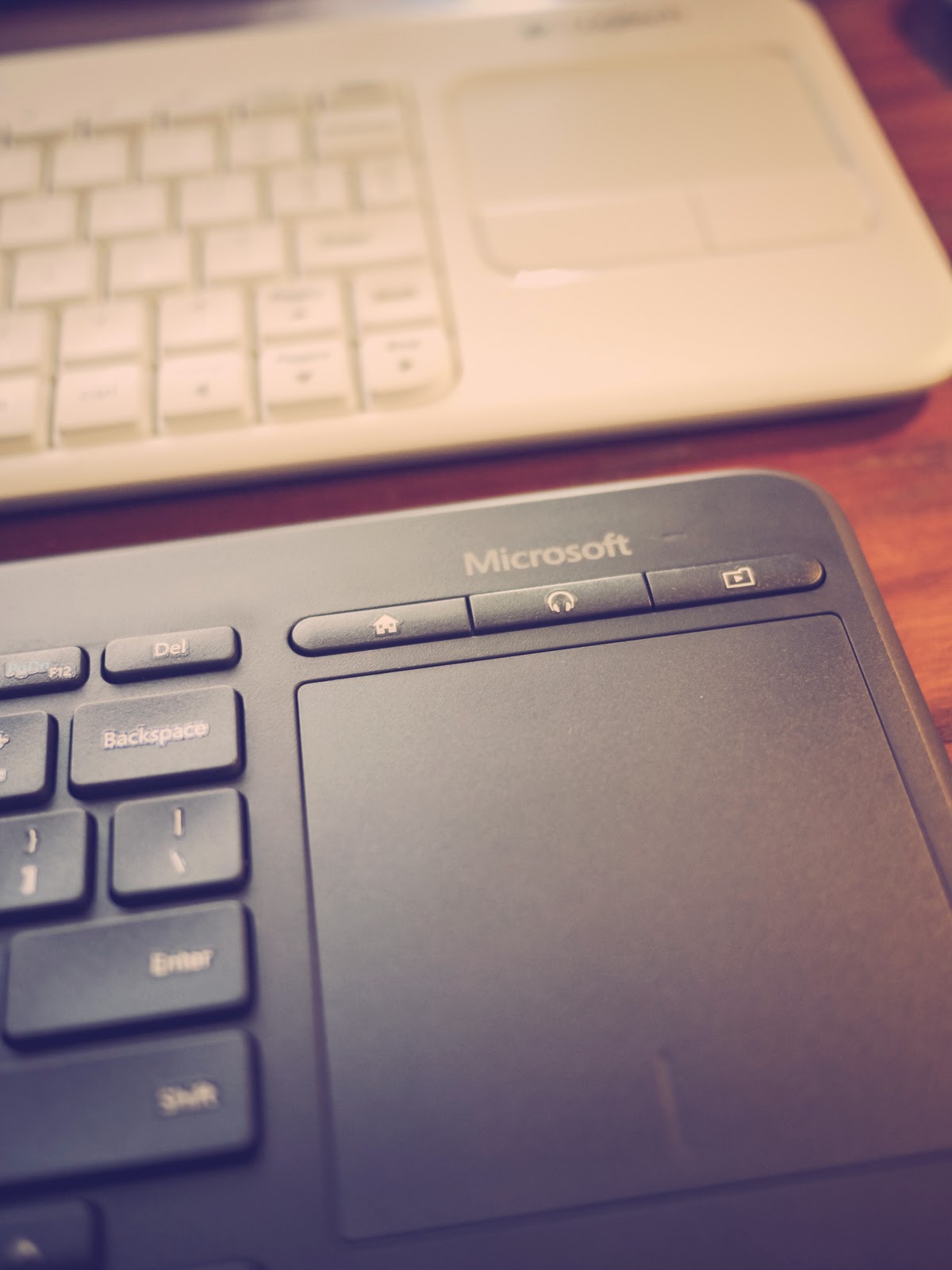 In terms of use, I think the Logitech feels better. The trackpad, in terms of movement, is very iffy on the Microsoft version. However, multi-gesture works better with the Microsoft. Range appears to be the same as I tested from 10 and 15 feet away with no problems. 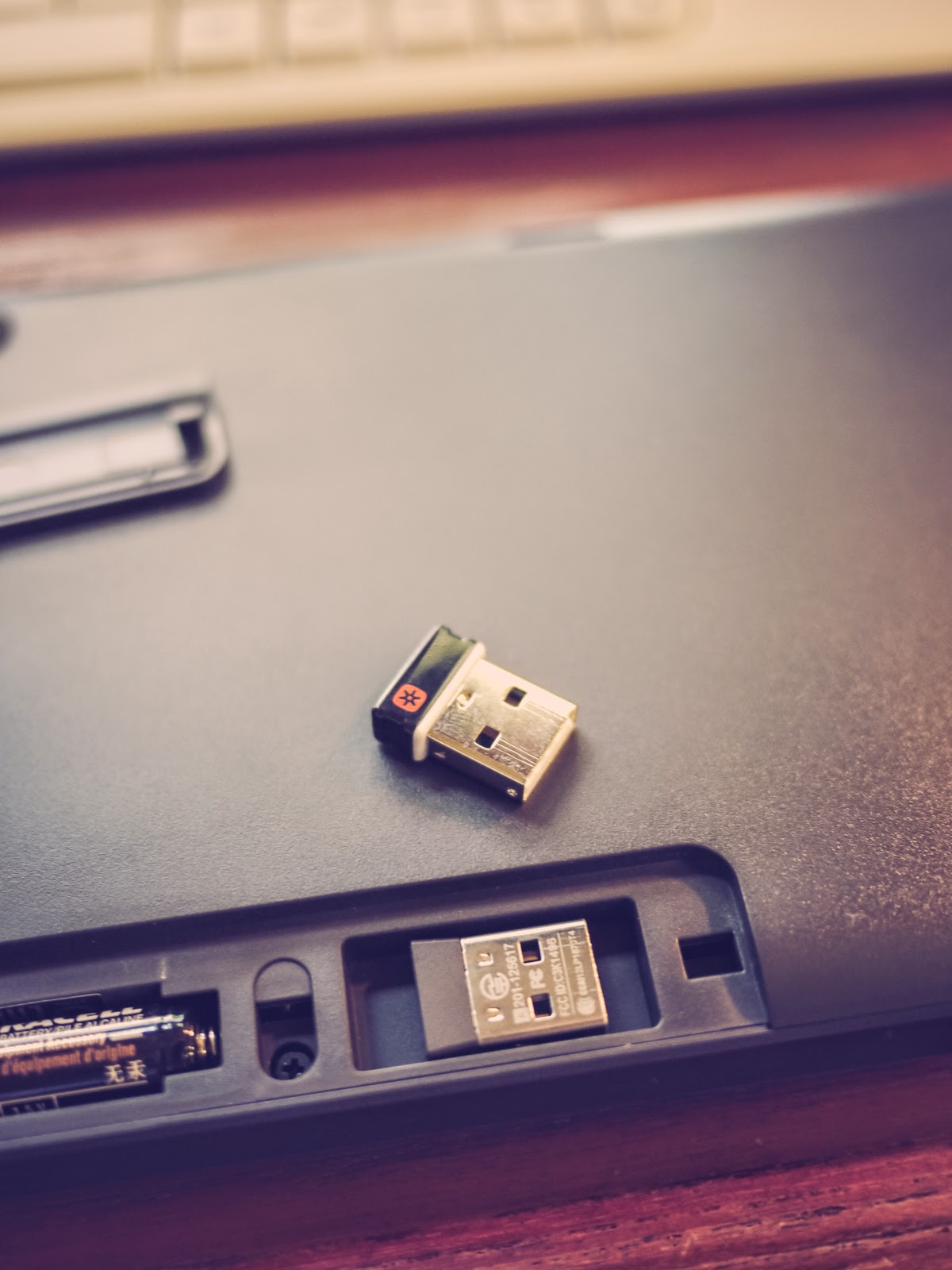 Both use dedicated USB dongles that can be stowed away when not in use. I like how the Microsoft has a magnet that holds their dongle in place. However, the Logitech has an ace in the fact that it uses a Unifying dongle. This means you can pare multiple Logitech keyboards and mouse to one dongle. I really like that feature as I often have a dedicated mouse I want to use in addition to the keyboard. It still isn't Bluetooth but I like the fact I can plug in a dongle into a Tablet or various Android sticks and NUC micro computers and be ready to go with a mouse. 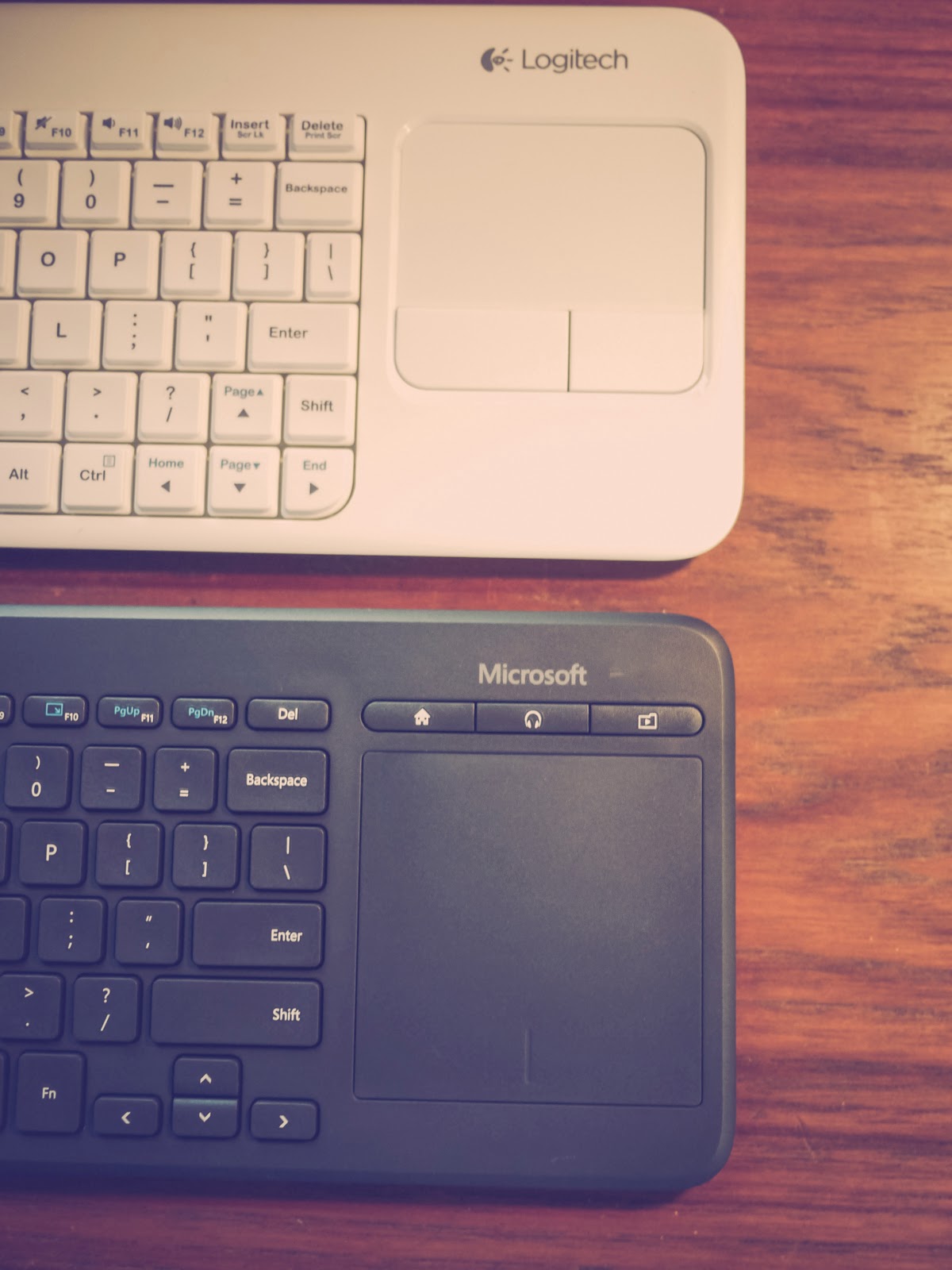 They both come in handy when I want to prop up my Dell Venue 8" Tablet and use it as a Windows desktop computer on-the-spot. The Microsoft trackpad does a fair job at scrolling and pulling up the Charms bar. Due to the slightly wider pad, the Microsoft has a slight edge. Zoom and pinch is still wonky on both and that is due to Windows OS itself. I still can't get that smooth of a pinch on any Windows trackpad. You still can't do 4-5 finger alternating swipes like you can on other operating systems. 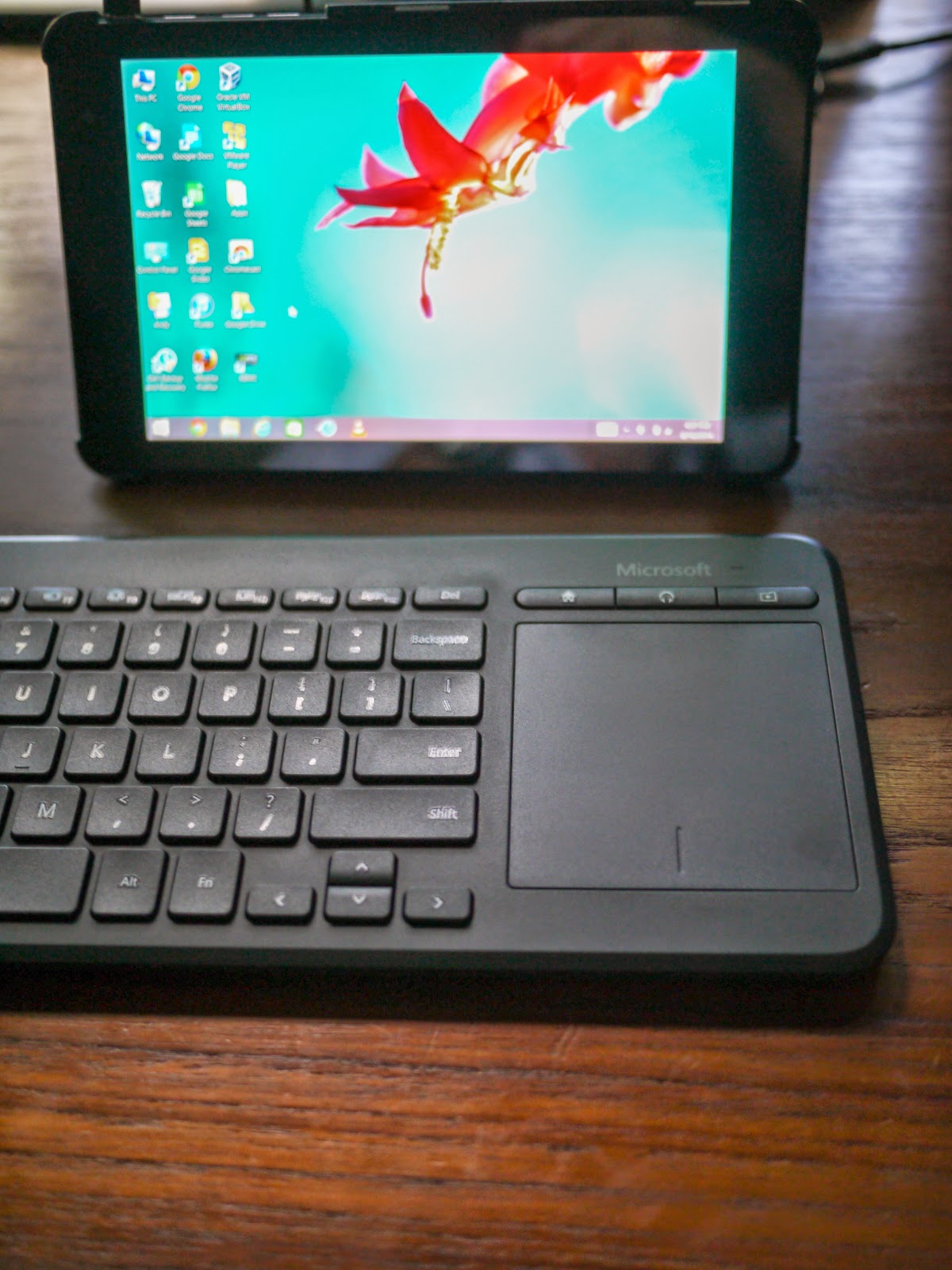 When it comes down to it, I will stick with the Logitech. The Microsoft keyboard lacks a dedicated HOME, END, and INSERT button. Those are deal breakers as I often use these keyboards in a text-only console environment; rebuilding or emergency boot fixing a Linux server. I also prefer the keyboard tactile feel of the Logitech over the Microsoft version. However, in my opinion, I think the Microsoft looks more handsome in terms of the styling. Lastly, the Logitech uses AA vs tripe A (AAA) batteries on the Microsoft. 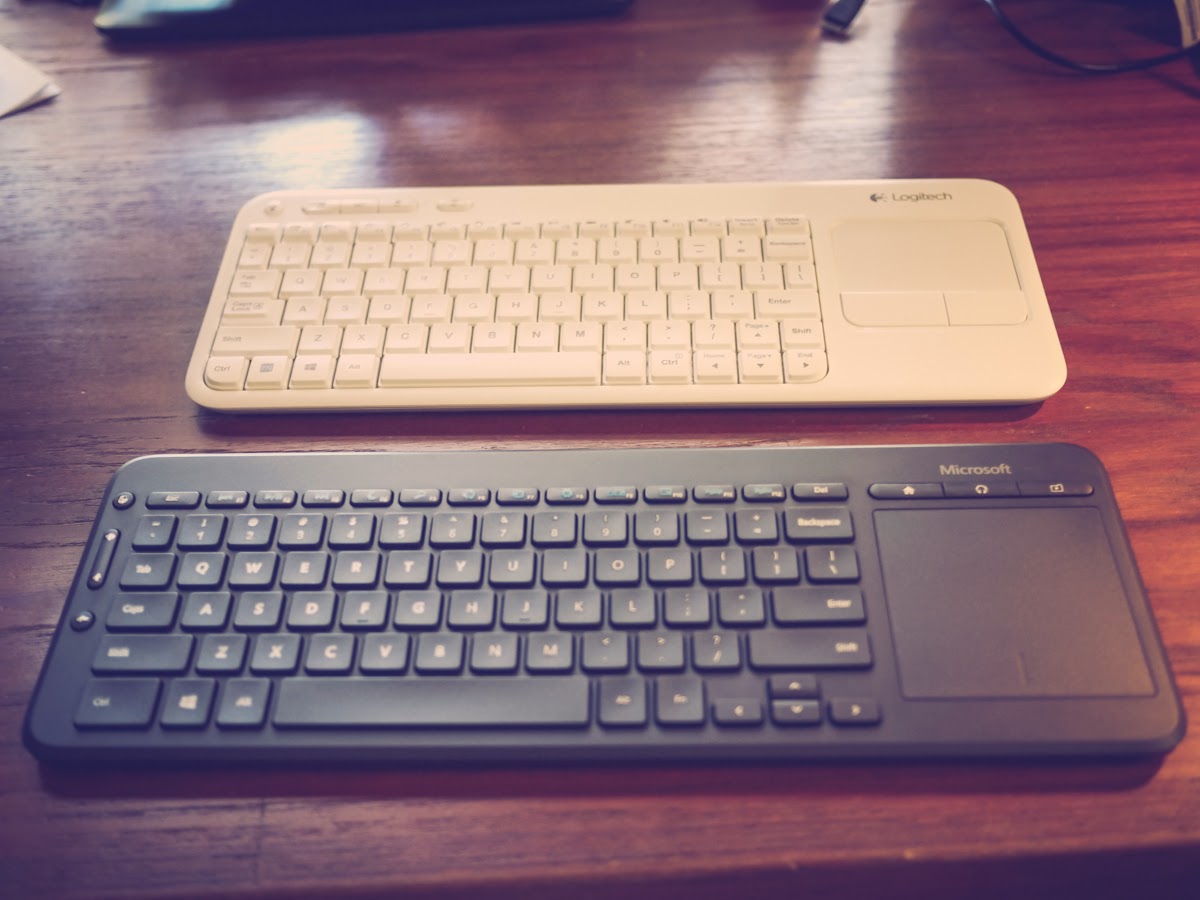 Posted by fortysomethinggeek at 3:29 PM