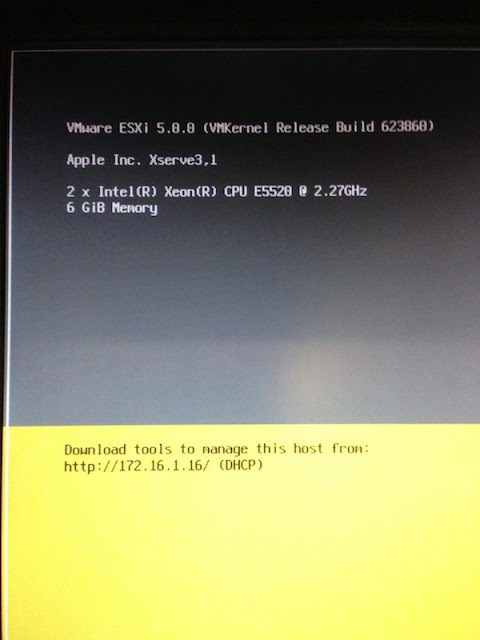 A few post back, I wrote about converting real physical Macintoshes into VM (Virtual Machine) guests. Today, I am going to blog about my first attempt of installing VMware ESXi 5 hypervisor Virtualization server on a 2009 Apple Xserve 3,1. This was the last Xserve before Apple discontinued the line.

The purpose of this exercise is to see if I can recycle some old Xserve to hosts and consolidate older Mac OSX servers running Quicktime and Indesign services.

Installation was a breeze. I had an ISO and hit the "c" key at boot and selected the CDROM. Installing ESXi 5 was no different than installing it on a Dell. I picked a 8GB USB stick and installed everything onto a bootable USB stick. Once prompted to reboot, I had to hit the option key to choose the USB stick which happened to be properly EFI made. 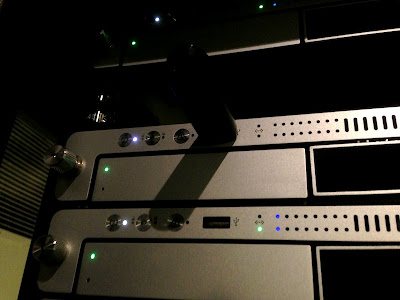 I then configured my IP and logged into the Xserve through the VMware view client. I couldn't format one of the disks from the Xserve's SAS bay. VMware recognizes and it probably has some baked Apple firmware on it. I'll try with a different disk later. However, I was able to mount iSCSI and NFS shares to test. 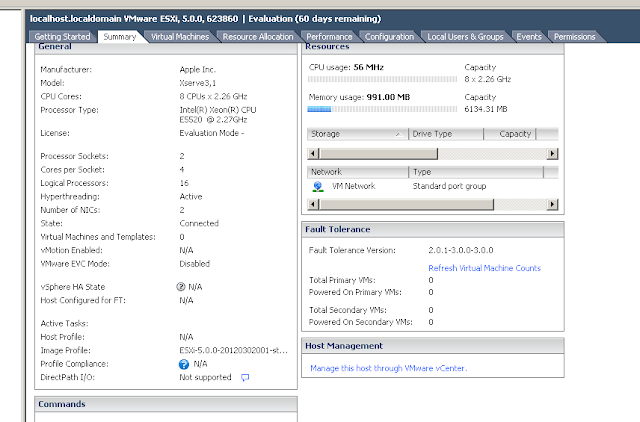 I was able to load up my Linux and Windows VMs with no hassle. Getting a OSX guest will take me some time to figure out. I converted a Fusion guest with the ovftool but was not able to install my guests. I will play with it more and report back.

Right now my Xserve only has 6GB of RAM so I'll need to max that out and try adding eSATA or SAS storage to the ESXi build. My Xserve has an internal 128GB  boot SSD so I may try re-installing on that or create a datastore on it.

Posted by fortysomethinggeek at 9:09 PM