I rarely post camera stuff on my blog and if I do, it must be pretty compelling.
Today, Blackmagic announces a new Pocket $1,000 digital camera with a MFT mount (Micro Four Third mount). 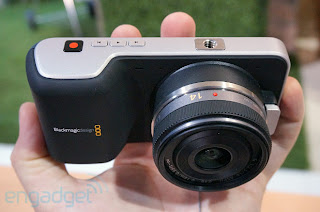 Wow. MFT is one of the early pioneering non-mirror interchangeable lens format by Olympus and Panasonic. It is good news to see a new player in MFT. Blackmagic's reputation in Hollywood circle will only help elevate MFT as a prosumer digital video solution. There are also another 4K camera they announced as well.

Engadget has some early hands-on from NAB show.

Posted by fortysomethinggeek at 10:02 AM