Old school geek and his watches

Watches is another interesting subject for this geek.

Today, one of my regular geek blog, Gizmodo, has an article on Chronograph watches. It show cases a nice Heuer, old school Rolex Daytona, and an Omega Speedmaster Professional. It is kind of light on content. An introduction to Chronograph should explain some of the features. For example, the Tachymeter and how to use it. Not all Chronographs have Tachs. The watch I am wearing today is a Sinn 156 Military and does not have a Tach. It is a military watch with an unusual dial arrangement fitted with a Lemania 5100 automatic complication. It also has a 24h our sub-dial which leads to an interesting subject of discussion for watch geeks.  In short, there are different chronographs of all sorts.
So, I was a bit disappointed in the Gizmodo article. 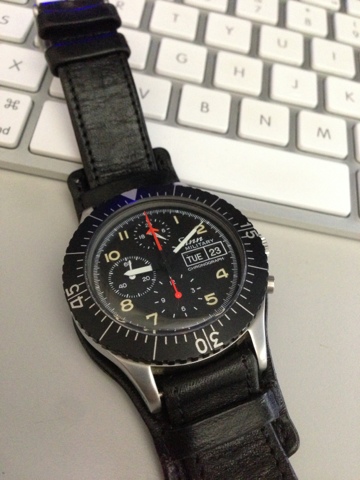 However, today is a good day to profess my love of mechanical watches as a geek.

First of all, watches are oldest form of gadgets for the gentlemen. You have a hundred moving parts that require high precision and tolerance. Like most 30,40 something tech geeks. I started my watch habit during the dot-com era. When money was flowing, I was buying a high-end time piece every 3 months and spending my time with other dot-commers on timezone.com.

I was always a big fan of NASA and astronauts in general. Buzz Aldrin was my hero so one of the first watches I got was an Omega Speedmaster Professional. Notice in the second picture below, Aldrin is wearing his Speedmaster professional strapped outside his spacesuit in m*therf*cking outer space. How cool is that. That watch can take a serious beating as it passed many tests by NASA. 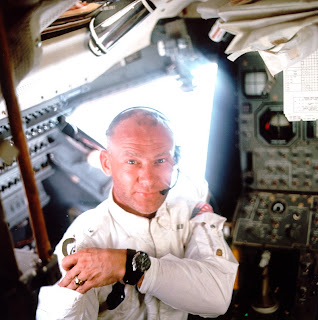 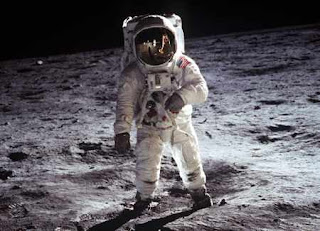 Over the years, I collected a great deal of watches, My entire collection is mostly "tool watches." 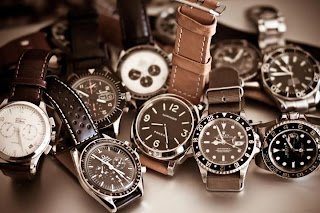 Tool Watches are worn by professionals (NATO pilots, astronauts, bomb squad,exploreres)  and most of them are military watches or ones used by adventurous types. I'm one of those collectors you can call a "Desktop diver." I have diving watches that can go 300 to 1000 meters deep but the deepest I'll go is a 9 foot pool. I have no biases like some (Omega vs Rolex). I collect them all.

In this day an age, most people ask why do I still wear a watch when you can get your time off a phone or computer. Well, I have two good long answers for this.

1. Appreciation. I don't think of watches as an investment but all of my watches have doubled or increased in value. The Sinn 156 pictured above can no longer be bought. It has a rare Lemania movement sought out by others. I can easily sell it for three times what I bought it for. In 1996, I traded an Apple Wall Street Powerbook (worth $600 at the time) for a rare 168000 Rolex Submariner. The laptop is worth $80-120 on eBay today.On the other hand,the Rolex Sub is worth over $6000 in the secondary market. It is highly sought after by Japanese collectors due to the fact it was a transitional model (matte dial pre-lumia). In 2001, I bought a brand new Rolex GMT Master II for $2700. To buy one now will cost you over $6000. The Speedmaster professional you see Buzz Aldrin wearing, well, I bought one brand new in Europe for $1200 in the early 2000. Today, speedmaster "moonwatches" still fetch over $3,000. In short, electronic gadgets will depreciate faster as the next and greatest item replaces it. Unless you have a rare first edition Apple II, electronics are disposable gadgets. My watch collection is a family heirloom I can easily pass on to my kids.

2. Doesn't need a battery. Very simple. I realized how important this was early this year when I was hospitalized for a few days. I had my iPad, laptop, phones and they all died on me on the first day. I was constantly asking nurses to borrow their phone chargers. In the end, all my electronic gadgets died on me. Waiting and waiting for hours in the emergency room for the next blood tests, the only thing keeping me sane was measuring time. I would wake up in the middle of the night and my wristwatch was the only thing that kept me in check with the reality of the world. Knowing what time it was, I could easily meditate myself to sleep; knowing I didn't have to stay awake for 3 or 4 hours. I'm surprised my hospital didn't have wall clocks.

There you have it. Watches and why this old school fortysomething geek plays with them.
And those talks of iWatches, I won't be buying one. Digital watches will never have the same breadth of cool as any mechanical watch.

Posted by fortysomethinggeek at 9:43 AM