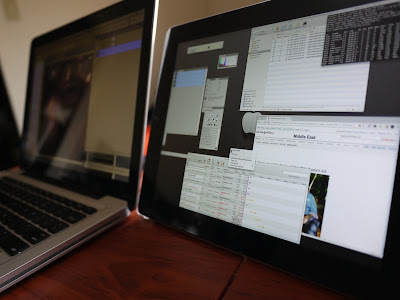 I've been thinking long and hard about what would motivate me to upgrade to the next iPad. Media outlets are reporting the spiraling decline of PC sales as consumers are no longer upgrading their PCs every other year. Why upgrade when your existing computer works just fine. There will be a point when people will be genuinely content with their existing mobile device and do not feel the urge to upgrade their tablet every generation.

There is one killer feature I would like to see and that is Target Display Mode on the iPad. The picture above is an iPad using Wi-Fi video tethering to act as a secondary extended display for my Macbook. I'm running HiDPI mode so I am in essence getting a portable cinema display with the same desktop real estate as my 27" monitor.

Target Display Mode would take it to the next level as it would be a physical connection.
Many of the Macs have it and it will be a compelling feature to sell more iPads. If there is something that would push sales, a new unique hardware feature is all that is needed. Target Display Mode is a feature that allows iMacs turn themselves into secondary screens for other macs.  Hence, this is not a far fetched idea. Apple has already done it in the past. If Apple ever implemented this, I would immediately plan to upgrade to the next 128GB LTE version and get myself an additional low-end 16GB wifi only.

I've thought about this feature long and hard when I got my GeChic portable HDMI MHL monitor. I've also used Wi-Fi video tethering apps and then I ordered myself a discounted Motorola LapDock for hacking purposes. The LapDock has been known to be re-used as secondary displays.

There are even companies abroad selling the same size 9.7" iPad 2 LG displays as portable MHL monitors. 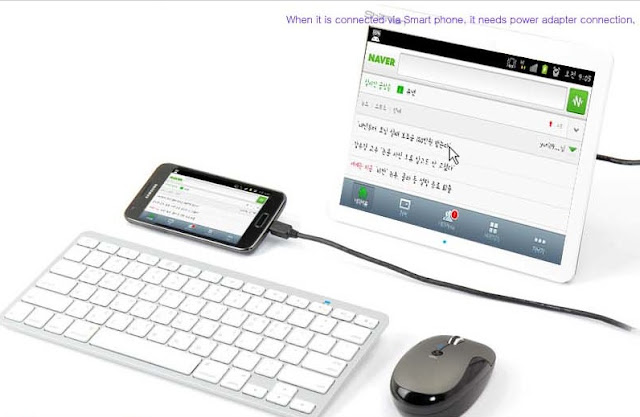 Now, wouldn't it be awesome if there was an HDMI to Lightning dongle that provided video input. With an app or system preference,the iPad can toggle itself into a monitor (ala Target Display Mode). I know many pro-photographers and videographers would snap up extra iPads to use as remote displays. I know a lot of road-warriors would definitely pick up a new iPad just for this feature. This and this alone is a big bullet selling point.

Heck, make the HDMI dongle expensive to recoup the R/D cost. I'm willing to pay for it. I doubt Apple would embrace MHL but I figure 3rd party accessory makers can jump in with a white MHL-to-HDMI/Lightning adapter.

Someone at Apple, please make this happen! Please give the next iPad HDMI input / video-in.

Posted by fortysomethinggeek at 12:23 AM